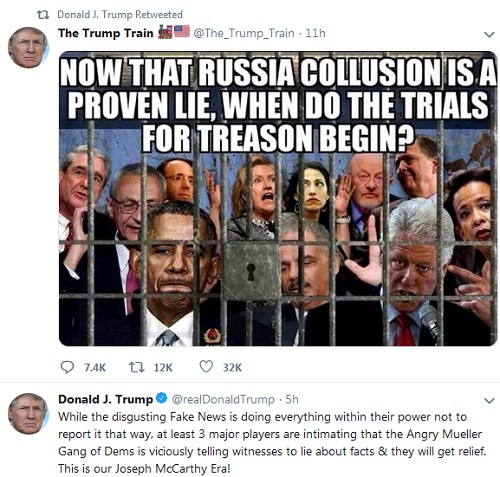 When I first saw this Treason Meme all by itself on Drudge ereyesterday (11/28), I thought it was a funny spoof.  Then I checked Trump’s twitter feed and my jaw dropped.  POTUS himself posted it!  Whoa, Nellie.  This is deadly serious, no spoof.  And about time.

That’s quite a lineup.  Two former presidents, one of their execrable wives with her girlfriend Huma and hitman Pervert Podesta, both of Zero’s Attorneys General, his Intel and FBI chiefs, plus the Evil Duo of Mueller and Rosenstein.  The President of the United States is saying they all belong behind bars.

Which they do.  And so many others.  Where’s “Commie John” Brennan?  Slimy Andy McCabe? Where’s Facebook’s Mark Zuckerberg and Twitter’s Jack Dorsey?  Guess there was no room for them in the meme, not to mention the reporters and editors of CNN, WaPo, New York Times, and others of the Fascist Media.

It’s going to be a very crowded jail cell.

Okay, okay, true enough.  But when is something going to actually happen, something actually done instead of words in tweets?  Not a single one of the scumbags pictured or named above are behind bars today, which is one primary reason voters gave Dems a House majority in disgust.

Right now there’s this big media flap over Comey refusing a Congressional subpoena, even going to court about it.  Who cares??  The real question is:  When is the spineless squish Trump DOJ going to indict him and make its best effort to imprison him??  Or anyone of the “subversive crimes” committed by Democrat slimeballs?

Waiting for this to happen is really starting to be like Waiting for Godot – who, as we all know, never arrives.

It may even be worse.  Last night (11/29), the DC reported: FBI Raids Home Of Whistleblower On Clinton Foundation.

“FBI agents raided the home of Dennis Nathan Cain, a recognized Department of Justice whistleblower who privately delivered documents pertaining to the Clinton Foundation and Uranium One to a government watchdog, according to the whistleblower’s attorney.

The Justice Department’s Inspector General Michael Horowitz was informed that the documents show that federal officials failed to investigate potential criminal activity regarding former Secretary of State Hillary Clinton, the Clinton Foundation and Rosatom, the Russian company that purchased Uranium One, a document reviewed by The Daily Caller News Foundation alleges.

The delivered documents also show that then-FBI Director Robert Mueller failed to investigate allegations of criminal misconduct pertaining to Rosatom and to other Russian government entities attached to Uranium One.”

The FBI agents conducted the raid under the pretext that Cain possessed “stolen federal property,” i.e, documents he had already provided to IG Horowitz who had given him protected whistleblower status under the Intelligence Community Whistleblower Protection Act.  Informed of this, the agents conducted the raid anyway and rummaged through his Maryland home for six hours on Nov. 19.

This can only mean that the FBI is determined not only to never investigate Clinton and Mueller criminality but to stifle with agents and guns any effort to do so.  Either this was done with Trump-appointed Director Wray’s approval or rogue without.  Whichever, it is becoming ever clearer that the FBI itself is complicit in the “subversive crimes” POTUS wants investigated.

Please, President Trump.  No more words, no more tweets.  We need deeds, definitive action to root out the rot in the FBI and DOJ, to indict, prosecute, and incarcerate those engaged in criminal acts against the elected presidency of the United States.

The same goes for Building the Wall.  We’ll ignore Ann Coulter’s unhinged rant this week about Trump’s wall becoming a “stall” because it’s so stupid it’s not worth linking to (I read it so you won’t have to).  Byron York at the Examiner is another matter:  Why Not Build The Wall?  It’s the Law (11/26).

“It required the federal government to build reinforced fencing, at least two layers deep, along about 700 miles of the border. It specified the areas in California, Arizona, New Mexico, and Texas where fencing would be installed,” he notes.

It was toothlessly amended in 2007 to say the President could only authorize it if he deemed it the “most appropriate” way to defend the border – which PDJT could instantly do as Public Law 109-367 is still the law of the land.

POTUS says he needs $25 billion for the Wall.  But why does he need Congress to appropriate it – or threaten a government shutdown if the current lame-duckers don’t give him a $5 billion starter kit next month?

Obama gave Iran’s Death-to-America Mullahs $33 billion in cash and gold with no approval from Congress whatever, nor a single Dem complaint.

All Trump has to do is declare he is acting under the Secure Fence Act Law, that it will be funded with Pentagon money as a matter of defense and national security, it will be built by the Army Corps of Engineers in cooperation with Israeli contractors who build the best defensive walls – and all efforts of judges and lawsuits to stop him will be ignored until adjudicated by the Supreme Court – with enough delays to be sure the Wall is completed before that happens.

Done deal.  Finish it before November 2020 and his reelection is reassured.  (Okay, that and Federal Election Day Photo ID Voting Only is also in place.)

Again – please, Mr. President, action, do it, full speed ahead and damn the torpedoes!  We don’t need more words.

Just to be clear, this is not to criticize El Donaldo who has come to America’s rescue in the early 21st century as did Ronaldus Magnus in the late 20th.  It is to emphasize the critical urgency of where we are at this moment.

The impending Dem onslaught against America, starting on January 20th , the instant the Fascicrats gain the House, has to be stopped in its tracks right now, immediamente.  It’s far past time to go on the offensive.

Early this afternoon (11/30). Fox ran: Trump team fires back at Mueller probe, ‘hysterical’ coverage of Cohen deal.  Who cares?  No more “firing back” – fire Mueller, put an end to the entire fascist farce, who cares if the Fascist Media scream to the moon and the Fascicrats vote to impeach?

Yes, it takes a simple 218 Fascicrat majority to impeach – but on Wednesday (11/28), Trump warned them how lunatic that would be: Trump threatens to declassify ‘devastating’ docs about Democrats.

And so what anyway?  An impeachment is merely the indictment. The actual trial is held by the Senate, which a guilty verdict requires a 2/3 or 67 vote majority.  Good luck with that, as the 116th will have 53R-47D.  So all Dem impeachment talk is urinating into the wind.

It’s actually been your motto all your life – now is the time when you need it the most.

It has to be a Full Court Trump Offensive.  One target, in addition to the Fascicrats and the Fascist Media, has got to be Zuckerberg/Dorsey.  As Saul Alinsky advised, make it personal.  These two, who run Facebook and Twitter, are fascisti.

The latest morally depraved insanity of Dorsey, for example, is Twitter’s ban on “Misgendering” and “Deadnaming.”

“‘Misgendering’ refers to the deliberate decision to refer to a ‘transwoman’ as a man, and ‘deadnaming’ is the practice of calling a ‘transperson’ by their given name, rather than the name they now choose to identify as. For example, the sentence, ‘Bruce Jenner was a great athlete – he won an Olympic gold medal for the Decathlon.’ would break both of those rules, and get someone banned off of the site for doing so.”

So here’s a question:  What prevents your phone company like Verizon and AT&T that connects your cell phone to the world from doing this? 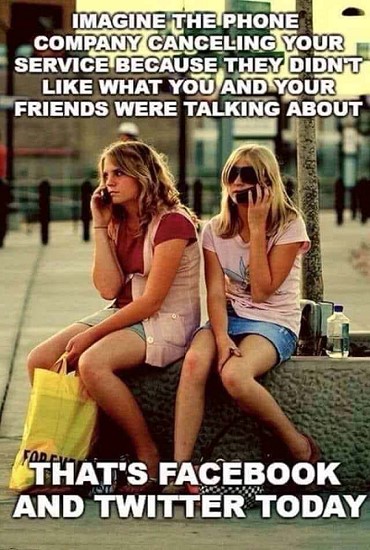 The telcos can’t because they are legally prevented from doing so as public utilities.  POTUS needs to have the FCC do the same to  Facebook and Twitter today right now without delay.

If millions of conservatives tweeted “Jack Dorsey has a penis, therefore he is a man, not a woman,” and posted on FB, “Mark Zuckerberg is a heterosexual man and not a transgender who has a penis not a vagina,” it might crash both with the banning enough to teach them a lesson in moral reality.

Okay – can we have some fun now?  Let’s start with this: 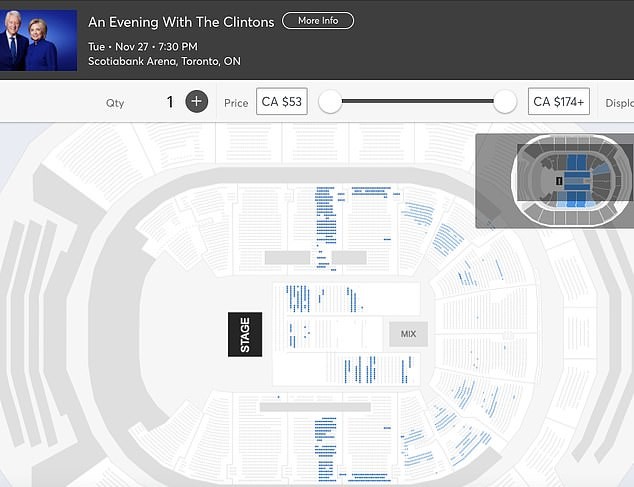 This is a schematic of how many seats were filled (in blue) at the “Evening with Clintons” event in the ScotiaBank Arena in Toronto, Canada on Tuesday (11/27).  Nobody cares about these two whining has-beens, even in Canada.

The frosting on the cake is The PIAPS suffered a massive coughing fit during the event.  She may never make it to 2020.

Friday November 30 (today) is Portrait Day at the Supreme Court.  The official portrait shows Justice Kavanaugh beaming with Justice Ginsburg the opposite.  It’s gone viral.  The future is bleak, isn’t it, RBG?  Sorry, Amy Coney Barrett is your future. 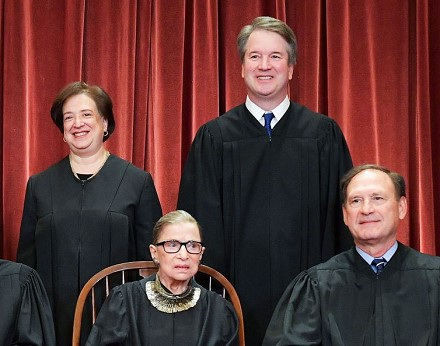 On Tuesday (11/27), The Incredibly Shrinking Man – Thank-God-Former President Zero – took total credit for America’s oil boom he did everything to impede and destroy.

Yesterday (11/29), former president of Shell Oil Company John Hofmeister said former President Barack Obama had nothing to do with America’s increased oil production and actually frustrated many areas of the energy sector.

Another reminder that this schmuck will go down in history as the most ridiculous mistake American voters ever made. 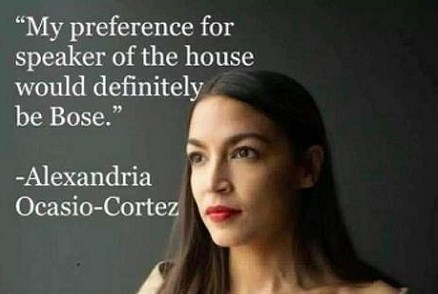 It is gratifying in the extreme that Brazil’s new foreign minister, Ernesto Frago Aruajo, has publicly denounced global warming “climate change” as a “Marxist hoax.”

TTP has been explaining for years how Warmism is not legitimate science but a political agenda of the Left, the replacement of failed Soviet Union Marxism as a rationale for totalitarian control over people’s lives.  Glad to see Brazil’s new leaders agreeing.

Of course the Fascist Media hated it.  It’s frankly a shame you can’t shoot libtard journos in the head but it’s why can’t some patriotic billionaire buy out their employers and fire every one of them?

As the DC said on Tuesday (11/27), Don’t Listen to the Haters, Melania’s Decorations Are Perfect.  O course they are.  More than perfect, in fact.

What triggered the Fascist Media in particular were Melania’s Red Christmas Trees in the White House East Colonnade: 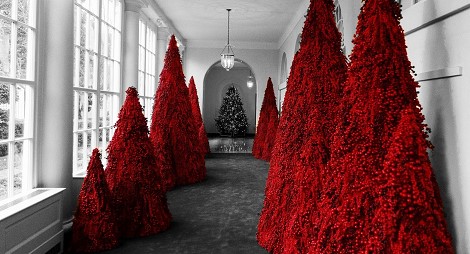 They are beautiful, but somehow Trump-deranged journos thought they were Christmas from Hell.  Truth is, the Fascist Media are from Hell.  Melania is from Slovenia in Eastern Europe.  This is what her red trees actually signify: 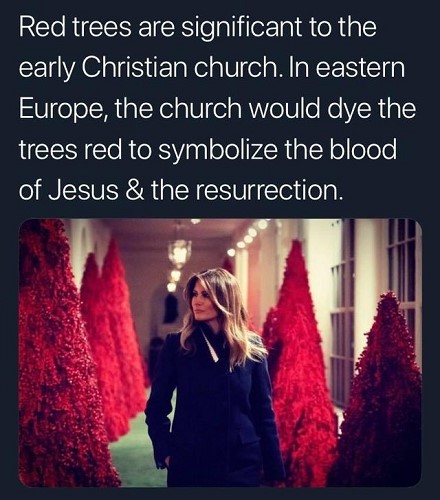 The Fascist Media’s reaction to this is a lesson in the depth of their evil ignorance – and how we must all strive to triumph over it.

We’ll close with what Vanity Fair – a PC mag of the Left – has to say in their current issue (yesterday, 11/29) about : Inside the Strange World of Conservative College Women.

“Young Republican women are aggrieved, outnumbered, defiant. And they aren’t going to apologize for loving the guy in the White House” is the subtitle.  The writer tries to be sympathetic but can’t overcome her libtard smart-assness.  Nonetheless it’s a compelling must-read.  One quote while at the University of North Carolina at Chapel Hill:

“‘It’s really hard to date here,’ said Gabby Derosier, 19, a sporty, dark-haired girl who was sitting at a wrought-iron patio table eating a hamburger. ‘Liberal guys match with me a lot on Tinder because they like to argue. I put it right in my profile that I’m a conservative woman. But then they kind of want me to be like the guy in the relationship and . . .’ She made a face. ‘I like a man to be a man—like a lumberjack. Liberal guys are really feminine’.”