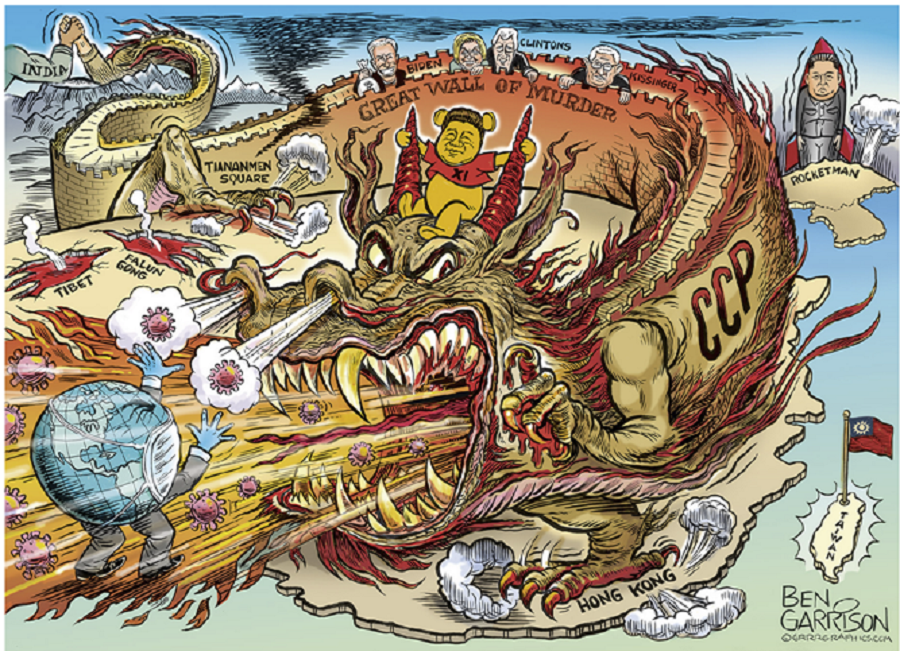 This brilliant cartoon of Ben Garrison, which he entitled China’s Great Wall of Murder, goes a long way in explaining why the Chinese Communist Party is the greatest enemy of all mankind, not just Americans. Chicom China is The World’s Curse.

Garrison pokes fun at Xi as Winnie the Pooh (banned in China for making fun of the resemblance) at the controls of the CCP Dragon, but is deadly serious otherwise.  The CCP stomps out freedom from Tibet to Hong Kong, commits atrocities like Tiananmen Square, pollutes the globe with coal soot, casts its hungry commie eyes on Taiwan, and infects every country on Earth with its manufactured Chicom Virus.

And all this with the help of Mao’s buddy Henry Kissinger, Xi’s buddies the Clintons, and Xi’s puppet Hunter Biden’s daddy.  Yet the Red Chinese Dragon is even more evil than this.  To see why, we’ll visit the Health Ministry of Spain.

Below is a current (11/19) world map on the Spanish Government’s Ministry of Health (Ministerio de Sanidad) website, designating the Entry And Health Control Requirements In Spain, Depending On Your Country Of Departure.  Countries in red are “High Risk” with strict requirements for entry including a certified vax certificate.  Counties in green are “No Risk” having no such requirements.

Yes, China is “No Risk” – even with Reuters and Bloomberg reporting covid outbreaks in cities and provinces across the country this month.  There is only one reasonable assumption for this:  Spanish authorities in charge of this policy are on the Chicom payroll.

This is a practice well-honed by dictatorships.  The Saudi government has had bureaucrats, politicians, and journalists in European countries and the US on their payroll for many decades to never do or report something critical of it.  Putin’s Kremlin did the same to block fracking, especially in Europe – even using rent-a-mobs for mass protests against being free of Russian monopoly control of keeping them warm in winter.

The Chicoms are doing the same now regarding vax mandate fascism – in the US via their blackmailed stooge in the White House (and who knows how many of his top aides or “handlers” being taken care of with untraceable accounts in Macau banks), and all over Europe.

On Sunday (11/14), the Austrian government ordered a nationwide lockdown for anyone unvaccinated over 12 years old.  Lockdowns of over-12 unvaxxed were imposed this week in ultra-vaxxed Ireland (93% vaxxed), Holland (83%), Czechia (60%), Germany (68%), with more to come.

All of these countries’ governments are lying through their teeth in claiming the rise in covid hospitalizations are due to the unvaxxed.  Ireland is the poster child for this – no way to blame 7% unvaxxed for huge recent outbreaks, especially as many of the 7% have already had covid and are naturally immune.

What is going on with this pathological vax mania?  Chicom bribery is virtually ubiquitous, among the global media in particular – but the other main reason is why people are in government in the first place, as bureaucrat, politician, or appointee.

Lower echelon types can be in it just for a well-paying sinecure for no work of any substance, appointees for perks and prestige.  The real lure, however, for them all is power, the power backed by government guns to order people around and control their lives, which gives them a frisson of excitement that’s almost orgasmic.

That’s why the Chicom Virus is their dream come true, an ultimate pandemic of fear handing them the permission to control others to their hearts content – and they are not about to give that up.  For they have become addicted to the power covid gives them like a drug addict.

That’s why the Vax Resistance movement is critically important.  Government fascisti have to be broken from their addiction to power.  That the Fifth Circuit has tossed the OSHA Mandate out on its ear is a great step, resulting in OSHA suspending the Mandate yesterday (11/18).

[FYI, the Fifth Circuit decision is really well-reasoned.  For example, it mentions the Nondelegation Doctrine, casting shade on the constitutional viability of not just OSHA but the entire Administrative State.  You can read the decision here.

“The nondelegation doctrine constrains Congress’s ability to delegate its legislative authority to executive agencies. See, e.g., Mistretta v. United States, 488 U.S. 361, 371–72 (1989) (“The Constitution provides that ‘[a]ll legislative Powers herein granted shall be vested in a Congress of the United States’ . . . and we have long insisted that ‘the integrity and maintenance of the system of government ordered by the Constitution’ mandate that Congress generally cannot delegate its legislative power to another Branch.” (first quoting U.S. Const. art. I, § 1; then quoting Field v. Clark, 143 U.S. 649, 692 (1892))).”

Of course, the Chicoms aren’t the only ones playing the bribery game, albeit they have billions more to spend it on that anyone else.  Chief among the other players is Big Pharma.  Let’s hope that Pfizer jumped the shark this week with this insanely brazen payoff/coverup: FDA Asks Court for 55 Years to Fully Release Pfizer COVID-19 Vaccine Data.

“The Food and Drug Administration (FDA) asked a federal judge on Nov. 15 to give it until the year 2076 to fully release the documents in its possession tied to the approval of the Pfizer-BioNTech COVID-19 vaccine.”

The beauty of this is exposing the explicit corruption – the FDA being bribed by Pfizer.  You’d think it would be easy for one of those celebrity divorce attorneys paid a fortune by the cheated-on wife to find where her billionaire husband’s secret bank accounts are to discover who in Pfizer paid off who in the FDA.

While Vax Resistance is not yet as large in Europe as in the US, it is growing.  Last week at the European Parliament in Brussels, four MEPs (Member European Parliament) held a press conference denouncing the mandates and lockdowns.  MEP Christine Anderson of Germany delivered this unflinching call for freedom:

While MEP Cristian Terhes of Romania exposed the pharma-EU collusion by showing the vaccine contract between them – the extent of redactions is a jaw-dropper.  He closed with this memorable line we should all have on recall:

I started writing this HFR early this morning. Starting at 9 am, I began checking Fox every 10-15 minutes nervous as a cat, waiting for the verdict.  Finally at 1:20 this afternoon, there it was:

KYLE RITTENHOUSE FOUND NOT GUILTY ON ALL COUNTS IN KENOSHA TRIAL

Wow… American justice, the Constitution, the decency and integrity of ordinary citizen-jurors having the courage to deliver an honest verdict in the face of lunatic anger and threats, it’s all there in that headline.

After the verdict of “Not Guilty” was read on all five counts, Judge Bruce Schroeder addressed the jury:

“I couldn’t have asked for a better jury to work with and it has truly been my pleasure. I think, without commenting on your verdict, the verdicts themselves, just in terms of your attentiveness and the cooperation that you gave to us, justifies the confidence that the founders of our country placed in you. So I dismiss you at this time.”

In effect, the jury found the Woketard Left and our Commie-Fascist Media GUILTY of complete and total mendacity towards America, decency, and justice.  Their bottomless bitterness and rage today is Schadenfreudeliciously what they deserve.

The 12 jurors in this trial and presiding Judge Schroeder are the HFR Heroes of the Week.  Watch as the verdicts are delivered to Kyle.  You’re going to cry just like Kyle.

Time to lighten up.

A quick perusal of woketard bitterness on Twitter displays their constant accusation of Kyle as a “white supremacist” – when the three Antifa thugs he shot were as white as him. Branco shows what’s happened to this woke narrative: 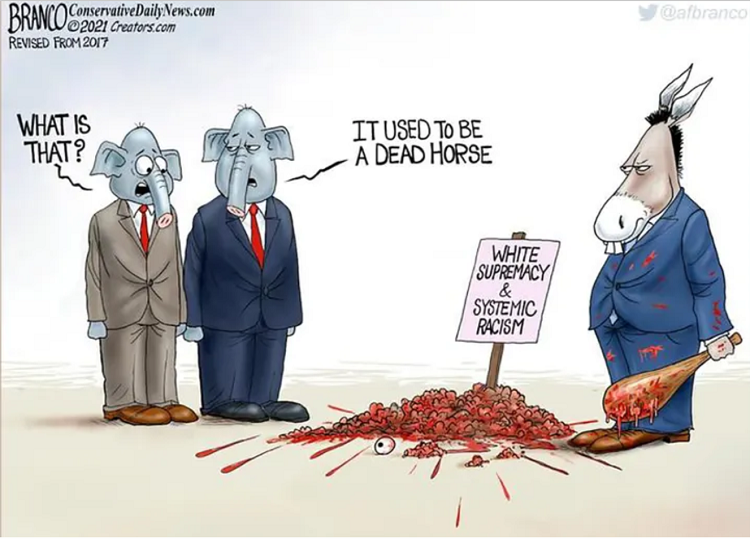 I hope you enjoyed Kamala Harris Is A Very Weird Person on TTP ereyesterday (11/17).  But she is certainly no weirder than the folks who pull Joe Bidet’s puppet strings, e.g., Nurse Jill.

Stories began popping up this week like Biden Admin Looking to Dump Kamala?  The rumor is that Xiden’s handlers, Nurse Jill especially, are sick and tired of VP Kneepads, so will “kick her upstairs” by nominating her for the Supreme Court, then replace her as VP with Pete Butt.

Try to wrap your head around how stupid this is.  First, there’s no SCOTUS vacancy, now or looming.  But even if there were, VP Kneepads has as much chance of being Senate confirmed as Alexandra Occasional-Cortex.  Nurse Jill must rally be losing it.

Meanwhile, thought you’d like to see the latest VP meme making the rounds: 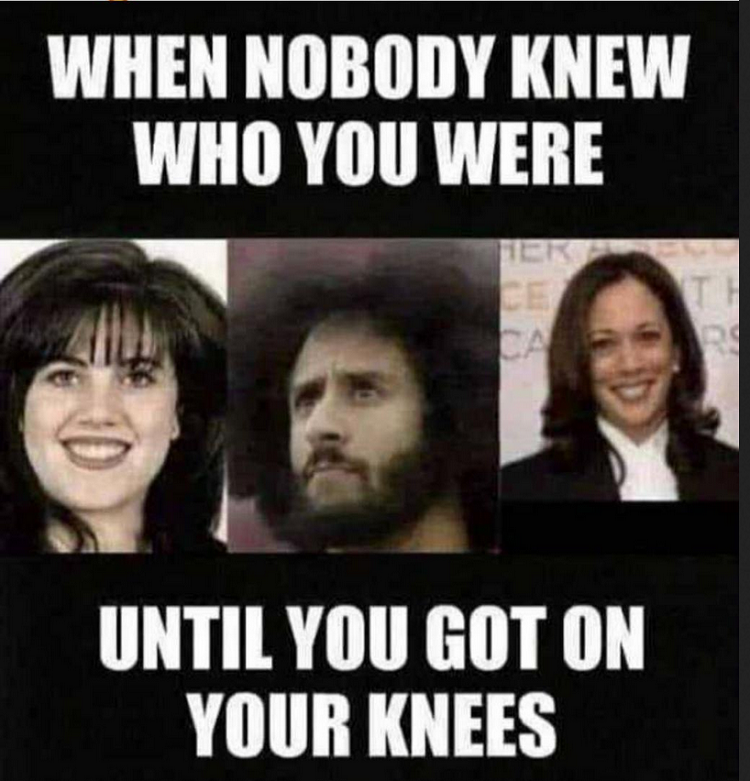 The coolest guy in Congress at this moment has got to be Paul Gosar (R-AZ), while the coolest lady is Lauren Boebert (R-CO).

Last week, Gosar posted a spoof “anime” cartoon video of him attacking such Titans as AOC and Xiden. Cue the Demtard outrage. Watch:

Dems got their panties so twisted they voted on Wednesday (11/17) to censure him, stripping him of all committee assignments (no GOP votes to do so – Rinotards Cheney & Kinsinger don’t count –  with Kevin McCarthy saying he would be reinstated when GOP take the House next November).  Gosar reposted the video after the vote with no apologies.

In the censure debate, Lauren Boebert was on fire, torching Ilhan Omar, Eric Stalwell, and other Dem hypocrites.  Enjoy! 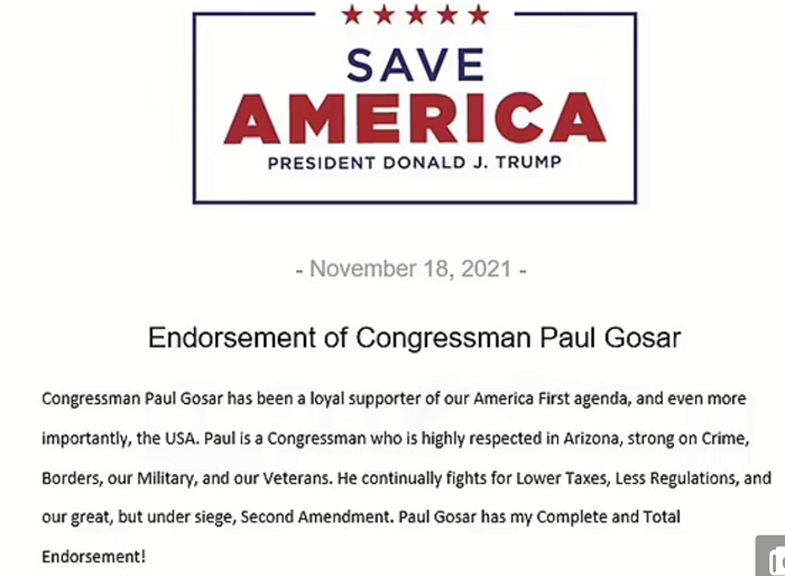 The day before, the President couldn’t resist trolling his Pretender: 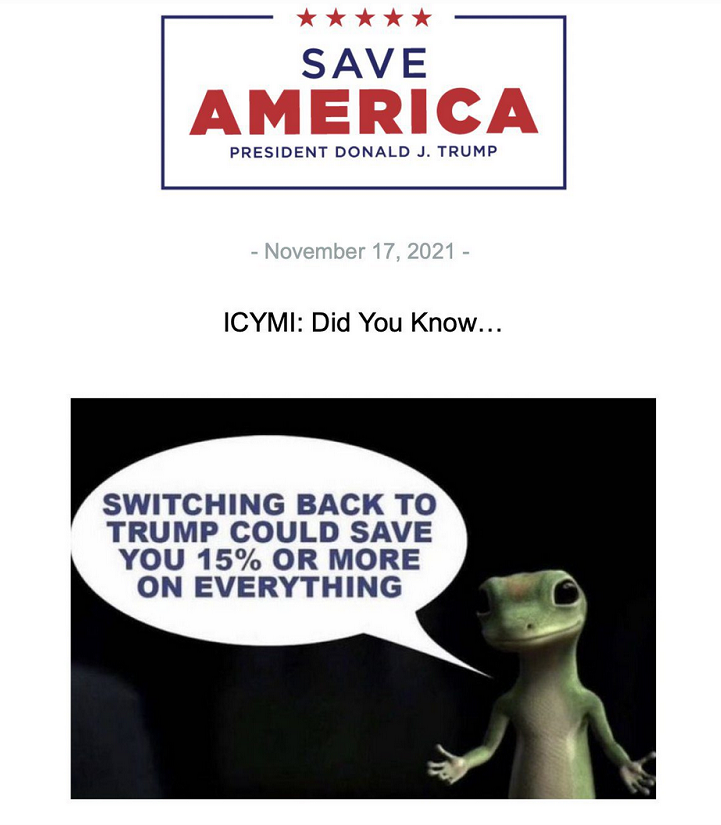 [ICMI: In Case You Missed It]

Prescient because of the Demtard House vote this morning to spend more trillions.  Ramirez’s reaction: 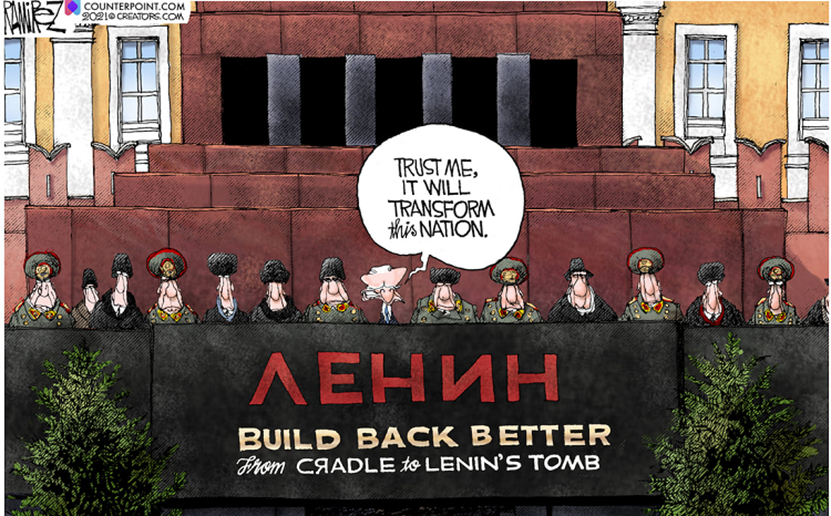 Fat chance it will pass the Senate, though… 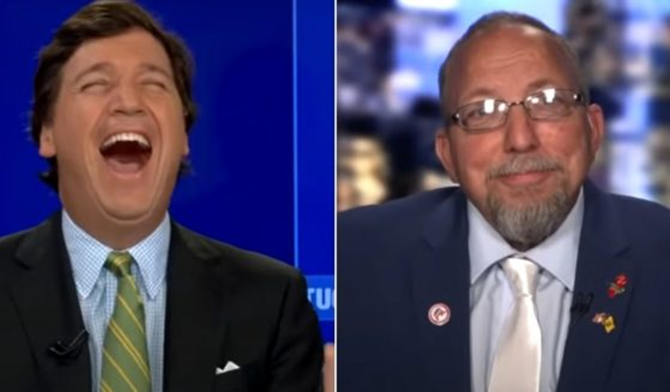 We’ll close with Tucker interviewing Ed Durr, the truck driver who came out of nowhere to beat the Jersey State Senate Chairman, Dem Steve Sweeney.  At the end, Durr says something that causes Tucker to burst out laughing. You might too.  Durr’s a real folk hero now.

All in all a great week – starting with the pathetic ending last weekend of the UN Climate Summit: “What A Circus!” COP26 Climate Summit Concludes With Plethora Of Hogwash Statements. Then the Vax Mandate collapses. And we end with an inspiring court victory for a heroic young man.  We have so much to be thankful for this coming Thanksgiving Week.