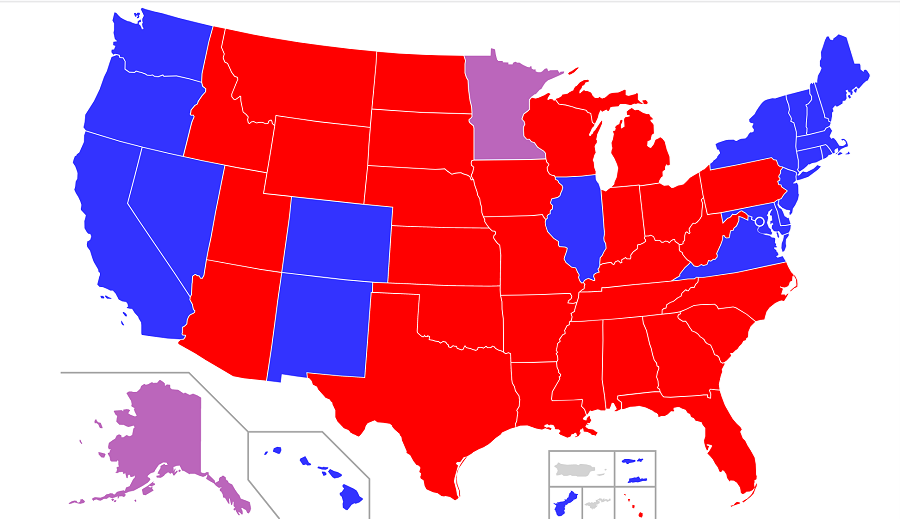 The Map That Can Save America

Yes, this is the map that can save America – not necessarily will.  That’s up to us, America’s patriots who will do what’s necessary to preserve our country by standing up to America’s anti-patriots who want to destroy it.

First, though, let’s talk about how Trump’s lawsuits.  Most are to stop the endless on-going illegal count of ballots with no observers as in Michigan and Pennsylvania.  But what about the ballots already counted with no observers?  What do the courts including SCOTUS do about them?

The key problem is that there is no remedy.  As once the outer envelope of a mail-in ballot has been tossed, there’s no way to check if the inner envelope ballot matches.  So what could be the legal remedy if you can’t tell between a legal and illegal ballot?

This is why the Dems have been so blatant in mass vote fraud right before our eyes – as there seems to be no remedy in court for it.  Could a recount work, say in Georgia?  Maybe.  Especially if there is a difference in the state government printers used to print the mail-in ballots and others used to print the fraudulent ones.

The claim, however, that DHS had the paper for all ballots impregnated with a “QFS blockchain encryption code” or “non-radioactive isotope watermark” is highly questionable.  Skye was asked about it on the Forum.  His response:

“Stable isotope tagging could be readily done, as could trace combinations of rare earth elements, however this would require mass spectrometer analysis to read it.  It would also require Homeland Security involvement in the ink manufacture.

Microdot printing is much more likely because this requires no special inks and can be read by optical scanners.  All digital color copiers and printers sign their ID to every copy this way.  They do this automatically without the user knowing about it.  Lots of leakers and whistle-blowers have been caught this way.  Printing presses can also print essentially invisible to the eye ID microdots.  I don’t know whether this was actually done, however.”

The fellow making the QFS claim in the link above, Steve Pieczenik, predicts the “sting” will be exposed and arrests made within a few days.  I would love for this to be true – but no one plotting against Trump has been arrested yet in the last three years.  Time is fast running out to keep waiting for Godot.

Back to the lawsuits. Trump and the GOP are suing in Georgia, Michigan, Nevada, Pennsylvania, and Wisconsin.  Yesterday, famed constitutional law professor Alan Dershowitz explained why the only one that will hold up in SCOTUS is Pennsylvania:

“Pennsylvania is the strongest place for President Trump to be able to bring the lawsuit because he has a pure constitutional issue there. What happened is the judiciary extended the time for accepting ballots, mail-in ballots, by three days beyond what the legislature did, (whereas) the Constitution’s Article 2 gives the power to do that to the legislature.”

He is referring to these specific words of Article II, Section 1:

“Each State shall appoint, in such Manner as the Legislature thereof may direct, a Number of Electors, equal to the whole Number of Senators and Representatives to which the State may be entitled in the Congress.”

As he says, “this is a pure constitutional issue.”  If SCOTUS rules for POTUS, it’s because the time extension for accepting ballots was given by state judges, not the legislature.  It’s hard to see how the ruling could be otherwise.  The case for this is up on TTP right now: Why Trump Will Triumph in PA Litigation.

Whichever, the Constitution’s words are undeniably clear: that a state’s legislature and only the state legislature has the exclusive authority to appoint the state’s Electors to the Electoral College – the vote of which is what actually elects the President and Vice-President.

Not a state’s governor nor any of its judges, just the legislature alone.

Now we go the Map That Can Save America.

The Map That Can Save America

This is a map of state legislature control by party.  The two in purple have split control, the other 48 one party controls both the state assembly/house and the state senate blue-D/red-R.  Note that every state where Trump is suing and/or Dem vote fraud is rampant – Arizona, Georgia, Michigan, North Carolina, Pennsylvania, and Wisconsin – is red/R.

As you can see, the control in all except the Arizona House is substantial.  Which means these legislatures have the constitutional authority and power to appoint the Republican slate of Electors to the Electoral College.

The article to read here is Daniel Horowitz’s How Republican-controlled state legislatures can rectify election fraud committed by courts and governors – by the power our Constitution gives them. 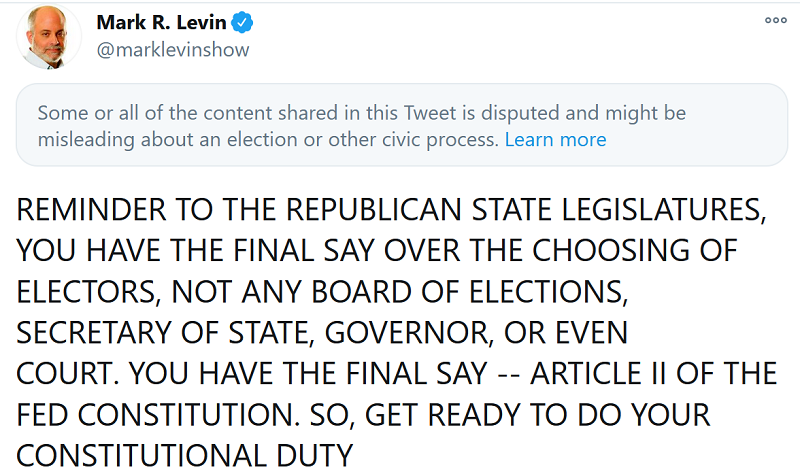 The headline on NewsMax this morning (11/06) is: Trump – Supreme Court Should Decide Election.  It is a mistake to put all his eggs in that one basket, especially when so far, ACB stands for Amy Cop-out Barrett, with her “I haven’t had time to review the cases” mantra.  Further, POTUS does not seem to grasp that SCOTUS has no remedy for him.

What every conservative individual and group in the US should be doing right now is 1) calling and contacting everyone in the crucial state legislatures to man up and choose their Electors, and 2) contact the White House to encourage the President to hold rallies in all six crucial states to ask those attending to do the same.

Just think if the tens of thousands who attended his rallies in Pennsylvania did this – or in Michigan, Wisconsin, Georgia, North Carolina or Arizona.

With that, all SCOTUS needs to do is simply reaffirm the constitutional authority of the state legislatures.  An easy 6-3 call.

So start calling and emailing if you live in one of the Stop the Steal Six states or know people who do and are patriots.

The evidence for massive vote theft is orders of magnitude greater than anything America has remotely experienced before – dwarfing, for example, 1960, when Chicago Mayor Daley rigged Illinois’ vote and Lyndon Johnson did the same for Texas.

The Federalist is asking a very pertinent question: How is it possible that Republicans won more seats in the House, retained the Senate, and picked up state legislative seats, all while the same voters voted against Trump?  Answer:  it isn’t, period.

Is there a fallback?  That would be the Dems’ 2016 ploy for recruiting Faithless Electors.  There were 10 of them.  Three were invalidated by state law, seven voted for other people like Colin Powell and Faith Spotted Eagle.

The lesson here is an Elector doesn’t have to switch his/her vote from Biden to Trump or vice versa – they simply don’t vote for either, vote for Brad Pitt or Scarlett Johansen instead.  In other words, if Biden’s margin of electoral college victory is small, like say 273, then all you need is a small handful of Electors who do this so he doesn’t get 270.

The Constitution is clear, a candidate must get a majority of Electoral Votes to be president.  If neither Trump nor Biden get to 270, then we go to a Contested Election, held shortly after the new 117th Congress is sworn in on January 3rd.  The Senate votes for Vice-President, with each Senator having one vote. The House votes for President, with each state delegation having one vote.  Per the 12th Amendment:

“The person having the greatest number of votes for President, shall be the President, if such number be a majority of the whole number of Electors appointed; and if no person have such majority, then from the persons having the highest numbers not exceeding three on the list of those voted for as President, the House of Representatives shall choose immediately, by ballot, the President. But in choosing the President, the votes shall be taken by states, the representation from each state having one vote; a quorum for this purpose shall consist of a member or members from two-thirds of the states, and a majority of all the states shall be necessary to a choice.”

The new House will still have a Dem majority, albeit smaller, but that doesn’t matter.  Since the GOP has a majority of 26 state delegations to the House (with the Dems having 23 as PA is tied), a House Contested Election would reelect President Trump.

In sum – no matter what the braying of the Traitor Media declaring Pedo Joe the “winner,” POTUS will not concede, he will fight against this fascist fraud – and will now go after his senile nemesis hammer and tongs.

The must-read here is the lead item in Skye’s Links yesterday: Trump’s (64-Day) Post-Election Endgame (Or, Can A Criminal Like Biden Be Inaugurated President?)

This is a fascinating discussion of how POTUS could have Barr order the arrest of Biden for treasonous crimes, and how the Electoral College process – which doesn’t end on its vote day of December 14 but continues until January 6 – could stymie his inauguration.  Trump is playing for keeps.

As time goes on now, day by day the lunacy of the Dem/Media fraud will become more apparent.  And more laughable.  China Joe has been declared the “winner” in Georgia by 1,500 votes out of almost 5 million.  This of course triggers a recount that will be a forensic audit.

Meanwhile, it’s amusing to see all the angst in DemLand, all the fascisti anguish about No Blue Wave.  The Pubs keep the Senate.  Not one single House Pub incumbent lost.  Instead of gaining a clutch of House seats they were promised by their 80 year-old Speaker, they’ve lost a bunch.  So far the GOP is up six seats with a couple of dozen races still undecided, so they may be up 10 or so.

That would result in a razor-thin Dem House majority of 210-206.  And remember New Jersey’s Jeff Van Drew who switched from Dem to Pub in 2019 to oppose the impeachment of POTUS?  He won reelection – as a Republican.

Result? Pelosi is out the window – the rebellion against her being reelected Speaker on January 3 is immense.  If POTUS triumphs, be assured more defections like Van Drew will have Speaker Kevin McCarthy before long.  In any regard, bet that the Commie Squad will rapidly lose influence among Dems, sick and tired of being bossed around by two-digit IQ children.

And there’s more: Democrats’ down-ballot misery continues with state legislative battles.  That state party map we’ve been looking at is going to get redder.  It’s a big deal because it’s the state legislatures that draw the congressional districts for ten years after the 2020 census.  Already, House Dems are moaning about being “torn apart” in 2022.

Then there’s the biggest immediate positive takeaway from Election 2020.  The total implosion of the Dems’ Identity Politics.

Blacks and Latinos voted for Trump 2,3 times or more than ever before: Trump Massively Exceeded Expectations With Minority Voters. Here’s How He Did It.

This is an Epic Fail of their Marxist Fascist primitive tribalism “people of color” vs. “whites” – which is all they’ve got ideologically now.

Time to conclude.  Algore fought George Bush for the presidency for 37 days.  We’ve only been at it for 3.  This is far from over.  Our POTUS is a fighter, infinitely more than Algore dreamed of being.  And he is America’s greatest patriot.  He knows that if the Dems fraudulently take his election down, it is a blow to the integrity of our country’s legitimacy from which we may not recover.

He won’t let that happen.  At Noon on January 20, 2021 at the West Front Portico of the US Capitol, it will be Donald Trump’s hand on the Bible taking the Presidential Oath of Office. 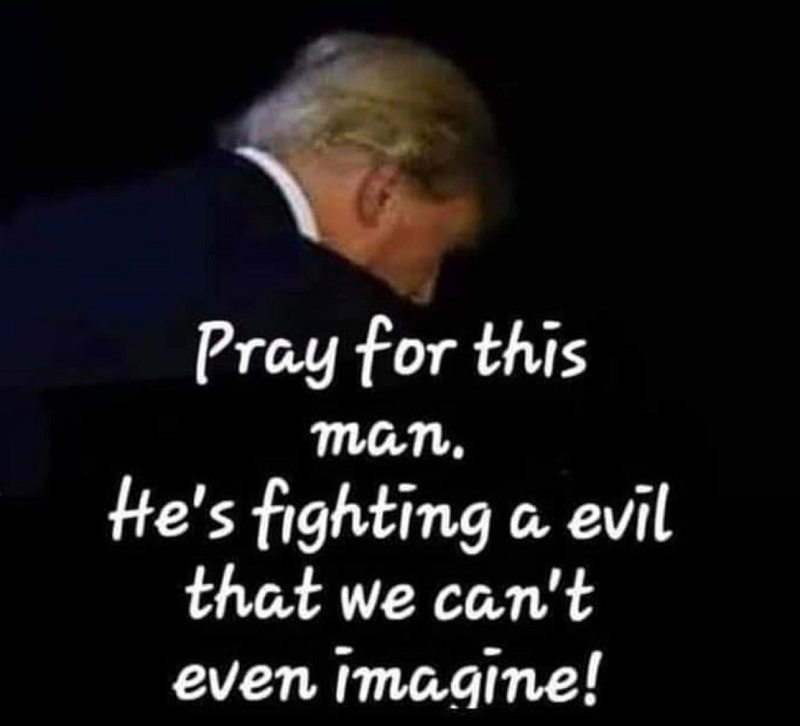