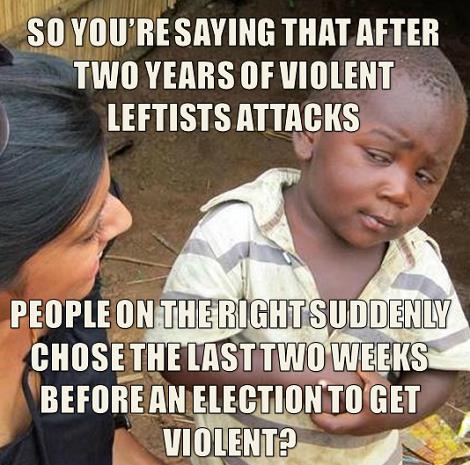 You’ve seen the screaming news today – a Democrat’s dream Alt-Right White Trump Supporter named Cesar Sayoc has been arrested by the FBI on suspicion of sending all the Fake Bombs to a dozen top Dems and Fake Newsers.

It’s simply too good to be true that this Ultimate October Surprise just fell from heaven into Democrat laps by sheer luck and chance.  The guy is a total lost soul kook who’s easily played.  He has a long history of wackdoodle threats that even Geraldo Rivera points out: 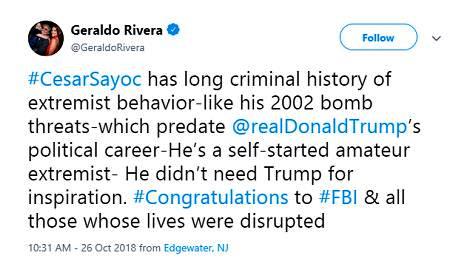 Previously, he had no history of being anywhere on the right, much less fanatically so.  Yet suddenly, his van is very professionally covered in Trump stickers and decals:

This cost a lot.  Graphic artists will tell you such a van window collages were laid out on a precision grid with each carefully sized – they can’t be lined up perfectly by taping them from inside the van.  This is pro work and he’s an indigent.  Who paid for it?

Let’s hope Wray and Sessions order a forensic exam of Sayoc’s finances.  This is a set up – Sayoc was paid well to do this by Soros or someone of his ilk.  Bet on it.  But will it be uncovered in time to undo the damage?  Will it be uncovered at all?  That’s a bet you might not want to take.

Sharyl Attkisson is arguably the best investigative journalist in America.  Her When Democrat Tactics Backfire in TTP today (10/26) is a must-read, listing the Top Ten Dem Disasters dooming their vaunted Blue Wave.

In the last couple of days their top ten have all culminated into an eleventh that spotlights their complete dishonesty, desperation, and dementia all wrapped up in a Fake Bomb package.

Reuters is reporting (10/25) that none of the bombs were designed to explode.  The headline claim is that they “were designed to scare rather than kill,” but the way the Fake News Democrat Media is exploiting the issue makes it clear that it’s a Dem October Surprise smear job on Trump’s GOP.  Like this Commie News Network chyron yesterday: 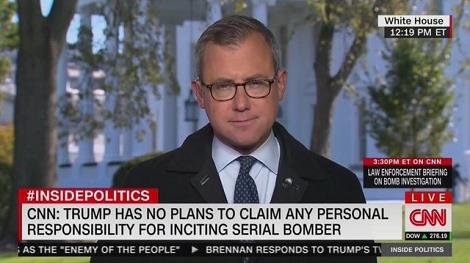 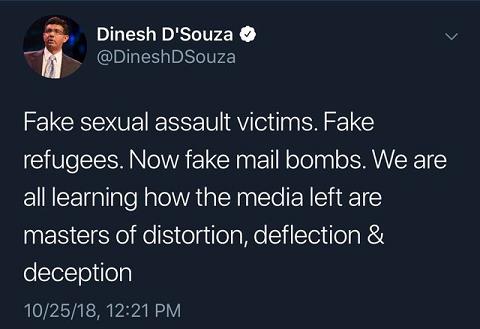 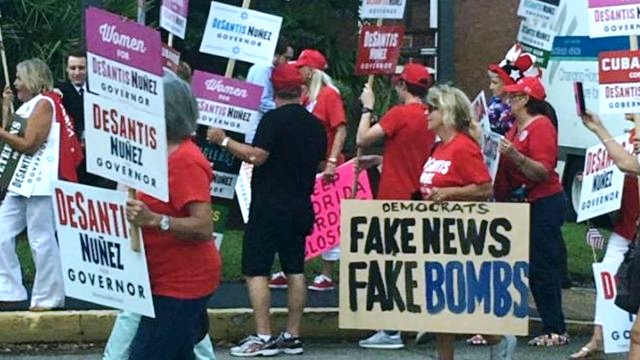 Yet here’s what I don’t understand:  How can anyone sane vote Democrat?  Put it another way:  How can polls be remotely close? 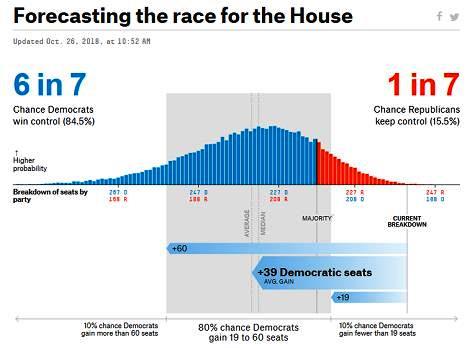 We’d like to believe that as we have Fake News and Fake Bombs, we also have Fake Polls.  Trouble is, we want to believe that.  And you can never trust predicting something you want to happen.  It’s called “confirmation bias” – the ubiquitous human tendency to only pay attention to evidence confirming what you want to be true, and ignoring evidence that disconfirms or falsifies it.

Nonetheless, it’s utterly baffling how voters could be so masochistic as to want open borders, sanctuary cities, pay for illegals to be on welfare, leftist mob rule, and the best economy we’ve had in many years thrown in the ash can.  You’d think there would be the most massive voter revolt against all this – but where is it?

Well, let’s see.  Could Nate Silver be as ludicrously wrong now as he was on election day in 2016? 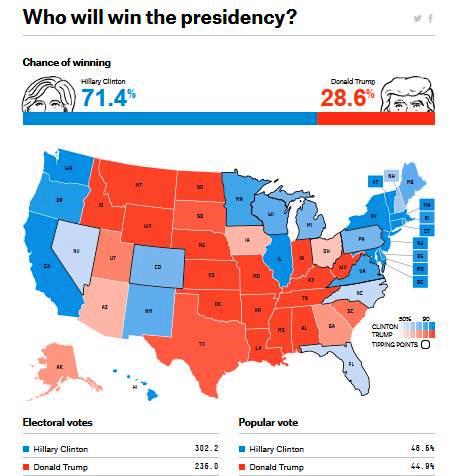 Silver wasn’t just wrong, he was exactly wrong:  The EV count was 306 Trump, 232 Clinton.  Could he be as wrong now as he was then? 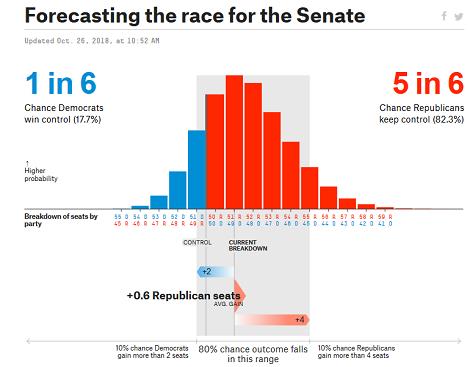 Long-time TTPer Robert Armstrong on the Forum suggested we look to well-known American history professor Larry Schweikart – author of A Patriot’s History of the United States – for clues.

Larry has recently retired and is now focusing his attention on what’s going on with the midterms.  Specifically, in his Twitter feed #LarrySchweikart, he is drilling down on the early and absentee voting that’s been going on since earlier this month, county by county, district by district.

For background, you need to read his article on Tuesday (10/23) in Big League Politics: How “Early Voting” and the Democrats’ Attempt to Rig the System Backfired.

Normally, Dems predominate in early voting while Pubs vote on election day.  So by comparing early voting ratios in 2016 to today gives you an indication of how any election will turn out.  All over the place, Pubs’ early voting numbers are way up and ahead of Dems’, which is unprecedented.  For example, Larry observed this morning (10/26):

“Lee County in Southwest Florida looks like a bellwether of a strong GOP turnout. The Fort Myers area went over 121,000 ballots cast Thursday (10/25, a 27 percent turnout so far) and twice as many Republicans have voted so far as have Democrats.”

“No blue wave in North Carolina. Dem turnout in early voting is down several percent from 2016, GOP is matching 2016 pace, and Independents turning out have increased.”

His overall prediction as of today: “Rs will gain net 4-7 Senate seats and hold the House by 5 or so seats.”  We can be confidant re the Senate, but that’s schizo too-thin for the House.  Twelve days to go until we wake up the morning of November 7 to find out if the nightmare of Speaker Pelosi has been avoided – or not.

Meanwhile, the questions stands:  How can anyone sane vote Democrat? 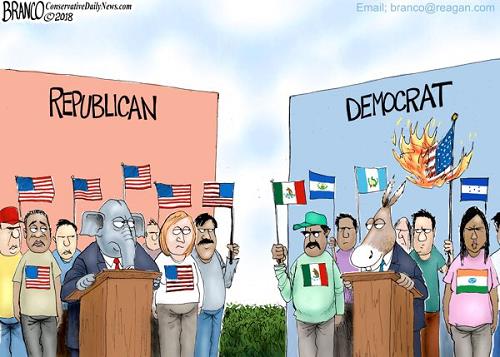 On Monday (10/22), Fox reported: Trump vows to send as many troops ‘as necessary’ to keep growing migrant caravan out.  On Thursday, Trump Prepares Executive Order to Deny Asylum to All Illegal Aliens. Today (1/26), Secretary Mattis Approves Sending Military Troops to Border with Mexico.

This is all to the good, for the invasion of illegals into our country will continue unless physically stopped.  Meanwhile, however,  the huge mass invasion of thousands tramping across Mexico grabbing all the headlines – well, that’s over.

Yesterday (10/25), the WaPo ran a must-read:  Sickness, Fear, and Harrassment in Mexico Whittle Away at Caravan.

At least, that was the headline of the story yesterday and remains so in the story’s URL: https://www.washingtonpost.com/world/the_americas/sickness-fear-harassment-in-mexico-whittle-away-at-caravan/2018/10/25/54351b4c-d80b-11e8-8384-bcc5492fef49_story.html.

By this morning, the story had changed, with the headline: “Mexican Towns Rally for Migrants Who Try to Be Good Guests.”  Try that on for libtard warping of news.  Scroll down past the touchy-feely stuff and you get to the real deal:

“(The caravan) has begun to thin, with authorities saying 1,740 have applied for refuge in Mexico and hundreds more have taken up offers of bus rides back to Honduras. Sickness, exhaustion and police harassment have also helped whittle down their numbers.

Mexico’s federal government hasn’t given the migrants on the road a single meal, bathroom or bottle of water, reserving any aid only for those who turn themselves in to apply for visas or be deported.

Immigration officials appeared to be intervening more aggressively with the migrants’ movements amid the sweltering 90-degree heat.”

The story abruptly ends after more touchy-feely, deleting from the original yesterday all the interviews of people turning back and giving up.  The whole dog’s breakfast is still stuck a few miles from the Guatemala border.  The odds of any but a handful making it to our border over a thousand miles away are falling off a gambler’s cliff.

Note the markets are falling off a cliff today, even with the announcement that third-quarter GDP was a solid 3.5%.  Why would that be?  You won’t like the answer:  the markets are pricing in the Dems taking the House.  Watch for the rout to accelerate if that happens.  The good news is that if the Pubs keep the House, the rout will immediately reverse and shoot for the moon.  Get out and vote!

It’s a warning that any House seat voter-fraud-won by Dems will be legally challenged.  That’s really good news.

And how about this for MAGA fabulous news.  The entire Libtard Media is freaking out over this – as the New York Slimes headlines it (10/21): ‘Transgender’ Could Be Defined Out of Existence Under Trump Administration.  In other words, back to normal, “defining gender as a biological, immutable condition determined by genitalia at birth.” In other words: 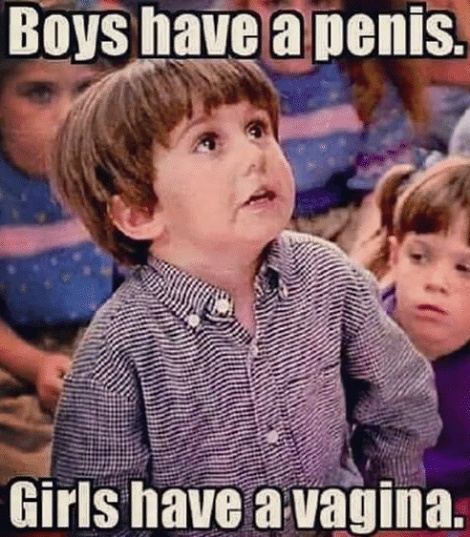 And that’s the end of it.  Sanity returns.  Liberal pumpkin heads explode.  MAGA.

Speaking of Libs going Full Looney, here’s a story you can’t make up.  Are you ready?  The dateline is from San Francisco (where else) on Sunday (10/21):  PETA Claims Cow’s Milk Is A Symbol of White Supremacists.

Hope you were sitting down and not drinking anything when you saw that.  You were warned.

Ever hear of a guy named Steve Ferrara?  He’s a MD who just retired as the US Navy’s Chief Medical Officer.  His bio – About Dr. Steve Ferrara – is amazing.

You’ve no doubt have heard of an execrable Congresswoman named Kyrsten Sinema, who says her state of Arizona is “the meth lab of democracy,” and that housewives “leech off their husbands.”  She gave up her House seat to lose a bid for the Senate on Nov. 6th against Col. Martha McSally, the first woman combat fighter pilot in the US Air Force.  It’s no contest.

Steve is a conservative Republican running against a radical Dem, Greg Stanton, for Sinema’s vacant seat, Arizona’s 9th CD.  You can check out his website, https://ferraraforcongress.com/ — but to see how mind-blowing cool he is, you have to watch his campaign ad.

You’ve never seen a Republican ad like this – this is the new GOP and it’s MAGA.  Again, be sitting down, speakers full tilt, and don’t be drinking anything:

Then there’s Elizabeth Heng, Stanford University student body president, Yale MBA, successful entrepreneur, running against a professional politician who’s never had a job in his life.  For 40 years, Jim Costa has been in the California Assembly then Congress in the state’s 16th CD (Fresno).

Her latest campaign ad has made national news, as it depicts a Costa look-a-like in walking Nancy Pelosi’s red high-heel shoes, and her saying at the end, “Costa la vista, baby!”  Again, this is the MAGA GOP coming down the road.  Enjoy.

It’s important to realize the impact President Trump is having upon the world.  The latest example will take place this Sunday (10/28) in the world’s fifth largest country in size and sixth in population – Brazil.

That’s when “The Tropical Trump” – Jair Balsonaro – will get elected President of Brazil.  Enjoy Monica Showalter’s description of what’s happening:  Left Wets Its Pants Over Balsonaro.

That’s just what will happen when we expand the Senate and if we keep the House.  Please do all you can in your Congressional District to achieve this.  The motivation has been provided by how scared the Slimes is.  Its Sunday (10/21) Opinion section ran: What If The Republicans Win Everything Again?

Just how scared is revealed in the subtitle:  Total Victory for the GOP Would Mean Trump Unleashed.

Yes!  That’s exactly and precisely what America needs.  It can be done.  We have eleven days to do it.  Yes we can!