Jack Wheeler is traveling home from Israel today, so he asked me to fill in on the HFR.

This has been a great MAGA week. Things got off to a fast start Monday, got better as the week wore on.

For some reason, Fauxcahontas Warren thought Monday (10/15) was a good day to make public a DNA test that indicates maybe, between six and ten generations ago, she had an ancestor who was an American Indian, or Hispanic.

That would make Lieawatha between 1/64th and 1/1012th Native American, or Hispanic. At the 1/1012th number, Warren would be 99.999 percent white, less Native American (or Hispanic) than the average white person. 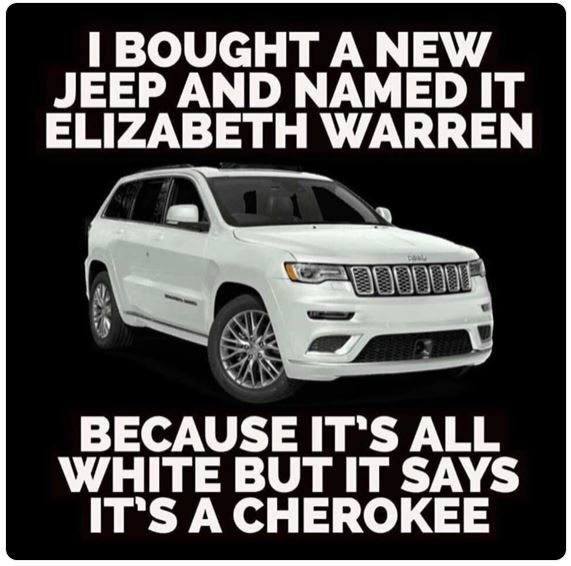 Carlos Bustamante, the geneticist who conducted the test, couldn’t use U.S. tribal groups for comparison (not enough DNA samples), so he used DNA from 37 people from Mexico, Colombia and Peru for comparison.

Those 37 were indigenous to the Western hemisphere. But that’s not the same as being Native American – descended from one of the 573 federally recognized tribes in the contiguous U.S.

Initially, the Lying Swine hailed the DNA report as “proof” Lieawatha is indeed a person of color, but backtracked swiftly after the Cherokee tribe denounced the DNA test as “inappropriate and wrong.”

The Boston Globe and the Washington Post had to own up to elementary math errors.

“We should not have relied on media reporting before tweeting,” confessed WaPo “fact checker” Glenn Kessler.

By Monday night, Fauxcahontas was a laughing stock, raging incoherently at Donald Trump on Twitter. Wags had a field day with memes. 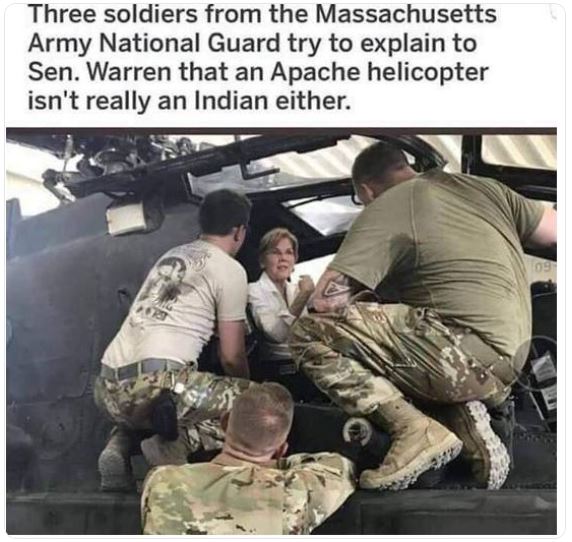 One wonders how anyone with an IQ higher than that of, say, a carrot, could think making public a DNA test that disproved her claim was a good idea. All she did was remind people how she used false claims of being Cherokee to get cushy affirmative action gigs at the University of Pennsylvania and Harvard.

We even got to remind people Fauxcahontas swiped recipes from a French chef for her contributions to the Pow Wow Chow cookbook.  Gigglesnort.

In almost as breathtakingly stupid as Fauxcahontas making her DNA test public, George Soros and other wealthy leftists financed a caravan of 4,000 Honduran “migrants” who planned to enter the U.S. illegally.

Here’s a video of cash being handed out to the “migrants.”

President Trump has told the governments of Honduras and Guatemala he’ll cut off all foreign aid immediately if they don’t stop the march. If necessary, he’ll deploy U.S. troops along the border to repel the invasion.

Can you think of anything that illustrates better how little the leftist elite understands normal Americans? Most of us stand up and cheer for what the president said here, and here, and here.

If this is their “October surprise,” it’ll backfire. Big Time. The march puts border security front and center, an issue that — outside of Manhattan and San Francisco — doesn’t work well for Democrats.

And just before the midterms, blacks are reminded Democrats care more for illegal immigrants than they do for them. 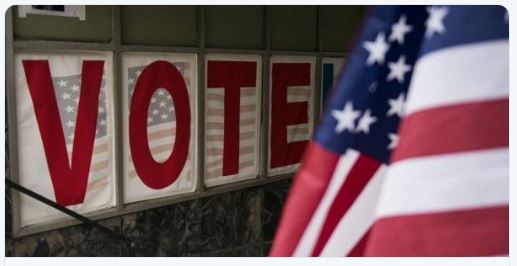 So it’s almost too bad the march was stopped at the Mexican border.

The suit was so bogus the judge said Stormy will have to pay Trump’s legal fees.

The Lying Swine doubtless would have ignored this news had not the president tweeted this: 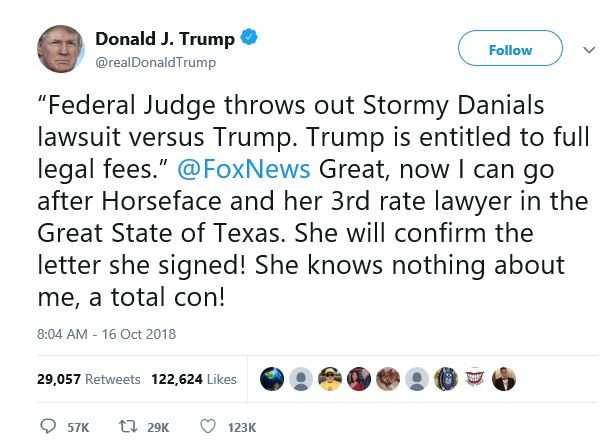 “Horseface and her 3rd rate lawyer.”  Fake newsers were indignant the president would use such language. The New York Times published not one, but two “news articles” berating him for it.

Other MSM commentators also expressed high dudgeon. Stormy chimed in with this: 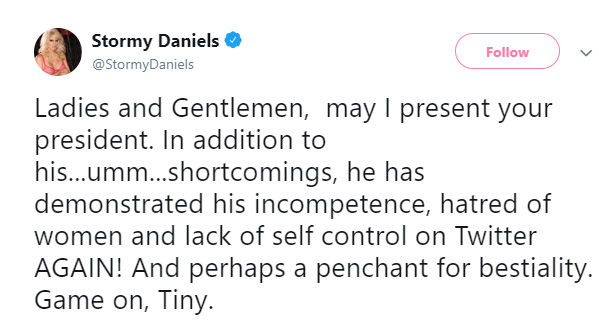 Stormy’s retort wasn’t the most clever.

“Penchant for bestiality? Daniels doesn’t flatter herself with that remark,” said Paul Mirengoff.

This demonstrates yet again how President Trump baits the Lying Swine. They think they control the narrative, but he yanks their chain, and dominates the news cycle.

The president can do this because leftists are still genuinely surprised when a target of their lies and smears fights back.

With their enormous egos, and ensconced in a thick bubble, leftists think we deplorables don’t notice their hypocrisy, expect us to be swayed by their faux indignation.

Stormy claims Trump’s criticism of her is an attack on all women. But not as many women as she thinks identify with an aging prostitute who files bogus lawsuits.

“You’re right, Mr. Avenatti. President Trump probably shouldn’t have called Stormy Daniels a horse face,” said Charlie Daniels. “I think the other end of the animal describes her much better.”

Also Monday, Carter Page filed a defamation lawsuit against the DNC and Perkins Coie, the law firm that was the intermediary between the Clinton campaign and Fusion GPS.

To the surprise of no one, the MSM ignored this news.

The defamation Page alleges is all what’s in the Steele dossier. If he chooses, Page could also file suit against news organizations that reported those allegations.

Page filed the suit in a federal court in Oklahoma, where he should be find a sympathetic jury. Methinks he soon will be a much wealthier man.

George Papadopoulos, who is eager to tell his story to Congress next week, may join the fun. He hired a top law firm in New York to play offense, not defense, he said.

When they weren’t heralding her “proof” that Fauxcahontas is a woman of color, or waxing indignant over horseface Stormy, the Lying Swine were trying to make us care about the disappearance of Washington Post columnist Jamal Kashoggi.

Kashoggi is a Saudi national who disappeared after entering the Saudi consulate in Istanbul last week. He was murdered there, claim Turkish media (controlled by the government), and Qatar. No body has been found.

The WaPo calls Kashoggi a journalist, said his foremost desire was to promote free speech in the Middle East.

Bull.  Kashoggi is/was a member of the Muslim Brotherhood, a lifelong buddy of Osama bin Laden, a propagandist for al Qaida and Hamas. He was no more a journalist than Goebbels was.

The Turks claim to have evidence Kashoggi was murdered in the consulate (even though there is video of him leaving it), but won’t show it to anybody.

The stories told by Saffuri and the Turks have more holes in them than Swiss cheese, and keep changing.

I wouldn’t be surprised – or bothered – if the Saudis offed Kashoggi (he was a traitor). But I’d be astonished if the Saudis – who pulled off a massive amphibious operation in Yemen in secret, infiltrated every Islamist group in Syria and bumped off their leaders – would have done this in so clumsy and stupid a manner as the accusers describe.

The accusations are a smear campaign by the Muslim Brotherhood to weaken the U.S. – Saudi alliance. I predict it will boomerang, as did the smear campaign against Judge Kavanaugh.

Natalie Mayflower Sours Edwards, 40, a senior analyst in the Treasury department’s Financial Crimes Enforcement Network (FinCEN), was arrested Wednesday (10/17) for leaking Suspicious Activity Reports (SARs) on Paul Manafort and other figures in the Russia collusion scandal, and for conspiring to leak others. 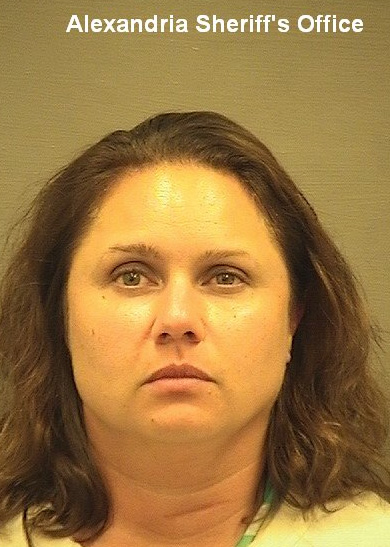 A SAR is a document financial institutions must file with FinCEN if they suspect money laundering or fraud.

Listed in the indictment, but unnamed, is a “co-conspirator,” Ms. Edwards’ boss, one of the six FinCEN associate directors. FinCEN won’t say where Ms. Edwards worked, or who her boss was. One of the FinCEN ADs, Thomas Ott, worked for Fusion GPS collaborator Bruce Ohr at the Justice department.

Ms. Edwards had 24,000 SARs on the flashdrive the FBI caught her with. The principal beneficiary of her leaks was Buzzfeed reporter Jason Leopold, who also may be in legal jeopardy.

Leopold is scrubbing his social media accounts, but is a little late.

Coincidentally (or not), Ms. Edwards was arrested on the very day Deputy Attorney General Rod Rosenstein told inspectors general how important it is to catch and punish leakers.

As the midterms near, leftist violence is accelerating.

A letter the letter-writer claimed was infused with the deadly poison ricin was sent to the home of Sen. Susan Collins, the Bangor Daily News reported Monday (10/15).

Sarah Anderson and Shane Mekelund, GOP candidates for the state legislature in Minnesota, were assaulted in separate instances Wednesday (10/17), the day after a spokesman for the state Democrat party called for beheading Republicans.

A Long Island man has been arrested for threatening to kill two U.S. senators who voted to confirm Brett Kavanaugh.

“If there’s collateral damage to people who don’t share our views, well so be it,” Nancy Pelosi said in an interview last Sunday (10/14).

Sen. Heidi Heitkamp (D-ND) was likely to lose before this. Now she’s absolutely, totally dead meat… and could be in legal trouble. Heidi even screwed up her apology.

Kyrsten Sinema, the Democrat candidate for the Senate in Arizona, likes the Taliban better than she likes Arizonans.

Sen. Bill Nelson, who set up a Web site that diverts people who want to contribute to the victims of Hurricane Michael to Act Blue, the fund raising site for the Democrat Party, has come out with an ad accusing Gov. Rick Scott of “dodging voters” by focusing on hurricane relief.

A poll indicated that by a 40 percentage point margin, Floridians approve of Scott’s relief efforts.

James O’Keefe, perhaps the only real investigative journalist left in America, has caught Sen. Claire McCaskill in a big lie.

In a suicidal fit of desperation, McCaskill demanded O’Keefe be investigated for exposing her deception, thus giving more exposure to the deception than O’Keefe could have managed by himself.

If polls showing a tight race for control of Congress make you nervous, you’ll feel better after reading this thread from Larry Schweikart.

Larry, a historian by trade, adds this: 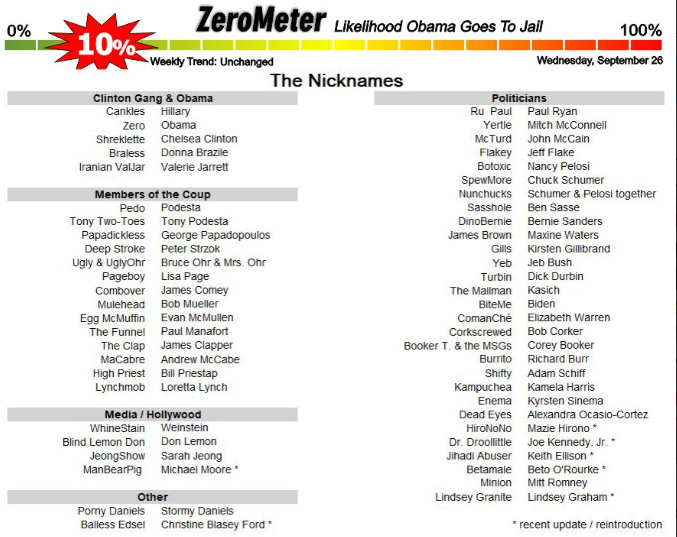 “NEVER in that time has anyone gained senate seats and lost control of the House, and certainly not gained 4-6 senators.”

Humorist Scott Adams (Dilbert) – one of the few, and perhaps the first, to forecast Trump’s win in 2016, predicts in the midterms we’ll see “the greatest turnout by Republicans, maybe ever.”

That’s a wrap for this week. Jack Wheeler will be back next week.