As you read in TTP on Wednesday (10/14), a Yuge October Surprise for Lyin’ Joe blew up his campaign.  Which is why, instantly, our entire fascist media/social media went into their Police Detective Frank Drebin (Leslie Nielsen) in Naked Gun Act: “Nothing to see here, folks, move along.”

POTUS explained what happened at his rally in Des Moines on Wednesday evening:

By then, however, the Hunter Email story was no longer just about corruption in Ukraine, with the NY Post headlining: Emails reveal how Hunter Biden tried to cash in big on behalf of family with Chinese firm.  By yesterday morning (10/15), POTUS was on it: 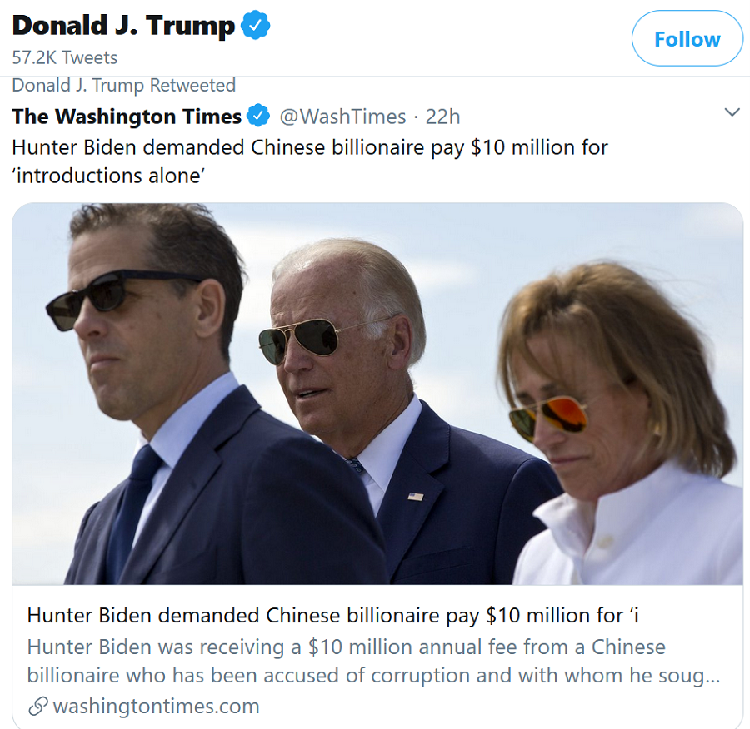 Last night (10/15),the New York Post reported: Biden doesn’t get one question on Hunter Biden exposé at ABC News town hall – in 90 minutes, nothing but softballs from moderator George Stephanopoulos nor, magically, by those in the hand-picked audience.

“Many advance an overly broad interpretation that in some cases shields social media companies from consumer protection laws in a way that has no basis in the text of Section 230. The Commission’s General Counsel has informed me that the FCC has the legal authority to interpret Section 230.

Even though the days of Big Tech Radical Left Bias may now be numbered, there is a far bigger story here. Yesterday, Members of the House Judiciary Committee sent this letter to FBI Director Wray: 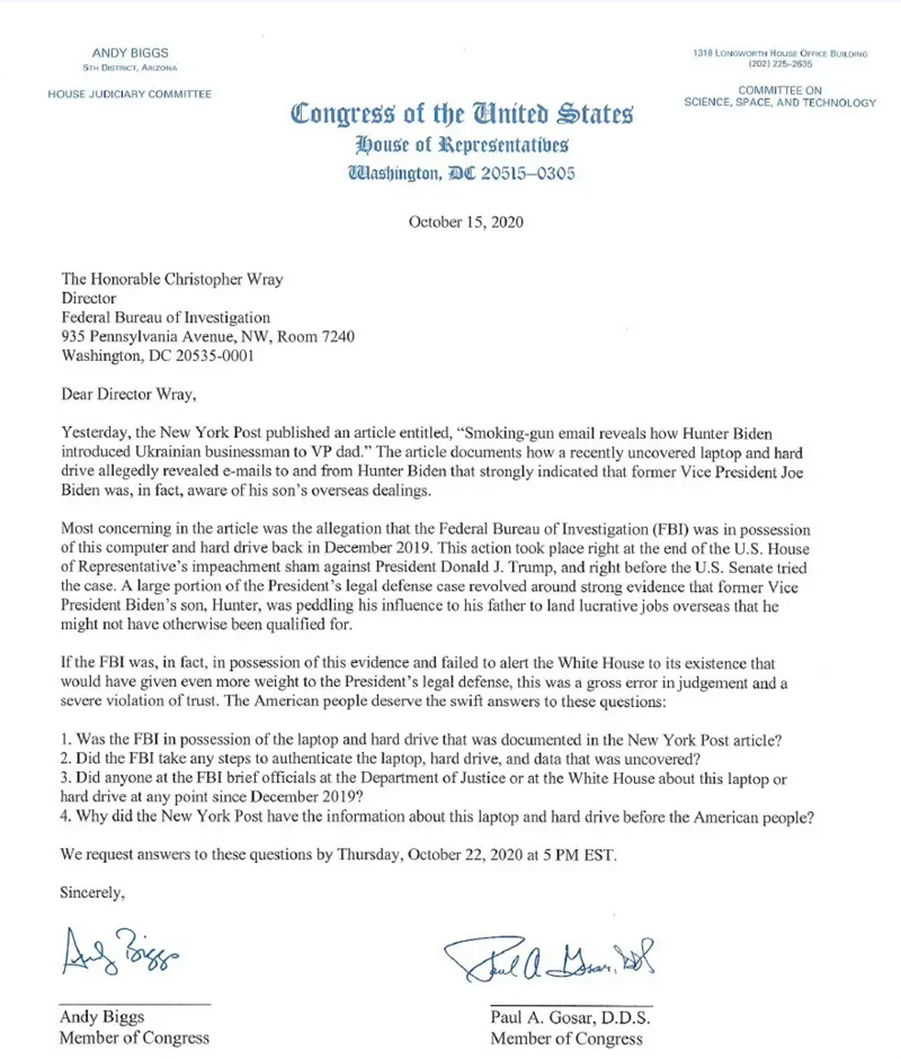 Fox interviewed the computer store owner on how he turned Hunter Biden’s MacPro over to the FBI in the Fall of 2019.  The FBI did nothing, ignored the crimes being committed by a US Vice President, gave the Biden Mafia Family a complete pass – and this during Pelosi’s impeachment of the President over a phone call to Ukraine, with the computer contents exonerating the President.

That means the nation’s top government law enforcement agency is irretrievably corrupt.  On TTP back in April 2018, Roger Simon wrote: The FBI Needs To Be Dismantled. Proof positive it needs to be now.

FYI – the rumor all over Capitol Hill is that at some point soon after Nov. 3, POTUS will fire Chris Wray and appoint – along with a full presidential pardon, Lt. Gen. Michael Flynn as Director of the FBI.

A must-read is at AT today (10/16), Mark Anderson’s Buckle up: Hunter Biden laptop scandal may be about to get a whole lot worse – for the Dems.  That’s because Rudy Giuliani, now POTUS’ personal attorney, former NYC Mayor, and US Attorney for New York who put Mafia family members in prison.  He knows how to prosecute.

Rudy has the full contents of Hunter Biden’s own laptop.  In addition to thousands of “disgusting photos, some of which are criminal,” he says, there are videos and emails with “actual evidence of payments, the money-laundering scheme they used,” “illegal money for bribes,” and how “some of that money from Ukraine … went to Joe Biden.”

Here’s the video Mark is talking about, a Newsmax interview of Rudy yesterday:

Incidentally, there is a definite way to prove authenticity of an email.  It’s easy to access the ”raw message” metadata of an email showing hundreds of lines of code showing the exact server path the email went through with time stamps.  It’s very hard to forge, and would take many thousands of hours of the best professional coders to systematically forge the 11,500  emails on Hunter’s hard drive.  That’s how Rudy can say the hard drive is authenticated as Hunter’s.

An ACB Update.  It’s smooth sailing.  “Smartest, most qualified SCOTUS nominee I’ve ever seen,” is the sort of comment you hear in the Senate halls.  Pubs are celebratory, Dems are resigned.  One Pub comment on the futile Dem efforts to “get” her in her testimony:  “You cannot con or trap a woman who has seven children. She has heard them all.”

The joke that gets the most laughter among GOP Senate staffers:  “Barrett vs. Dems is like Einstein teaching physics to chimps.”

Here she is, deftly sticking it to Chris “Clown” Coons:

Here’s the schedule now:  On or before next Thursday the 22nd, Graham will hold a committee vote to approve and advance the nomination to the Senate Floor.  Any “quorum” shenanigans by Schumer will be brushed aside by McConnell.  The Floor vote by at least 52 to confirm will be on or before Tuesday the 27th, with Justice Barrett sworn in and seated one week before Election Day.

Note in her testimony, she refused to recuse herself from any case involving the election.  A 6-3 (at best 5-4) Court just in time.

Now let’s talk about Michael Anton’s The Coming Coup  in TTP yesterday.  It’s very well done and frighteningly informative – why we published it.  Yet it has holes.  Here’s a half-dozen.

For one, Michael doesn’t take into consideration that Donald Trump will remain as President of the United States and Commander-in-Chief of the US Military, win or lose, until noon, January 20, 2021.  He could order the arrest of Joe Biden for criminal and treasonous activities for which there is an overabundance, for example.  Kamala Harris would not be advanced to the presidency as Biden wouldn’t have been inaugurated yet.

For two, he says nothing about Supreme Court decisions that could shut down the whole Dem voter fraud scam essential to his coup plot, especially with ACB on the bench.

For three, he says nothing about the largest armed force in America being Pennsylvania deer hunters, followed by those of Michigan and other states – guys who are well-armed, know how to hunt, hide, and fire accurately at distance.  A lot, if not the majority of them voted for Trump.

For four, there just is no way enough American soldiers are going to obey orders to kill their fellow Americans whose only crime is not tolerating their votes – and their country – stolen from them.

For five, according to the National Shooting Sports Foundation (NSSF), there are five million new gun buyers in the US this year through July alone, that ammo sales have surged 130%, and “The highest overall firearm sales increase comes from Black men and women, who show a 58.2% increase” from last year.

Criminals and BLM/Antifa predators don’t buy guns at a gun store with background checks – they buy stolen weapons on the street.  These Black men and women (their ethnicity is shown on background checks which NSSF tabulates) are arming themselves for protection against the predators.  They’ll be on our side – huge numbers of Blacks, and Latinos, will be voting for Trump.

One fundamental reason is that Blacks respect and vote for the Strong Horse, a leader with guts and power – they despise Girlie Men. Easy to see who’s the Large and In Charge Big Guy, and who’s the Senile Pussy in this race.

And for six, bogus polls are losing their phony oomph.  The only pollsters you can trust at all are Rasmussen, Zogby, and Trafalgar – unless they ask the right questions (see below).  A week ago Rasmussen had Trump down by 12, this week by five.  Zogby’s latest shows a dead heat – but that’s two weeks old. Trafalgar yesterday (10/15) is predicting a Trump electoral win in the mid-270s.

Two keys – the momentum towards Trump is clearly building, certainly not receding.  Second, the most reliable poll is not to ask who the person polled will vote for, but who they think their neighbors will vote for.  In those, Trump wins by a landslide, e.g.:

The other far more reliable poll is not to ask who will the person polled vote for, but who they expect will win.  Gallup does this and here is their latest:

“The poll asked, regardless of whom they personally support, who Americans think will win in November. Gallup found that 56 percent of Americans expect Trump to win over Biden, while 40 percent think Biden will win.”

Nonetheless, Anton is right to warn of violence and chaos by the Left should Trump win or the election in doubt.  If you’re in an area where this may happen, Skye advises to buy a police radio frequency scanner (unless the police radios are encrypted).  Then tune in whenever you’re in area to find out if it’s safe.  That includes suburbs of urban areas – BLM/Antifa thugs will be attacking them with people in their homes.

Skye also has a mind-blow Forum post with advice on kinetic protection from this.  It’s appended below.

“A six-month survey of battleground ‘swing voters,’ those who chose Barack Obama in 2012, then President Trump in 2016, has found that most not only plan to stick with the Republican but expect him to be reelected by a wide margin.

Overall, the survey said that 68% of swing voters polled in Minnesota, Ohio, Pennsylvania, Michigan, and Wisconsin are voting for Trump.”

Note those “expectations to win” metric again.  And that if POTUS carries those states mentioned, it’s in the bag guaranteed.

Last night’s NBC Townhall with the President had two charming moments that helped overcome the obnoxiousness of moderator Savannah Guthrie.  There was this lady who made the President blush by telling him, “Mr. President, you have a great smile. You’re so handsome when you smile!“:

Then there was the red-masked “mystery lady” who stole the show sitting behind Trump nodding and giving him the thumbs up.  She’s Mayra Joli. 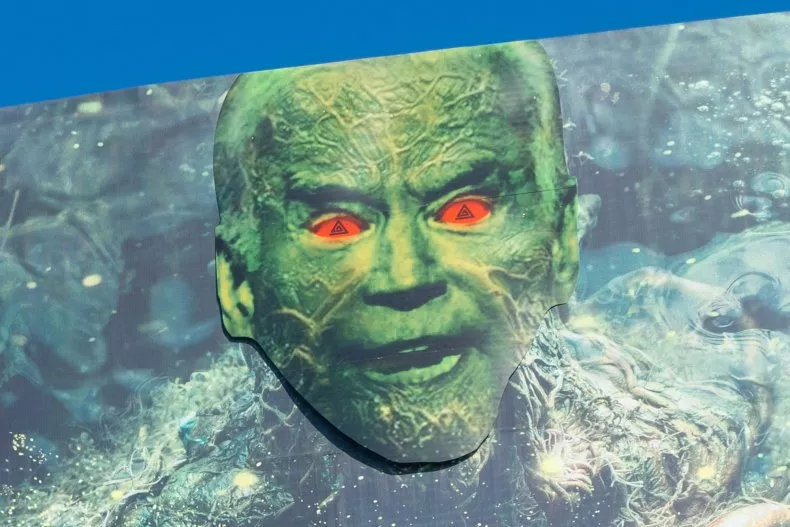 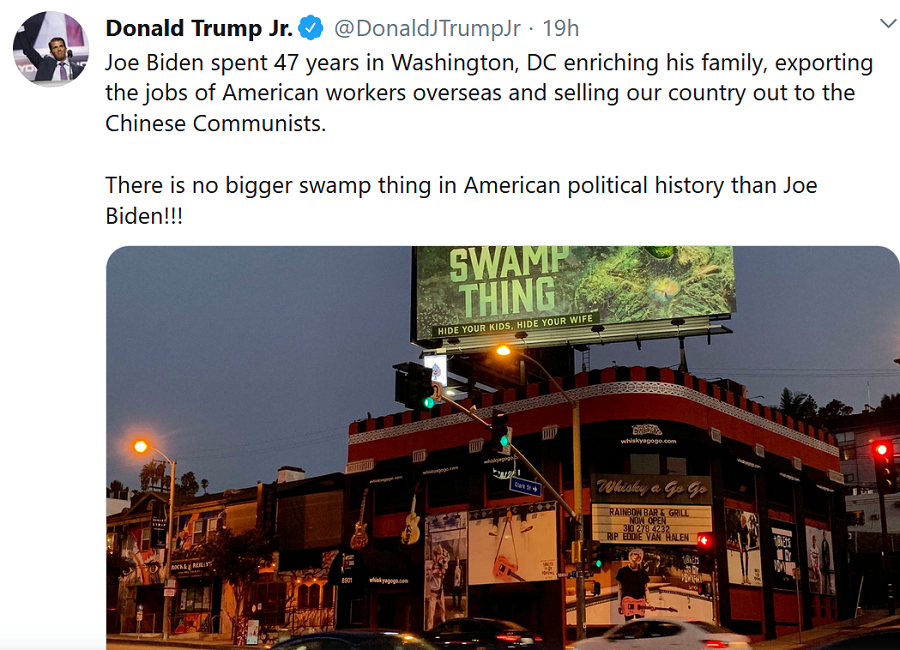 With respect to kinetic options, I highly recommend the 6.5mm Grendel from Alexander Arms in the AR15 platform (more energy and less wind drift, and less drop at 1000 yards than the 7.62 NATO cartridge), and for over about 600 yards  to a mile, the 6.5mm Creedmoor in the AR10 platform from Shaw Custom Rifles:

For relatively close work, I love my 5.56 NATO cartridge IWI (Israeli Weapons Industries) X95, a 24 1/4″ long bullpup with a 16″ barrel and a good (really!) trigger pull.  Great for shooting coyotes that are trailing a cow that is about to deliver a calf from the cramped cab of my 4×4 ranch truck.

The X95 is the semiauto version of the Israeli infantry rifle with a 1/4″ spacer added to the buttplate to make it USA legal without an NFA permit.  It uses the same mags as any standard AR15.  It is built like a tank.

Make sure that you get the current model; the first generation had the usual mediocre bullpup trigger pull.  If you want a true match grade trigger, Brownells sells a match grade drop-in upgrade for the IWI X95.

The X95 isn’t cheap, but it will last a long cautious lifetime and work reliably with minimal cleaning in a dusty desert environment, something that cannot be said for the AR15.