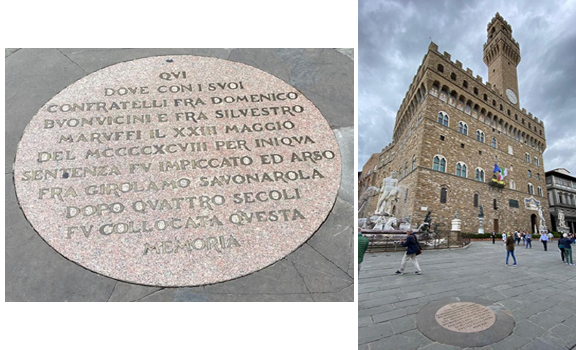 Florence, Italy.  Below the Palazzo Vecchio, Florence’s town hall built in the 1300s on the Piazza della Signoria, Florence’s main public square, you find this granite/bronze plaque embedded in the pavement stones.  It is ignored by the hordes of tourists anxious to take photos and selfies of all the statues adorning the Piazza, such as the copy of Michelangelo’s David.

Yet this is where the real history took place, for at this spot on May 23, 1498, the people of Florence put an end to the destructive insanity destroying their city.  The plaque commemorates where the leader of the Taliban of the Renaissance, a mad monk named Savonarola and two accomplices, were hung on a gallows cross and burned to ashes. 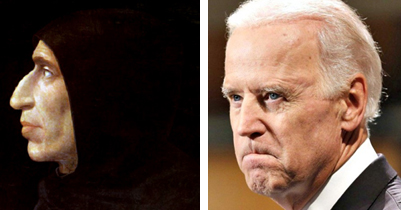 Savonarola’s reign of terror is historically infamous for his Bonfires of the Vanities (falò delle vanità), burning priceless books and works of art as objects of sin by his devotees known as Piagnoni (Weepers, people of tears) in an attempt to destroy the culture of the Renaissance.

When the Florentines finally rebelled against this madness, they considered it fitting that Savonarola was burned to death at the very spot where his “vanities” bonfires took place.

The Woke Left with their cancel culture and Critical Race Theory madnesses of hate are the Piagnoni of today, attempting to destroy the culture of America.  Yet with each passing week, we get closer to full scale rebellion against the madness, and thus closer to the day when their cultural influence and the careers of their political leaders will be burned to ashes.

We certainly got significantly closer this week. 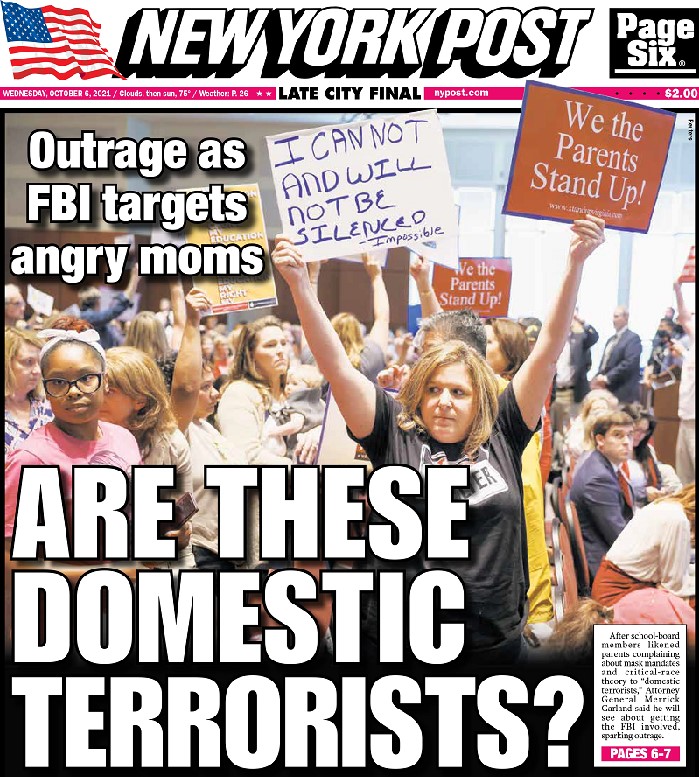 The answer is: the real domestic terrorists in America are the mafiosi of the DOJ and FBI led by their fascist overlords Garland and China Joe.  As so ably explained by Andy McCarthy in Wednesday’s TTP (10/06), the federal government has no general police power, thus the FBI has no legal authority to investigate, much less threaten in any way, parents protesting Commie-Nazi policies of their local schools.

What is needed is governors with the moxie to direct their state attorney general to order the arrest of any FBI agent engaging in any harassing “investigation” of any protesting parent in their state.  Agents need to be prosecuted personally for exceeding their lawful authority.

And those running for governor, like Glen Youngkin in Virginia.  In response to his Dem opponent Terry McAuliffe announcing, “I don’t think parents should be telling schools what they should teach,” Youngkin launched a “Parents Matter” program.  In support of this program, consider texting him at (703) 829-5171, asking:

“I support your Parents Matter!  Upon taking office, would you have your AG order the arrest of any FBI agent harassing a protesting parent in Virginia, and prosecute them personally for exceeding their lawful authority?  Illegal DOJ-FBI intimidation of Virginia citizens must stop.  Thank you.”

In any regard, a nationwide parental response to this blatantly illegal federal overreach may be just what is needed to trigger the solution to what ails our country: mass peaceful civil disobedience.  Americans en masse must resist, simply stop obeying federalie fascists or blue state dictators.

Here is one mother’s solution and it’s a great start. Quisha King from Jacksonville FL spoke last night (10/08) at the Family Research Council’s “Pray Vote Stand Summit” in Virginia, and what she said has gone so quickly viral it was a Daily Mail headline story within hours: ‘We have to pull them out’: Florida mom calls for mass exodus of children from woke public school system after ‘final straw’ of AG Garland threatening to criminalize complaining parents.  Watch:

And here’s another.  On Tuesday (10/05): North Carolina School Board Passes Ethics Policy That Says Teachers Can Be Fired If They Teach US Historical Figures Weren’t Heroes Or Describe Racism As A Permanent Part Of Life

Is that cool or what?  The parents in Johnston County very effectively got their school board to agree with this new official policy:

Parents from all over the country should learn how this was done in Johnston County NC, then apply it to their own school boards – and tell any G-men bugging them to jump in a lake as they do it.

There is in addition a second issue just as explosive if not more so than criminalizing parents not wanting Commie-Nazi Racism taught to their kids.

Vax mandates.  Once again, this is all intimidation and no legality.  China Zhou’s vax mandate does not exist – there is no OSHA regulation published in the Federal Register nor is their any published Presidential Executive Order.

It’s nothing but a threat, and it will never be anything more, for once it is actually codified it will be instantly challenged in federal court as, for example, a clear violation of the Administrative Procedures Act that governs all fed regulation – on two grounds.

Xiden’s vax mandates are both over-inclusive – including those who don’t need it having natural immunity from getting Covid, and people, even children, across the board generally – and under-inclusive by exempting for no reason large groups such as postal workers – both of which violate the Act.  SCOTUS would toss the mandates out quickly and Xiden knows it.

The real question is who put Xiden up to this?  Hospitals all over the country are closing or must severely curtail services as they are firing medical staff who won’t get jabbed.  Truckers the same – and if 20% of the country’s truck drivers stop working so does the economy:  today’s supply chain dislocation goes on steroids.

Airlines, banks, big companies everywhere are destroying themselves by firing employees who know how dangerous getting jabbed can be.  Mass layoffs are causing mass ruination of livelihoods and possibly entire industries.  Why?  Who wants this?

Not the Dem leadership, Schumer & Pelosi et al.  They know fired people won’t vote Dem to keep them in power next year.  Big Pharma maybe, but does it have the juice to screw the entire economy?  Far more likely it’s the World’s Curse, the Chicoms.  Their goal is to destroy the US economy and they have the money and cunning to do it.

How?  Well, if I were running the NSA, I’d order a full financial and communications analysis of everyone on the White House staff who has the ear of Jill Biden.  She’s an egomaniacal airhead, easily persuadable (“Look at this study of how the vax mandate will get rid of covid – you and your husband will be heroes, Jill!!”), and tells Joe what to do like no one else.  Chicom bribery of WH staff close to her is where I’d look first.

Again, in any regard, mass ruination of livelihoods due to vax mandate fascism could easily be another trigger of mass civil disobedience against federalie mafiosi and blue-state tyrants.

In fact, odds are rapidly growing that we’ll get both triggers.  Add in inescapably escalating inflation on everything needed to live like food and gas, and you have a Hat Trick of National Rebellion against Dems and China Joe.  Just be prepared, for when this happens, it will happen overnight.

After all, already Louisiana’s good ol’ boy senator John Kennedy observed this week (10/05), that “Biden is about as popular as a fever blister.”

So… here’s a real eye-opener.  Dave Chappelle is an immensely famous comedian, called “America’s comic genius.”  Lately, however, the woketard cancel culture mob has been in a frenzy to destroy him because he make jokes about trannies, guys pretending to be women.  Few things are more out of bounds for the LGBTQWTF woke left than this.

Well, guess what happened to Dave Chappelle last night (10/07).  He performed at the Hollywood Bowl in front of an all-star Hollywood celebrity audience of 18,000, including Brad Pitt, Stevie Wonder, and many many others.  He told “transphobic” jokes, said of Twitter’s war against him, and NBC’s, ABC’s and CBS’s, “F… Twitter, F all those stupid a.. networks.  I’m not talking to them – I’m talking to you, this is real life.”

Whereupon the entire 18,000 Hollywood celebrity audience gave him a standing cheering ovation.  With his arms outspread and a huge smile, he loudly responded, “If this is being canceled, I love it!”

Here’s the story: Hollywood Stands for Chappelle and Against the Woke Gestapo.  Read, enjoy, be amazed, and realize that the times are about to be a-changing.

Speaking of change.  No prediction as she’s weird and unpredictable, but don’t be shocked if Dem Senator Kyrsten Sinema gets so sick and tired of Xiden supporting the disgusting woketard harassment of her – for refusing to vote for the $5 trillion Dem boondoggle – that she flips the Senate.

With a 50-50 Senate, one D to R party switch flips control.  You know McConnell is wooing her and Schumer is scared.  Might happen.

Meanwhile, this just in (10/07): GOP Support For Trump Surges, Most Reject Anti-Trump Critics.  I think we’ll all drink to that.

The ultimate example was Pope Julius II asking Michelangelo to leave his Florence home to come to Rome and the Vatican, where from 1508 to 1512 he created the greatest artistic masterpiece of all Western Civilization, of all civilization period.

Two evenings ago, Rebel and I with our TTPer friends were privileged to have a private viewing of the Sistine Chapel.  No crowds, no one else, just a small group with a Michelangelo expert explaining what we were seeing.  All you can do is gape in awe and wonder at what human beings are capable of. 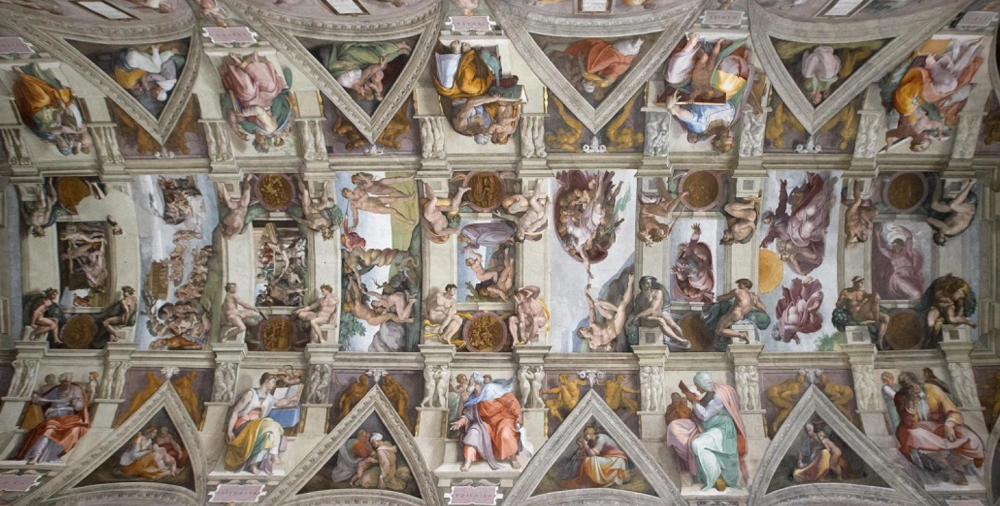 And what they are capable of triumphing over.  America is today in a state of a mass madness.  But day after day now, we see rejections of it.  America will triumph over this madness before very long.  America will be America once again.

In closing, let me thank Mike Ryan for writing such an interesting and thought-provoking HFR last week.  I really appreciate it, Mike, and I’m sure TTPers did as well.

And lastly, a note to TTPer Sally Ernsberger, who said in the Forum she wished she could be with us, and that I should have a good tiramisu for her.  I did just that, Sally, when we discovered the best tiramisu in all Italy is at La Giostra in Florence.  We’ll be there again, Sally, and I hope then you’ll be with us.