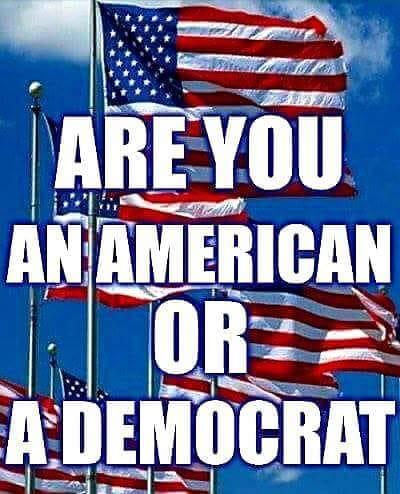 He (or she) has done something for which there is no excuse, it is irretrievable, there is no hope of recovery or salvation.  No more suspicion, the plot is now fixed and must lead inevitably towards the hero destroying the villain in a climactic confrontation.

We are living this movie right now.  We are one month away from its climax.

Most all times in our lives as individuals or those of a country, an issue is not black and white.  There are arguments on both or various sides, and we must choose where the preponderance of good lies, choose which side has more assets than liabilities.

Not this time.  Not this election on November 6.  The Democrats’ criminally deranged and morally disgusting behavior towards Judge Kavanaugh and his family is irretrievable.  They have proven beyond doubt to be an evil that must be extinguished electorally.

There is now no moral excuse for voting Democrat.  Are you an American or a Democrat?  On November 6, you cannot be both.

There’s no way to resist asking this.  Out of curiosity:  why is Christine Blasey “Two-Door” Ford the oldest looking 52 year-old woman in America?

She of course has perjured herself up the ying-yang.  She’ll be very lucky to avoid the slammer.

Debbie Ramirez is such a fruitcake she might avoid being Two-Door’s cell mate.

Enjoy the President ridiculing and denouncing the evil of all this in Mississippi on Wednesday night (10/03):

While we’re at it, how about the President torching an obnoxious reporter at his Rose Garden presser Monday (10/01) on the USMCA replacement of NAFTA?

At that same Rose Garden presser, he obliterated Da Nang Blumenthal, Spartacus Booker, and Chinese Feinstein.  This is cool:

This early morning’s (10/05) lead headline on Drudge was:

Frankly, the pure naked criminal insanity of Dems/Lefties over Kavanaugh leaves me speechless – and it’s getting worse by the hour now it seems.

Extraordinary Popular Delusions and the Madness of Crowds you can understand if it’s some goofy thing like tulips, but this is infinitely more dangerous.  The US went criminally genocidally insane in the Civil War, with the emotional trigger of slavery — now the trigger is abortion.

People willing to fight and die in titanic rage over what they believe is their deepest moral right to enslave, or murder in the womb, another fellow human being should be incomprehensible to anyone normal and sane.

Finally it is dawning on even the extreme libtards at the Daily Beast that “Democrats’ Obsession with Kavanaugh Could Backfire” (10/04).  Ya think?  Maybe.  Like, maybe the sun will rise in the east tomorrow.  Could happen.

What the Dems have done is unleash the Kraken.  And not just that of countless millions of voters.  Most refreshingly amazing is what’s happened to Pub Senators we used to call Rinos.  Lindsey Graham is on fire. Same with Chuck Grassley and Mitch McConnell.  Now watch what happens when a bunch of Soros-paid brats try to pull a Jeff Flake Elevator stunt on Orrin Hatch yesterday (10/03):

“When you grow up, I’ll talk to you.”  Then he dismisses them with a wave and a smile saying “Bye-bye,” as the doors close upon their mouth-foaming faces.  A true ROTFLMAO moment.

Also as you know, the first four voted No on Cloture this morning, with Manchin being the only Dem Yes vote.  Donnelly is so brazen he’s actually fundraising off his No vote.

Manchin might save himself by voting to confirm tomorrow (10/06), but with the other four losers being “toast” as Sen. Joni Ernst (R-IA) puts it, it’s a Kavanaugh-pocalypse for the Dems.  Pubs are going to gain 3-5 seats in the Senate, adding to their majority instead of losing it.  Hubris brings down Dike, Justice, upon its possessor, believed the Ancient Greeks.  Looks like this age-old wisdom is still true.

On Wednesday (10/03), TIME Magazine reported who the favorites were to win the Nobel Peace Prize for 2018.  At the top of the list were Kim Jong-Un and Moon Jae-In of North and South Korea.  That meant that the person responsible for their historic peace-making would have to be included.

Since that is President Donald Trump, the Norwegian Nobel Committee wimped out, and announced this morning (10/05) that the prize would go to two people nobody ever heard of, Denis Mukwege and Nadia Murad.

It is ironic in the extreme that Murad, a Yazidi lady once a sex slave of ISIS, was awarded for activist attempts to “bring ISIS militants to justice for war crimes.”  Ironic because, although not to make light of Ms. Murad’s efforts, they are microscopically miniscule compared to what President Trump has done to bring ISIS to justice by wiping it out.

Once again, the Norwegians spit in their own faces and make a mockery of their once-prestigious prize.

There’s a presidential election in Brazil on Sunday (10/07).  Expect the global media to set their hair on fire when Jair Bolsonaro wins in a Trumpean landslide.

Bolsonaro is called “the Brazilian Donald Trump” because what he often says is so scandalous that it shocks the Brazilians – and that takes a lot, a lot more than we’re used to.

Last June during a debate in Congress, Bolsonaro said minors should be treated as adults if they commit “heinous crimes such as murder and rape.”   A Communist Party congresswoman, Maria do Rosario, angrily shot back at Bolsonaro, calling him a “rapist.”

Instead of getting mad, Bolsonaro turned to his congressional colleagues nearby to say with the microphone on, “She’s not worth raping – she’s too ugly.”

That’s rough Brazilian humor for you.  In truth, she’s not very attractive, but what she really is, is a wacko commie.  Here’s a video of her yelling and screaming at a fellow parliamentarian on his 70th birthday in the halls of Congress.

Brazil is the 5th largest country in the world at 210 million people, and in area (3.2 million square miles).  It is the 800 pound gorilla of South America.  And on Sunday it will have a president who admires President Trump, who intends to have a Trumpean economic and foreign policy. Brazil after Sunday will be America’s ally and friend.

Let’s wish Jair Bolsonaro all the best in his quest to “Make Brazil Great Again.”

The Bloomberg headline yesterday (10/04) was devastating:  China Used a Tiny Chip in a Hack That Infiltrated U.S. Companies.  It’s opened many eyes on how massive the Chicom cybersecurity threat is.

Some three years ago, I had a long conversation with a fellow in DOD cybersecurity.  He was in extreme frustration because he and his colleagues had all the means to take down any and all aspects of Chicom cyberspace as its vulnerabilities are prodigious — but were always refused the greenlight to do so.

It would give away our capabilities was always the excuse.  That was in the Zero years. Maybe PDJT will be ticked enough now to order a lesson for the Chicoms they won’t forget.  It’s about time.

It’s mid-afternoon now, and the lead headline on Drudge has changed:

As have the kicker headlines above the lead.  Aren’t they glorious:

This is called Winning!  Big time.  To that we can add:

Now it’s 4pm in DC.  The suspense during the hours since the Cloture vote was 51-49 with Murkowski voting No and Collins Yes But, saying she would deliver her decision on her Confirmation vote this afternoon has been excruciating.  After an extraordinary hour-long Floor speech, Collins said she’ll vote Yes to Confirm tomorrow.

So that’s it.  Even without Murkowski, Judge Kavanaugh will be confirmed in less than 24 hours from now.  He will be sworn in on Sunday (ideally by Justice Clarence Thomas), and take his seat as Justice Kavanaugh on the Supreme Court on Monday, October 8.

This has been a rough roller coaster ride for all of us, but as the Bard would say, All’s well that ends well tomorrow.  Saturday evening will be a time to pop the corks.

This will be a historic victory for America, and a disastrous defeat for the Dirtbag Dems.  It’s a moment the Ancient Greeks like Aeschylus would deeply appreciate – how monumental hubris can drive the high and mighty to lunacy and doom.

The most Schadenfreudelicious part is that the Dems brought this completely upon themselves.  Self-destruction on stilts and steroids.  Not even Jeff Flake helped them.  Turns out his delay for a 7th FBI investigation screwed the Dems even more.  POTUS saw this in a New York second – note how immediately he asked the FBI to do what Flake requested.

Now a huge Red Wave is clearly on the horizon, while what the Dems have got is a Blue Ebb Tide.  They no doubt will try to pull off any number of October Surprises in the next 32 days, but the bet should be they will be acts of desperation and panic transparently so to everyone.

What we can count on is all the October Surprises our POTUS has in his back pocket.  They will be doozies.

We close with a video that I have been looking for since October 2005.  It was of a speech I gave entitled Why Liberals Are Incapable of Defending America. The link is to the text only.  Somehow, after all these years, it’s suddenly on YouTube.  I start out showing the audience a human shrunken head.  I hope you enjoy it: 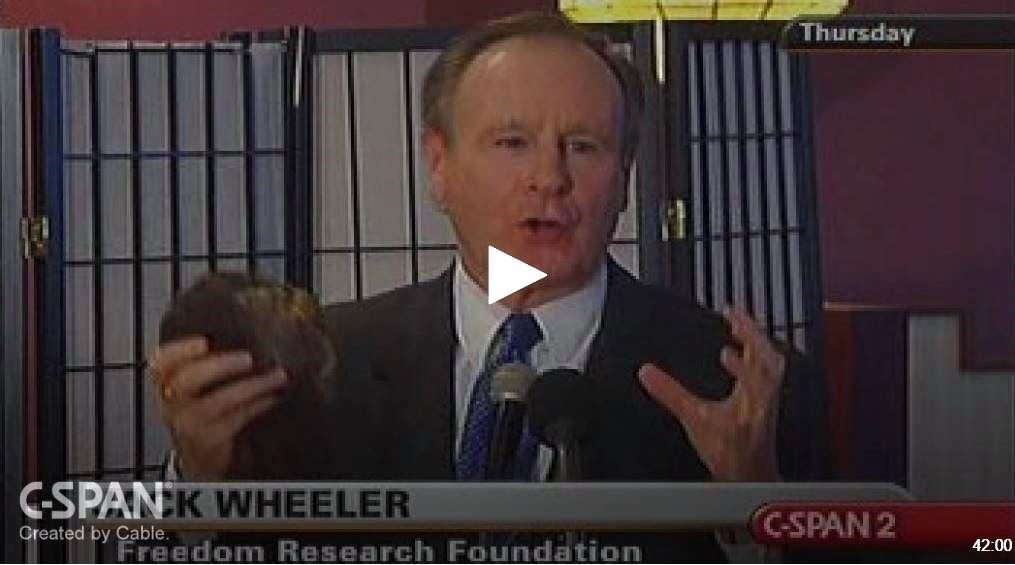