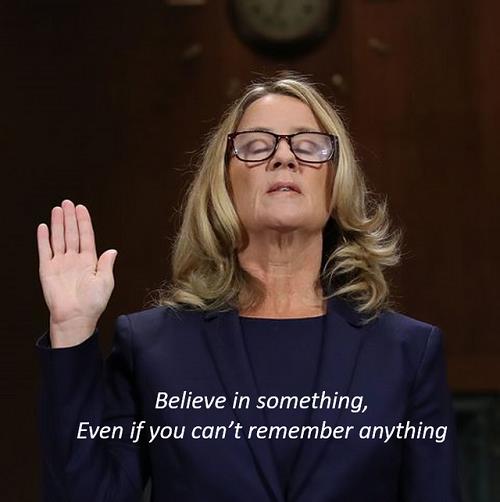 Jack Wheeler asked me to fill in for him on the HFR this week. What a week it’s been!

After yet another stunt by the despicables, the Senate Judiciary Committee voted, 11-10, this afternoon (9/28) to send to the Senate floor the nomination of Judge Brett Kavanaugh for the Supreme Court.

There was to have been a cloture vote Monday, a confirmation vote Tuesday (10/2).

But late today, President Trump ordered the FBI to conduct a supplemental investigation to update the file on Judge Kavanaugh. The investigation is to be limited to current allegations, and completed in less than a week.

The president issued the order because Sen. Jeff Flake requested it at the Judiciary Committee hearing today.

The president’s order gives cover to the three GOP squishes – Flake, Susan Collins of Maine, Lisa Murkowski of Alaska – and to Democrat Joe Manchin of West Virginia to vote for Kavanaugh, and will keep the moonbats off their backs until the vote.

Manchin is up for re-election in the most pro-Trump, pro-Kavanaugh state in the union. A poll this week indicated he is tied, at 45 percent, with his GOP opponent. Manchin is toast if he votes against Kavanaugh.

Another Dem, Heidi Heitkamp, may vote yes because she’s toast in North Dakota if she doesn’t. If Heidi votes against Kavanaugh, it’ll be because she figures she’s going to lose anyway.

Flake caused hearts to flutter when he said he might vote against Kavanaugh unless there is another one week delay for the FBI to investigate. But this was largely kabuki.

What happened in the Judiciary Committee today was Flake (wittingly or not) acted as a Judas goat to get the Dems to make a quorum. Grassley then sandbagged the Dems by calling the vote. He did not agree to Flake’s request, but Flake voted yes anyway.

I wrote in my TTP column yesterday about how Grassley has made concessions that were more apparent than real, to move the ball along.

President Trump’s order this afternoon is in the same vein. At the cost of a few more days, the last Democrat excuse for delay will be exhausted.

It’ll be the Democrats who mostly pay for the delay. As I noted in that column, Senate Majority Leader Mitch McConnell will keep the Senate in session until there is a vote on Kavanaugh.

The longer the vote is delayed, the less time Red State Dems seeking re-election this year will have to campaign.

And the more the Kavanaugh brouhaha grows, the more attention voters will give to what for Red State Dems is a lose-lose vote.

It won’t take the FBI long to investigate, because there is no there there. And when the FBI concludes there is no substance to any of the accusations, Democrats will look even worse than they do now.

The patient interrogation of Christine Blasey Ford Thursday uncovered further discrepancies in her story which now will get more attention.

She can’t remember where or when, she can’t remember who brought her or took her home, and no one has come forward to say “I drove her.”  All she can remember is the “indelible memory in my hippocampus” of the boys laughing at her.  Right. 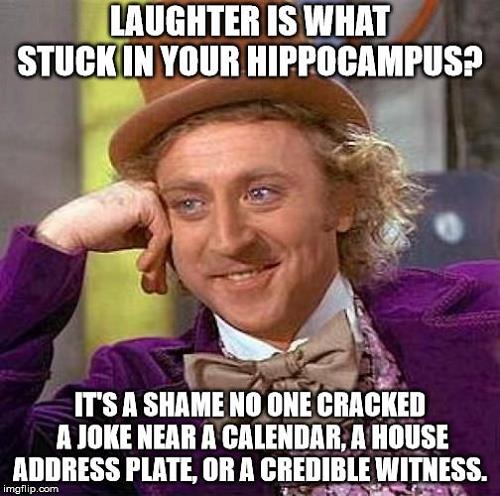 Trump’s order (which, effectively, puts the kibosh on any further bogus accusers coming forward) guarantees that Brett Kavanaugh will be confirmed; that there will be a conservative majority on the Supreme Court for the first time since the 1930s.

If you’re wringing your hands, fear that all is lost, Unseen1 has a cure for battered conservative syndrome.

The outcome was in doubt until Judge Kavanaugh made his impassioned statement at the hearing yesterday. The righteous indignation of an innocent man falsely accused, the pain he and his family have suffered from baseless smears showed through. If you didn’t watch it live yesterday, watch it now:

“Judge Kavanaugh showed America exactly why I nominated him,” President Trump tweeted. “His testimony was powerful, honest and riveting. Democrats’ search and destroy strategy is disgraceful and this process has been a total sham to delay, obstruct and resist.”

Perhaps inspired by Kavanaugh, and to the surprise of many, Lindsey Grahamnesty morphed into Lindsey the Lionheart, excoriating Judiciary Committee Dems for their vileness and duplicity.

Were it not for Kavanaugh’s boffo performance, Graham’s epic rant would have been the highlight of the hearing, the highlight of every Congressional hearing since the Army-McCarthy hearings in the 1950s. If you didn’t watch Lindsey the Lionheart live, watch what history will call The GrahamSlam now:

It wasn’t just Lindsey the Lionheart who’s been eating his Wheaties. Never Trumpers Mike Lee (Utah) and Ben Sasse (Neb) took the wood to the Dems too.

Ted Cruz was eating Dianne Feinstein alive until she interrupted.

George W. Bush called GOP squishes and “moderate” Dems to lobby for Kavanaugh. Never Trump pundits such as Erick Erickson and Ben Shapiro are as furious as we are. Here’s (no longer) Never Trumper Rich Lowry explaining “Why the Kavanaugh Smears Validate Trumpian Politics.”

Thanks to the Democrat smear campaign, Republicans are more unified now than we’ve been in decades, and we’re fired up. This does not bode well for the DemonRats in November. 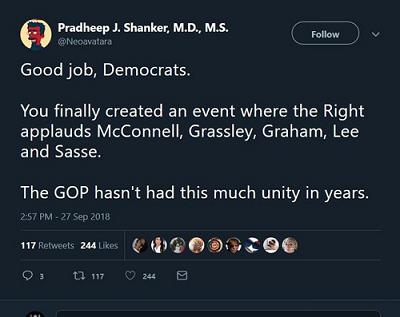 Republicans should still be fired up after Kavanaugh is confirmed. We want to punish the evil bastards for what they did to that good man and his family.

But once Brett Kavanaugh takes his seat on the Supreme Court, moonbat enthusiasm for voting likely will wane. They shot their bolt, gave it their all, and lost.

That “Progressives” would go so low to try to prevent a Supreme Court majority that follows the law rather than makes it reveals they don’t think they can get what they want at the ballot box (unless they stuff it).

There was other news this week, but it was overshadowed by the Kavanaugh drama. Because of it, the president postponed until next week a meeting with Deputy Attorney General Rod Rosenstein to discuss a New York Times report that Rosenstein had contemplated wearing a wire to a White House meeting to get evidence to invoke the 25th Amendment to remove Trump.

I think the story is bogus, especially because it appeared in the New York Times. It seems to be based on leaks from disgraced former FBI Deputy Director Andrew McCabe.

Does it indicate a falling out among coup plotters?

An attempt to goad the president into firing Rosenstein, thus providing (in the perfervid imagination of the Leftists) grounds for impeachment?

Or could it be that Rosenstein is not as black a hat as most conservatives think he is?

As Jack Wheeler and Roger Kimball noted, President Trump’s address to the UN Tuesday (9/25) was far and away the greatest speech any president has ever delivered in that body. If you haven’t watched it, or read it yet, you really ought to do so.

The president gave an equally boffo performance in his lengthy news conference (88 minutes) at the end of his visit to New York the next day (9/26).

Trump elaborated on the themes of his UN speech, urged people to watch the Judiciary Committee hearing the next day.

During the course of this press conference, the president answered almost as many questions as Barack Obama did during his eight years in office.

The Lying Swine declare Trump is a threat to a free press, but he’s answered more of their (utterly biased, abysmally stupid) questions than any president since Reagan. The Enemedia just don’t like the answers.

We close with the Kavanaugh drama still unsettled (kind of), but I declare the glass this week way more than half full. We’re winning, winning big on the Supreme Court, and for the midterms.

Heroes of the week are Brett Kavanaugh and Lindsey GrahamSlam Lionheart. Spinus Republicanus isn’t extinct after all.

I don’t know what Brett’s favorite brand of beer is, but I’d like to fill my nearly full glass with it in a toast to them.

Here’s the future.  Count on it.  THE TRUMPINATOR: 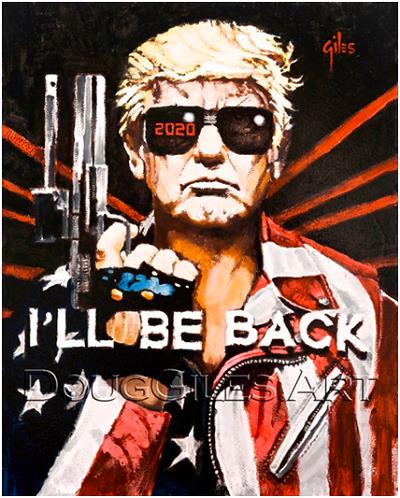 Speaking of who’ll be back, Jack Wheeler will be next week.  In the meantime, he hopes you’ll join him on his expedition to Ice Palaces and Jungle Tribes early next year.