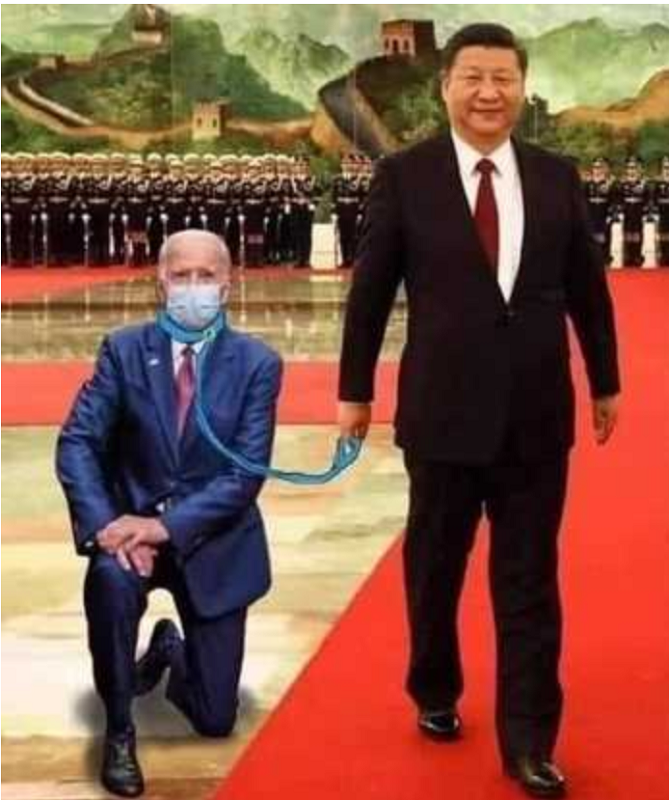 You may have seen this meme before, but it’s here now as it explains every single one of the multiple disasters currently befalling our America.

It was Xi who created the Chicom Virus pandemic by locking down Wuhan from the rest of China while organizing tens of thousands of infected Wuhan Chinese to travel to America and all over the world in late 2019-early 2020.

It was Xi who ordered his stooge Fauci to convince Trump to lockdown the American economy, ruining the prosperity cornerstoning POTUS’ presidency.

It was Xi who had Arizona Gov. Ducey and Georgia Gov. Kemp bribed into buying rigged Dominion voting machines, as well as officials in all swing states, to ensure Trump’s loss and their puppet’s fraudulent win last November.

It was Xi who carefully wove a web of blackmail around their puppet using his utterly corrupt drug-addict son, so that once installed in the Oval Office, the puppet would follow orders to unleash a cornucopia of catastrophes upon America – all with the unwavering support of key media/social media leaders and influencers on the Chicom payroll. 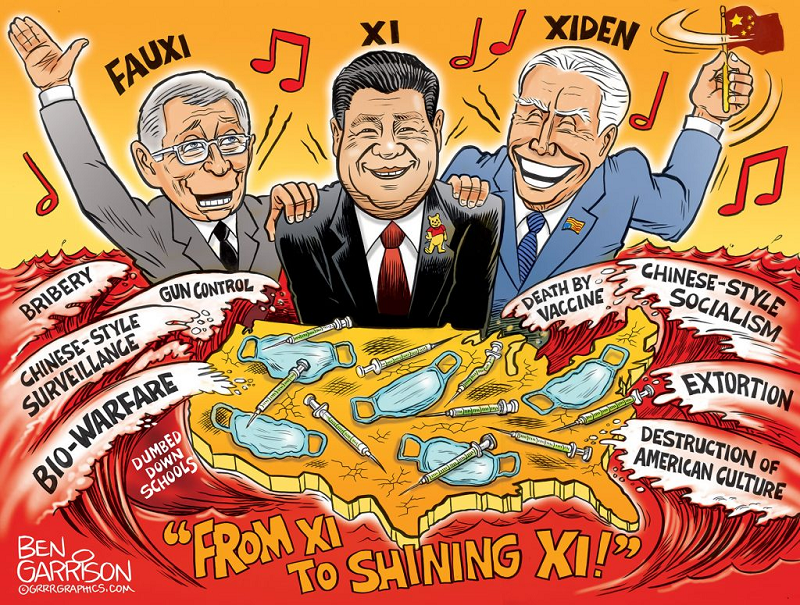 Yes, all this is treason.  The man inaugurated as President of the United States is a bona fide traitor to his country.  To what extent those in cahoots with him are knowing accomplices or merely useful idiots only time will tell.

So, what is to be done?  Sooner or later, it is going to dawn on tens of millions of Americans that the president of the US is in league with the president of Communist China with the mutual intent of destroying their country.  When that happens, it’s best to be out of the way.  Out of any big city, out of any Blue State.  Protect yourself and loved ones first.

It will start with public recognition of the elephant in the room – or rather the refrigerator.  Dems can use what distraction they want – currently it’s vax/mask mandates to distract from the Afghan treason, the border invasion treason, the Chicom fentanyl flood treason, etc.

But Dems cannot deflect people’s eyes off what they pay at the supermarket to feed themselves and their families. As Simon Black asks this morning (9/24): Does Anyone Honestly Believe That Inflation Is “Transitory” Anymore?

The Dems of course will try.  The Next Great Distraction arrives in six days from now, Sept. 30, when every libtard in the country will start shrieking that the sky is falling because the depraved Republicans won’t raise the debt ceiling and pass a CR (Continuing Resolution) to sustain astronomical deficit spending.

“Nearly 50 million seniors could stop receiving Social Security checks for a time,” warns Treasury Secretary Janet Yellen. “Troops could go unpaid. Millions of families who rely on the monthly child tax credit could see delays. America, in short, would default on its obligations.”  In short, says HuffPo, “A debt default would be like a government shutdown on steroids.” 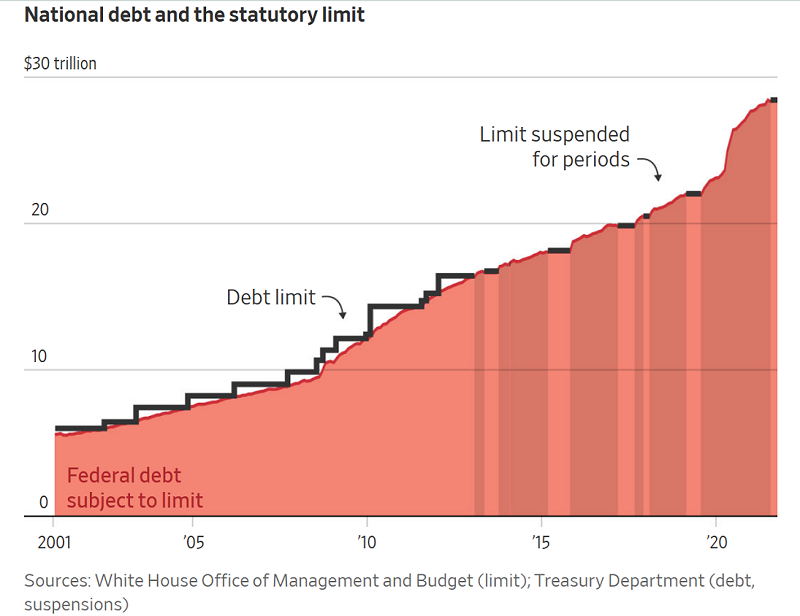 This is ridiculous, insane, and immoral

Well, bring it on – Let the Dems Drown, as Erick Erickson opines in TTP yesterday (9/23).  But be prepared.  The equity markets are in a fantastically overpriced bubble on the hope that trillions in deficit spending will continue straight to the moon.  If you’re in them, best to get out of Dodge immediamente.

There will be a plethora of hells to pay, all kinds of pain the Xiden Regime will inflict on the most defenseless in an attempt to blame the Pubs for the crisis.  But here’s the thing.  The Dems have exhausted any shred of goodwill, patience, and sympathy the public had for them, with all the endless crises they’ve caused over the last eight months of total DC power.

Which is why the Pubs in both the House and Senate are holding firm, and the debt ceiling/CR bill will go down in flames next week.  How much do they believe the public at large will blame the Dems for the coming crash and not them?

This much:  this week, the NRCC (National Republican Congressional Committee) is sending by courier a gift to the most vulnerable House Dems in ’22 – Doormats. Actual real doormats.  NRCC Chairman Tom Emmer explains:

“We are sending doormats to these lawmakers to remind them they let Nancy Pelosi walk all over them. Voters will hold any Democrat who supports Nancy Pelosi’s reckless $3.5 trillion tax and spending spree accountable.”

There is, of course, another solution to the debt ceiling problem other that increasing debt.  Anyone with a household budget knows:  cut spending.  And of course, that’s the last thing Dems want – better to stop Social Security checks to old folks is their way.

Odds are the price the Pubs will enact for eventually raising the debt is for the Dems to junk their $1.5 and $3.5 trillion “infrastructure” bills first.  But let’s see.  Just be prepared – for the next weeks to come it’s going to be as Betty Davis said:

Okay – the US equity markets bubble is about to pop.  But what about the world’s biggest bubble?  That would be China’s $60 trillion property market.  Yep, trillion with a “t.”

All the worry now is about China’s giant property developer with 65 million empty apartments, Evergrande, is about to go belly up and has begun defaulting on its loan payments to foreign lenders.  But as ZeroHedge explains today (9/24), there has been a “sudden sharp collapse” in China’s entire property market.

As this market is “20% of Chinese GDP and 62% of household wealth in China,” this is likely to result in “massive social unrest” threatening the entire Chinese economy and the Communist Party’s hold on power.

The tried and true Chicom recipe for this is, search for a foreign devil to redirect public anger.  So who do Chicoms pick?  Australia – a country with fewer people than one Chinese city (Shanghai, 25.8 million).

I hope you read this in Skye’s Links yesterday: Stunning Interview Sees China Warn “23 Million Australians” That US Pact Now Makes Them “Target” For Nuclear Attack and watched the accompanying video of this “insufferably arrogant” Chicom, Victor Gao.

What a ludicrously phony temper-tantrum, put on for show by the French.  The Aussies just figured out what a scam the Frenchies were trying to run on them.  I had a talk with Skye about it.  His explanation:

“The French wouldn’t sell Australia copies of their nuclear powered submarines, but proposed instead to sell them a diesel-electric conversion.  Really?  How does that work? A sub’s nuclear reactor and high pressure steam turbine is a small relatively light weight system.  The French proposed to replace that with larger and heavier diesel engines and a generator, a much larger and heavier battery bank, and vastly larger and heavier tanks for hundreds of tons of diesel fuel.

Once you try to stuff all that into an extant nuclear powered hull design, where is the room for the crew, the food, the life support, the weapons systems, and the electronics?  No wonder there were schedule and cost overruns.  It was a fundamentally impractical idea.  You can’t pour two gallons of milk into a one gallon jug.”

Note – as did the Australian interviewer in Skye’s link – that this is a deal for nuclear-powered subs, not nuclear-armed subs.  They are attack subs with conventional-warhead cruise missiles – not the big boomers with submarine-launched ICBMs.

Yet now it was the Chicoms’ turn to lose their minds, and threaten Aussies with a nuclear war if they bought nuclear-powered subs.  You really need to watch the Australian television interview to see how stupid this is:

First, it’s hilarious how he rants about Australia violating China’s “nuclear-free zone” in the Pacific when China has nukes up the ying-yang to threaten every neighbor they have. Perhaps ScoMo (PM Scott Morrison) could request Beijing include itself in its nuclear-free zone.

Second, the Chicoms have created a self-fulfilling prophecy.  They have alerted all four of their enemies – Australia, Taiwan, Japan, and South Korea – of the dire necessities of protecting themselves with nuclear deterrence against them.  “If you want peace, prepare for war,” was the advice of Ancient Rome and it’s true as ever today.

It would be easy for the Aussies to convert the Tomahawk-type cruise missiles in their new subs from conventional warheads to a smaller/lighter W80 thermonuclear warhead.  At least technically as Aussie libtards prevent Oz from having nuclear power and would go bananas if Aussie subs were sub-rosa armed this way (making Chicom threats even more asinine).

However, nuclear power is big time in South Korea, and in Taiwan.  Nuclear power in Japan is trying to make a comeback.  The bottom line is:  all three have an abundance of reactor grade plutonium.  With that, it is possible with very tricky physics to use only eight kilos of explosives per one square inch of a reactor-grade plutonium pit to ignite in nanoseconds a thermonuclear explosion up to 10 times the size of Hiroshima.

The range of a Tomahawk-type cruise missile is 1,500 miles.  Beijing is 600 miles from Seoul.  Shanghai is 500 miles from southern Japan, little more than 400 miles from Taipei.  South Korea, Japan, and Taiwan could have a sufficient W80 type warhead-cruise missile nuclear deterrent against China in less than a year – and they may very well do so with Chicom nuclear bullying now intolerable.  Are you listening, ScoMo? 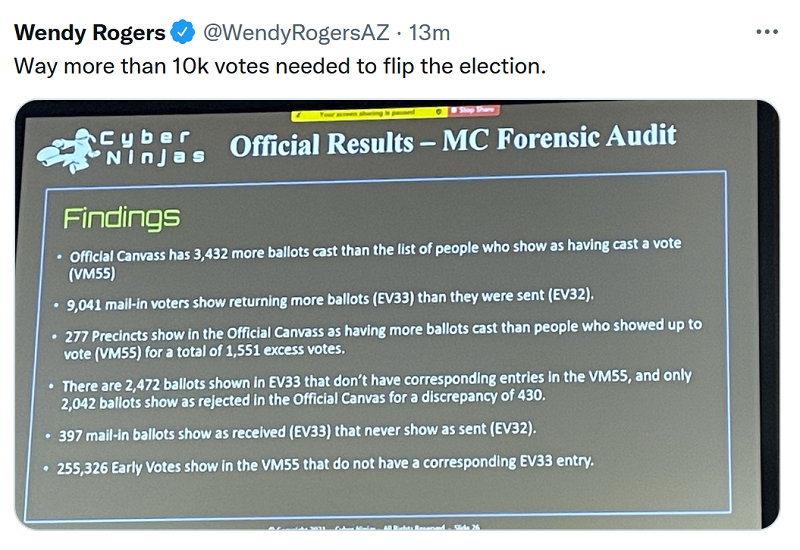 There is now a clear possibility that Arizona Attorney General Mike Brnovich may – may – propose to have Arizona’s November 2020 presidential election results decertified.  Stay tuned.

As we enter a period of real chaos throughout our country, take hope in: Joe Biden’s Presidency Is Hanging By A Thread As Radicals And Moderates Go To War As His Entire Legislative Agenda Sits On The Knife’s Edge Of Total Failure.

And in this report by Glenn Greenwald (9/22): New Proof Emerges of the Biden Family Emails: a Definitive Account of the CIA/Media/BigTech Fraud

“An axis of the CIA, Big Tech and the DNC-allied wing of the corporate media spread an absolute lie in the weeks before the 2020 election. We now have definitive proof.”

While POTUS states the unvarnished truth:  President Trump: “America Is Rapidly Becoming a Cesspool of Humanity Under Biden.”

Yet the real cesspool is not under a bridge in Del Rio, Texas.  It is in the White House, the Dem offices on Capitol Hill, in Langley, in the FBI building, in the New York Times Building on Eighth Avenue Manhattan, in Big Tech infestations of Silicon Valley.

All of this must be swept away as Hercules cleansed the Augean Stables.  May the coming weeks ahead be the start.

As a closing note, Rebel and I will be in Italy with fellow TTPers for the next two weeks.  I am so appreciative that TTPer Mike Ryan will man the HFR helm next Friday, Oct. 1st.  I’ll be back on board the following Friday (10/09).  Thanks, Mike!