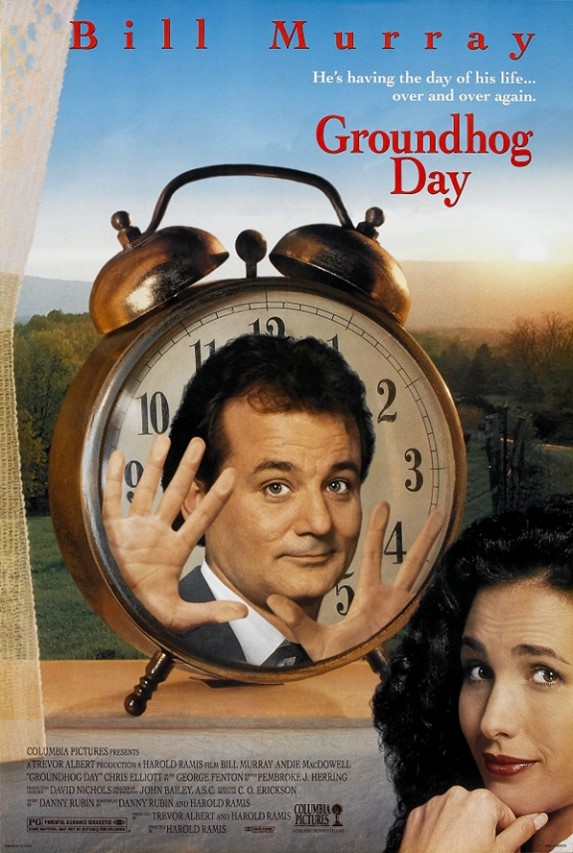 You’ve seen the Bill Murray movie Groundhog Day, right?  Murray is caught in a time warp where he keeps reliving the same day over and over.  For quite a while now, Miko and I have a running joke between us, calling HFR Friday our Groundhog Day as every week we can’t believe how quickly the time has sped by.  It’s Friday again – didn’t I just write the last HFR a day or so ago?

The joke ends now, because time in the upcoming weeks will not be going by fast but interminably slow.  November 3rd is 46 days away, which will seem like 46 weeks, and then every day after that for 2 or 3 months will take forever.

This is a way of dramatizing just how screamingly bad the nightmare that’s coming may be.  Note the “may” and not “will.”  We just might float past this unscathed, carried by a high tide of so many Trump votes it drowns the Dems’ demonic plans. 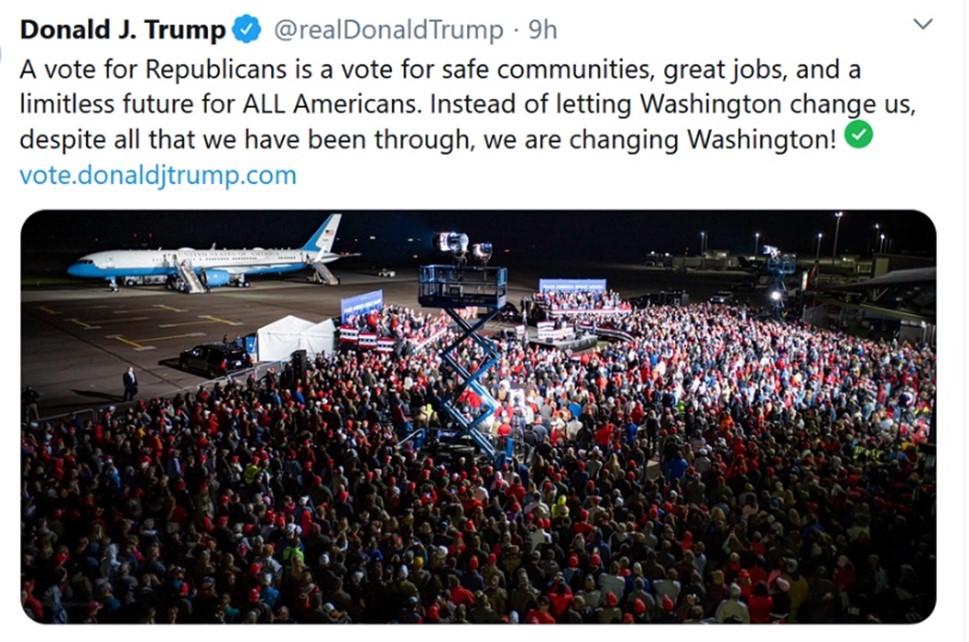 POTUS tweeted this shortly after his rally in Wisconsin last night (9/17).  He is, of course, right.  He’s drawing enormous crowds who passionately agree, while Joe Hiden can’t draw enough supporters to fill up somebody’s living room.

The Trump Campaign’s ground game is so extraordinary that it has 2 million volunteers who have personally knocked on doors reaching over 100 million voters since June.  Number of doors the Hiden campaign has knocked on?  Zero.

But why try to create enthusiasm for your candidate when there isn’t any, get crowds to show up for him who won’t, or go door-knocking when no one’s volunteering to do so?  Why bother, keep your guy in the basement, when all you have to do is cheat your way to an easy win?

On Monday (9/14), Breitbart ran without comment this AP report: Democrats try to streamline mail balloting for their voters. Breitbart articles often get thousands of comments.  As of this afternoon, this got 2.  No one is noticing  that this “streamlining” is taking cheat-by-mail to a whole new level of automated mass-produced convenience.

Ever use Docusign or scan in your signature to e-sign something?  Your digital signature is easily hacked or acquired, especially by Dems who talk you into giving it to them to “help” you with your voter registration form – which is supposed to match the one you provide on the outside of the mail-in ballot envelope. AP:

The [Democrat’s IWillVote.com] site even allows voters in certain states to provide signatures on their online ballot applications. These signatures will often go on file with elections offices to be checked against voters’ signatures on the actual absentee ballot to verify their identity.

Now look at the end of article about “ballot chase” –

“The ballot chase is why campaigns usually want their supporters voting by mail — because they can confirm that those backers have cast ballots and dedicate resources to nagging those who haven’t voted to turn out on Election Day.”

By “nagging” you with calls, Dems can tell if you’ve voted or not.  For all registered voters who haven’t, they simply print out a ballot with your digital signature and vote Dem for you.  Suddenly, tons of votes arrive at your precinct just under the deadline with a fake postmark date stamp, and Dems win with a 98% turnout.

Dems are playing with a deck of 52 aces on cheating tricks – this is only one of them.  They can afford to run a senile-candidate-in-the-basement campaign because they know they can cheat their way to the White House.

The next must-read is from Breitbart yesterday (9/17): Soros-Backed Groups Preparing for Post-Election Chaos.  In any state where Trump’s margin of victory is remotely close, Soros rent-a-mobs will violently riot over Trump “election theft.”  Read the whole thing – please.

Now we’ve had presidential elections stolen before – like Kennedy v. Nixon in 1960 – or almost stolen like Gore v. Bush in 2000.  But the difference between the candidates was not humungous.  This time it is.  This time, as former CIA agent Sam Faddis notes, it’s like 1959 Cuba, 1917 Russia, or 1933 Germany.

So the third must-read is Sam’s The Left’s Communist Revolution Doesn’t Care About Elections.  The groups Soros and his ilk like the Tides Foundation are backing – from BLM, Antifa, and the Revolutionary Communist Party of America – intend, via their control a Dem Party in the White House, to do to America what Lenin did to Russia, Hitler did to Germany, and Castro did to Cuba.

And you don’t need a charismatic psychopath to lead it.  A more uncharismatic guy than Nicolas Maduro you can’t find, and a more ruined and starving country you can’t find more than his Venezuela.  Yet he’s still there.  You just need people trained to be sheep – which the Dems are doing to millions with their “pandemic” excuse, as described by Claire Chretien in TTP yesterday (9/17).

What to do?  Soros fascisti preparing for chaos declare they will “fight like hell.”  Then so must we.  We must take the fight to them and fight without rules, for they don’t have any.  There are no rules in a street fight, a gun fight – or in a knife fight.  Remember?

That’s the way to do it.

One very important reality in all threats of post-election chaos by the Commie-Nazi Left is that until January 20 – for 78 days after November 3 – Donald Trump is still President of the entire United States and Commander-in-Chief of the entire US Military.

Only the Army is restrained by the Posse Comitatus Act forbidden to act as law enforcement within the US – POTUS is fully free to command the Marines to put down any insurrection or civic violence.  His doing so vigorously could be quite persuasive in a SCOTUS determination of the Electoral Vote on December 14.

As we discussed last week, it really doesn’t matter how much the wacko blue states like California, New York, New Jersey, or Illinois are burned down by the crazies.  Their Dem EVs (electoral votes) are a given.  POTUS will carry most every red state including Florida going away, so any fascisti nonsense in them will be easily squashed.

The whole fiasco will turn on the EV Big Three of Michigan, Pennsylvania, and Wisconsin – all Dem-controlled with a decidedly pro-Trump electorate.  Thus the cheating will have to be massive and thus massively obvious – with resultant violent chaos to match.

POTUS’ job will be to shut the chaos down decisively yet not too harshly such that he wins public approval.  Thread-the-needle finesse.  My bet continues to be on him.

It has to be or it’s lock and load for real for all of us.  Again, pray – pray we never get to that point.  Yet don’t deny we may have no choice but to.

One state the Dems can kiss goodbye is Ohio.  Up to 20 thousand vehicles in a Trump parade in Cincinnati yesterday: 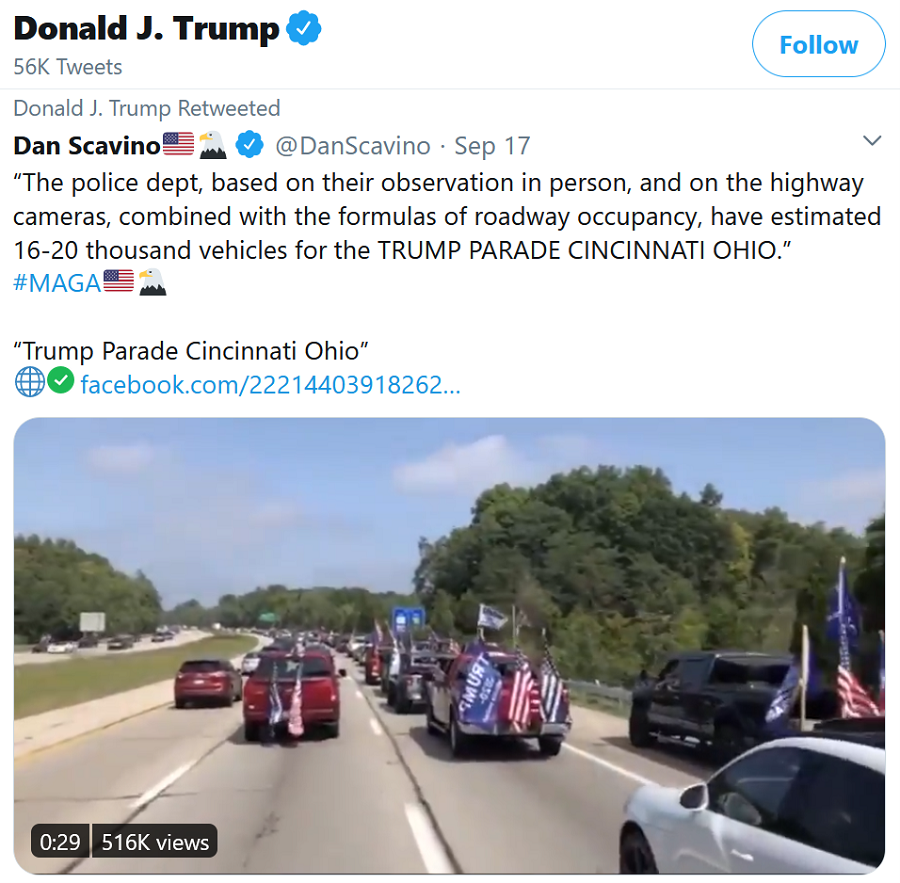 Now contrast two parades on Sunday (9/13), one for POTUS in Miami, the other for Despacito Joe in Vegas:

Despacito?  On Tuesday (9/15), Joe held his first campaign event in Florida.  Introducing him was Luis Fonsi, a popular Hispanic singer with a hit song “Despacito.”  Here’s what happened.  Note the wild applause.  Sounds like maybe four people are clapping.  Note the silence at the end.

Why is this being laughed at and panned as unbearably “cringeworthy” by those who were there?  “Despacito” means slowly in Spanish.  Slow Joe Biden the Pander Master.

At a meeting with a small group of Florida veterans later that same day, he got completely confused:

At the CNN Townhall event last night (9/17), a lady farmer asked Joe how he would decrease the regulatory burden on America’s farmers.  He answered:

He’s been laughed at as a joke for so long Johnny Carson made fun of him a third of a century ago, in 1987:

All the media is allowed to do is ask Joe Despocito kiddie softball questions.  This is doing him grave harm, say many Dems, as he will be totally unprepared for getting stomped into the floor by El Donaldo at their first debate on Sept. 29.  Capitol Hill rumor has it that Joe will suddenly contract the China Virus soon incapacitating him from debating – but will miraculously and heroically defeat it just before Election Day.

Here’s a sample of six questions a TTPer sent us that POTUS could ask Joe Basement during the debate.  Can you imagine how much fun it would be to see him try to answer any?

1 Why did members of your family keep getting lucrative business opportunities overseas while you were vice president?

2 How did your brother, Frank, secure $45,000,000 in taxpayer loans from the Obama administration for his Caribbean projects?

3 How did a newly-minted firm employing your other brother, James, receive a $1.5 billion contract to build homes in Iraq despite having no experience in construction or international development?

4 Why did your son Hunter accompany you on your official trip to Beijing in December 2013? What did he do on that trip? Who did he meet with? What should the American public make of the fact that just 10 days after this trip, your son’s boutique private equity firm secured a $1 billion investment deal from the state-owned Bank of China (later expanded to $1.5 billion) despite having no prior experience in China, and with this deal, the Chinese government granted your son’s firm a first-of-its-kind arrangement to operate in the recently formed Shanghai Free-Trade Zone—a perk not granted to any of the large established financial institutions?

5 Should the American public be concerned that your son’s private equity firm partnered with a Chinese government-owned aerospace and defense conglomerate to facilitate the purchase of an American company that produced strategically sensitive dual-use military technology that the Chinese government wanted?

6 Does your “Build Back Better” proposal contain any provisions to ensure that American taxpayer-funded technology is not bought off by Chinese state-backed enterprises working with private equity firms like your son’s?

Feel free to add what debate questions you’d like to see POTUS demolish Joe Hiden with – we’ll put them in next week’s HFR.

Meanwhile – are you ready for some football??!!  Not the Hate America NFL Kneelers… 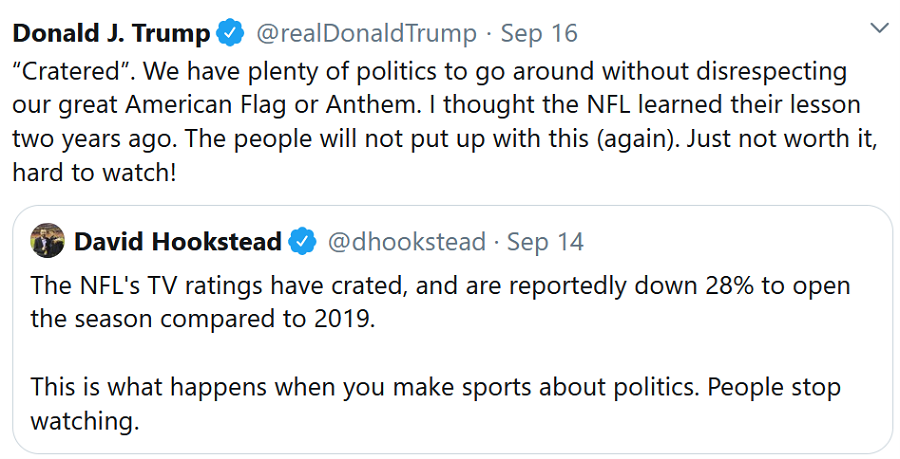 But the Big Ten thanks to Trump!

This wasn’t just POTUS making a call to Big Ten Commissioner Kevin Warren on Sept. 1st.  It was hundreds of calls by Trump aides to Big Ten coaches, athletic directors and other decision makers to get the agreement to closure.  This is a huge deal to millions of regular people who vote in Big Ten states.  Very good for the people, schools and players in these states, very smart politics by POTUS. A win-win for all except Dems.

At the end of the week, the question remains:  will we have an American election or a Stalinist election where “it’s not who votes that count but who counts the votes.”

There’s no doubt that the substantial majority of voters in Michigan, Wisconsin, Pennsylvania and other battleground states will choose their President – while the Democrat vote-counters will manufacture a massive fraudulent vote against him.

POTUS should not wait for SCOTUS to put an end to the post-election chaos and violence.  He needs to request a SCOTUS injunction forbidding Dem unconstitutional cheat-by-mail fraud.  Will he?  Or will he put his faith in his growing popularity?  Today from Rasmussen: 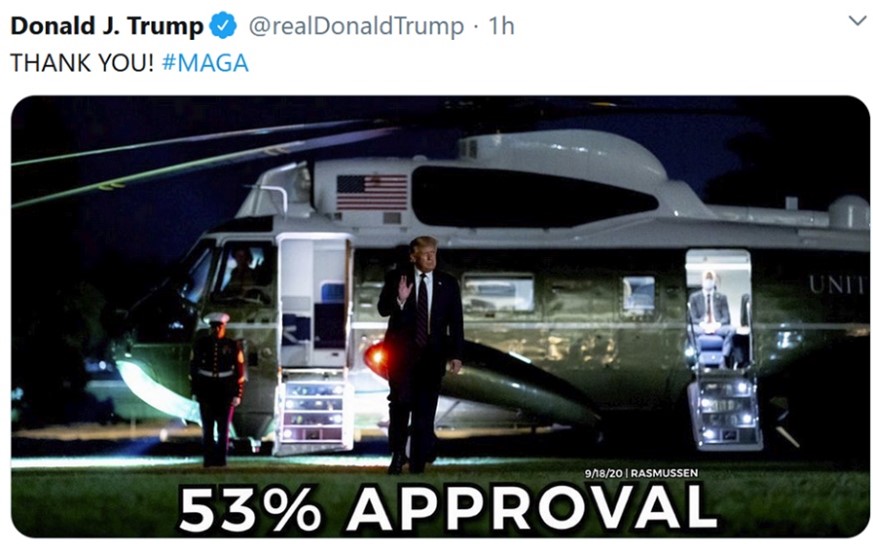 POTUS bets on Rasmussen.  The Dems bet on Stalin.  Which do you think is the better bet?