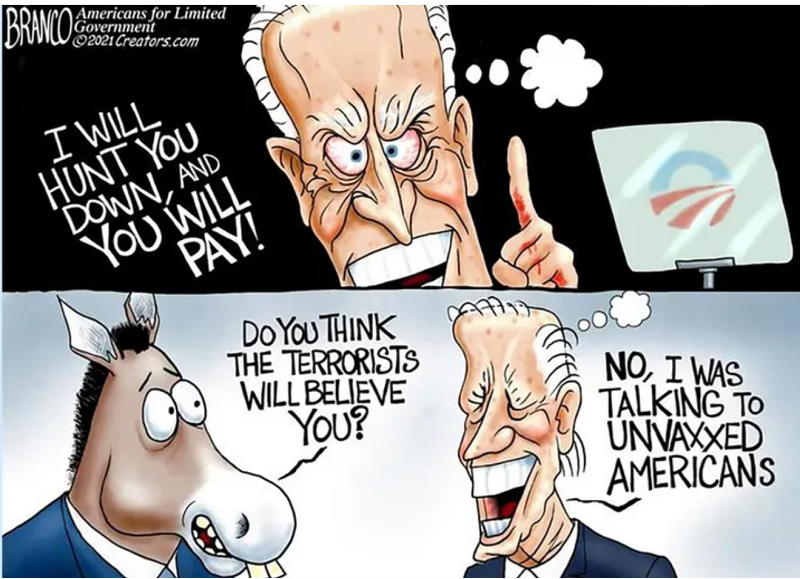 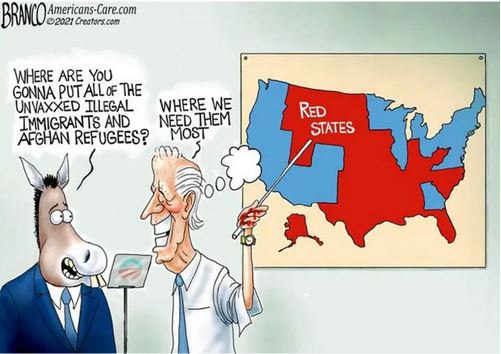 It’s critical to understand the Dem agenda here.  They need a plague.  A plague providing a rationale to suspend the constitution and rule by emergency decree.  A plague that diverts voter attention away from their multiple disastrous failures. A plague with a scapegoat to blame it on, to divide Americans against each other.

Why else would Xiden declare war upon the unvaxxed?  Certainly not to protect the already vaxxed.  As the folks at Gateway put it: If You Are Vaccinated and You Fear the Un-Vaccinated, You Might Be a Moron.

That his maniacal denunciations of the unvaxxed exemplify his hollow soul by refusing to apply his vax mandate to the hundreds of thousands of illegal aliens he has allowed to pour across his open border.  That includes the 50,000 Afghans he just imported.

In his fascist “Fighting the Covid-19 Pandemic speech of Sept 9 he declared:  “This is a pandemic of the unvaccinated… The unvaccinated overcrowd our hospitals, are overrunning the emergency rooms and intensive care units, leaving no room for someone with a heart attack, or cancer.”

Obviously if this were true, his mandate would include illegals and his Afghans, yet he specifically excludes them.  Ergo, his purpose is political, not medical.

Which is, to rule by emergency decree, thus allowing the theft of 2022 elections just as in 2020.  To rule by divide and conquer, creating a cold civil war between the vaxxed and unvaxxed.

Xiden thinks the enemy of this war will be Trump-supporters.  But what if we turn the tables on him by making this a war against unvaxxed illegals, and start running them out of our country?  After all, that would be in support of his goal of ending “the pandemic of the unvaccinated,” right?

Now for a story about “the vaccine” that will infuriate you.  First, understand that the FDA allowed the mRNA vaccines developed by Pfizer, Moderna et al before they were approved via the normal human clinical trials process through granting them an FDA Emergency Use Authorization (EUA).

On page 3 (see link) under the heading, Criteria and Considerations for the Issuance of an EUA for a Covid-19 Vaccine, you discover that FDA rules prohibit an EUA if: “There is no adequate, approved, and available alternative to the product for diagnosing, preventing, or treating the disease or condition.”

Please absorb this deeply.  This explains the FDA’s demonization of HCQ and subsequently Ivermectin.  If these cheap and safe drugs used by hundreds of millions of humans all over the world for decades can prevent or treat covid, then no mRNA vaccines can get a EUA.

Realize that close to half – half! – of the FDA’s budget is funded by Big Pharma “user fees,” cf. this University of Connecticut School of Pharmacy report last May:  Why is the FDA Funded in Part by the Companies It Regulates?

Big Pharma saw all the billions they could make rushing mRNA vaccines with their deadly spike proteins into use with EUAs – but not if people could use a few pennies of HCQ with zinc and D3 for five days or so and not get sick and die from a flu bug.  So they bribed the FDA and Big Media to condemn, trash, and demonize HCQ.

Thanks to them, millions of people got deathly sick and died, the world economy went into lockdown, the Dems allowed to steal the presidency and got to manufacture a plague they will never let go of.  How’s that for infuriation?

Now the DemFascist-Big Pharma Propaganda Machine has another target for demonization.  Please watch this 4-minute video produced by the World Bank about a miracle drug that has cured over 100 million people in Africa from the horrible disease of River Blindness:

Inspiring, yes?  But did you notice something strange – that the miracle drug was never identified, never named?  Why not? Perhaps because the drug is Ivermectin.

For over thirty years, Merck has distributed billions of doses of ivermectin – under its brand name of Mectizan – to prevent and cure Africans of river blindness and another horrible disease, elephantiasis: Over 30 Years: The Mectizan® Donation Program.

The story is on Merck’s website, and the company has every right to be justly proud of what they have achieved with ivermectin.  So it was a shocking mystery when, last February, Merck issued a lying-through-its-teeth bitter condemnation of their own drug for covid: Merck Statement on Ivermectin use During the COVID-19 Pandemic.

Merck’s claim of “No scientific basis for a potential therapeutic effect against COVID-19” was not retracted when the American Journal of Therapeutics issued in April: Review of the Emerging Evidence Demonstrating the Efficacy of Ivermectin in the Prophylaxis and Treatment of COVID-19:

“Conclusions: Meta-analyses based on 18 randomized controlled treatment trials of ivermectin in COVID-19 have found large, statistically significant reductions in mortality, time to clinical recovery, and time to viral clearance. Furthermore, results from numerous controlled prophylaxis trials report significantly reduced risks of contracting COVID-19 with the regular use of ivermectin. Finally, the many examples of ivermectin distribution campaigns leading to rapid population-wide decreases in morbidity and mortality indicate that an oral agent effective in all phases of COVID-19 has been identified.”

The mystery was solved in June: Merck Announces $1.2 Billion Supply Agreement with U.S. Government for Molnupiravir, an Investigational Oral Antiviral Candidate for Treatment of Mild to Moderate COVID-19.  Note this will be done under an EUA, which is why Merch had to trash its own drug to get the billion dollar bribe.

You may need three fingers of Famous Grouse to calm you down now, but…

We’re not done yet. 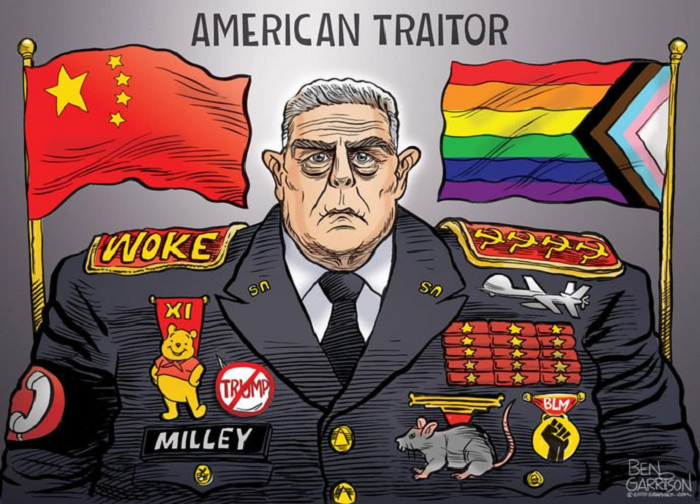 Yes, he’s a traitor and should be executed by firing squad for treason.  Trouble is, it’s worse than that.

The Chairman of the Joint Chiefs of Staff is a psychopath.  He is an ultimate example of Trump Derangement Syndrome.  He did not invent the crazy idea that POTUS was thinking of nuking China.  His TDS deluded him into “knowing” this with no evidence whatever and a lot of contrary evidence besides.

Folks, this is no different from the wacko who kills someone because he believes aliens on Mars are beaming commands into his brain to do so.  Milley’s treason – warning the Chicoms that the President of the United States might be about to launch a nuclear attack on them – was a real psychiatric delusion of a psychopath.

And yes, it’s even worse:  his bosses, SecDef Pink Lloyd and the OOI (Oval Office Impostor) support him – no way will they fire him.  Because he’s a psycho who can be deluded into thinking that Trump-supporters are America’s Taliban.

Why?  What’s the Dem agenda here?  Here we go so get a firm grip on your glass of Scotch. But quite another to rope in the CJCOS: 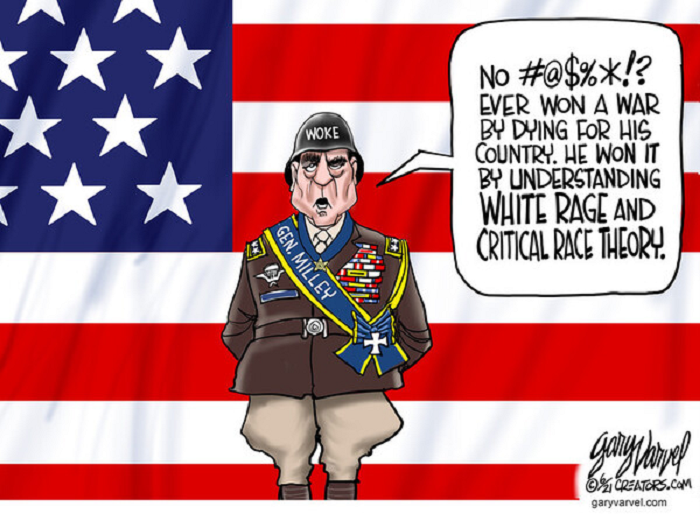 Milley is psychiatrically deluded enough to actually believe this, making him perfect as a front man to achieve the ultimate Democrat-Marxist goal: to destroy the US military’s purpose of defending America from its foreign enemies, converting it into an armed force for internal suppression.

The military’s purpose for any dictatorship is not external defense, but to stamp out with guns and bullets any resistance by the people under its rule.  The government of Communist China does not have the world’s largest army of over 2 million active duty soldiers to defend itself from invasion from Taiwan or South Korea, but to crush the skulls of any Chinese – their own people – who might decide they want freedom instead of fascism.

And those soldiers of the People’s Liberation Army of China are programmed to do just that.  Which is precisely the goal of the Democrat Party for America’s military today.

That explicitly explains the Democrats’ fanatical opposition to the 2nd Amendment. 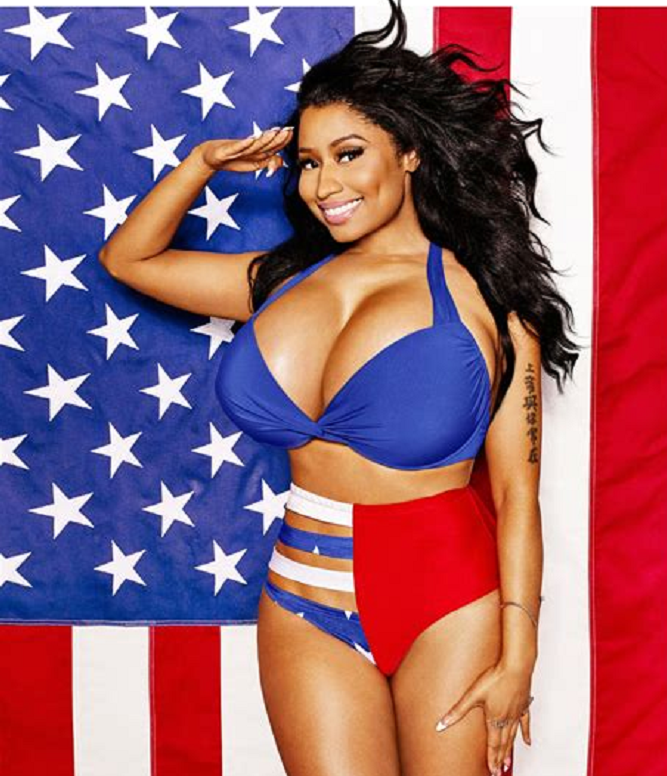 Born in Trinidad and raised in Queens, she’s an American who refuses to submit to Dem vaccine worship.  No use for Dem cancel culture to bully her.  Nicki’s response:  America’s cancel culture is like Communist China.  That’s what she told her 160 million followers on Instagram.  On Wednesday (9/15), a group of her followers demonstrated at the CDC HQ in Atlanta, as she has called Fauci a liar:

And it’s gratifying to see the perpetrator of the entire Chicom Flu Bug Pandemic is in trouble.  To start, have a hard look at this graph: 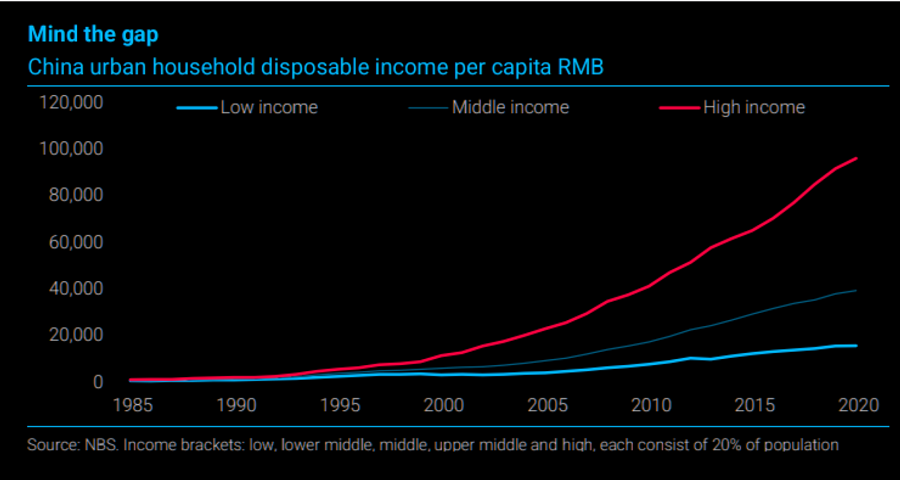 It’s hard to see but there’s a “lower middle” blue line barely above the bottom turquoise “low income” line, and another barely below the “middle income.”  As each line is 20% of the Chinese people, that means that the per capita income of 40% of China, some 560 million, has hardly grown since 1985, and not by much for another 560m.  It’s only for the top 280m has wealth arrived – not so for the other 1,200 billion.

So no wonder AT reports (9/13): China Is in Deep Trouble and Bound to Get Worse.

No wonder the Chicoms are saber-rattling at Taiwan to distract the Chinese from their growing penury.

Lastly from the Land of Oz, Sky News host Rita Panahi says she will “personally write a cheque” for anyone who can decipher what Ice Cream Joe is trying to convey in his latest gaffe.  Bet you can’t:

Time to bottom line.  The DemFascists can perform their deflection/scapegoat scam all they want, but here’s the reality as Skye showed yesterday: From throngs of Inner City rapper fans of Nicki Minaj to Governors like Ron DeSantis who vow to “Fight Like Hell to Stop Joe Biden”, they will ensure the Dem Plague agenda will fail.

Further, 18 states have passed election reform laws so far this year.  It’s only a start compared to what’s needed, but it’s a movement that’s on its way down the road.

What’s more, Dems have no escape from the monster devouring them.  ZeroHedge today (9/17): Americans Panic Over Soaring Inflation, Buying Conditions Hit The Worst On Record.  Can’t blame the unvaxxed on the price of eggs at the market, natgas to heat your home, gas at the pump.  It’s all on you, Joe, you and your evil party are screwed.

Let’s close with something just plain cool.  Last Saturday night (9/11) in Tallahassee, heavily underdog Jacksonville State Gamecocks were down 14 to 17 against powerhouse Florida State Seminoles with 6 seconds to go in the game on their own 40 yard line. QB Zerrick Cooper unloads a Hail Mary toward wide receiver Damond Philyaw-Johnson. Watch what happens.  Enjoy.