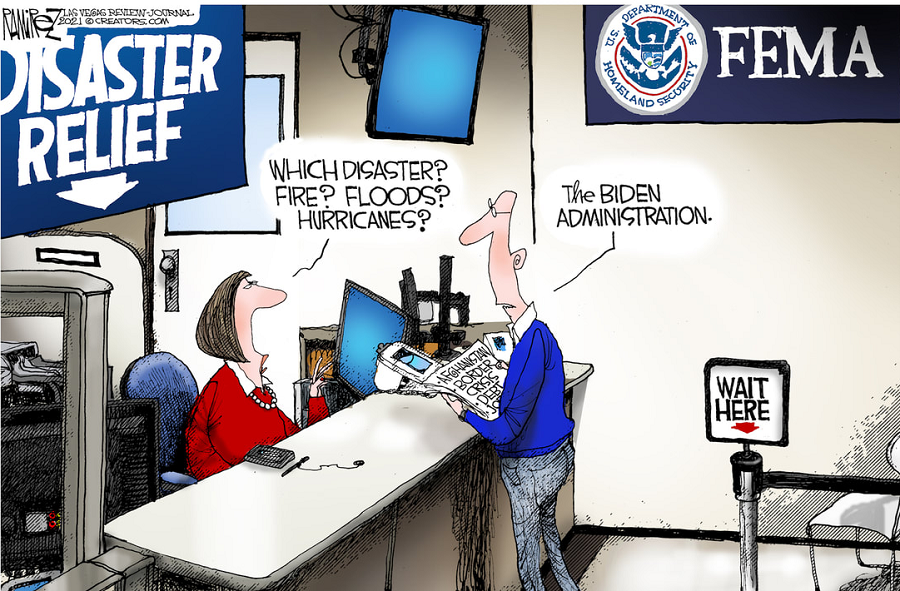 More accurately, the Biden Regime.  Since 12 Noon EDT last January 20, there has not been a legitimate presidential administration in Washington, and every day since has proven its illegitimacy.

Roger is mystified how the most beautiful piece of real estate arguably in the entire globe turned into rubbish heap.  What really completely mystifies him is how could California voters want to keep living in their garbage dump when thye have a chance to get rid of their garbage dump governor?

The Recall Election is next Tuesday (9/14) and works like this: If and only if a simple majority of voters vote “Yes Remove”, then Gavin Newsom is replaced by the Replacement Candidate with the most (simple plurality) votes.  If a simple majority vote “No Do Not Remove”, Newsom stays governor.

Each has Larry Elder way out in front of all the other Replacements, but that matters not a whit if these numbers are close to being right.  Bottom line:  Too many people in California want to keep turning the once-Golden State into – in POTUS’ words – “a Third World s-hole.”

Why?  Are they actually room-temp IQ stupid?  Hate themselves? Suicidal? Hate their children so much they want to destroy their future?  All of this and more?

Whatever the reasons, the odds seem high that Californians will throw their chance next Tuesday into the garbage dump their state has become and will thus remain so.

Now the question becomes – will Americans do the same to their country or not?

Another way to ask the same question:  When do we reach Peak Enough?  The tipping point, the trip wire, the last straw?  How much more fascist, illegal, unconstitutional ruination of our country can Americans stand before they pull the trigger on it all?

It won’t happen all at once all across the country – but you can feel it coming, can’t you?  For the last two weeks it’s been the Regime’s treason over Afghanistan – flat-out unvarnished treason.  On Fox News Sunday (9/05), Congressman Brain Mast (R-FL) said Biden must be impeached for treason:

“Impeachment is absolutely something that should be considered. I would say no less than 10,000 counts of reckless endangerment, all of the American lives over there… The Taliban is the sworn enemy of the United States of America. We are still in the midst of the war on terror. I would absolutely consider the manipulation of intelligence, giving aid and comfort to the enemy. All three of those things are part of what meets the constitutional definition of treason.”

Last week’s HFR cited people telling Biden to “Burn in Hell” for his Afghan treason.  This week (9/08), the Daily Mail gleefully reported: ‘It Would Be Such An Honor To Meet The Real President’: Gold Star Mother Of Marine Killed In Kabul Airport Blast Invites Trump To Her Son’s Funeral After Saying Biden ‘Has Blood On His Hands’.

While a hacker with a sense of humor hacked into VDOT (VA Dept. of Transportation) to put up this Amber Alert on 395 coming into DC rush hour on a foggy Tuesday: 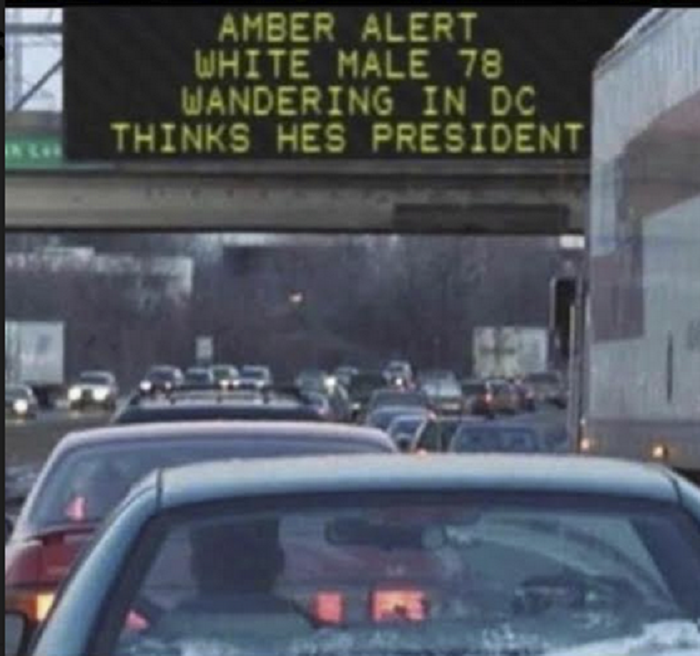 Anger is fast outweighing humor, however.  That same day (9/07), when he was in New Jersey inspecting flood damage, a crowd gathered with people shouting at Biden “you’re despicable” and “pedophile!”.

Yesterday (9/09), that despicable pedophile delivered what TTPer Patricia McCarthy condemned as “the most insulting, contemptuous, and divisive speech by a president in U.S. history.”

Several hours later yesterday evening, 65,000 football fans filling the Raymond James Stadium to capacity in Tampa to watch their Super Bowl champion Bucs beat the Cowboys, demonstrated what they thought of President Dirtbag’s mandates.  Not a mask in sight: 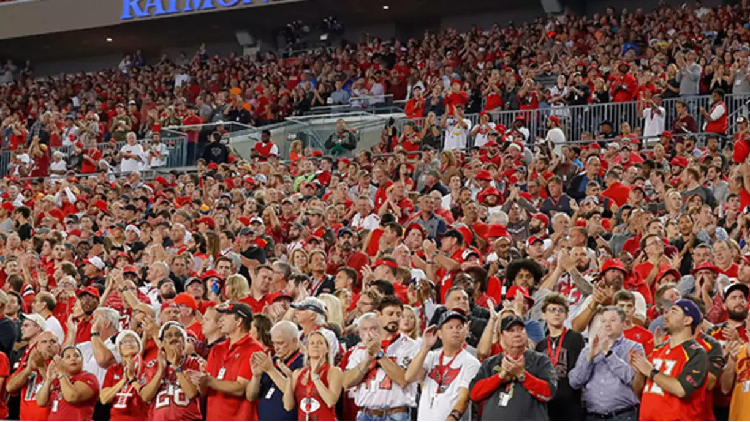 Note the public James’ covid protocols are “optional” outdoors.  Enjoy the first Brady touchdown of the season.  He is the G.O.A.T.

McCarthy in her must-read A Blight on America, A Blight on the Civilized World, asks an extraordinary question that many of us have asked ourselves:

“Is Biden importing a replacement population by design while trying to kill off those of us who are native-born Americans with vaccines that not only do not work, but for many have dire side-effects such as death, injury, and illness.  Could this all be part of the globalists’ Great Reset?  Probably.  It all feels like part of someone’s grand plan.”

What gives so much immediate credence to this is: Biden’s Vaccination Mandate Doesn’t Include Illegal Immigrants.  Plus the 50,000 and counting unvetted unvaxxed Afghans that Dirtbag just dumped into our midst.

Don’t let this upset you.  Realize that this senile buffoon hasn’t the brains to realize his puppet masters have let their hubris destroy both him and them.  You might want to read that again to fully absorb it.

That is, Ice Cream Joe’s ludicrously fascist universal vax mandate except for illegals and Afghans could be the Peak Enough trigger.

The Dems desperately need a scapegoat to blame for all their ruination of America, and they’ve picked the 80-90+ million “unvaccinated” – which they think are mostly white uneducated Trump-supporting conservatives.  Guess again, woketards.

Guess what is the most vaccine-resistant group in America, as determined by researchers at prestigious Carnegie-Mellon University?  Yes, the most-educated of all, Ph.Ds, despite ethnicity or political affiliation. 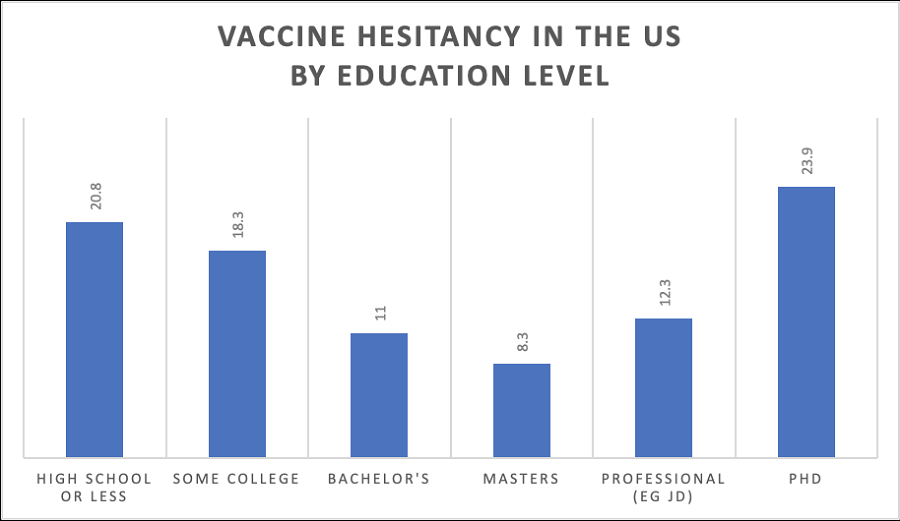 Add to America’s Ph.Ds and millions of football fans:

*Private Employers Prepare Lawsuits Against Biden’s Sweeping Vaccine Mandate.  A massive class action suit by employers in multiple states resulting in conflicting lower court decisions will quickly be at SCOTUS’ doorstep.  At least 5 Justices will realize the viability of the Constitution is at stake.  There may be precedents (such as Jacobson v Massachusetts 1909) that permit an emergency override of the Constitution – but not an “emergency” that lasts interminably or else the Constitution ceases to exist.

All of whom can call out their state’s National Guard to prevent Xiden from “getting them out of the way.”  Cheap threat, Joe.  Everyone knows it’s empty.

*In the Can’t Make This Up Dept., VP Harris – yesterday, the very day Xiden announced his fascist mandates – actually explained to an audience what women’s health rights are about: “When people are able to make choices without government interference, for themselves in terms of their wellbeing… we are a stronger society.”

She was condemning the pro-life Texas Heartbeat Law, brainlessly unaware of the excruciating irony.  She says this at 1:34 in the clip:

On top of all of this comes the news today (9/10): Producer Prices Soar a Record 8.3% as Bidenflation Runs Hotter Than Expected.  Must be the fault of the Unvaccinated.  Gotta be a scapegoat in here somewhere.

One unbelievable – and unbelievably fascist – part of the Xiden Vax Mandate is that even those who have had covid and thus have natural immunity must be vaxxed.  This is depraved and ludicrously ignorant.

Natural immunity is far more protective that these mRNA vaccines which produce spike proteins against one covid virus.  RNA viruses are very unstable and mutate fast – there are some 40 to 50 spike protein mutations in the Delta covid variant for example.  The Pfizer-Moderna et al vaccine “boosters” for Delta are exactly the same, providing no protection from the mutations at all – they are a total scam.

But natural immunity gives you protection against dozens of spike protein mutations in the same way if you’ve had measles as a kid you won’t get it again even if you’re exposed to a measles variant years later.

Look at it this way – we need to get a different flu shot because flu viruses have 8 different RNA strands that can recombine in a different version every year.  But the covid has only 1 strand, and once you get natural immunity to it, you stay immune.  That’s why the most effective strategy is let natural immunity take its course with no masks, lockdowns, universal vaxxes, and let it die out – just like Sweden and Denmark have figured out.

But no, we’re saddled with mRNA vaccines with a genetic code that causes our bodies to manufacture artificial spike proteins that are harder to fall apart, and propagate into every organ causing heart inflammation, blood clotting, brain strokes and other havoc.

(The new Novavax doesn’t have any mRNA at all, just a synthetic subsection of a spike protein that get gets flushed out once it creates the required antibodies – it’s incapable of making more spike proteins at all.)

Bottom line is the whole Vaccine Mandate Scam/War on the Unvaxxed is to turn us into obedient sheep distracted from the incredible loss of freedom and ruination of America.  Here is the Xiden/Dem goal: 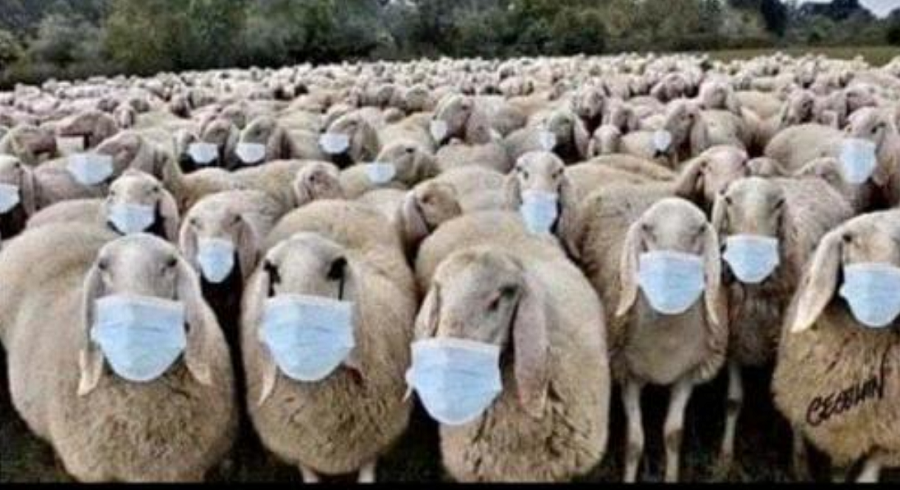 But we aren’t going to let them get away with it, are we?

What is happening right now is no disaster – it is an opportunity handed by Providence to us on a golden platter, an opportunity for mass rebellion, mass peaceful civil disobedience.  This is what GOP Senatorial candidate in Ohio, J. D. Vance, is calling for:

“Do not comply with the mandates. Do not pay the government fines. Don’t allow yourself to be bullied & controlled. Only mass civil disobedience will save us from Joe Biden’s naked authoritarianism.”  https://jdvance.com/

The first step in doing so – if you haven’t already – is to get out of a blue state now if you’re still in one, and get into one of those 17 red states with GOP Govs.  OK, there are exceptions, like Skye’s rural Nevada, but they are very rare.  Then join your local Freedom to Disobey group.  Or form one of your own.

Or, as Brandon Morse at RedState says today (9/10), Do Your Duty as an American and Do Not Comply.  Simple as that.

Believe me – fighting for your, your family’s, and America’s freedom will be worth it.

Tomorrow, September 11, is a sacred day of sorrow for all America.  Let it be, on this 20th anniversary, a recommitment to the principles of liberty our country was founded on, and to the defeat of the barbarians who hate our country for those very principles. All of us are today called upon to be worthy of being an American.

We close with this 9/11 message from our real President: