Now that’s the way you do it!    Charge, smash down their “Antifa Shield Wall” – can you imagine how the Romans would laugh at that term? – baton the crap out of the crybullies and watch them run like rabbits.

This was in Portland on Monday night (8/24), should have been done three months ago at the very start.  Yet better late than never.

Welcome to The Tide Is Turning HFR.

CNN became an object of ridicule on social media for the chyron “Fiery But Mostly Peaceful Protests” as reporter Oscar Jimenez claims with buildings in Kenosha, Wisconsin burning behind him on Wednesday (8/26). 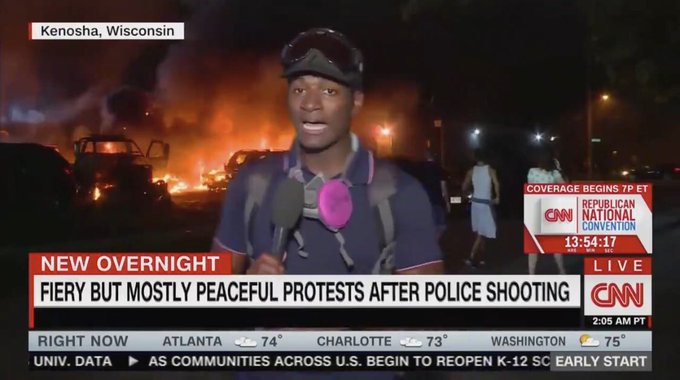 As David Marcus at The Federalist explains yesterday (8/27): Democrats Are Freaking Out and They Should Be.

“The New York Times ran an article Wednesday (8/26) about how voters in Wisconsin are responding to the riots by switching their support to Donald Trump. This is a very strange thing to see in the progressive Gray Lady. Anybody who follows the paper and its politics closely knows exactly what is happening here. It is a desperate plea to Democrats to change their tune on the violence sweeping across American cities.”

But it’s too late.  Dems are suddenly all for “peace” and not violence because they’re collapsing in the polls and everyone knows it.  Biden got no bounce whatever after the Dem convention – which is unprecedented, while Trump is soaring: Trump pops to 52%: ‘Best job approval rating on record,’ up with blacks, even Democrats.

Another reason is at last good guys are fighting back for real.  A 17 year-old kid did on Wednesday in Kenosha, and although he’s the devil incarnate to the bad guys for killing two of them and almost blowing the arm off a third, the truth is emerging.  Here’s what happened:

The best reporter on all this mayhem is Andy Ngo.  He ID’s the three criminals Kyle shot: 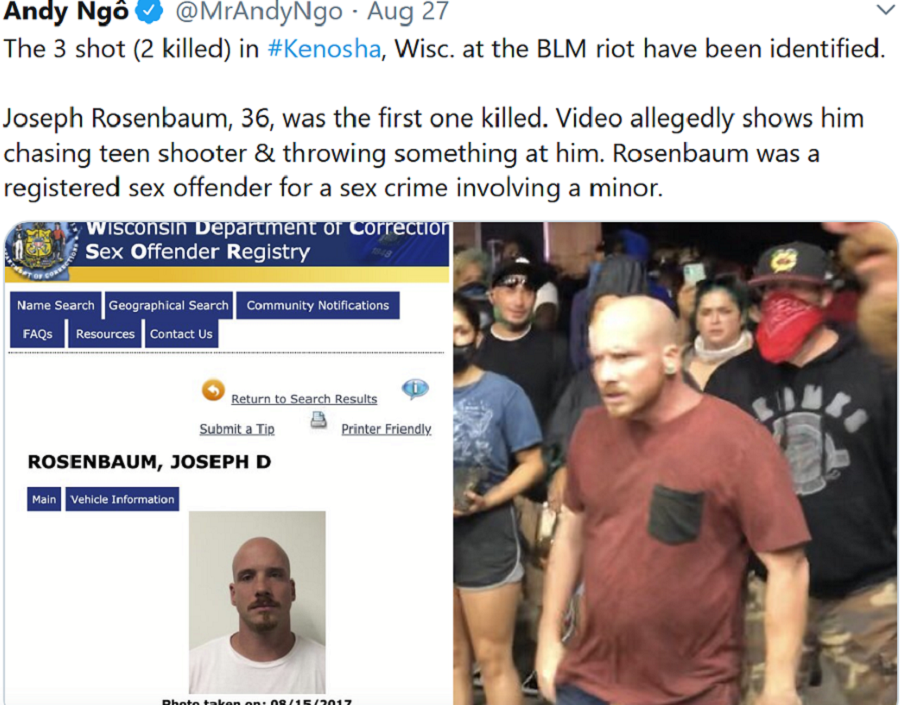 “A minor” means under 13 – he’s a convicted pedophile 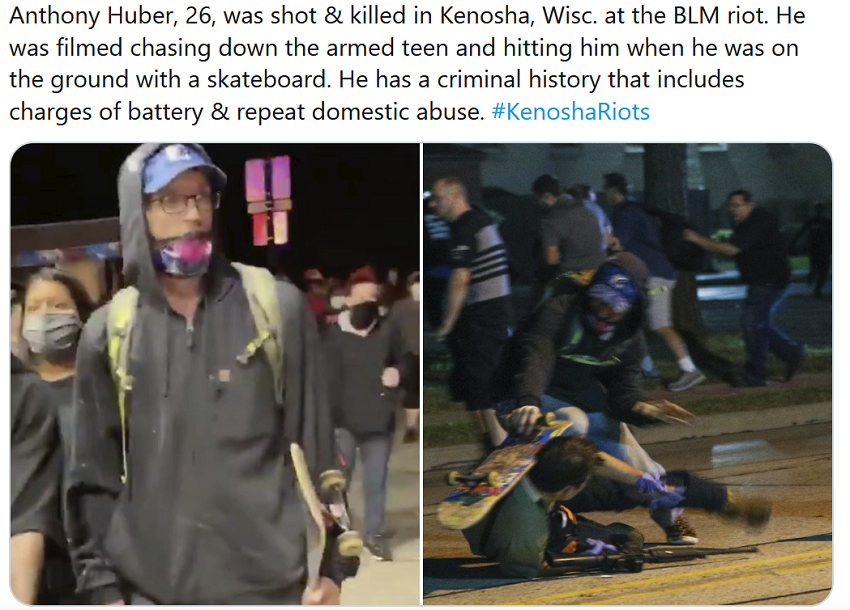 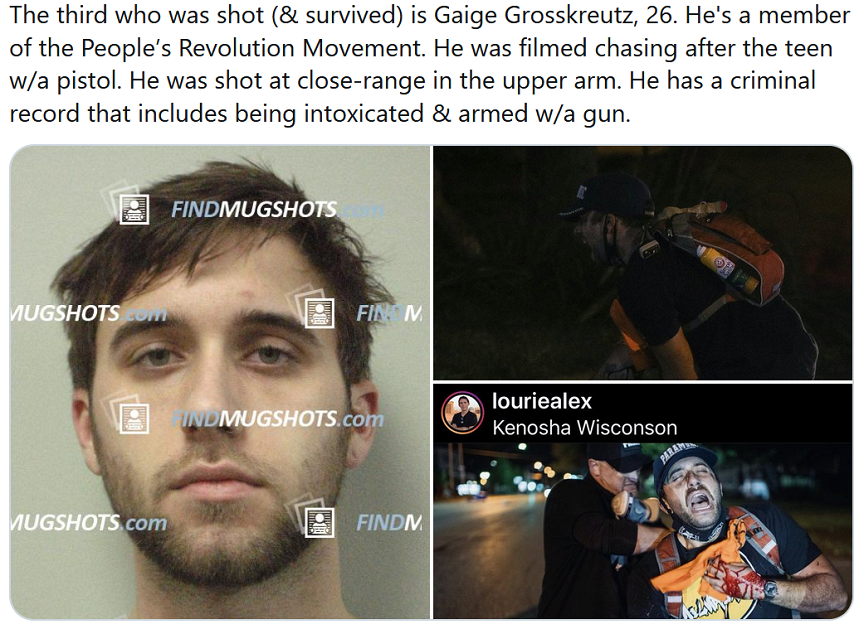 Grosskreutz had a 9mm Glock which he pulled on Kyle, who shot him before he pulled the trigger.  He is quoted as saying he only “regrets hesitating to shoot and kill the kid.”  Here’s a a 3-second clip in which you can see the gun in his hand.

These three are dirt bag criminals who got precisely what they deserved.  Really good news is that the lawyer who so successfully defended Nick Sandmann, Lin Wood, will be Kyle’s defense attorney! 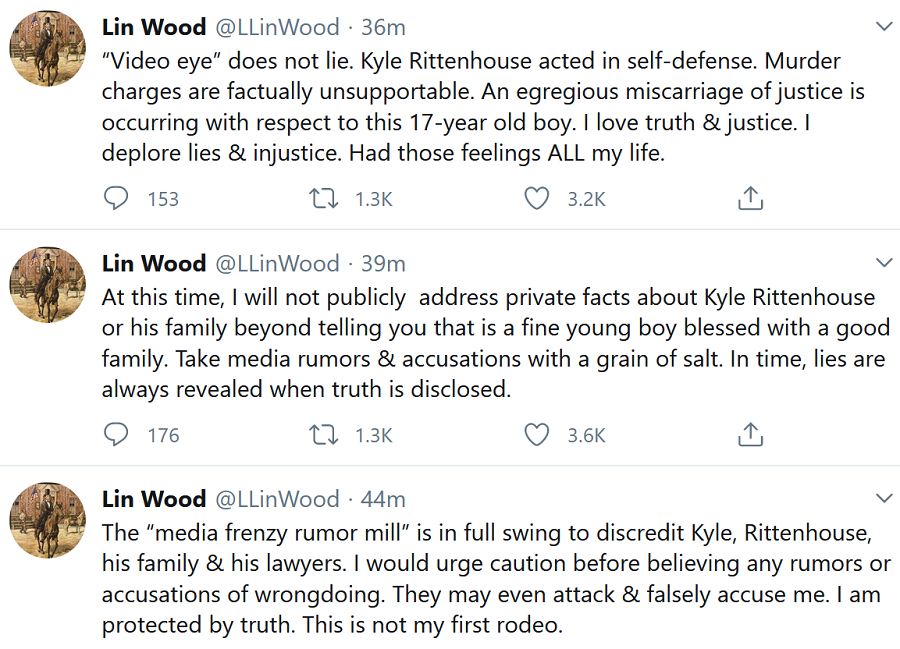 Note that Kyle was not arrested in Kenosha.  He returned home in Lakeland County, Illinois, and was arrested there yesterday.  He is being held in the Lakeland County Juvenile Center.  This afternoon (8/28), an Illinois judge granted Kyle’s request to delay the extradition hearing to Sept. 25.   That will cool things down, and give time for his attorneys to provide the facts of what actually happened.

Ever hear of Aubrey Huff?  If you’re a big baseball fan you have, as he was a key player enabling the Giants to win the World Series in 2010 and 2012.  On Twitter — https://twitter.com/aubrey_huff — he defines himself as “Proud father. Believer. Podcaster. 2 time WS Champ. Protector of Toxic Masculinity.” He’s outrageously cool, and delights in infuriating woketards everywhere.

He sure did that on Wednesday with this tweet: 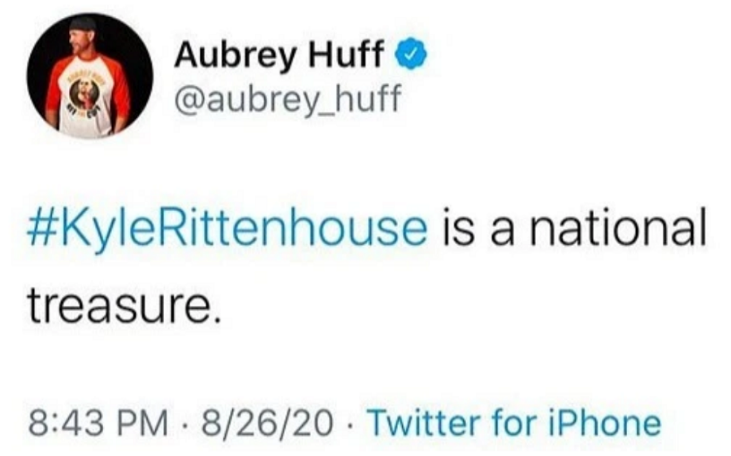 Check out his Twitter feed, you’ll laugh yourself silly.  Although the “national treasure” was taken down yesterday, the HFR certainly agrees with it.  Kyle Rittenhouse is the HFR Hero of the Week.

America needs thousands more like him.  To contribute to Kyle’s legal defense, here’s how:

Last night (8/28) was the finale of the RNC, Republican National Convention.  The Theme was America – Land of Heroes.  Here’s the open:

Here’s Alice Johnson, freed from 22 years in prison by a President of true Christian forgiveness and compassion.  How could any black voter consider in his heart not voting for him after listening to her?

Here’s Patrick Lynch, President of the Union of New York City Police Officers.  He pulls no punches, explains reality as it is.  Every voter in America should heed his words.

Here’s Madison Cawthorne, running for Congress in North Carolina in a wheelchair at age 25.  Every Millennial should be thrilled by his words.  And watch out – you may cry again.

There was more, but the key event of course was President Trump’s acceptance speech, delivered to a large live audience on the South Lawn of the White House.  It was well over an hour.  The video link is below, but first a selection of highlights.

“Despite all of our greatness as a nation, everything we have achieved is now endangered. This is the most important election in the history of our country. At no time before have voters faced a clearer choice between two parties, two visions, two philosophies, or two agendas.

This election will decide whether we SAVE the American Dream, or whether we allow a socialist agenda to DEMOLISH our cherished destiny.

It will decide whether we rapidly create millions of high paying jobs, or whether we crush our industries and send millions of these jobs overseas, as has foolishly been done for many decades.

Your vote will decide whether we protect law-abiding Americans, or whether we give free rein to violent anarchists, agitators, and criminals who threaten our citizens.

And this election will decide whether we will defend the American Way of Life, or whether we allow a radical movement to completely dismantle and destroy it.”

“At the Democrat National Convention, Joe Biden and his party repeatedly assailed America as a land of racial, economic, and social injustice. So tonight, I ask you a very simple question: How can the Democrat Party ask to lead our country when it spends so much time tearing down our country?

In the left’s backward view, they do not see America as the most free, just, and exceptional nation on earth. Instead, they see a wicked nation that must be punished for its sins.

Our opponents say that redemption for YOU can only come from giving power to THEM. This is a tired anthem spoken by every repressive movement throughout history.

But in this country, we don’t look to career politicians for salvation. In America, we don’t turn to government to restore our souls – we put our faith in Almighty God.

“Our opponents believe that America is a depraved nation.

We want our sons and daughters to know the truth: America is the greatest and most exceptional nation in the history of the world.

Our country wasn’t built by cancel culture, speech codes, and soul-crushing conformity. We are NOT a nation of timid spirits. We are a nation of fierce, proud, and independent American Patriots.

We are a nation of pilgrims, pioneers, adventurers, explorers and trailblazers who refused to be tied down, held back, or reined in. Americans have steel in their spines, grit in their souls, and fire in their hearts. There is no one like us on earth.”

“Over the next four years, we will prove worthy of this magnificent legacy. We will reach stunning new heights. And we will show the world that, for America, no dream is beyond our reach.

Full text is here.  Full video is here.  It was extraordinary.

So we come to the bottom line of the week.  The tide is turning, clearly.  Also clear is that the Dems are terrified – especially of Biden debating POTUS.  Many wags are saying the election will be over on September 29, the first of three scheduled debates.

The wags are having a field day now with Pelosi yesterday declaring Biden should cancel the debates.  Even CNN made fun of her.

Further, the violence in Democrat cities is going to spread and get worse.  On Wednesday (8/26) in Kenosha, police and US Marshalls stopped what would have been a full-on terrorist attack in the city.  A bus, a breag truck, and van from Chicago were carrying gas masks, illegal fireworks, helmets – and dozens of fuel cans which they were attempting to fill with gasoline at a service station.

But Kyle Rittenhouse is the first of many.  There’s no way Americans are going to put up with this much longer.  It’s creating such a wave of anger against it and the Dems supporting it that the Dems are going to be washed out to sea.

Then the legal war begins.  You’ve seen the clip from Tuesday (8/25), Hillary demanding that “Under no circumstances should Biden concede.”  This is full fascist.

Then it starts: 2020 Nightmare: Armies Of Lawyers Ready To Fight A Long Legal Battle Over Election Results.  Unless the victory is overwhelming – and the odds for that are growing by the day.

Here’s the close, what’s really happened to the Democrat Party in embracing hate for America and dreaming of destroying it.

Crank those speakers up, folks, for here’s the Democrats’ theme song, what it is now, what it will be in November – for they are on AC/DC’s Highway to Hell.  The lyrics have now become embedded in the Democrat soul:

And I’m going down
All the way

Is that really what all these maniacally cheering fans really want?  If so, they’ll be living it on January 20, when our POTUS is inaugurated for another four years.  Speakers up!