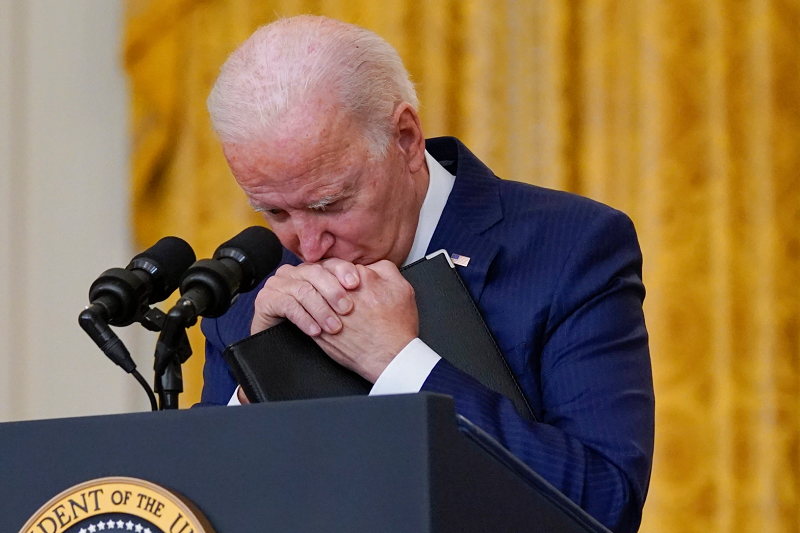 As this man bows his head in shameful realization of what he is responsible for, so should everyone in America who supported his being allowed to cheat his way into the White House.

The photo you see has gone wildly viral across the Internet as the “defining image” of his catastrophically failed Oval Office occupancy, as headlined by the Daily Mail late last night (8/26):

Nowhere To Hide, Joe: President Adopts Fetal Position Pose As He Crumbles Under Questioning From Fox News Reporter Peter Doocy And Tries To Blame Trump For The Catastrophe In Afghanistan. 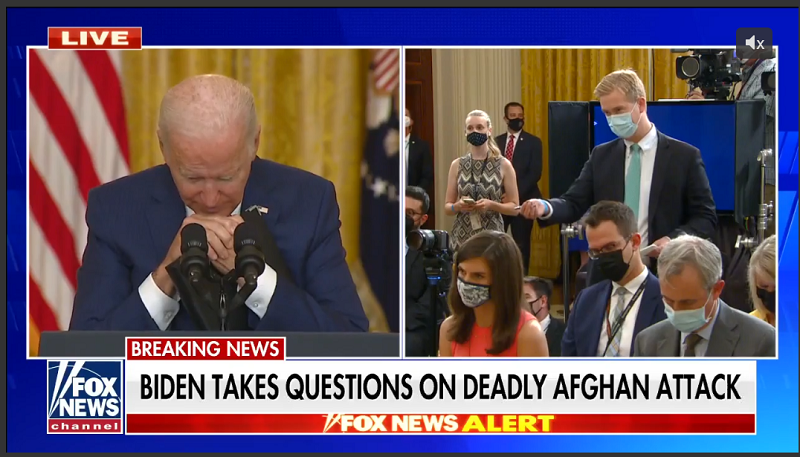 President Trump had this message to America last night on Hannity:

Yes, this “would not be happening” without Democrats committing election theft, without the Supreme Court allowing the theft, without VP Pence refusing to turn the electoral college back to state legislatures where the cheating was most blatant.  All Biden supporters and Never Trumpers who celebrated these acts of treason bear responsibility for the mass slaughter at Kabul Airport yesterday.  The very least they could do is to apologize to us.

It is in this context, however, that POTUS was wrong when he told Hannity last night:

“We are being led by people who have no idea what they are doing. They take the military out, and then they say, now we will bring out the people. And, all of a sudden, the Taliban walks in… This is the dumbest thing. I think it was the dumbest move anybody has ever made perhaps in the history of our country, allowing this to happen, taking the military out and then say, oh, we hope to get the people out.”

No, the dumbest thing was those above allowing the theft of the American presidency.  The worst problem now is there is no constitutional remedy for this, to legally reinstate the presidency from whom it was stolen.

As demands for Xiden to resign grow from his colleagues, Congressman Madison Cawthorn (R-NC) yesterday (8/26) wrote to VP Kamala Harris formally requesting she invoke the 25th Amendment process to remove him from office.  Suppose this happens – now what?  She’s a flat-out Marxist with a room temperature IQ and morals in the basement to boot.

Nonetheless, there are growing odds that this is going to happen one way or another.  Not the 25thA way, but just like the GOP power brokers went to Tricky Dick Nixon in the summer of 1974 to tell him to resign, so will the Dem power brokers led by Obama very likely now tell Joe he’s got to go “for the good of the country.” 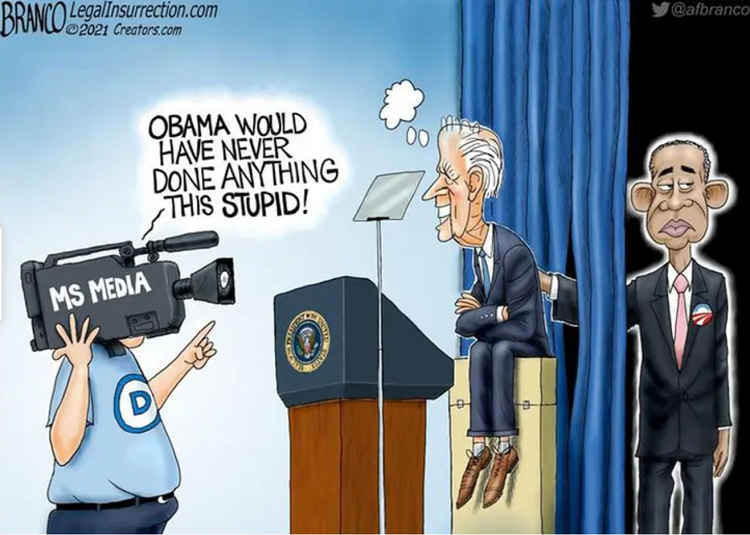 After the horror in Kabul yesterday and Xiden’s press conference – compounded by his stating at the start he had been “instructed” (his very word) on what reporters to call on, and that he allowed a list of all stranded Americans and Afghan allies given to the Taliban so the former can be held hostage and the latter be hunted down and killed – the Dem chiefs may decide to cut their losses and take their chances with Heels Up Harris.

The Dem media will hail her as “a fresh start, the first black woman president,” Joe will be thanked for his service and with tearful sorrow for his health, while Jill will be dragged out of the White House East Wing kicking and screaming.

This is exactly what the New York Dems did to their execrable governor Andrew Cuomo whose last day in office was Monday (8/23).  His LtGov Kathy Hochul’s first day as New York Gov was Tuesday (8/24) – with her first proclamation being a universal mask mandate in all New York schools, and appointing a Black Lives Matter Anti-Cop Defund Police Advocate as her Lt. Governor.

Not a good start, Kathy.  The HFR seriously doubts Kamala will do any better.  Any bets on who she’ll pick as her VP?

What will prevent her from having a woketard as VP is, it’s not an appointment but a nomination requiring majority approval by the Senate – meaning by Mitch McConnell in an evenly-divided 50R-50D with no Dem VP as a tie-breaker.  It will be entertaining to watch how this plays out. 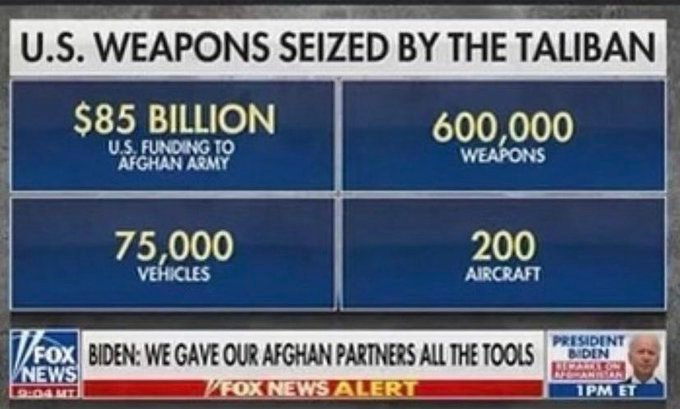 It is with supremely good reason that President Trump calls his impostor-successor the “Surrenderer-in-Chief.”  Here is the tally of what he surrendered by ordering the abandonment of Bagram Air Base.  As members of the world’s elite drug smugglers, the Taliban have this mother lode of modern weaponry to smuggle as well.

TTPer Mike Ryan gives us his Forum assessment of what nightmare this portends:

“It’s been about a week. By now, the Sinaloa Cartel probably has purchased the firepower to sink a Coast Guard vessel. Maybe it was ordered to use it when the world’s media needs the daily message changed. South Chicago is going to be armed with the big stuff.

And what of those 300 -1,000 MANPAD shoulder-fired missiles that Uncle Joe gave away? We will see them at airports everywhere soon.

You can take it to the bank that the southern border is being held open so that enough 150mm artillery shells can be smuggled into the USA and turned into IEDs to blow up a school bus full of kids in every district. Why else did Biden open the border when voting no longer matters? Why did he do it with such urgency, as if on a timeline? One could argue that it is easier to smuggle an artillery shell than a child. There is money and power in chaos.

It is probably just Biden’s incompetence that American streets were not flooded with m4 carbines back in January when the so-called insurrection took place.

CNN ran many m4 carbine stories at that time that appeared pre-written but made little sense given the peaceful streets. Next time around, BLM will have m4 carbines traceable to Afghanistan.

The Dems probably figured that Trump would have abandoned his post in December, Afghanistan could have been surrendered at Christmas. Given Trump’s tenacity, that false flag insurrection was likely a misfire. The plan to equip terrorists everywhere has become transparent. No wonder Biden has people locked up in solitary or Gitmo or unnamed CIA interrogation centers or wherever. The plan had to be salvaged.

Now it is clear why Biden kept troops in DC and kept the charade going. But he had first to get some woke generals in place before our army could be ordered to surrender, and it took longer than planned because of Trump and people like that pesky My Pillow guy.

And just who becomes the most powerful person in the world after American planes start falling to shoulder-fired missiles, IEDs start going off in shopping malls, and every thug has an m4? Why, hmmm, that would be the director of the FBI. Move over, Fauci.”

Ryan’s assessment implies that Xiden’s puppet-master is not Obama like the Branco cartoon above claims, but Communist China’s Xi Jinping, whose goal is the collapse of the US into uncontrollably chaotic violence.  This is entirely possible, the final stage of the CCP’s plan starting with unleashing their virus, ruining the Trump presidency, and engineering election theft for their puppet China Joe.

So Kamala-shamala, who cares, it’s Dems rearranging deck chairs on the Titanic.  The Chicoms want the USS America to sink to the bottom of the sea.

How is this ultimate nightmare for our nation to be prevented?  The first step is to wake up from it. To do this successfully, in the right way at the right time, is going to take massive political skill and care.

At some point in the not-distant future, the consequences of Xiden’s perfidy in Afghanistan will become unbearable – especially when combined with Bidenflation and open borders resulting in terrorism.  At that point, we need a J’Accuse! Moment. 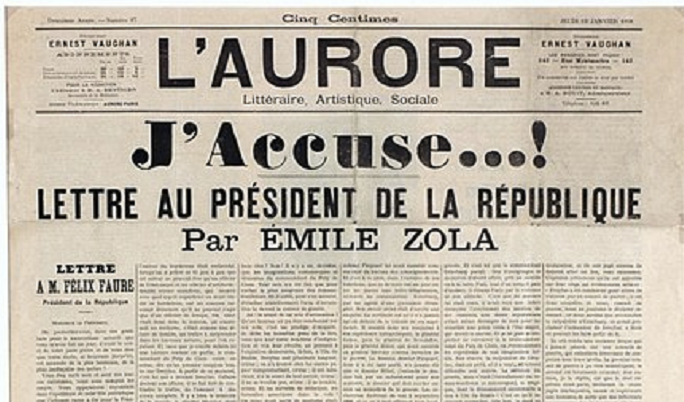 In 1898, famous French writer Emile Zola accused the President of France of willfully committing a crime, causing a world famous scandal.  Who would be best to accuse Xiden (as president or after resigning) of treason to China?  That’s obvious.  The man who has this kind of adoration – last Saturday night in Cullman, Alabama:

What’s not obvious is the subtlety required.

What the Chicoms want is for America to tear itself apart in a civil war.  The way to prevent this, after sufficiently punishing the principal perps via resignation, humiliation, and possible imprisonment (China Joe, Milley, Blinken, Austen, Pelosi et al), and shaming the Dem media/social media into an acceptable degree of remorse, is to unite Americans in a common revulsion towards the Chicoms for their attempt to destroy us.

This would be a Christian solution – forgiveness after remorse.  And public recognition of Chicom evil does not require any military retribution.  The sufficient punishment for the Chicoms would be their world-shaming, a world-wide loss of face – for losing face is the greatest Chinese fear.

If POTUS could pull this off, he would be an even more heroic former president than he was as president. And he certainly would ensure his being a future president in 2024.

We got off to a start on this at noon today (8/27): House Republicans Introducing Articles Of Impeachment For Secretary Of State Blinken.  Next will come Xiden’s SecDef “Pink Lloyd” Austen, then for Milley to be court-martialed.  Watch for media puff-pieces lauding Heels Up.

There were other promising events this week:

Yet this may all be small beer compared to what’s coming – especially if Mike Ryan’s surmise comes to pass.  What we must hold on to is a determination not to let the Chicoms succeed in their goal of destroying America by setting Americans at each other’s throats.

Once our fellow countrymen realize they have been on the dark side and have been suckered by the Chicoms who are equally their enemy as they are of us, America can prevail.  Hold on to that.