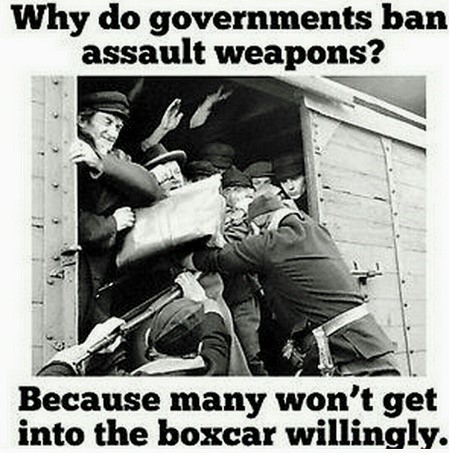 Or to put it another way: 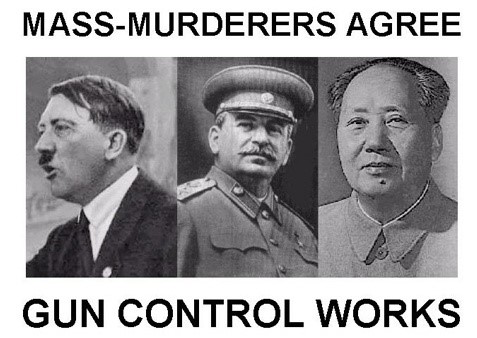 That lesson, however, is not the one being taught above – for it is one that every conservative and patriot knows full well: that tyranny requires a disarmed citizenry to be successful.

No, the lesson is that all the gun-control hysteria is from the Left – and that is because the Left is unrelentingly and thoroughly Fascist.

The goal of the Left – including most every Democrat and Fake News Waste Stream Media member – is neither prosperity nor safety of people but government tyranny over them.

In an op-ed of pathological chutzpah today (2/23), a Chicom propaganda organ, China Military, claimed: China Can Offer Lessons to US in Protecting Human Rights.

Here you have the most mass-murdering regime in human history, with the Guinness record-holder of mass-murder, Mao (45 million unarmed Chinese in 4 years alone) on every denomination of Chinese currency, lecturing us on human rights.  And note, every one of the Chicom gun-control arguments is taken straight from the choir book of Fake News gun-control Lefties.

The lesson continues.  It is that Lefties truly believe in their hearts that they are moral people.  That’s possible because their morality is fundamentally the opposite of us normal people.  Meaning, Democrats and Fake Newsers have the morality of Marxism embedded in their souls.  The morality of The Ends Justify The Means.

Thus they instantly politicize a horrible tragedy like the Parkland shooting, to advance their goal of disarming Americans as a necessary condition for tyranny.  They get to tell any lie, to manipulate the natural grief and anger of parents whose children have been senselessly killed, to demonize a primary obstacle in their way, the NRA.

Thus we arrive at the concluding lesson.  Unless we find a way to disinfect Leftie souls of Marxist morality, becoming a normal human being of moral health, then there can never be peace with them.

Understanding this enabled Ronald Reagan to defeat the Soviet Union and win the Cold War.  Reagan knew that the morality of the Left – Soviets, Communists, Fascists of all stripes (which now includes Dems and Fake Newsers) – defines “peace” differently than normals.

For us, peace means freedom: people being left alone without violence so they can conduct their lives and work towards their goals peacefully.

For Lefties, ‘peace’ means obedience: they give the orders, and everybody else obeys. When the ‘the people’ are all good little boys and girls and obey their masters, you have order, and then you have ‘peace.’

Reagan realized there can be no peace, no absence of violence or endless lies, fraud, intimidation and threats, with the Soviets and their Marxist morality.  That’s why he defined his policy towards the Soviet Union in four simple words: “We win, they lose.”  Those words won the Cold War.

We keep hearing that America today is in another Civil War.  No, America is waging another Cold War, with the same enemy possessing the same morality, with Soviet Communists replaced by American Fascists believing that peace can only mean the absence of disobedience to them.

And there can be no greater threat to that absence than lots of good normal people with lots of guns enabling them to disobey.

It’s sad to watch the FNN – no longer CNN nor even Fake News Network, but now Fascist News Network – engage in child abuse and totally cynical, i.e. Marxist, gun control rabble-rousing and see hurt kids and parents fall for it.  For that’s exactly what it did at its staged Fascisti Fest on Wednesday night (2/21): CNN Pimps Traumatized Kids To Push Politics.

Yet after the rabid rage-venting is out of their system, most Parkland families will regain normalcy.  Americans do this better than anyone.  You often see smirking bitterness like on Twitter towards “the sheeple” – the claim that a majority of people can be led around like sheep.

That’s obviously not true – if it were, how did Trump get elected, and handily?  Another example is the utter failure, after massive every day for years attempts by the entire Fake Fascist News Media using every propaganda trick known to history, to convince Joe & Suzie Sixpack that there really is such a thing as Man Made Global Warming.

So here’s a prediction.  Those companies capitulating to the latest PC Leftism – demonizing the NRA – will soon regret it.

Yesterday afternoon (2/22), the First National Bank of Omaha announced it would sever its credit card contract with the NRA.  This morning was the start of a flood of calls from bank customers infuriated by the bank’s cravenness that’s continued all day.

A libtard fascisti site called ThinkProgress put out a hit list of companies that partner with the NRA.  These are companies to support if they don’t capitulate.  And if they do, it’s an open invitation for their competitors to take their NRA business away from them.  You could tell them that.

No need of course to tell that to POTUS:

While this morning (2/23) at CPAC, he told a wildly cheering crowd that as long as he’s President, the Dems will be unable to take down the Second Amendment, their fondest dream.

Trump’s CPAC speech was a barn-burner.  When you have a spare hour and 14 minutes, take the time this weekend to watch it:

Spoiler Alert:  he concludes by saying that “America is roaring back – America is going to be bigger and better and stronger than ever before.”

That’s his commitment to us and our country.  It’s the last thing on earth the Fasciti Left wants.  Too bad for them.  For Trump’s mantra towards them is the same as Reagan’s towards the Soviets:  “We win, they lose.”

Along with hatred for guns, the other hatred that drives the Dems and FFNN is Americans as opposed to illegal aliens.  This of course is why: 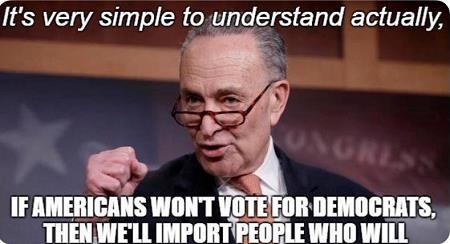 Everybody at CPAC understands this – which is why they stood to their feet and cheered when Mike Pence assured them last night (2/22):  “We’re going to build that Wall.”

What has now got Lefty undies in a twist is a guy named Frank Cissna.  You may not have heard of him but you’re going to like him.

US is no longer a ‘nation of immigrants’: Agency in charge of green cards and citizenship changes its mission statement to say it now administers the ‘lawful immigration system’ while ‘protecting Americans’ is the Daily Mail headline this morning (2/23).  Oh, the woe.

As Breitbart explains, Trump’s immigration agency “has flipped its Mission Statement to put Americans and assimilation first, immigration-applicants and diversity second.”  Enjoy the sound of Lefty garment-rending and teeth-gnashing.

There was an interesting but strange article in Breitbart on Tuesday (2/20), promoting a Dem-Pub lobbyist cabal’s plan to Pay for Trump’s Trillion Dollar Infrastructure Plan and Reduce the Deficit by Auctioning Off Government Assets.

I was elated at first, but it goes weird arguing that selling “troubled government assets like buildings” is going to raise trillions.  I thought it would, but doesn’t, advocate the obvious – sell the 28% of the entire country owned by the Federalies, most all of which is unconstitutionally possessed: 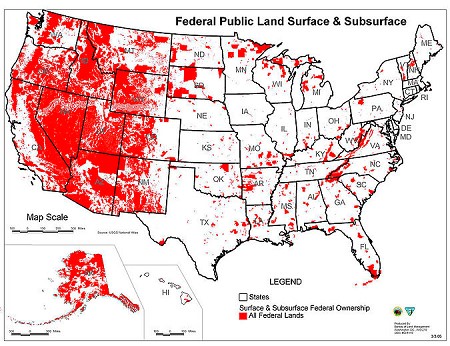 Auction off all the land in red – save for national gems like Yellowstone and the Grand Canyon, and military reservations – and POTUS can Build the Wall and have his $T Infrastructure with money to spare.

************
Actually, Trump Interior may have already jump-started this Sell the Land proposal.  In an announcement updated to Tuesday (2/20) of “The Largest Oil and Gas Lease Sale in US History”:

“In support of President Donald J. Trump’s America-First Offshore Energy Strategy, Deputy Secretary of the Interior David Bernhardt announced that the Department will offer 77.3 million acres offshore Texas, Louisiana, Mississippi, Alabama, and Florida for oil and gas exploration and development. The region-wide lease sale, which is the largest in U.S. history, is scheduled for March 21, 2018, and will include all available unleased areas in federal waters of the Gulf of Mexico.”

There’s a word for this that Lefties hate:  Winning.

You hopefully read this week Ambrose’s US Frackers Are the Skunks at the Putin-OPEC Garden Party (2/21).  Our fracking heroes are also spoiling Iran’s party as well:  Iran’s oil revenue plummets as US oil exports grow, according to the Islamic Republic News Agency.

With opening up our Continental Shelf and Federal Lands for oil and gas production, plus continuing improvements in fracking extraction technology, the US is going to be world dominant in energy for years to come.  Again, just think of the misery and woe that brings to Lefty Climate Changers.

A note on the blatantly fraudulent Mueller investigation.  First is the question the Wall Street Journal asks of Mueller’s Russian Indictments:  Where Were James Clapper and John Brennan While the Kremlin Was Meddling?

It’s a question that POTUS thinks AG Sessions should answer:

Second is to peruse ace reporter Sharyl Attkinsson’s Collusion Against Trump Timeline.  It starts in 2011 and ends yesterday (2/22).  The real collusion – which Mueller corruptly refuses to investigate – has nothing to do with Russia,  It’s always been Obama and his minions.  Sharryl’s timeline is masterful.

We started with a Sobering Lesson.  We’re ending with another, provided by ace TTPer Joe Katzman.  He offers three links for you to consider if there hasn’t been a Broward County Cover-Up of Parkland.

First is a corrupt scheme by the schools to avoid arresting students for felonies, in order to keep funding flowing.  Note that once an arrest is on the kid’s rap sheet, he can’t legally buy a gun as Cruz did.

Second is the armed security guard now deemed the Broward Coward stationed to protect the school ran and hid.

Third is reading this, and wonder if Nikolas Cruz is going to accidentally shoot himself several times from the shame. In the back of the head.

The HFR Hero of the Week provides a sobering lesson in Leftie perfidy – and in genuine heroism:  Colton Haab.

Recall that Colton is the 17-year-old member of the Junior Reserve Officers’ Training Corps who ushered 60 to 70 people to safety in an open JROTC room during the Parkland school shooting, and thought to protect them with Kevlar sheets from the marksmanship program.  Yet the FFNN just wanted to use him to demonize the NRA – and he refused.  A very heroic kid.

We end with story time – a personal one.  In 1929 my father was 16 years old.  My grandfather Lucien handled private security for Jack Warner and Warner Bros. studios.  It was the height of Prohibition, and wealthy Mexican businessmen had built a glorious booze-fueled resort across the border called Agua Caliente.

All the Hollywood elite were at the opening, including of course Jack Warner.  Lucien was with him – and my Dad.  One of the Mexican investors wanted to introduce his daughter, who was my father’s age, to Mr. Warner.  Her name was Margarita Cansino, and when my father saw her, he knew why.

She had the beauty of a goddess.  My father was completely entranced as they went for a long walk by themselves in the moonlight on the resort’s golf course.  They got along for – I’ll have to find the picture I have of my Dad when he was really young – he was as handsome as Rudolph Valentino.

At any rate, they never saw each other again.  Warner did sign her to a contract, but it couldn’t take effect until she was 18.  Then she moved to Hollywood, where Warner changed her name.  Here’s a compilation of her movie dancing set to Stayin’ Alive.  TTPer Edd Forke tells me she was the only dance partner that ever intimidated the great Fred Astaire.