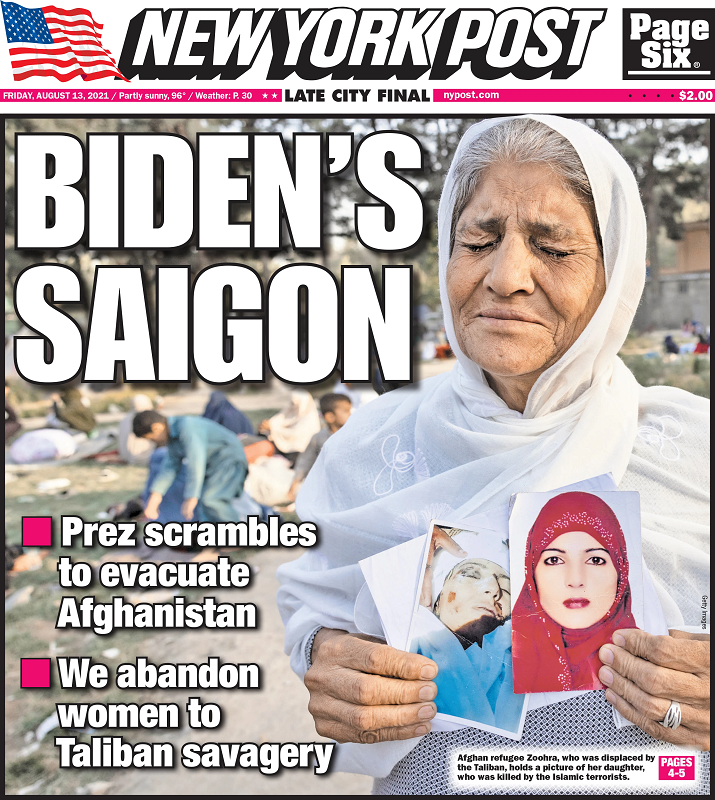 Welcome to the Friday the 13th HFR.  It’s a majorly bad luck day for the putz pretend president infesting our White House with the contempt and ridicule of the world pouring down upon him.

Above is today’s (8/13) New York Post cover, with the cover story inside:  This Afghan Rout Is Entirely on Joe Biden.

“It doesn’t get more idiotic: ‘The Taliban also has to make an assessment about what they want their role to be in the international community,’ White House press secretary Jen Psaki said with a straight face Wednesday (8/11)…

Hello? The Taliban have never given a damn about world opinion… These are fanatics out of the 10th century. They’re turning girls as young as 12 into sex slaves as they advance.

The Afghan army, meanwhile, is showing all the fortitude of the Iraqi forces who melted before ISIS in 2014: Provincial capitals (plural) are falling every day, with Nos. 10 (Herat) and 11 (Ghazni) gone Thursday… Now it’s a race to Kabul, where Uncle Sam is desperately rushing to airlift out all Americans in a replay of the 1975 fall of Saigon.” 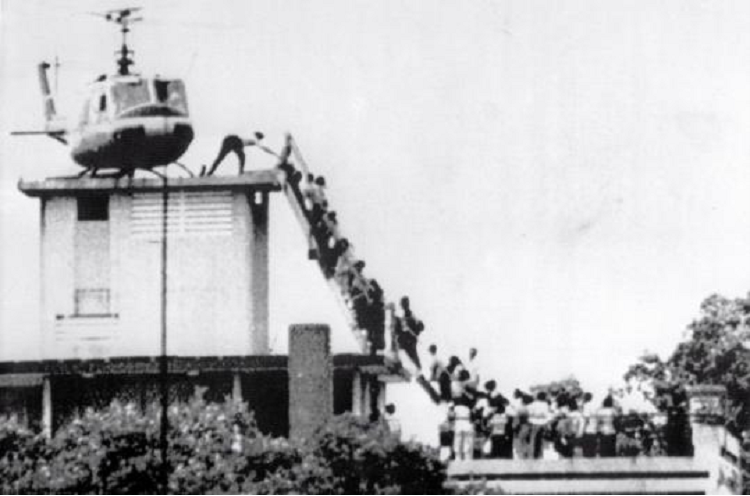 Taken by Dutch photojournalist Hugh Van Es on April 30, 1975, it is the historic symbol of America’s humiliation in Vietnam.  In the space of 24 hours, CIA helicopters landed every 10 minutes on the rooftop of the US Embassy in Saigon to evacuate American diplomats and at-risk Vietnamese from the Communist conquerors of South Vietnam.  Dubbed Operation Frequent Wind, almost 2,000 Americans and over 5,000 Vietnamese scrambled up a ladder to their rooftop rescue.

Now we are facing another American humiliation.  As the Post notes, most Americans wanted the removal of US ground forces from Afghanistan as President Trump promised in what had become an endless war… but:

“But any pullout had to have a plan. Not an utterly disastrous cut-and-run, with virtually no provision for the Afghans who worked with us all these years.

The Army of the Republic of South Vietnam fought off an invasion in 1972 — with the help of massive US air power; 1975 was a disaster because anti-war liberals in Congress prevented more airstrikes.

The same thing is happening now in Afghanistan. Adela Raz, the Afghan ambassador to the United States, is perfectly right to complain that current US air support is ‘extremely limited’. Nothing forced Biden to go soft there.”

Yet he has – with history recording that the horror about to befall Afghanistan is on his watch and is his fault. He now owns it all.

You might, however, caveat that.  After all, it’s as clear as bright sunlight that Xiden is a senile moron who can’t think his way out of a wet paper bag.  He has a 50 year political history of non-accomplishment and cheap corruption – but no history of being rabidly Hate America Commie-Marxist.  The inescapable conclusion is that he’s a puppet. 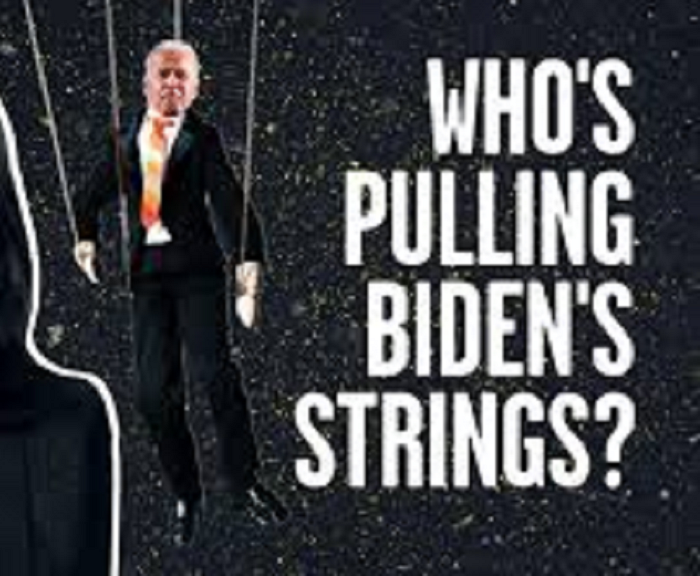 There are many candidates… 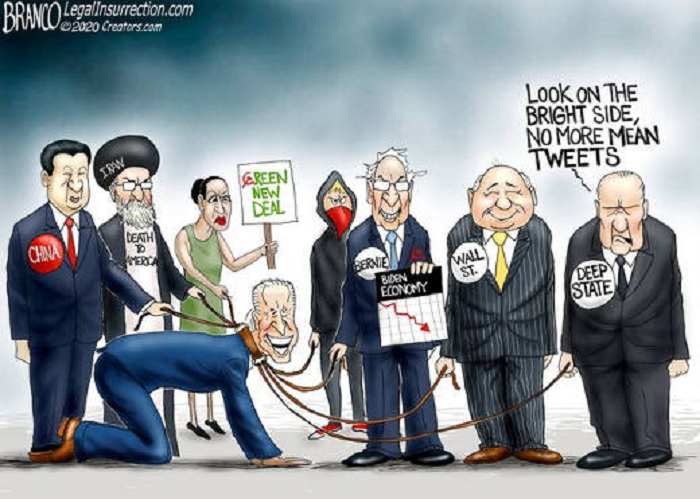 Yet for some reason, the most obvious one is missing.

That would be a man raised and mentored by a Hate America Communist (who many believe is his actual father, the resemblance is striking); whose pastor prayed for God not to bless but to damn America; who had classified access to all CIA, FBI, and NSA evidence of massive Xiden corruption; and has surrounded Xiden with his close confidants as senior presidential aides in the White House.

That would Zhou Xiden’s real puppeteer: 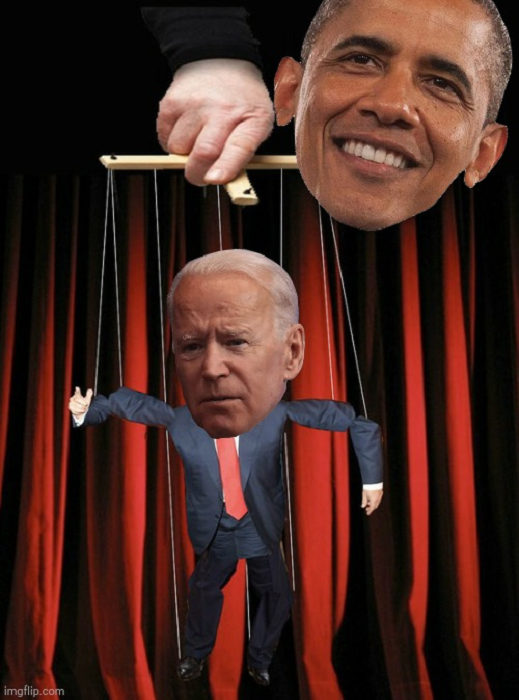 Yes, President Zero himself.  Obama has always kept his Hate America persona well-hidden behind his smooth style and demeanor.  His satanic secret, that destroying America has always been his dream, can now be achieved using a surrogate puppet with impunity and no blame.

It’s Biden’s Saigon, not Obama’s; Bidenflation;  not Obama’s; Biden’s illegal and diseased alien invasion, not his.  He need not lift a finger save for pulling his puppet’s strings, remaining blameless even though he says not a word of condemnation as America  is burned to the ground.

See for example Sundance’s contention yesterday (8/12) regarding “the four stages of ‘ideological subversion’ created by radical Soviet Marxists to indoctrinate and weaken nations from within, (and that) the Chicago Marxists aligned with Barack Obama (revolutionary communists) were/are following this ‘four stage’ roadmap.”

That’s not to say Zero is Zhou’s only puppeteer.  There are others, this one in particular: 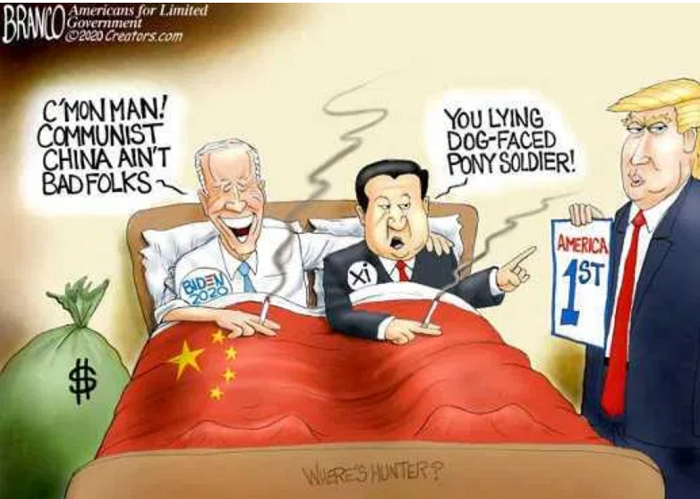 But it is to say that both of them, with others like Putin, Soros, and America’s Woketards, all have the same goal: the ruination of the country they hate and we patriots love.

It is to say that all the ruination suddenly being inflicted upon us in the last not quite seven months is being done on purpose with malice aforethought by Obama, the Chinese Communist Party, and the American Left working in concert.  All of it.

So… let’s ask Lenin’s most famous question: What is to be done?

First is to realize you have to save yourself and your loved ones before trying to save America.  Two suggestions for this:

*Break all ties with anyone or anything “Woke.”  If you work for a woke company, quit, there are plenty of good jobs around. Get off Facebook, Twitter, and Woke Media.  The CCP (Chinese Communist Party) recently condemned TikTok as “electronic opium” – and the Beijing Commies are right.

Don’t get hooked, don’t let your kids get hooked – and realize that if they are, they will go into actual drug-withdrawal symptoms if they go cold turkey, so work with them so they can get their lives back.

Realize also that being around friends, workmates, relatives, acquaintances et al who are woketards is poisoning to your brain.  Realize that Communism, Nazism, Fascism, Islamism et al are all different brands of Wokeism.  Which is why Cancel Culture people are fundamentally anti-American.

Being demonized by divisive hate is the total antithesis of the Live and Let Live model of American tolerance and cultural “E Pluribus Unum” comity.  Get these people out of your life, leave them alone, and insist they do the same to you.

Second is to follow Rand Paul’s advice to resist.  This means engaging in peaceful civil disobedience to fascist government or corporate edicts.  It will be vastly easier to do this in a red county and/or red state.  You’ll have a lot of company.

Okay, here’s a third.  In maintaining and improving your physical and mental well-being, consider perusing TTP’s Keeping Your Sanity feature for whatever may be useful to you.  We’re up to 24 in the series so far – and I can tell you XXV next Monday (8/16) is going to blow you away. Hint: it will discuss a way to literally regenerate woketard brains back to sanity.

Let’s get to some fun and some good news.

In Aberdeen, Washington (near the shore west of Seattle), there is an amazing store for Star Wars aficionados, Sucher & Sons Star Wars Shop. It’s owned and run by a cool old guy, Vietnam Vet Don Sucher.  As a gag, he put a sign up on his storefront window: 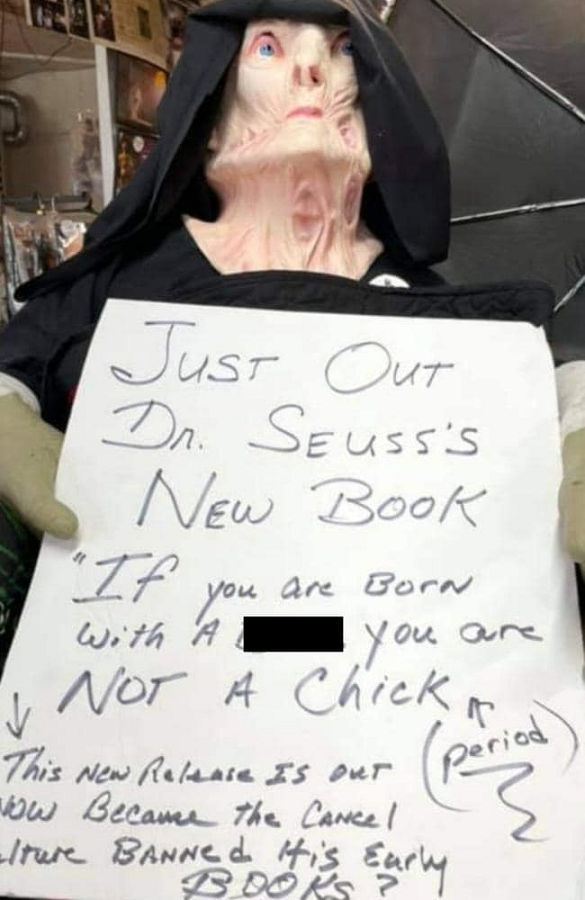 That’s because a man named Nathan Kennedy just got elected to the Aberdeen City Council as a tranny calling himself Tiesa Meskis, and Don wanted to poke some fun at him.

“What was originally planned as a protest against a local business owner over a sign in his shop deemed to be transphobic turned into a large show of support in the latest chapter of the Star Wars Shop saga.

Dozens of supporters arrived at the Sucher & Sons Star Wars Shop on Wishkah Avenue in Aberdeen on Saturday in what was originally scheduled to be a protest by pro-LGBTQ demonstrators after a controversial video went viral earlier this week. [The LGBTQ-Antifa protest was canceled].”

Don Sucher is the HFR Hero of the Week.

The HFR Hero State of the Week is an easy call:  Texas.  How about this quartet this week?

Tuesday (8/10): Texas Supreme Court Allows For Arrest Of Democrats Who Don’t Show Up To Legislature

Dems know their only single hope of not being wiped out electorally in the 22 mid-terms is to keep the cheating enabling cheat-wins last November – so are hysterically determined to prevent real voter reform.  If they lose the battle in Texas, the voter reform/voter ID bandwagon is rolling through every red and purple state.

Today, August 13, is a day of real history – for today is the 500th anniversary of the Fall of Tenochtitlan, the capital of the Evil Empire of the Aztecs, and the liberation of the peoples of Mexico by Hernando Cortez, on August 13, 1521.

Cortez freed them from Aztec subjugation and the monstrous practice of human sacrifice in the bloody thousands every year.  From every corner of the Aztec Empire, men, women, and children were sent to Tenochtitlan to have their hearts cut out from their bodies while still alive, to feed their gods with live beating hearts.

Cortez erased this, replacing Aztec monster gods with the God of Christianity who asked for love and prayers, not blood and death.

How this happened is one of the most heroic sagas of history, and one of the most misunderstood and maligned.  This has led to a civil war within the souls of the people of Mexico, which can only end by their embracing the truth of their real history.  With that can come peace inside Mexicans themselves, and peace with America instead of the war they are waging now by allowing this horrendous illegal alien invasion across our border.

To understand this history and its Christian heroism, you need to read my book:  The Jade Steps: The Story of the Liberation of Mexico by One of History’s Most Heroic Women.

For yes, it was a woman, Mexico’s First Christian, who made Cortez’s victory possible.

I just finished re-reading it, which I hadn’t done in a while.  No false modesty – I was blown away by how good it is.  This is my first and only novel, a historical novel that adheres to recorded history, and frankly, I am dumbfounded as to how I could write something this good.

So I am asking that you consider reading it yourself (it’s less than 10 bucks on Kindle), and if you’re impressed, leave a review on Amazon and suggest it to your friends.  This is a story that needs to be told and understood.  It is history of 500 years ago, and could not be more relevant to what is happening today.  I really think you’ll enjoy it.