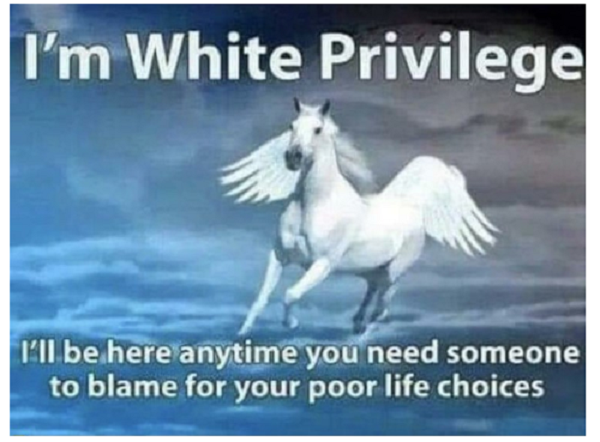 The Left’s current Hate America mantra is to accuse our country of “systematic racism” – the cosmic irony being that it’s true.

For decades, America’s laws, hiring practices, college acceptances, portrayals of villains in movies, on and on, have been systematically racist: towards Whites, White heterosexual men in particular.  Today we have reached the culmination of this pathology:  systematic auto-racism.

The most insane thing about the most thoroughly insane period in our lifetimes is the majority of people condemning “white privilege” are whites themselves: 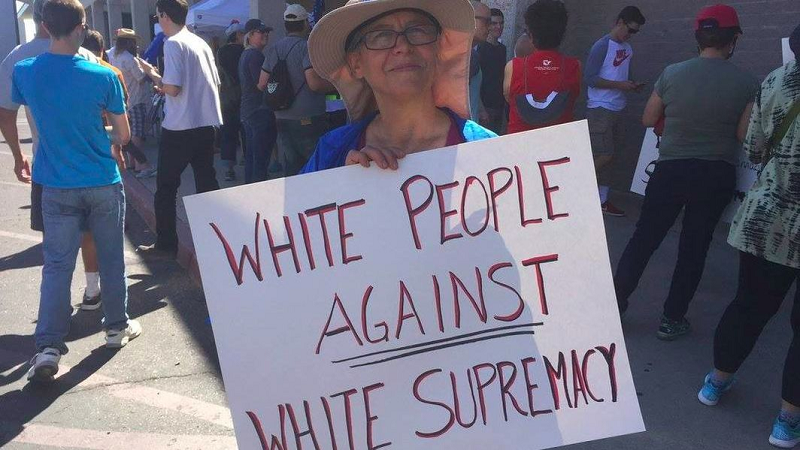 But the backlash has finally begun.

Anti-White Racism has now taken over Hollywood with total racist fascism, as documented by the London Daily Mail.  This is a long article — actually two-in-one with two long titles.

Hollywood’s identity crisis: Actors, writers and producers warn of ‘reverse racism’ in the film industry which has created a ‘toxic’ climate for anyone who is a white, middle-age man

What it feels like to be CANCELLED: It’s the mob’s weapon of choice – trying to take away their victim’s livelihood – it’s even happened to the cartoonist for the Communist Morning Star and the organiser of a gay pride parade

TTP rejects the term “reverse racism” which makes no sense, hatred of other human beings for the color of their skin is racism pure and simple no matter what the skin color.  That said, the fascist totalitarian tyranny in Hollywood described in this article is what will completely take over America as a whole if Trump loses.  It is the must-read of the week.

Gutsy reporter Andy Ngo has a score of video clips of the violence last night (7/23) on his twitter feed:  https://twitter.com/MrAndyNgo.  Federal agents only come out of the federal building under attack rarely, then retreat back inside.  Sadly, all the POTUS talk about sending in armed feds to shut this violence down is just that – all talk and no action.

On Wednesday (7/22) in the East Room of the White House, the President announced Operation LeGend: Combatting Violent Crime in American Cities, named after LeGend Taliferro, a four-year-old boy who was shot and killed last month while he lay asleep in his home in Kansas City, Missouri.  His parents and grandparents were the President’s guests at the announcement.

POTUS announced DOJ “will immediately surge federal law enforcement” to Kansas City, Chicago and Albuquerque – no mention of Portland or Seattle, much less New York City.  WaPo gloated this morning (7/24) one lonely arrest has been made so far.

It will be a disaster for Trump if his vaunted operation is a nothingbuger.  He has allowed this Fascist-Commie mob violence to continue unabated for close to two months now in Portland.  Another eruption of the same going on in Seattle.  Horrifically same in Chicago.  Every normal person in the US wants this shut down, whatever it takes.

What would be dispiriting if it weren’t par-for-the-course expected: the gutless wonders of Corporate America caving to the Cancel Culture.  The sneer attributed to Lenin is coming true before our eyes: “When it comes time to hang all the capitalists, they will sell us the rope for the nooses.”

The most willfully obtuse headline came from the Wall Street Journal this morning (7/24): Coronavirus Is Pushing the NFL Toward a Financial Cliff.  They expect a $4 billion loss this season, and there is not a single word about their Hate America multimillionaire prima donna players kneeling in insult to the national anthem contributing to it.

TTP has often mentioned over the years of the WSJ being schizo – an editorial page on the right, news page on the Libtard left.  That came in clear focus in this morning’s Opinion page in a statement by the WSJ Editorial Board: A Note to Readers:

These pages won’t wilt under cancel-culture pressure.  Here’s the statement in full.

“We’ve been gratified this week by the outpouring of support from readers after some 280 of our Wall Street Journal colleagues signed (and someone leaked) a letter to our publisher criticizing the opinion pages. But the support has often been mixed with concern that perhaps the letter will cause us to change our principles and content. On that point, reassurance is in order.

In the spirit of collegiality, we won’t respond in kind to the letter signers. Their anxieties aren’t our responsibility in any case. The signers report to the News editors or other parts of the business, and the News and Opinion departments operate with separate staffs and editors. Both report to Publisher Almar Latour. This separation allows us to pursue stories and inform readers with independent judgment.

It was probably inevitable that the wave of progressive cancel culture would arrive at the Journal, as it has at nearly every other cultural, business, academic and journalistic institution. But we are not the New York Times. Most Journal reporters attempt to cover the news fairly and down the middle, and our opinion pages offer an alternative to the uniform progressive views that dominate nearly all of today’s media.

As long as our proprietors allow us the privilege to do so, the opinion pages will continue to publish contributors who speak their minds within the tradition of vigorous, reasoned discourse. And these columns will continue to promote the principles of free people and free markets, which are more important than ever in what is a culture of growing progressive conformity and intolerance.”

The WSJ Editorial Board is the HFR Hero of the Week.

Let’s depart these shores now to see what’s going on in the Axis of Evil, starting with Chicoms Underwater.

Japan’s Nikkei News reports yesterday (7/23) China’s Three Gorges Dam – the world’s largest – may be in serious danger of collapse. The dam was built to hold back a maximum of 475 feet of water from the Yangtze River – it’s now nearing 540 feet and rising.

But that’s far from all.  It’s not that Three Gorges is China’s Dam of Doom threatening 400 million people living downstream.   India’s news channel TFI Global reports  Wednesday (7/22) that China has 94,000 Dams of Doom:

Most entertaining of all is TFI Global explaining how China’s military is “full of wimps, sissies, and little emperors.”

Pretty good time, wouldn’t you say, to order the closure of the Chicom Consulate in Houston?  After all, it is with very good reason Texas Congressman Mike McCaul observes that the consulate is an “epicenter of China’s espionage” on the US.

For years now, TTP has been explaining how Turkey’s Islamist Dictator Erdogan has been a major sponsor of ISIS, Al Qaeda, and other Moslem terrorists.  An example is Jack Kelly’s Turkey Is on the Side of the ISIS Terrorists from October 2014.

Erdogan’s Islamist dictatorship is also characterized by full fascist suppression of free speech and a free press.  Turkey has more journalists in prison than any other country in the world including China: here’s the list.  Those who managed to escape live in exile, many in Sweden where they formed the Stockholm Center for Freedom.

With their inside sources of information, the Center publishes the Nordic Monitor – and its latest issue (ereyesterday, 7/22) confirms the Erdogan-ISIS connection: Turkish Intelligence Tried to Pass Off al-Qaeda, ISIS Fighters as Moderates in CIA/Pentagon Vetting.

The revelation comes at the same time this week (7/23), when the EU Warns Turkey over Invading Greece Waters in the Mediterranean. Erdogan is ignoring the warning of course.  Greece may take military action.

To pile it on, Erdogan massively insulted every Christian on earth this week by converting Hagia Sophia – the gigantic Christian church built by Roman Emperor Justinian in 537 that had been a secular museum – into a mosque, holding Friday Moslem prayers there today.  Even China’s CTGN condemned it as evidence Erdogan Is Converting Turkey into a Theocracy.

If there is one leader the world needs most to be rid of, it would Recip Tayyip Erdogan.

*It is absolutely cool that on Tuesday (7/21), Florida Congressman Ted Yoho called his most obnoxious colleague – AOC – “disgusting” to her face, informed her she is “out of her freaking mind,” and our her earshot whispered she’s a “f-ing *****.”

She of course lost her non-existent mind.  About time someone said the truth about what she is.  Go Yoho!

*The Coolest Congressman of the Week, however, has to be my Texas friend Louie Gohmert, who yesterday (7/23) introduced a Bill in Congress to Ban the Democrat Party for Its Past Slavery Ties.  The Resolution (full text in link) demands the Dems renounce their past and change their name.  Louie explains:

“As outlined in the resolution, a great portion of the history of the Democrat Party is filled with racism and hatred. Since people are demanding we rid ourselves of the entities, symbols, and reminders of the repugnant aspects of our past, then the time has come for Democrats to acknowledge their party’s loathsome and bigoted past, and consider changing their party name to something that isn’t so blatantly and offensively tied to slavery, Jim Crow, discrimination, and the Ku Klux Klan.

To avoid triggering innocent bystanders by the racist past of the Democrat Party, I would suggest they change their name. That is the standard to which they are holding everyone else, so the name change needs to occur.”

*America’s worst mayor, an actual (no hyperbole) full-blown Communist, New York City’s Bill DeBlasio, has ordered 27 NYPD officers to guard his BLM painting on the street in front of Trump Tower while the city is experiencing its worst crime wave ever.  But people keep insisting on ruining it.  Note the lady “defacing” and “vandalizing” the racist mural is black:

Turns out, enter “BLM mural vandalized” on YouTube, and you’ll see wherever they are anywhere in the country, people are painting or spilling paint over them.  Wonderful!

*Coolest of all: Trump signs executive order ‘banning’ illegal immigrants from being counted in the 2020 Census.  Obviously, since it’s federal law that only US citizens can vote in a federal election, and the census is used for apportioning Congressional seats, illegals cannot legally be counted.

Here is the White House order Excluding Illegal Aliens From the Apportionment Base Following the 2020 Census.  The Dems are going totally bananas.

We’ll close with this last.  A study of the Cato Institute released yesterday (7/23) shows that 77% of Republicans do not want to share their political views, with pollsters or anyone they don’t know (compared with 52% of Dems and 59% on Indies).  More evidence that these media polls you hear about – like Biden ahead by 13% in Florida – are like believing the Moon is made of green cheese.

Only people as retarded as Biden will vote for him.  Okay, there are a lot of such folks, but very very far from enough.  If POTUS can just prevent Dem Voter Fraud, he wins in a landslide.