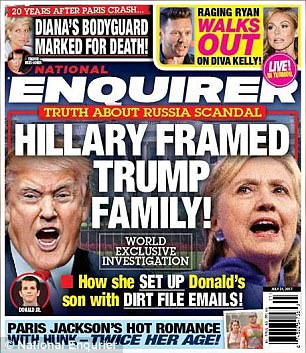 OK, it’s the National Enquirer, smirked at by people who pretend they are real journalists working for the Fake New Media.  This cover story appeared Wednesday afternoon (7/19).

Yet it got the immediate attention of the London Daily Mail, which ran a huge story that same evening (7/19):

National Enquirer releases ‘exhaustive investigation’ into ‘evil Hillary Clinton’ claiming she framed the Trump family over Russia and the Don Jr. meeting was a setup.

TTP, however, beat them to the punch Wednesday morning with Paul Roderick Gregory’s Is Russiagate Really Hillarygate?

Actually, that’s been a rhetorical question since two Democrat Hillary-fan journalists let the cat out of the bag last April.  Jonathan Allen and Amie Parnes started writing a book about Hillary’s campaign in 2014 with special insider access to her and her inner circle, fully expecting her to win in a walk.

Then the unimaginable happened.  She lost.  How could that be?  So they altered their hagiography to blame a host of folks, especially her campaign manager Robby Mook, and to insert with 20/20 hindsight all the “foreboding signs” that portended her defeat.

Then, in the final chapter of Shattered: Inside Hillary Clinton’s Doomed Campaign, entitled “The Aftermath,” Allen and Parnes reveal the origin of the Trump-Russia Collusion Hoax that the Democrats and its Fake News Media have been relentlessly using to stage a coup against the President of the United States:

“The strategy (to explain her loss) had been set within twenty-four hours of her concession speech.  Mook and Podesta assembled her communications team at the Brooklyn headquarters… they went over the script they would pitch to the press and the public.  Already, Russian hacking was the centerpiece of the argument.”

And there you have it.  With the Collusion Hoax narrative in place, it became the job of every Deep State Dem to leak damaging info to the Fake News Media; the FMN’s job to twist, hyperbolize, or lie about the info to put Trump in the worst possible light; and the Senate Dems’ job to delay Trump’s appointments replacing the Deep State Dems.

The bad news is that the Democrats’ coup attempt to overthrow the presidency – an act of unvarnished treason in the eyes of many – is proceeding apace.  Their first major scalp was Attorney General Jeff Sessions recusing himself from any DOJ investigation of the Collusion Hoax on March 2nd.

It was an act of brainless spineless cowardice, resulting in Session’s deputy appointing James Comey’s best friend Robert Mueller as Special Prosecutor to conduct an illegal fishing expedition to destroy the Trump Presidency.  All Sessions had to do was tell the Lying Swine that the business of the Department of Justice was to investigate real crimes not invented fake ones.

It is little wonder that Trump finally voiced his disgust at Sessions ereyesterday (7/19), saying:

“Sessions should have never recused himself. And if he would — if he was going to recuse himself, he should have told me before he took the job, and I would have picked somebody else.”

And who should that somebody have been?  Someone perfect for the job, who never would have caved to the howling media mob, but who put his ego before his country.  That would be Rudy Giuliani, who turned down being Attorney General when Trump offered it to him because he demanded being Secretary of State.  Only after Rudy’s rejection did Trump go to Sessions (note that Rudy didn’t get SoS either).

FYI, there’s a rumor afloat on Capitol Hill that Trump is talking to Ted Cruz about replacing Sessions should he resign.

So what’s to be done about Mueller?  Especially since Mueller’s team of Clinton Democrats is leaking to the press to damage the President.  Four things:

*Demand that Mueller investigate Clinton-Russia Collusion of which there is clear incontrovertible evidence.  Cf. Fox (7/19): Hillary Clinton Sided with Russia on Sanctions as Bill Made $500G on Moscow Speech.  One example of many.

As the IBD asks yesterday (7/20): Clinton Scandal Only Deepens — So Why Is Trump, Not Hillary, Targeted For Investigation?

And Erick Erickson gives a good summary of why the answer is Yes to: Were the Democrats Working with the Russians?

*Demand that Mueller hire politically independent investigators and fire those clearly compromised by their financial support of Hillary Clinton.

*Conduct opposition research on Mueller’s investigators to determine if they can be prosecuted for illegal conflicts of interests.  This in fact has started.  AP Headline today (7/21):   Trump’s Legal Team to Investigate Mueller Aides.

*Sue Mueller in court for violating the ethics provision of the Special Prosecutor law: 28 CFR 600,7 “Conduct and Accountability.”

The law specifically prohibits him from having a “conflict of interest,” which he clearly has with the key participant in the investigation: i.e., Comey’s Best Friend as Special Counsel ‘Massive Conflict of Interest,’ Former Assistant FBI Director Says.  Mueller must either resign or be criminally sued for willful violation of the law.

Time for a full court (pun intended) offense, Mr. President.  Give them a choice: Quit or Jail.  Time to end the coup attempt now.

Meanwhile, Michelle Malkin explains how, on Monday (7/17), the Weekly Standard’s Bill Kristol cemented his reputation as a Never Trump Hate America rectum: Manufacturing Hate for ‘Made in America’.

And what do you know?  Today (7/21) we learn that under Trump, there’s been a Boom in Mining, Construction, and Manufacturing.

What? More fun?  Okay, on Saturday (7/15), Trump supporters held a rally on Hollywood Boulevard to protect libtard defacing of Trump’s Walk of Fame star.  Masked Antifa fascists and other libtards showed up and began yelling at them.  One of them got into a shouting match with a Trumper.

While the Trumper was holding his hands behind his back, the long-haired TrumpHater hit him over the head with a poster-stapled stick.  Here’s what happened next:

This is precisely what needs to happen to violent fascist lefties – it’s the only language they understand.  The incident was instructive.  The next day (7/16), PJ Media ran an essay entitled The Shift.

Washington is in meltdown over Trump as Godzilla, from the entire leftie establishment calling itself the Resistance to the GOPElite:

“The Resistance so far has been less a call to rebuild Washington than the scream of someone having his leg amputated without anesthesia.  The GOP side is behaving like survivors shouting out a headcount after a collision to see who’s left alive.”

Yet the essay maintains Trump is not Godzilla but its shadow, only it’s advance man.  That’s us folks, that’s the guy who punched back in the video above.  We are Godzilla.  A commenter on the essay called “Subotai” (after Genghiz Khan’s main general) responded:

“When the Left unleashed its street thugs during the 2016 campaign, and kept them in action to date, they did more than the Elitists of both wings of the Governing Party comprehended.  Political violence is now de facto legitimate in this country after being condemned for generations.

The violence is not a good thing, but they themselves have made it a factor. And it will not remain one sided, since there currently seems to be no legal or political route to change. Not all, in fact only a small minority, of the Elitists are going to be able to escape to New Zealand.”

Let’s hope Antifa thugs, Deep State leakers, Fake News journalists and owners, Demtards and Rinotards take this to heart and stand down.  Get out of Trump’s way.  It is in their clear physical interest to do so.

With their blinders of hate on, they haven’t given a fleeting thought to the terrible consequences of their success.  If their coup against Trump succeeds, do they actually think that everything will go back to crony Uniparty normal with nice amiable President Pence?

Not a chance in Hades.  What on earth do they think 63 million voters voted for last November?  For them to be gone.  And if Trump is gone instead thanks to their treason, they will be dealt with as traitors by Godzilla, crushed into the mud..

They all need to take Jason Statham’s advice to the gangsters in Homefront:  “Whatever you’re thinking, rethink it.”

By the way, about time Trump did this:

And about time he did this too  — and not just once but 28 times in a row:  Trump Calls Obama a Liar.  Trump the Truth-Teller.

Oh, yes.  In that interview ereyesterday where Trump bashed Sessions?  The real bombshell was that Trump accused Comey of attempting to blackmail him with the ludicrously phony “dossier.”

On the international front this week.

*On Wednesday, TTP ran Why Is Russia Aiming Missiles at China?  Very good question.  Now it turns out that so is India: India Planning Missiles To Target All Of China.

*It’s Schadenfreude City in Germany today (7/21), with this headline: ‘Overwhelmed’ German legal system is on the verge of ‘collapse’ because so many migrants are appealing against decisions to expel them from the country.

250,000 phony “asylum-seekers” sent by Turkey’s Dictator Erdogan to Moslemize Germany at the invitation of Idiot Chancellor Merkel are making Germany ungovernable.  So sad – not.

*On Tuesday (7/18),  Israeli Prime Minister Bibi Netanyahu paid a historic visit to Budapest to meet with Hungarian Prime Minister Viktor Orban, and to thank Hungary for its fight against Anti-Semitism and the evil of George Soros.

Orban right now is Europe’s most courageous leader, refusing EU threats and demands to take in hordes of Moslem phony refugees.  He won’t do it.

Bibi personally thanked Orban “for standing up for Israel in international forums. You have done that time and again.”

He also thanked him for opposing George Soros’ efforts to destabilize Hungary as he does in Israel: an evil man “who continuously undermines Israel’s democratically elected governments by funding organizations that defame the Jewish state and seek to deny it the right to defend itself.”

Viktor and Bibi!  HFR Heroes of the Week.

There’s also news from Mars.  On Wednesday at a hearing of the House Committee on Science, Space, and Technology, Congressman Dana Rohrabacher asked NASA scientist Ken Farley this question:

Farley thought it was some kind of joke, but Dana looked at him in all seriousness.  All the stunned NASA guy could do is deadpan: “I would say that is extremely unlikely.”

Most of you know I’ve known Dana for many years.  I haven’t called him yet as I’m not sure I’ll be able to suppress the urge to say, “This is Earth calling Space Cadet Rohrabacher.”  So I have no idea what prompted him to do this, becoming an object of merciless ridicule all over social media thereby.  I’ll let you know what he says – sure hope it makes a semblance of sense.

Back to good news here:

Food Stamp Use Falls to Lowest Level in Seven Years (7/20).

All right, we’ll wrap this week up with Babes for Trump!

Here’s the headline:  Team Trump back on trend as army of women cause social media craze with ‘Make America Great’ swimsuits.

Here’s one self-identified Babe for Trump: 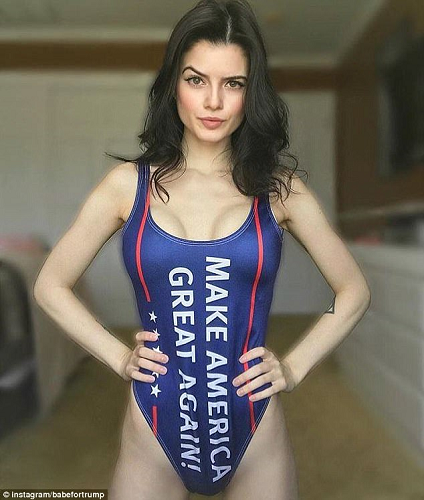 Yes, we are winning, we are Godzilla, and we will MAGA.

(NOTE: If you think you have not been getting the usual email alerts in your mailbox for sometime now, even though you are subscribed, please feel free to email us at [email protected] and we will re-add you to our mailing list. Thank You! – Admin)