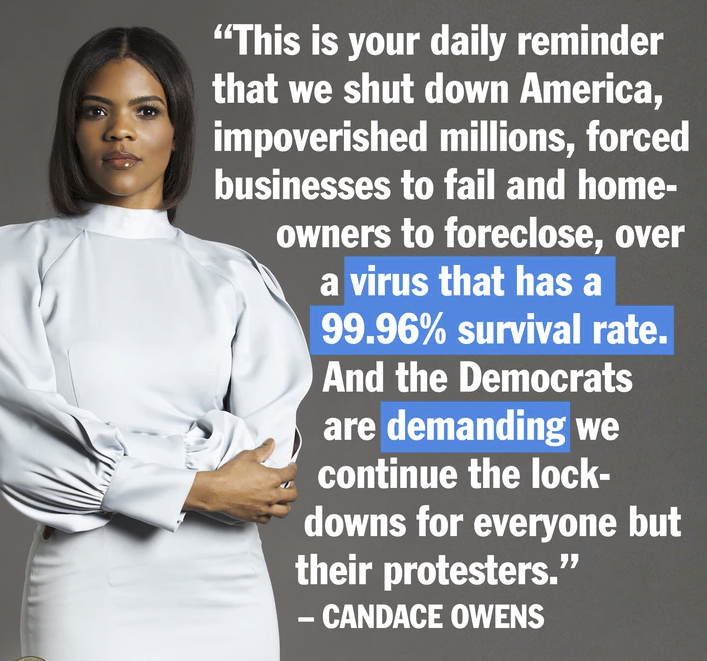 Welcome to “The Insanity Continues Unabated But POTUS Presses On Despite It” HFR.

As we all know, there’s one and only one reason why Governor Nuisance would put California back into a fascist lockdown again – to keep screwing people’s lives, their businesses, their jobs and livelihoods to prevent a V-shape economic recovery before the election.

There’s what Skye calls Reference Distortion Syndrome.  If you live in an insane asylum, you run the risk of ending up believing that crazy is normal, what’s depraved isn’t.

I have a relative who’s only source of information about the world is CNN and MSNBC.  You end up going Full Orwell doing that, convinced that good is evil, evil is good, and hating America is being patriotic.  Tragically, there are millions like my relative.

Then there are the polls with a RCP average of Biden beating Trump by 8.6% and even the most trustworthy, Rasmussen, showing Trump behind by 3%.

But here’s the question – the same question causing pollsters to get it egregiously wrong in 2016:  Why take a totally unnecessary risk telling a pollster you’re voting for Trump?  The answer is, they didn’t four years ago and aren’t now, in numbers so large they turn the polls upside down.

As Conrad Black argues yesterday (7/16) in Democrats Don’t Have the Winning Hand:

“Aggregators [like RCP] that issue averages of a group of polls cannot be relied upon because most polls, like most of the media, start from the conclusion they desire and reason backward. Almost all of these polls are of echelons of the population and not of likely voters, and there is always a reticence among pro-Trump respondents.”

This morning (7/17), Dave Catron takes this one step further: Why the Polls Predict Trump Is Going to Win.  He makes a very good case that the most accurate predictor of who wins an election is not who voters say they will vote for, but who they expect to win.

He quotes CNN analyst Harry Enten: “An average of recent polls finds that a majority of voters (about 55%) believe that Trump will defeat Biden in the election. Trump’s edge on this question has remained fairly consistent over time.”

This, Catron says, “is far more than mere statistical curiosity by number nerds. Several peer-reviewed studies have shown that surveys of voter expectations are far more predictive of election outcomes than polls of voter intentions.”

All the polls reporting how much Biden is “ahead” are about approval, never expectation.  Just about any poll that reports the latter instead would have to report Biden is behind.  Thus Catron concludes:

“The polls that appear to portend a one-term presidency for Trump actually predict that the President will trounce Biden badly this November.”

However… the Dems wouldn’t be showing their Fascist Hate America cards for everyone to see if they didn’t have an ace in the hole.  What’s that?  The clue is in Dave Catron’s question asked on Monday (7/13):  Why Has Biden Hired 600 Lawyers?

His answer is to launch a full-court legal war on any attempt of Trump’s to prevent mass voter fraud, which Biden calls “voter suppression”:

“In 2016, at least six states were decided by less than 1.5 percent of the vote. Any state that goes to Trump by a narrow margin will be pounced upon by Democrat pettifoggers screaming about ‘voter suppression’ and proposing bizarre recount schemes. [Biden’s army of lawyers] will make Bush v. Gore seem like a cakewalk.”

True enough.  Yet there is a second ace in the hole the Dems will employ:  engineering a Contingent Election.  Become familiar with the term.  Be comfortably seated with your favorite adult beverage at the ready, because here we go.

Article II Section 1, Clause 3 of the Constitution specifies that if no candidate for the presidency wins a majority of votes in the Electoral College, then a “contingent election” will be held by the House to elect the President, and the Senate will do so with the Vice-President.

What?  Pelosi gets to elect the President, maybe even herself?  Well, no.  This clause was replaced by the 12th Amendment passed in 1804, and then again amended by the 20th Amendment adopted in 1933.  What the Constitution as amended says is this.

*If the Electoral College does not produce a candidate winning a majority – now 270 – electoral votes, then the election of the President shall be by the House, and the Vice-President by the Senate.  The only candidates the House may vote on are the three top recipients of electoral votes; the Senate only on the top two.

*While a simple majority of individual Senators sworn in on January 3 elects the Vice-President, the House votes by state delegation, each delegation counting as one vote (e.g., California with 55 Members, Wyoming with 1 Member, each gets one vote).  It thus takes 26 votes, a majority of 50 state delegations (the District of Columbia is disallowed) to elect (or re-elect) the President.  In the current 116th Congress, Pubs have a bare majority of 26.

Got that?  George Soros has poured mega-millions into electing his puppets as secretary of state in multiple states, who control the elections in their state.  As of now, of the 27 states who have the office, 25 are Republican, 21 are Dem, one an Indie.  The lawsuits, legal warfare, and media/social pressure on the Pubs not to verify the EVs of their state for Trump will be monumental.

So every vote counts not just for the top of the ticket but for your Senator and Congressman.  Our national nightmare may be far from over on November 3 – it may just have begun.

This week, POTUS began an all-out assault on the imbecilic, pedophilic, corruptocrat the Dems have chosen to be his opponent.  The quick summary is:

The day before on Tuesday (7/14), he unloaded in a Rose Garden press conference.  You read about it yesterday (7/16) in Charlie Spiering’s 43 Disastrous Things Biden Would Do As President.  You might consider reading the full text of POTUS’ talk.  To really bring it home though, here’s a compendium of what the President had to say in his own words about this ridiculous, revolting man:

In contrast, Joe Biden’s entire career has been a gift to the Chinese Communist Party and to the calamity of errors that they’ve made. Joe Biden supported China’s entry into the World Trade Organization — one of the greatest geopolitical and economic disasters in world history.

As Vice President, Biden was a leading advocate of the Paris Climate Accord, which was unbelievably expensive to our country.  It would’ve crushed American manufacturers while allowing China to pollute — pollute the atmosphere with impunity.  Yet one more gift from Biden to the Chinese Communist Party.

So Joe Biden and President Obama freely allowed China to pillage our factories, plunder our communities, and steal our most precious secrets.  And I’ve stopped it largely, but I’ve stopped it.

Indeed, Biden expressed more fawning praise about China on an ordinary day than about America on the Fourth of July.  The last Independence Day, Biden attacked the United States and said we had, quote, ‘never lived up to’ the ideals of our fathers, our forefathers, or our Founding Fathers — those founding ideals. And yet, he enthusiastically stated that China is a ‘great nation’ and we should hope for its ‘continued expansion.’

Now Joe Biden is pushing a platform that would demolish the U.S. economy — totally demolish it… Last week, Joe Biden released his unity platform, developed with socialist Bernie Sanders, describing what he would do if elected President.   And these are actual key elements of the Biden-Sanders unity platform:

End all travel bans, including from jihadist regions.  Grant mass amnesty.  Everybody gets amnesty.  Mass amnesty.  Think of that.  Create a roadmap to citizenship for massive, massive numbers. Vastly expand low-skilled immigration to the United States. Increase refugee admissions by 700 percent.

This is Biden.  Biden has gone radical left. So there’s never been a time when two candidates were so different.”

Those differences are so deeply profound that I want to bring your attention back to the President’s Executive Order on Building and Rebuilding Monuments to American Heroes issued on July 3.  In section (c) (iii), among those he specifies that statues should be built of “historically significant Americans,” he includes “opponents of national socialism or international socialism.”

Recall all your life you’ve heard the canard that Communists are on the Left and Nazis/Fascists are on the Right.  President Trump understands their equivalence, that Communists, Marxists, Fascists, and Nazis all are Anti-Capitalist advocates of state control over each of us.  The only difference is Nazis and Fascists are national socialists based on race (“Aryan” Germans for Hitler), while Marxists and Communists are international socialists based on class (workers, proletariat no matter the borders).

Recall that in one of the most heroic speeches in American presidential history, President Trump at Moun Rushmore  on July 3 denounced “far-left fascism”:

“In our schools, our newsrooms, even our corporate boardrooms, there is a new far-left fascism that demands absolute allegiance.  If you do not speak its language, perform its rituals, recite its mantras, and follow its commandments, then you will be censored, banished, blacklisted, persecuted, and punished.  It’s not going to happen to us.  (Applause.)

Make no mistake: this left-wing cultural revolution is designed to overthrow the American Revolution.  In so doing, they would destroy the very civilization that rescued billions from poverty, disease, violence, and hunger, and that lifted humanity to new heights of achievement, discovery, and progress.”

This touches to the point, exposes what the Left what most desperately fears being exposed – that they are as evil as, the same as, Nazis and Fascists.  Ultimately, this is the source of their soul-deep visceral hatred and fear of him.  And why he is such a towering hero to you and me.

We are in a true existential moment for our country.  This is do or die for real.  Let’s do for America so it does not die.