The gap between Decency and Darkness came into sharper focus than ever this week.

Last Friday night, Fourth of July Eve (and after the HFR was posted), at Mount Rushmore our President Trump spoke directly to the heart of every patriotic American.

TTP had both the full video and text up the next morning (7/04) of his magnificent speech: July 4, 1776 – The Most Important Day in the History of Nations.

After the speech came the celebratory fireworks show above Rushmore that you see above.

Hume applied his acerbic observation not just to Duckworth but to her party and all its media propagandists:

“The President’s speech was a full-throated defense of America’s history and heroes… I don’t think I’ve ever seen such dishonest and biased coverage of any event.”

As the week progressed, the gap between Light and Dark, Good and Evil, Freedom and Fascism, Prosperity and Impoverishment continued to widen and deepen.

In response to the President’s Love America on the Fourth address, his senile pedophilic corruptocrat Dem opponent responded with a Hate America-on-the-Fourth 90 second screed condemning “200 years of systemic racism.”

“So what’s their plan? Well, in a sentence, they’d like to make the rest of America very much like our biggest cities have become — squalid, dangerous, chaotic and unhappy. They’d like to do to your neighborhood what they have done to New York City.

The Federal Reserve will be used to fix the ‘racial wage gap.’ Central bankers will be encouraged to decide if you’re being paid too much based on your skin color.

One thing the Biden administration won’t enforce is immigration law.  It promises a moratorium on deportations (even for convicted criminals), unlimited immigration with virtually no border controls, and citizenship and voting rights for all illegal immigrants currently living in this country.

That means 22 million brand-new voters spread out across 50 states, the vast majority of whom will faithfully vote for the Democrat Party.”

That’s just a peek at a hint of a glimpse of the wholesale horror politically, socially, culturally, and economically the Democrats intend to wreak upon our America.

As POTUS correctly notes what a Biden Presidency would be:

True, but just who would?  You’d think it would be Soros, the UN, and the Global Elite.  Perhaps, but there’s a growing realization of the specific person planning to call Senile Joe’s shots.

…Jill Biden dedicated her 2019 book of smothering treacle Where the Light Enters: Building a Family, Discovering Myself to: “The inspiring, groundbreaking First Lady Edith Wilson.”

In October 1919, President Woodrow Wilson suffered an incapacitating stroke leaving him partially paralyzed and bedridden.  His wife of only four years and almost no education, Edith, hid his condition from the public via a compliant press, and became the de facto president until 1921.

You can read the book about it, Madam President: The Secret Presidency of Edith Wilson, by William Hazelgrove.

For this entire year as Slow Joe’s mental capacities continued to deteriorate in public, many began to wonder how his wife Jill could allow him to continue, as it was considered “elder abuse” for her to do so.  The wonder is no more.

Which is why yesterday (7/09), Steve Kruiser at PJ Media penned: Jill Biden Is the Real Democrat Running for President – She’s Willing to Trash Her Husband’s Dignity to Be Edith Wilson 2.0.

Meaning you can bet your sweet bippy that Jill will decide who Woodrow Joe’s running mate will be — some brainless woman like Tammy Duckworth no threat to her who she can leash with ease.

So, yes… George Soros and Global Elite puppet UN Secretary-General Antonio Guterres will get their wish for “One Supreme Body of Global Governance” with Biden.  Jill Biden, that is.

In the meantime, Keep talking, Joe!

Let’s compare Dem fascist lunacy to what POTUS is doing now.  From today: 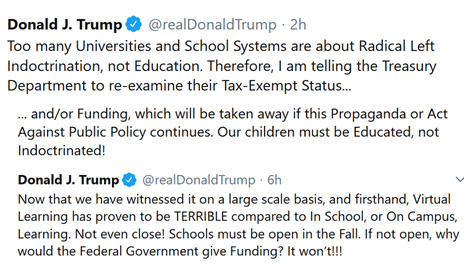 From yesterday (7/09) on the South Lawn, the President spoke on and signed his Executive Order on the White House Hispanic Prosperity Initiative (link is the EO full text).

As a codicil to the above, and noting that it is to operated by the Department of Education, I will be encouraging Secretary Betsy DeVos (who, by the way is the sister of Erik Prince of Blackwater fame) to consider massively shifting DOE funding away from colleges producing an overabundance of jobless kids with useless degrees in useless majors like gender studies, to vocational schools training Hispanics and any other young person in skills like welding, plumbing, roofing and wiring up a home that are in real demand and pay lots of money.

At the South Lawn presentation was Robert Unanue, CEO of Goya Foods.  It is a multi-billion-dollar company with thousands of employees built from scratch by his grandfather that all Hispanics – and millions of others – know about.  Goya products are a staple of Hispanic-American cuisine.

Bob Unanue (oo-nan-oo-way) is an inspiring patriot who praised America as “the greatest country in the world,” and personally thanked the POTUS, saying “We are all truly blessed to have a leader like President Trump.”

Of course, this created instant outrage among the Cancel Culture Woketard Fascists who organized a boycott of Goya.  This morning (7/10), on Fox and Friends, Unanue refused to apologize and said he will never backdown in the face of the “suppression of speech” by boycotters.

The boycott will fail as Hispanics all over the country will laugh at it.  Nonetheless, introduce yourself to all the cool recipes they offer with their products.  Buy Goya Online!

Robert Unanue is the American HFR Hero of the Week.

Now read the amazing story of Li-Meng Yan, the Hong Kong virologist who knows all about China’s early research of Covid-19 and how it was hidden on purpose.  It’s on Fox News today (7/10): Chinese virologist accuses Beijing of coronavirus cover-up, flees Hong Kong: ‘I know how they treat whistleblowers’.

“The reason I came to the U.S. is because I deliver the message of the truth of COVID,” she told Fox News from an undisclosed location.  Read the whole story.  You’ll quickly see why Li-Meng Yan is the Foreign HFR Hero of the Week.

No wonder POTUS is hopping mad at the three Turncoat Justices – Roberts, along with, unbelievably Gorsuch and Kavanaugh – delivering an asininely political decision against him in Trump v. Vance, allowing New York Dems to continue their witch hunt for his tax returns and financial records. 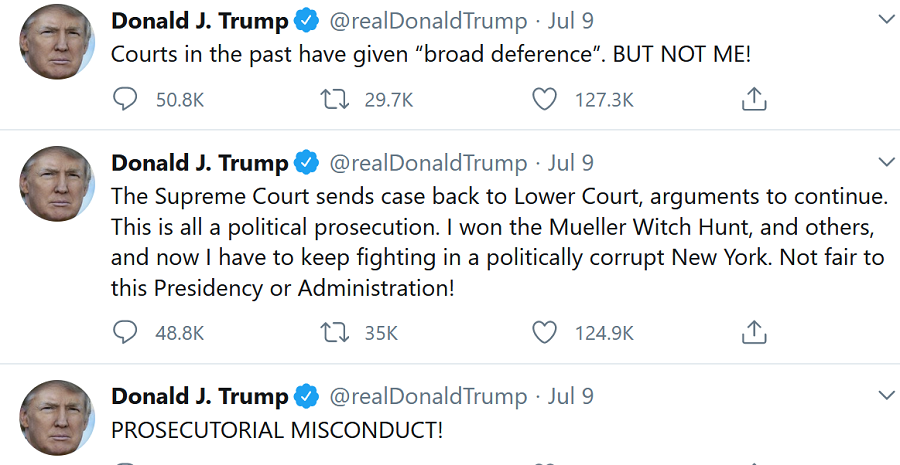 However, realize there is no immediate harm.  It was remanded back to lower courts, there are all kinds of legal escape hatches his lawyers will activate, delays will continue beyond the election and may die out all together.

Realize also that now any district attorney or state attorney general – say in a solid Red State like South Dakota – can impanel a grand jury to subpoena the financial records and tax returns of any federal public official – say, Justices Roberts or Gorsuch, or Speaker Pelosi.  It’s open sesame on the swine.

Know a DA who’s one of us with guts?  Talk to him.  If New York Dems can do this to the POTUS, well, he and a grand jury of his making can do the same to Obama, Bill & Hillary, and John Brennan.  One way he (or she) can become instantly famous.

Another way to make the swine nervous is to keep G-Max alive and not Epsteined.  She’s got the goods on QEII’s second son: Prince Andrew’s Cousin Says Ghislaine Maxwell Has “Secret Video” Of Him.

She also may have the video goods on everyone on this list – that also includes Israel’s Ehud Barak, New Mexico’s Bill Richardson, and of course, Billy Goat Clinton.  Plenty of others too – funny how so many are rich Democrats.

The must-read is Conservative Treehouse’s List of Reasons Why China Virus Hype Is Essential to Dems (and how stats are being manipulated).

Then ZeroHedge yesterday (7/09) has a fascinating connection between the Chicom Virus lockdowns scam and the Global Warming scam both failing now in the pubic eye.  It’s because they are both based on GIGO computer modelling – garbage in/garbage out on purpose.

Public awareness came with Michael Moore’s documentary Planet of Humans which completely destroyed the received green wisdom regarding stalwart solutions for ‘green’ energy being touted by environmental activists over the last 30 years.  Yes, that Michael Moore, strange but true.

ZeroHedge explains this in another must-read of the week, 2020 – A Rough Year for Greta.

California’s Dem Tyrant Governor, Gavin “Gruesome” Newsom ordered anything fun closed and shut down on the July 4th weekend — beaches, bars, restaurants and museums – using the excuse of a “surge in Coronavirus cases.”  And of course he banned fireworks.

Here’s how the folks in Los Angeles responded to firing off “illegal” fireworks last Saturday night the 4th.  Every one you see is “illegal.”  The video was taken by a drone over LA looking west.  There is hope for California is such mass rejection of tyranny.

It might even be harbinger of hope for such a rejection in all America this November.