Welcome to the HAPPY FOURTH OF JULY HFR!

The largest monthly jobs increase in US history was announced yesterday (7/02) for June.  No wonder POTUS is celebrating: 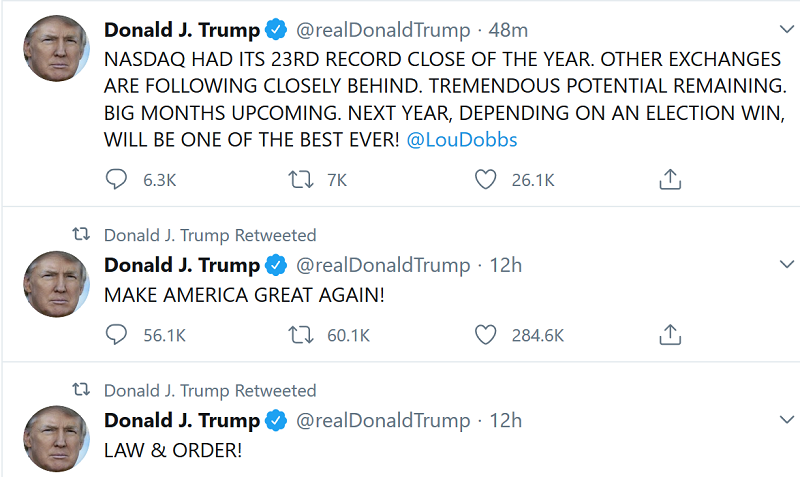 We should celebrate too, not only this great V-shaped recovery news, but also tomorrow’s 244th anniversary of our extraordinary country’s birth.  Let’s start right now.

On April 11, the Opening Day of Major League Baseball in 1994, the Texas Rangers had the world’s most famous classical pianist, Van Cliburn (who grew up in Fort Worth) perform the Star-Spangled Banner.  Be thrilled, have a tissue for your tears, and reflect on those days of decency years ago.

Twenty-six years ago, no one could have imagined the nightmarish insane horror unleashed upon our country by those of the Left consumed with hate towards it.  You and I know there is only one way in the known universe to end this nightmare and have our decent normal America once again – the reelection of President Trump, retaining the Senate, and gaining the House this November.

The forces aligned against this are global.  They even have a diabolical name for it:  The Great Reset.  And a start date that just happens to coincide with when they expect a Commiecrat government to be installed in the White House: January 2021.

On June 3rd, Klaus Schwab, Founder and Chairman of the World Economic Forum – members of which are the Globalists Who’s Who – announced that the Covid Crisis necessitates a “Great Reset of Capitalism” worldwide.

“COVID-19 lockdowns may be gradually easing, but anxiety about the world’s social and economic prospects is only intensifying. There is good reason to worry: a sharp economic downturn has already begun, and we could be facing the worst depression since the 1930s. But, while this outcome is likely, it is not unavoidable.

To achieve a better outcome, the world must act jointly and swiftly to revamp all aspects of our societies and economies, from education to social contracts and working conditions. Every country, from the United States to China, must participate, and every industry, from oil and gas to tech, must be transformed. In short, we need a ‘Great Reset’ of capitalism.”

In other words, a UN-global corporatist-Chicom takeover of the entire world’s economy.  Speakers who spoke at the meeting in Davos, Switzerland (present or virtual) in enthusiastic agreement with Schwab’s Great Reset included:

Every single participant was in agreement that the Great Reset of Capitalism was urgently required by the two great crises of our day:  the Covid Crisis and the Climate Change Crisis.  Both of which, in Schwab’s words, “require a global social contract centered on social justice.”

One of them, Amazon’s Jeff Bezos, showed how committed he is to the agenda by renaming Seattle’s NHL Key Arena to “Climate Pledge Arena.”

A summary of the Global Elite’s plan to impose the Left’s Green New Deal and UN World Government upon us is provided by Global Research: The Davos Great Reset.

There is only one fly in their ointment, one single man stands in their way, one Lone Warrior, one Horatio at America’s Bridge.

They are doing and will do everything they can to ensure his defeat in November.  For if they fail and his presidency continues, they can kiss their Great Reset goodbye.

Thus we can expect a shock-and-awe barrage of October Surprises starting after Labor Day (Sept. 7) designed to ruin POTUS’ chances of reelection.  Dorsey will ban him from Twitter, as will Zuck from Facebook and Google from YouTube.  Every dirty trick, every made-up invented filthy scandal imaginable will megaphoned to the Moon by the Fascist Media as true.  Cheat-by-Vote and every other voter fraud scam possible will be massively organized nation-wide.

Whatever the outcome on November 3rd, expect a semi-tractor trailer truckload of legal challenges in a dozen, two dozen, three dozen states.  Think a repeat of the 2000 Florida Hanging Chad Recount on steroids times a thousand. 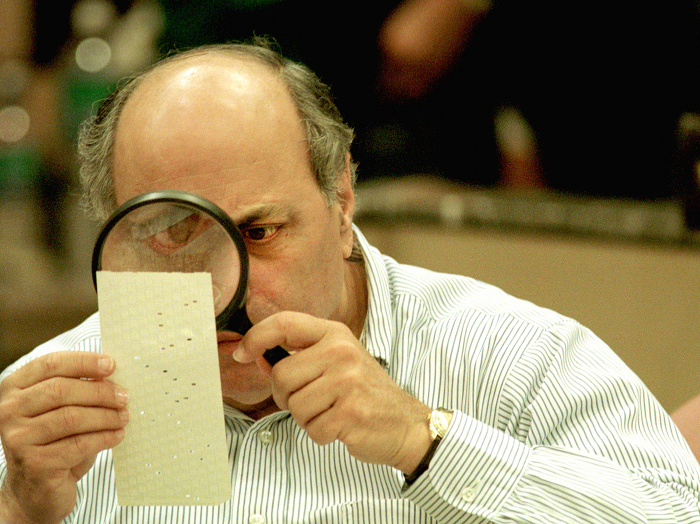 And expect violence like we’ve never seen no matter what.  BLM/Antifa animals looting and destroying way more than what’s happening now – that’s just practice – if Biden loses.  Patriots feeling they have no choice but to pick up a gun and grab the ammo box, as with their country stolen by traitors bent on destroying it, they have nothing to lose.

The bottom line is that Trump has to win no matter what.  This really is do or die for America.  The key problem is a key failing of Trump’s – he has little eye for what can go wrong and thus often never plans to head it off at the pass.

How is it possible he let Jeff Sessions and Rod Rosenstein get away with setting up the Russia Collusion Hoax?

How is it possible, after the lesson of the Dems’ ballot harvesting and other vote fraud schemes stealing the House in 2018, he didn’t start immediately to issue EO’s forcing states to comply with federal law requiring only bonafide US citizens voting in a federal election, and using the Real ID Act to implement it?

Instead he has done little except complain about it – and now it may well be too late to do anything.  So many tweets complaining about mail-in vote fraud – but what has he actually done to stop it?  All those tweets about he will declare BLM a Domestic Terrorist Organization – but no tweet at all that he has, with a photo of him posing with a signed EO sitting at the Roosevelt Desk.

HOWEVER… last night (7/02), SCOTUS in a 5-4 ruling upheld Alabama’s Photo Voter ID law (pending appeal) requiring Voter Photo ID including absentee ballots that also must include two notarized witnesses.  Pretty easy, one would think, for POTUS to apply this nationally, putting a real crimp in Cheat-by-Mail.

Plus. Often his strategic patience pays off.  Look at the BLM/Antifa terrorist takeover of downtown Seattle.  He waited for it to become intolerable for city grandees, who didn’t mind if the terrorists threatened other people and destroyed their property.

But when the terrorists found out where Mayor Durkam’s multi-million dollar home was and threatened to burn it down, within 24 hours the mayor ordered Seattle police to clean out their “autonomous zone” immediately.

Of course, the Mayor could have ordered the terrorist occupation dismantled at the outset, but let it fester.  When it threatened her personally, “defund the police” went out the window.  If she had acted when she should, this man’s son would still be alive.  This is heartbreaking.

Shortly after the broadcast on Hannity, Horace Lorenzo Anderson Sr. and his family received a phone call.  It was the President of the United States to give them solace, telling them, “Your son Horace Jr. is looking down on you and watching over you.”  They talked for seven minutes.  The Lorenzo family still has yet to receive a single call from any Seattle official including Durkam.

Such an act of kindness and humanity is a powerful reminder of how blessed we are to have such a man leading our country.  And if he is gone from the Oval Office, our country is gone with him.

The utter failure of BLM/Antifa in Seattle may well be a harbinger of their whole dog’s breakfast nationwide.  The reality is that, as Charles Love notes in What Woke Whites Don’t Understand About Blacks (7/01), most blacks are normal decent people like everyone else – it is the media that magnifies the small percent who are criminal and loud-mouth Marxist.

A heartwarming example is on Saturday (6/27): Black Americans Turn Out To Defend Lincoln Emancipation Memorial From Radical Activists.  They are far from an exception, they are the majority of blacks who feel this way, albeit their being ignored by the Fascist Media.

James Delingpole in London notes a BLM Backlash Emerging in the UK. “BLM has more to do with white Marxist revolution than it does with furthering the interests of black people,” is how one now-former BLM celebrity puts it.  Won’t be too long until this propagates across the Pond to our shores.

[Note to TTPer Kellie who lives in Prague:  how about a Forum update on life there now?]

Best of all, the GOP itself has summoned up the moxie to put out this campaign ad:  THIS IS NOT ABOUT JUSTICE – IT’S ABOUT DESTROYING AMERICA.  Watch as they link BLM Marxist terrorists to the Dems:

Then there is POTUS himself with this tantalizing peek at just how much he will soon be going on full-tilt offensive – by tweeting on Wednesday (7/01) with an intro a campaign video of his from October 20, 2016: 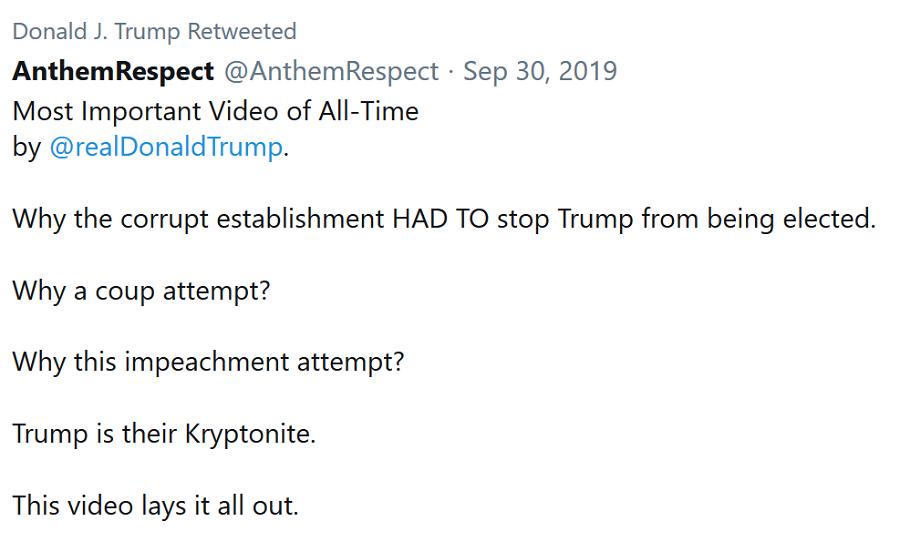 Massive rise in cases – everyone must wear a mask!  Tigers and lions and bears, oh no!  All the mass and maskless protests, plus ending the lockdowns are spreading herd immunity.  All the media blather about is more cases, never fewer ICU hospitalizations and mortality.

The Chicom-Dem-Media Virus game is quickly coming to an end.  Already has in Sweden: 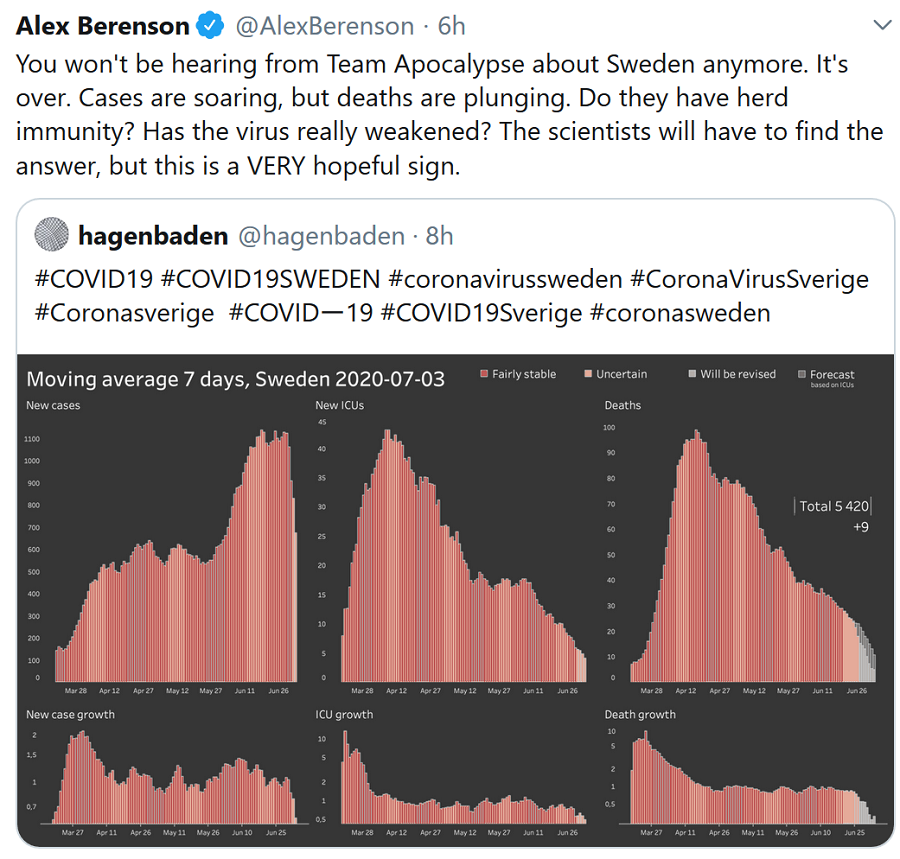 The take-away to all of this.  We have a V recovery. The Chicom Virus is departing.  BLM/Antifa terrorism’s mortal hit in Seattle means it’s losing big, and with it the Defund the Police lunacy.  SCOTUS seems close to approving a mandate for Voter Phot ID.  The Dems remain stuck with a senile pedophlic corrupt brainless empty suit.  On our side is a true larger-than-life America Hero President.

We leave the last words to TTP’s Jack Kelly:

“With so much at stake, we can’t afford to be complacent. But neither should we permit ourselves to be gaslighted into thinking all is lost. President Trump must win this election. Which he almost certainly will.”

So have a fabulous and fearless Fourth of July!  Have too much fun, drink too much beer, eat too much BBQ, go to the beach or get outside and forget Masks of Submission.  Enjoy being an American, celebrate the most moral political event in history by reading the Declaration of Independence.  Read it entire, aloud to your family and friends.

No other country in history had ever been founded on the most moral principles there are.  Be proud that they are America’s immortal inspiration to the world:

“We hold these truths to be self-evident, that all men are created equal, that they are endowed by their Creator with certain unalienable Rights, that among these are Life, Liberty and the pursuit of Happiness. — That to secure these rights, Governments are instituted among Men, deriving their just powers from the consent of the governed.”