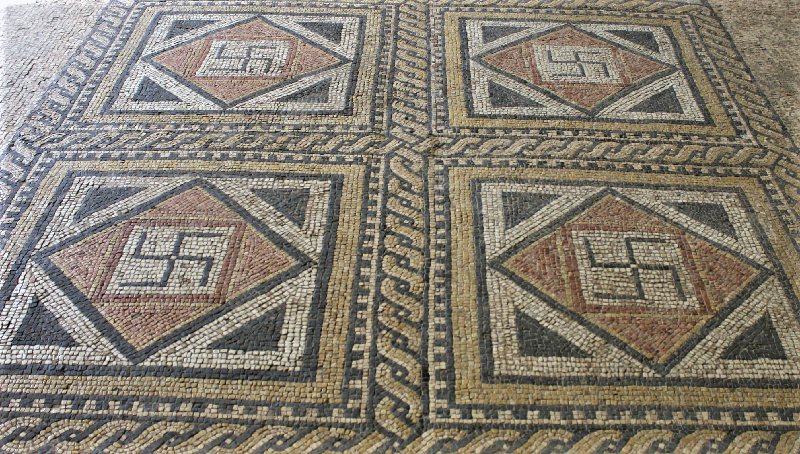 The most heinous perversion of symbolic art in world history is that of the Swastika – Sanskrit for “the goodness of existence.”  This Roman mosaic in Tarragona, Spain, is 2,000 years old, yet the Swastika is far older – carved onto mammoth ivory by Ice Age hunters in Ukraine 12,000 years ago.

Why from time immemorial has it represented eternity, prosperity, the centeredness of all that is?  Look up into the sky on a clear dark night.  All people have studied the heavens for eons.  You could always know where you were by finding North, for the two front stars of what we call the Big Dipper point to it – always.

The Greeks called it Mega Arktikos, the Great Bear – why we call Far North the Arctic today.  The ancients saw the Bear every year rotating around Celestial North – now occupied by Polaris, the North Star – through all four seasons, while all the stars in the sky circled around it every night.  What do you see in this depiction of that seasonal rotation? 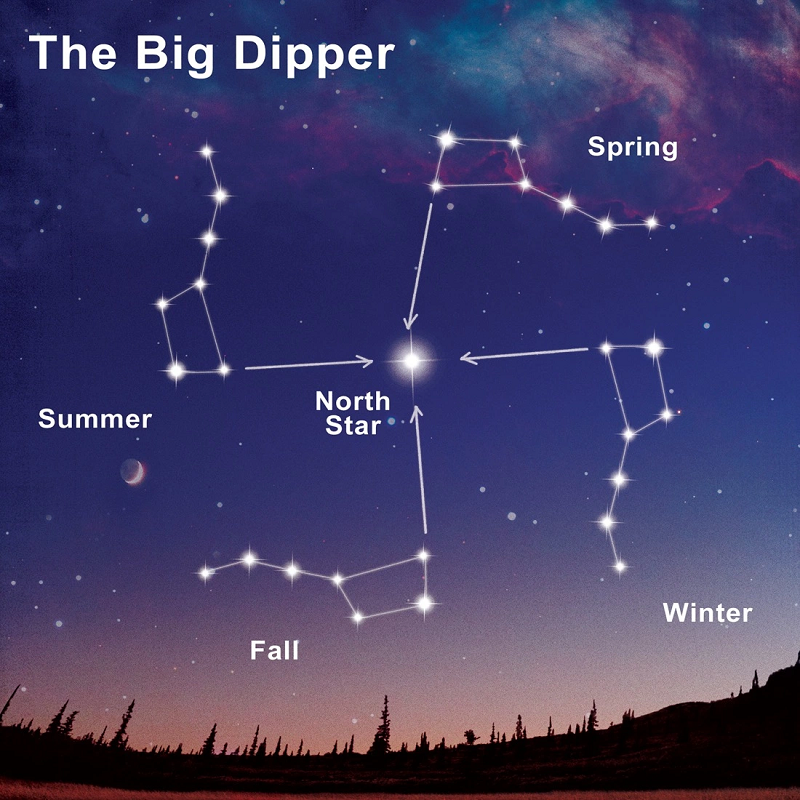 Yes, a Swastika.  You can’t get more perverse than to take the symbol for the goodness of existence used by people for a dozen millennia – and still revered by Buddhists, Hindus and many others to this day – and twist it into a symbol for genocidal mass murder.

Just as you can’t get more perverse than being from the freest country on earth founded on the most moral principles in history, and filling yourself full of Nazi hatred towards it.

There are two variations.

Black Nazis who want to commit envious genocide on Whites, in the same way Hitler ginned up genocidal envy towards Jews.

White Auto-Nazis who want to commit genocide upon themselves out of their fear of Black Nazi envy.

Which is worse, a greater threat to America?  White Auto-Nazis obviously.  They’re the ones who allow Black Nazis to commit mayhem, who grovel and kowtow to their increasingly outrageous demands.

Further, as you can see in most any photo of these protest riots, most of them are White.  Are there any Black folks here in this BLM protest?  Maybe one or two? 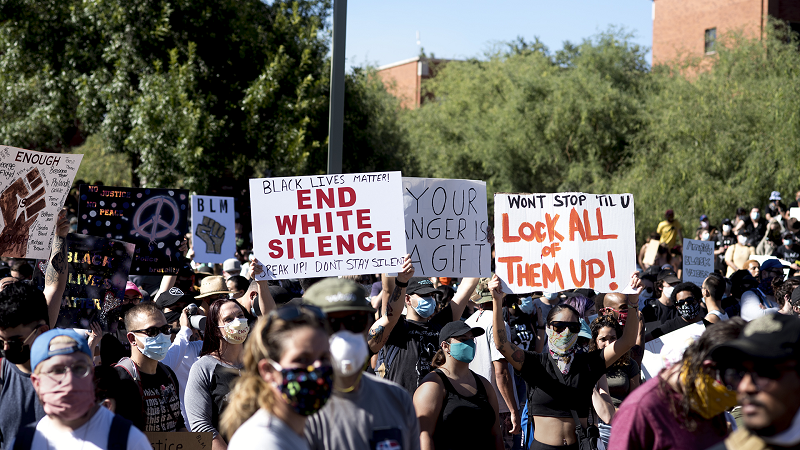 We need to have billboards up on highways saying stuff like:

ALL WHITES ARE RACIST!

IF YOU ARE WHITE AND AGREE

THEN RID THE WORLD OF ONE WHITE RACIST

OR ELSE STOP FEELING GUILTY OVER YOUR SKIN COLOR

ARE YOU A WHITE AUTO-NAZI?

THEN START WITH YOURSELF!

OR ELSE STOP HATING PEOPLE OF ANY SKIN COLOR

Meanwhile, do all you can to help this go viral: 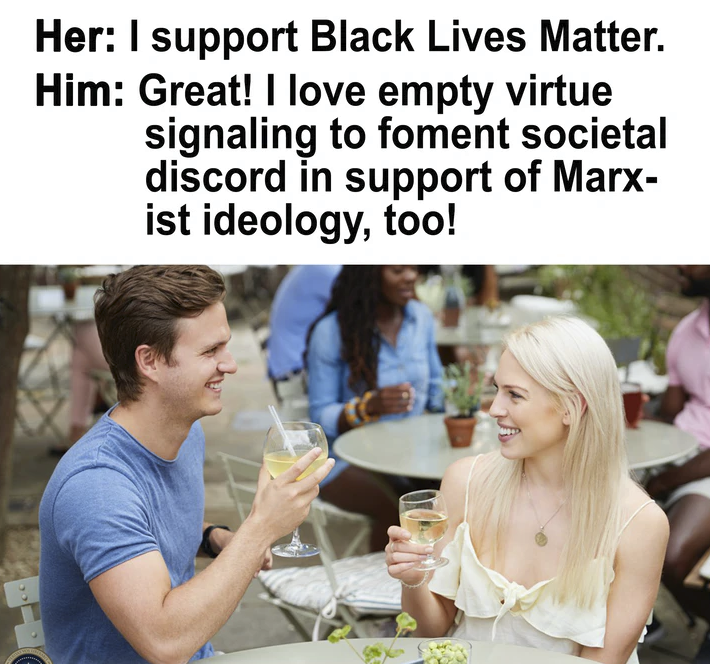 There certainly is an iron-clad argument, as TTPer Joe Katzman makes, for a kinetic response to BLM/Antifa violence, meaning whatever it takes physically to protect our historic statues from being torn down, or your home or business being burned down.

Can’t resist gloating over this White Auto-Nazi getting exactly what he deserves: Black Lives Matter Activist Loses One of His Testicles After Being Shot in the Balls with Rubber Bullets During George Floyd Riots.

But as Saul Alinsky advises, the best weapon against a movement or social phenomenon is ridicule.  Nothing infuriates Leftie-Commie-Fascists more than being laughed at.  The Left’s greatest weakness is no sense of humor.  Call it Anti-Kneeling.  Calling them Black Nazis or White Auto-Nazis is laughing at them on steroids.  It will drive them out of their minds.

Oh, and here’s the Cop of the Week.  God bless this guy. 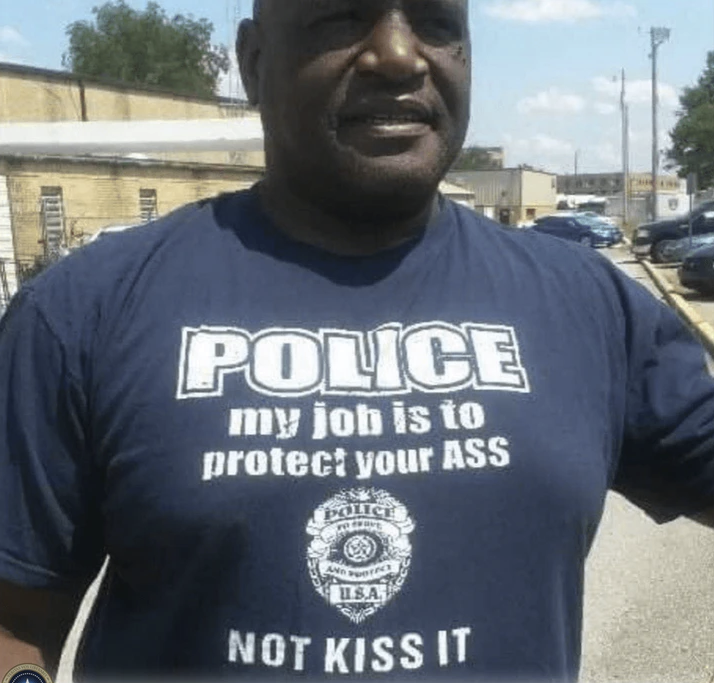 A perfect example of Fascist-tards having no sense of humor:  Kansas State Student Flooded With Death Threats Over George Floyd Joke, School Launches Investigation Into HIM.  Let’s hope this kid has the guts to tell his haters they are proto-hominids, hires a good conservative legal firm to defend him, raises money for his defense on GoFundMe, and refuses to bow down to the Mob in any way.  Realize – this is in Kansas

Let’s have some fun.  This just in: Unilever Rebrands “Fair & Lovely” Skin Whitening Cream.  ROTFLMAO!  The folks who run Unilever are White of course and so-apologetic over it.  So here’s the truth.

You see pigmentocracies all over Africa.  Ads for skin whiteners are common.  Here’s a typical one I recently saw in Togo: 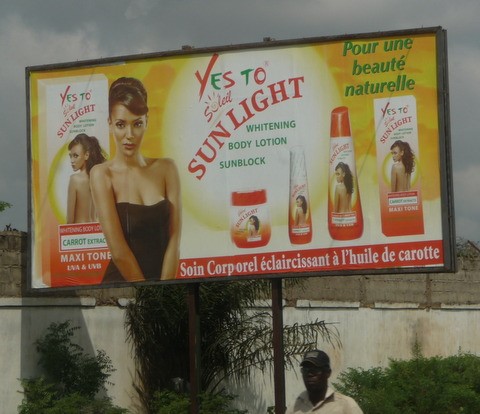 And in Asia.  Here’s one I saw in Bangladesh: 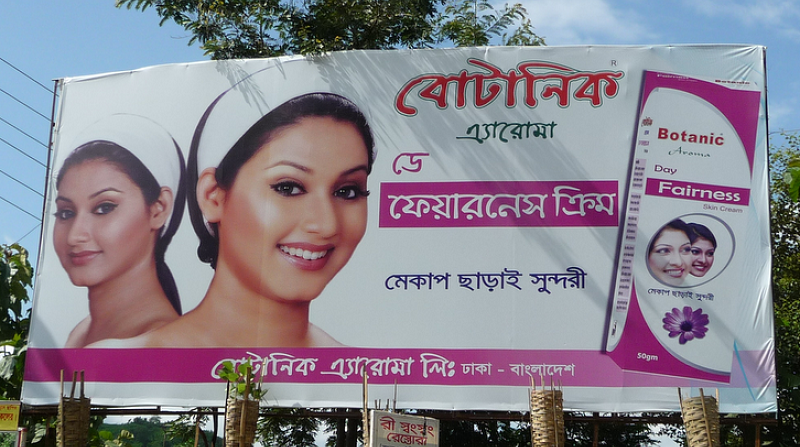 This is global, universal, world-wide.  Just look at the long list of countries Wikipedia (in the link above) lists and describes.  And absorb this Wiki quote with two sources:

“Recent research in the U.S. shows that socioeconomic and health inequality among African Americans along the color-continuum is often similar or even larger in magnitude than what exists between whites and African Americans.[6][7]”

Gives you a slight glimpse into how monumentally ignorant and uneducated leftards are about the world, doesn’t it?

He is absolutely right.  For verification, consult Alex Berenson’s latest.  He’s the go-to guy for real data.  And here’s the truth: 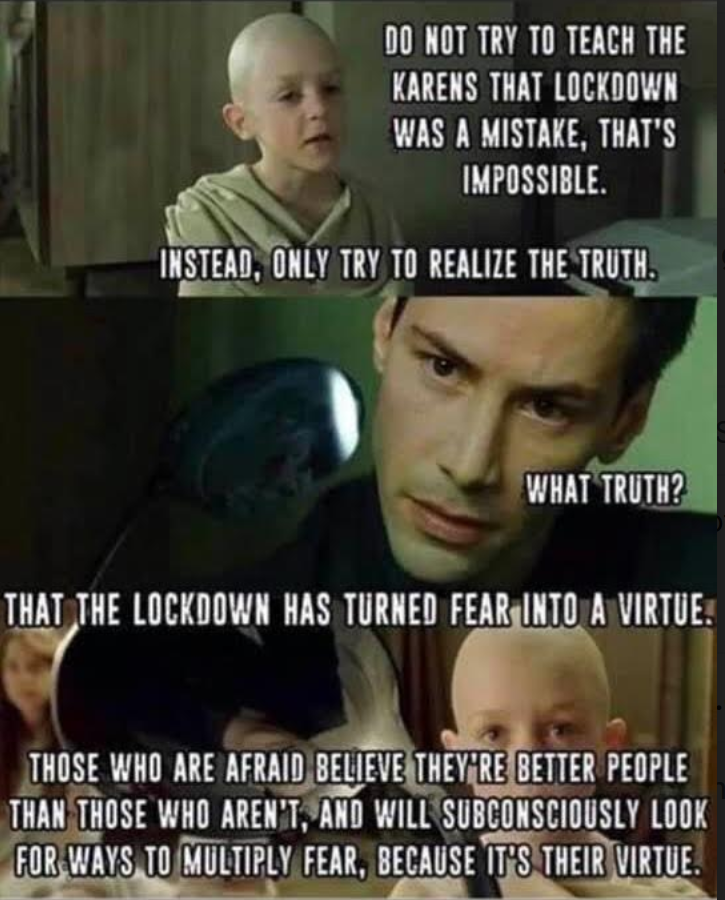 “Under the Constitution, the Equal Protection Clause allows Idaho to recognize the physiological differences between the biological sexes in athletics.  Because of these differences, the Fairness Act’s limiting of certain athletic teams to biological females provides equal protection.

This limitation is based on the same exact interest that allows the creation of sex-specific athletic teams in the first place — namely, the goal of ensuring that biological females have equal athletic opportunities.  Single-sex athletics is rooted in the reality of biological differences between the sexes and should stay rooted in objective biological fact. Allowing biological males to compete in all-female sports is fundamentally unfair to female athletes.”

Wow, is that a stick-it-up-your nose to Phony Originalist Gorsuch or what?

By the way, TTPer Doug Kemp on the Forum was perspicacious enough to note what this POTUS tweet means:

That is, the DACA program was created not by Congress passing a law, but by an overtly unconstitutional Executive Order of Obama’s in 2012.  In upholding the President’s authority to issue an illegal EO, the Roberts Court gives Trump the authority to issue any EO he wants, illegal or not.

You mean, it’s illegal for me to issue an EO declaring Antifa a domestic terrorist group as the law only applies to foreign ones?  Sorry says the Prez, the DACA ruling says I can!  We can’t wait to see when he drops this hammer.

Speaking of EO’s, try this on from yesterday (6/25): Trump executive order directs feds to prioritize skills over college degrees in hiring.

Turns out the majority of those White Auto-Nazis protesting for BLM/Antifa are college or college-educated snowflakes.  These are just the people to shaft now, as Skye points out, referring to mathematical historian Peter Turchin’s Ages of Discord: A Structural-Demographic Analysis of American History.

“Ages Of Discord makes a major point of an over-production of Elites who then fight each other for their share of the loot, and how this leads to an age of discord.  Turchin points out that college graduates have been massively overproduced in America now, and that imported foreign college grads have made the competition for their jobs even more severe.  The left is inevitably eating itself. Trump’s EO will surely accelerate this.  His timing is perfect.”

When I was a young kid, my hero was Tarzan.  I devoured every novel about him by Edgar Rice Burroughs.  I never forgot a warning throughout his books, about what he called “The thin veneer of civilization.”  We are seeing that thin veneer vanish before our eyes in city after city run by Democrat political machines.

Skye and I agree in POTUS’ strategy of letting uncivilized savages ruin Dem-run cities, letting them stew in their own juices.  However, we both realize that should things get really out of hand with unbearable savagery, POTUS knows that the Posse Comitatus Act applies only to the Army.

The US Navy and thus the Marines are exempt from it, and their Commander-in-Chief can override any DOD regulation to the contrary.  Meaning he can send in SEAL Team Six any time to quickly clean up the infestation of what he calls SPAZ – the Seattle Protected Autonomous Zone.  Won’t take them long.  Be sure to aim those rubber bullets at the ‘nads, guys.

Time for an international news break.  TTPer Edd alerted the HFR to this.  We all know by now that the Chicoms fomented their virus upon America and the world on purpose.  What may happen now may be a karmic hit upon them that could be unrecoverable.

The world’s biggest dam is the Three Gorges Dam on China’s lifeblood of the Yangtze River.  The worst flooding in many decades is happening now, and everyone knows the dam was built shoddily with lousy cement and rebar by corrupt local contractors who bribed local officials to build it.

Thus stories like this on Tuesday (6/23) are appearing: As many as 400 million lives may be at risk as torrential rain in China threatens the world’s largest dam.

We certainly cannot wish this horror upon our fellow human beings.  But given how corrupt the Chicoms are, the dam may really be in danger of collapse.  And if it does, the torrent may sweep the Chicoms away.  Watch:

Before we close, here’s a plea, warning, and request.  Next Friday, July 3, President Trump will deliver an address and hold a July 4 Independence Day ceremony at Mount Rushmore.

As Black Nazis and White Auto-Nazis are promising mass disruption, violence, and attempts at damaging the monument itself, I could not more encourage any TTPers who are able to be there to protect and defend Mount Rushmore.

If there is a place to take a stand against the Hate America Fascists who wish to destroy our country, Mount Rushmore on July 3rd is that place.

We close with this news.  This morning (6/26), the London Daily Mail ran a story about an adventure of mine long ago:

‘It was as if we were aliens from outer space’: Explorer unearths photos of the moment he met an isolated tribe in the Amazonian jungle that had never made contact with the outside world before

I hope you enjoy it!  I was 28 back in 1972, and I’m still going strong.  I so appreciate all the kind messages I’ve received from so many TTPers expressing their desire to join me on a life-memorable Wheeler Expedition.

What’s coming up right around the corner is our Africa Dream Safari.  You’ve seen this photo in the TTP left side bar, right? 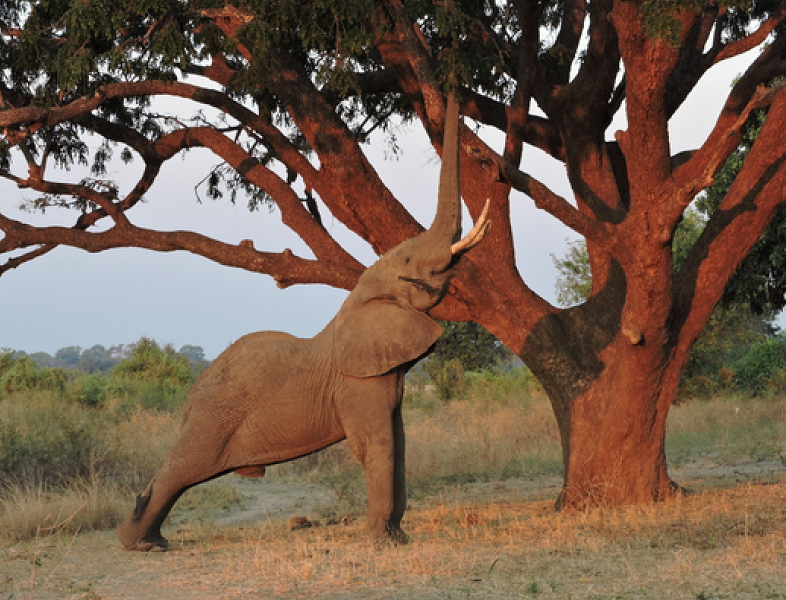 It’s one of the many amazing photos I was able to take – and an example of those you’ll be able to take as well.

Everyone with adventure in their soul dreams of experiencing a top shelf first class dream safari in Africa.  This is it.  Now’s your chance of a lifetime.  Don’t pass it up.  Click on Africa Dream Safari, get all the info, let me know whatever you’d like to discuss about it, then decide to be with me for your Africa dream.

Before you know it, you’ll be having a gin-and-tonic sundowner watching the Africa sunset of your life on the Luangwa River with me.  No delays, no “someday.”  Carpe diem. 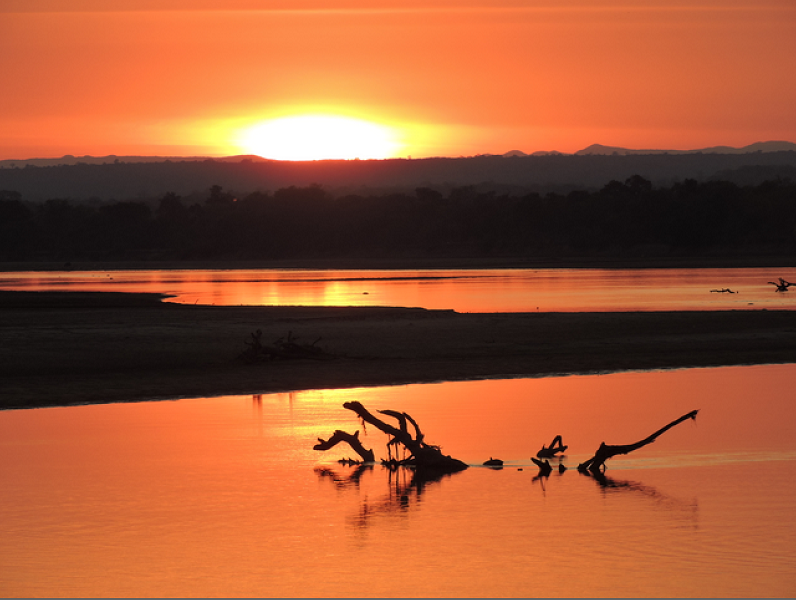