This was during a White House press briefing yesterday (6/24).  At 4:37am this morning (6/25), Newsweek reported Biden Whispering Video Viewed Over 3 Million Times.

Instantly, all over the Internet the Man from De Mentia has a new nickname: Creepy.  Twitter is reporting #creepyjoe is trending worldwide. Google Biden+creepy+whisper and you’ll get over 800,000 hits and climbing.

Mind you, this was on top of his getting confused the day before (6/23) on gun control, and ended up essentially threatening people opposed to him with “F-15s and nuclear weapons”:

Zhou Xiden is getting to be such a joke now that even late-night libtard Jimmy Kimmel made fun of him last night, ridiculing Creepy Joe’s whisper as his “sex voice – you know, the voice he uses before he starts sniffing a little girl’s hair” 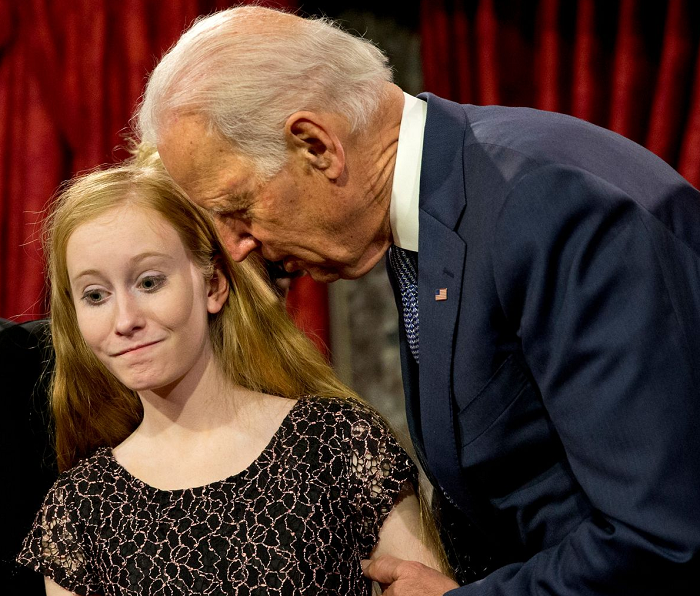 Okay, I referenced Google above to show how creepy this senile pervert has become even there. But to really research something, you go to DDG.  So, now let’s do a search there for NSA+FBI+FOIA.

Scroll through the first page entries and you’ll get:

NSA goes to war with FBI over illegal spying on Americans

Did the NSA Just Throw the FBI Under the Bus?

What’s going on here?  Listen to Dinesh D’Souza explain why “the FBI is the greatest domestic terrorist threat in America today,” noting that “thugs with badges are far more dangerous than thugs on the street.”

There seem to be actual patriots within the NSA who recognize the grave danger a corrupt weaponized-for-the-Left FBI has become to our country.  The NSA has vastly greater intel than the FBI or any other agency in the US.  They are releasing over one million pages of data on FBI illegal spying on Americans.

If these guys decide to be the FBI’s coffin hucklebearers (what “I’ll be your huckleberry” means), they will bury it six feet under.  Which means the whole Dem/FBI Jan 6 Insurrection Hoax is buried with it.

Let’s add this into the mix.  Emerald Robinson is the Newsmax White House Correspondent.  She tweeted: 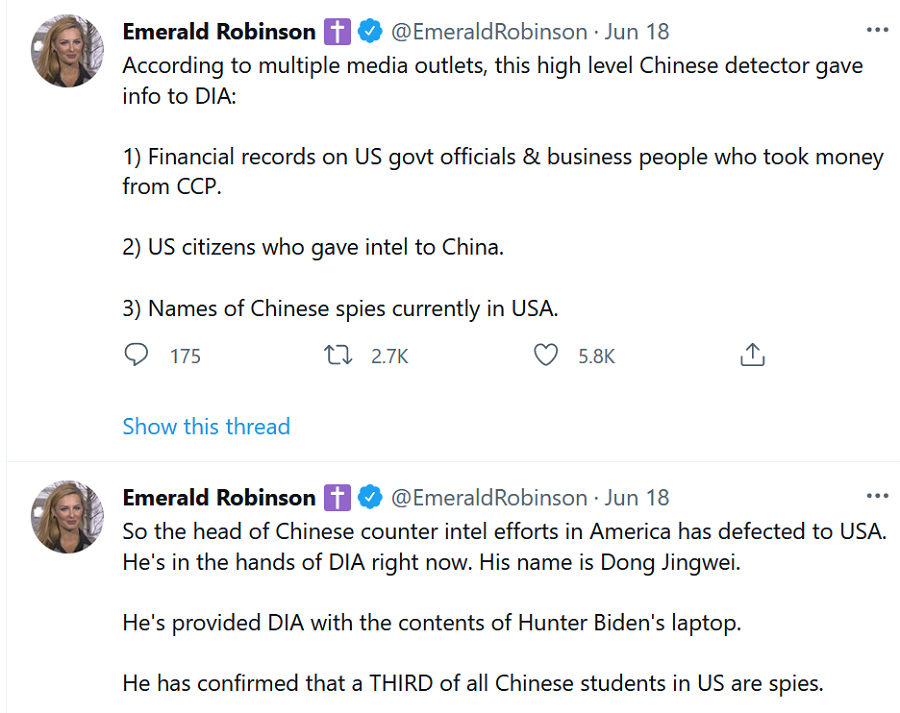 So far, nothing has been confirmed about this.  The most important factoid if true is that he defected to the DIA, which has not shared anything about him with those whom the DIA guys know not to trust – Milley and the Pentagon Brass, CIA, DNI, State – while they run what Dong is telling them by who they can trust, friends at the NSA.

This also tells you Dong knows what he’s doing by going to the DIA.  All the other outfits above would never let his info see any light of day – like what US government officials and media leaders are on the Chicom payroll.  He knew that.  Which lends credence to the rumor – but so far, it still is only that.

One reason to really hope Dong is really in the DIA’s hands is what he can reveal on Chicom plans to use Huawei to wage cyberwar on the US.  An enormous amount of Internet communications equipment throughout the US is made by Huawei, which is strongly suspected of installing kill switches within it as demanded by the Chicom PLA military.

Say China invades Taiwan – a possibility rapidly nearing certainty now – and Xi orders Huawei to activate the kill switches.  Banking is done on the open internet now, so all bank-to-bank, stock trades, credit card purchases are shut down – as are gas/oil pipelines, energy grids, and so much more.  Everyone on social media is disconnected and isolated.  On and on.

If Dong is real, as head of China Counterintelligence, he would know all about this, and could tell the DIA how to prevent it.  Huawei makes very good equipment at prices that are subsidized by the Chicom military so can’t be beat – so we bought it to run much of our Internet.

Xi is Sauron, Communist China is the enemy of all humanity and especially us Americans.  If Dong is real and exposes him, enabling the DIA/NSA to bring Xi and the CCP threat down, he would be a hero of the ages.  Pray the rumor is true.

Again, if true, Dong going to the DIA who would keep him strictly to themselves was prescient.  He knew how mentally defective the US military leadership had become, starting with the Chairman of the Joint Chiefs, Army Four Star Mark Milley.

From Breitbart today (6/25): General Insists Military’s Not Woke, Just Wants to Study ‘White Rage’.  Yeah, right.  A schmuck-putz who’s nothing more than another sophomoric social justice warrior, the total complete antithesis of an actual warrior, runs our military.  You have to wonder if he’s on Dong’s list of the Chicom payroll.

That would be Indiana’s Jim Banks advising his colleagues:

“Lean into the culture war. Because the backlash against Critical Race Theory is real. According to polling for the Heritage Foundation…79 percent of those polled agree with Republicans and never want children taught their destiny and inherent value depends on their skin color and want American schools to be teaching children about the American Dream.

Only a tiny fraction — 16 percent — want children taught Critical Race Theory. We are in a culture war. On one side, Republicans are working to renew American patriotism and rebuild our country. On the other, Democrats have embraced and given platform to a radical element who want to tear America down. Here’s the good news: We are winning.”

The key word in Banks’ message is backlash.

Yes, there’s an enormous and growing backlash all over the country against teaching Marxist racial hatred, aka CRT, to our children – typified by the Loudon County protest on Tuesday (6/22).

The backlash emerging is vastly larger than that.  This is epitomized by the NSA vs. FBI dukeout.  There is no Unitary Deep State.  There are many centers of power in the federal government, and there is a big struggle coming about among them for power.

Most of it is gang warfare, no one to root for, just enjoy watching them tear each other apart.  But there are some to root for, like the NSA.

It’s interesting that POTUS seems about to enter the fray and energize the backlash coming against Big Tech.  This morning (6/25) he was interviewed by Ric Grenell on Newsmax TV, announcing, “Watch what I do to Big Tech this coming week.”  We all can hardly wait.

There is a yuge backlash against the Democrat media. This report yesterday (6/24): America Ranks Dead Last Among 46 Countries in Media Trust.

We’ve reached Peak College, with applications to attend college “education” scams dropping off a cliff.  We’ve lost respect for government science with Fauci ruining it over Wuhan.  We know horrific inflation is coming and the Dems can’t/won’t do anything to stop it.

Everything the Dem-run government does now will be wrong in a cascade of backlash as trust in Washington evaporates.  At least 30% of Democrat voters think or suspect their party stole the presidency last November.

The Dems in DC and Woke Ruling Elite in all our institutions have Lost the Mandate of Heaven, to use the ancient Chinese adage.

What happens now?  The future is indeterminate.  Each of us can do what we can to oppose Dem-Ruling Elite Woke Fascism.  But in large part, it will be determined by patriot governors like DeSantis and Abbott, and GOP state legislatures invoking their 10th Amendment rights.

And by one man most of all, whom we pray will become Speaker Trump.

There’s the familiar analogy of a frog being slowly boiled to death – or if the water heats up too fast, jumps out of the pot in time.  What’s going on now is the Dems and Ruling Elite have heated up too many pots too fast, with frogs jumping out of them all over the place.

TTP will be here to help make sense of all this, and help retain our sanity in the midst of the chaos.  As you know, I think one of TTP’s principal values is TTPers themselves, whose wisdom and insights we witness every day on the Forum.

Which brings me to TTP’s resident Zen master, Yasuhiko Kimura.

Yasuhiko periodically offers online philosophy courses on his website GenkuWorld.  Next month, he’ll be teaching a course that I think could be of significant value to TTPers.  It’s entitled Mastering Inner and Outer Freedom.

It’s worth your consideration, and I’m sure Yasuhiko will be happy to answer what questions you may have on the Forum.  Now that should be a lively discussion!

So we close this HFR with a call to remember Jim Banks words, We are winning.  The frogs are jumping out of the pots.  The Freedom Backlash is happening.