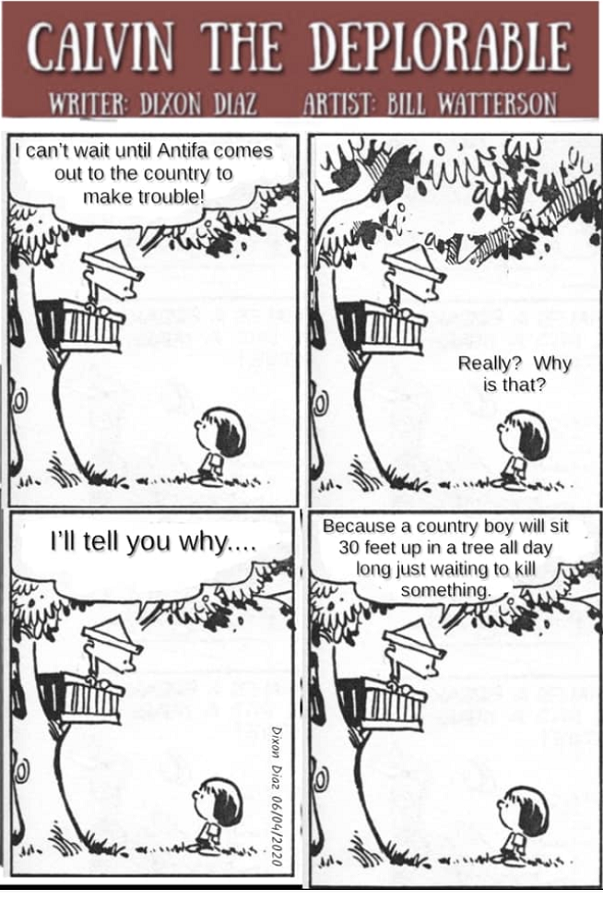 Juneteenth, schmoonteenth.  The only solace for a week as ghastly as this is comic relief.

You may have noticed that TTP has become a big fan of “Calvin the Deplorable” cartoon series by Dixon Diaz.  Self-described as a thirty-something Born Again Cuban-American “snarky conservative,” his satire is gut-punch seriously hilarious. Try this: 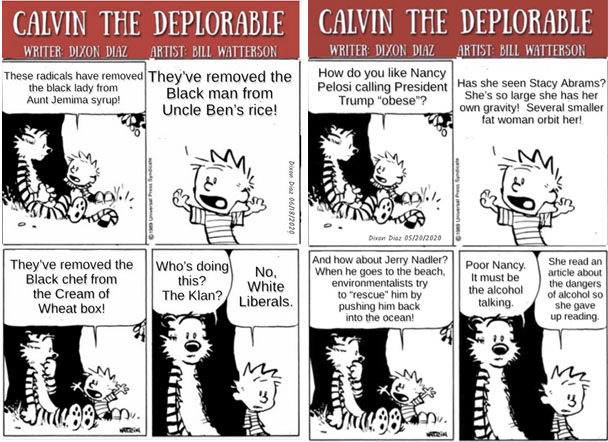 Better be prepared for this one: 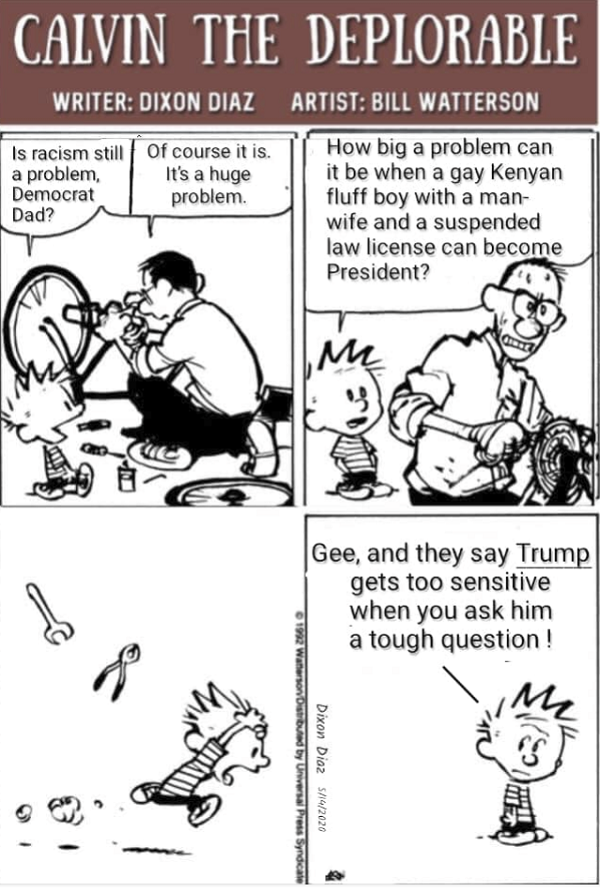 Two hours after tweeting the “Racist Baby” CNN spoof, POTUS brought it home so powerfully it brings tears of grief and hope for our country:

Yet this was a week that grief for what has happened to America is washing over any hope for her.  Take this heartbreaking story (6/14): Teen Who Makes Teddy Bears for Children of Fallen Police Officers Receives Death Threats for Her Kindness to Police.

This is but one example of so many overwhelming us now that makes it clear:  November 3rd is no longer a choice between Republican and Democrat.  It is a choice between Decency and Depravity, Freedom and Slavery, Civilization and Savagery.  A future or no future at all.

The mortal problem is we cannot wait until Nov 3 to make the choice, for if it goes wrong it will be too late.  The only option – only – if the Dems win will be armed – armed with real guns and real bullets – rebellion that our own revered military will have no choice but to suppress.

So the only choice will be to submit to Democrat Fascism or escape – but escape to where?  Places that are havens now like Wyoming or rural Nevada quickly won’t be when the whole country and its economy go down the toilet.  The entire country will be unbearable.

Some other country?  The world economy depends on America’s – no latter, no former.  Plus every nation on the globe will have to submit to being Chicom China’s puppet – including the USA.

Bottom line is, we have to start fighting back now, way before Nov 3.  But how and where?  Trump can have a turnout far bigger than any BLM/Antifa protest – he and his campaign report close to a million requests to attend his rally tomorrow (6/20) in Tulsa.

Further, he is warning:

Well, okay!  How about, Mr. President, you launch a PROTECT AMERICA action, organized by your Trump 2020 campaign for your supporters to show up with the willingness to fight and physically protect the statues and monuments of our history wherever they are threatened by Hate America goons?

The patriots who protected the statue of Columbus in South Philly with guns and baseball bats last weekend are the models here.  They were condemned, of course, by Philly’s Hate America Democrat Mayor.

Models also are New York’s Orthodox Jews who used bolt cutters Monday (6/15) to cut through gates that had been ordered welded shut by Communist Anti-Semitic Mayor DeBlasio earlier in the day to prevent children in Jewish neighborhoods from playing, ostensibly because of Chicom-Dem-Media Virus fears.

We need you, Mr. President, to call on your millions to act as did these heroes everywhere that freedom is threatened by Antifa, BLM, and Hate America Democrat mayors and governors.

Those patriots with guns and bats in South Philly and New Yorker Jews with bolt-cutters are the HFR Heroes of the Week.

Or, Mr. President, how about calling for your supporters to boycott NASCAR for taking a submissive knee to BLM?  Or for their deluging every virtue-signalling corporate sellout with Twitter ridicule?

We complain and whine way too much about the dominance of the Left on social media, Twitter, FB, and Google’s YouTube in particular.  How about, Mr. President, telling Brad Parscale, the techie guru running your 2020 campaign, to organize Trump supporter dominance of social media?

Also, Mr. President, you could declare it is the patriotic duty of all your supporters to disobey the unconstitutional lockdown edicts such as by Dem Gov Whitmer’s extension all the way to mid-July or Dem Gov Newsom’s requiring mask-wearing everywhere in public.

And here’s a fun idea, Mr. President.  You could suggest – and even donate yourself to – a Crowdsource/GoFundMe funding to sponsor BLMers to migrate to Ghana per the invitation of the Ghana government to “come back home where they are wanted.”

One requirement for sponsorship, though: they must give up their US citizenship.

Oh, and just between us, you could wonder into Brad’s ear it would be fun if somehow a rumor started that the IRS will soon launch a personal forensic audit of Dorsey, Zuck, all the editors of the NYT, WaPo, CNN, and AP, with the express purpose of finding something that can put them in jail.  Just to see how much their cages would be rattled.

And for the Lord’s sake, Mr. President, start getting serious on how you are actually going to enforce Photo Voter ID on Nov 3, using Indiana’s Photo Voter ID law upheld by the Supreme Court.  You know better than I do that if Dems steal the election with mass voter fraud, they will put you and every member of your family in prison.  They are playing for keeps in a street fight with no rules – and so must you.

Speaking of the Supreme Court.  It’s unconscionable decisions this week should leave us no choice.  It’s obvious what’s going on with Chief Justice Roberts.  He’s scared that the Dems will win in November, so he’s preemptively trying to get on their good side now so they won’t blackmail him like Obama did on his vote for Obamacare.

Nonetheless, you must play street fight hardball for your and our country’s sake, Mr. President.  So it behooves you get the message to Roberts that you are fully prepared to treat him as did Obama and the Dems continue to.  Else I will second the motion of Sen. Tom Cotton that you resign and will make sure it carries.

Then there is the despicably outrageous decision of Justice Gorsuch (joined by Roberts), claiming in Bostock v. Clayton County that “An employer who fires an individual merely for being gay or transgender violates Title VII” of the Civil Rights Act of 1964.  The scathing dissent by Justices Alito and Thomas:

And in any event, our duty is to interpret statutory terms to ‘mean what they conveyed to reasonable people at the time they were written.’ A. Scalia & B. Garner, Reading Law: The Interpretation of Legal Texts 16 (2012) (emphasis added).

“Title VII has subjected employers to a nightmare of litigation to fire a black worker who happens to be underperforming. But to now add transgenderism and homosexuality to the mix is ludicrous.

What if someone comes into work cross-dressing and is extremely disruptive? What if someone is just simply a lousy worker? What about religious liberty? Does the First Amendment not mean anything? Does a Catholic school now have to hire a cross-dresser?

What about demanding that doctors perform castration operations? What about allowing men who think they are women into female sports? This is yet another example of the courts creating a super-right that infringes upon a real right.”

We already know why Roberts voted.  The insane illegality of alleged originalist Gorsuch makes you wonder if the Dems haven’t discovered something on him sufficiently blackmailable. Or he’s been bought off. If so, it is incumbent on Barr’s DOJ to find and expose it.

It is suspiciously no coincidence that last Friday (6/12) just before the Gorsuch-Roberts ruling concocted a fundamental right to the mental illness of transgenderism on Monday (6/15), that: Trump Finalizes Rule Defining Gender as a Person’s Biological Sex.

POTUS had to know about the Bostock decision made earlier and to be announced within 72 hours.  So he issues a HHS ruling that “gender identity” is not protected under federal law prohibiting sex discrimination in health care.  Health care not employment.  The contradiction has to be resolved with another SCOTUS decision.  Time until then to apply enough nads-in-a-vise pressure to corral Gorsuch and Roberts into obeying the Constitution as they used to.

Over at Taki’s, Chris DeGroot describes what America is basically suffering from:  A Plague of White Submissiveness.

To his many examples, we can add the Chicago Fed firing economics professor Harald Uhlig for criticizing BLM’s call to “defund the police.”  Note in the link all the protestors against Uhlig are white, and that seven out of nine Chicago Fed Directors are white.

The most disgusting example of the week was the pathological auto-racism of Chick-fil-A CEO Dan Cathy saying White People Should Shine Black Peoples’ Shoes.

Yes, DeGroot would surely add these example of the plague – but what is the infection causing it, giving formerly normal healthy people like Dan Cathy a mental disease?  Is TTP the only place to have figured this out?  That the fear of being envied causes white auto-racism – indeed, causes whites to be Auto-Nazis wanting to commit holocaust upon themselves?

Incidentally, for any BLM/Antifa condemnation of your rejection to submissiveness to their demands would be to politely respond:

“Thank you for sharing.  I would like to cordially invite you to be the recipient of self-induced unlawful carnal knowledge.  Bless your heart.”

We’ll close with announcing that TTP will soon have available the latest To The Point T-Shirt.  The front will say in big bold red letters:

On the back, along with the TTP logo it will say:

WHAT YOU THINK OF ME

IS NONE OF MY BUSINESS

You may have seen the announcements this week for our rescheduled Wheeler Expeditions’ Africa Dream Safari, August 1st to August 11th – and Wheeler Expeditions’ Hidden Central Asia, August 28 to September 16.  Clicking on the link will give you all the details.  Hope you’ll join us on one – your choice!

And okay, a final example of Trumpian humor:

Note that POTUS had a chat with Tulsa’s mayor who decided to cancel his curfew.  Should be a fabulous humongous rally. First of many more.  If any TTPers attend, please give us a report on the Forum!  KAG!