Published June 18, 2021 | By Dr. Jack Wheeler
You may have to listen to what Tucker is saying on Tuesday evening (6/15) more than once to grasp its enormity.

Especially when the Daily Mail ran this headline that same day (6/15): White House calls Capitol riot a ‘terrorist attack’, introduces Pentagon anti-radicalization to stop the ‘lethal’ rise of ‘white supremacy’ in the military and pushes to ‘purge’ the internet of ‘extremist content’

Namely, that our corrupt FBI didn’t just have an “intelligence failure” in not being aware of a “terrorist insurrection” being planned to seize Capitol Hill last January 6, just didn’t warn the Capitol Hill police to take preventative measures once its agents found out about it – but that the FBI organized the “insurrection” with its agents in place with the express purpose of demonizing Trump supporters, patriots and conservatives as “domestic terrorists.”

Tucker’s report is based on the Revolver News research on Monday (6/14): Unindicted Co-Conspirators in 1/6 Cases Raise Disturbing Questions of Federal Foreknowledge. What you’ll read here is going to blow your mind.

Of the 14, only 6 were criminally charged.  That’s because of the remaining 8, at least 5 were FBI informants or undercover agents.  Originally, the plot was to storm and seize control of the State Capitol Building in Lansing (this Wikipedia mentions).

Now be sitting down:  the head of the FBI field office, Steven D’Antuono, organized the infiltration – indeed the incitement and very creation of the plot.  Shortly after the plotters’ arrests, FBI Director Wray announced that Agent D’Antuono was being promoted to Special Agent-in-Charge of the FBI field office in… wait for it… Washington DC.

Yep, this Whitmer Plot was a trial run for the FBI’s January 6 Insurrection Day at Capitol Hill.  What happened on that day was the Reichstag Fire of the Democrat-Deep State Nazis who run the federal government today.

What Stewart Rhodes, founder of Oath Keepers which has several members being brutalized as political prisoners in the DC jail right now, says is true: Oath Keepers Leaders Speak Out on Government Persecution — They Are Using Jan. 6 Like Nazis Used Reichstag Fire in Germany.

I hope you’ve (or will) read James Kunstler’s The Three-Way Squeeze That Screws Zhou Xiden on TTP yesterday (6/17).

Yet China Zhou is being squeezed in many more ways than just the three James outlines: Faucigate with respect to US funding of the China Virus at the Wuhan Virology Lab; emerging exposure of 2020 election fraud putting Xiden in office; inescapable Dem-responsible double-digit inflation.

Here are three more. The exposure of the FBI as perpetrators of the Capitol Hill Insurrection; the parental rebellion across the nation against Critical Race Theory racism; the 10th Amendment rebellion by state and even county governments against unconstitutional federal rules and control.

Not to mention the Man from De Mentia’s increasingly obvious slide into deep senility – made so painfully clear for the world to see by his antics in Europe this week. Here’s Sky News Australia making fun of him at his press conference in Geneva yesterday (6/17):

Here’s the point to all of this.  Rahm Emanuel, when he was White House Chief of Staff for Obama, famously declared, “Never let a serious crisis go to waste.”  As a leftie, he meant “always use a crisis to expand government control over people’s lives.”

The Xiden Stolen Presidency has become one gigantic can of seething Crisis Worms.  What an opportunity to take advantage of, to not let it go to waste.

A particularly exciting example of crisis-opportunity for us came in Fox News’ lead story on Sunday (6/13): 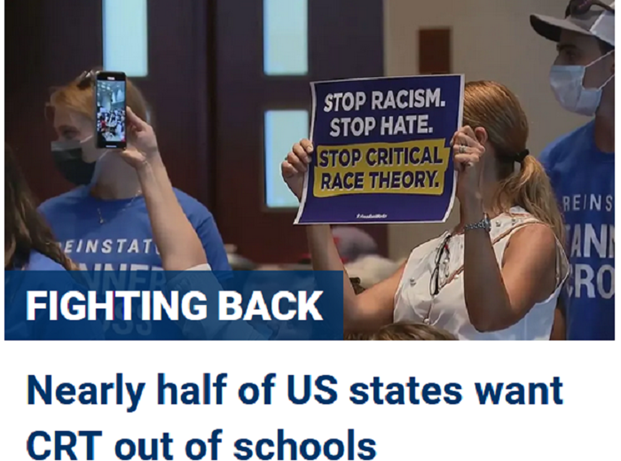 Or, as Revolver News has it: How An Army of P-Off Moms Are Single-Handedly Destroying the Left’s Marxist Plot.

Or this on BPR: ‘Teaching kids how to hate each other’: Successful black dad earns major accolades for dismantling CRT.

Already half the country is ready to ban the fundamental core of Democrat politics: racial hate towards Whites.  That’s what Dem “Identity Politics” is all about – replacing one enemy of mankind, the economic class of exploiting bourgeois capitalists, with another, the race of those with white skin color.

“Stop Racism – Stop Hate” is precisely the right refutation of what the Left is up to.  Treating people in groups, not as individuals, demonizing some groups against others, promoting hate and tribal war between them, rather than mutual cooperation to mutual benefit.

Looking for a guide and info on how to get rid of CRT in the schools where you live?  Citizens for Renewing America has it.  They have a Toolkit for Combatting CRT in Your Community: An A to Z Guide On How To Stop Critical Race Theory And Reclaim Your Local School Board.

Note this war against CRT strikes at the core of the entire “white supremacist – domestic terrorist” argument made by the fascist attorney general Merrick Garland you saw in Tucker’s video above. 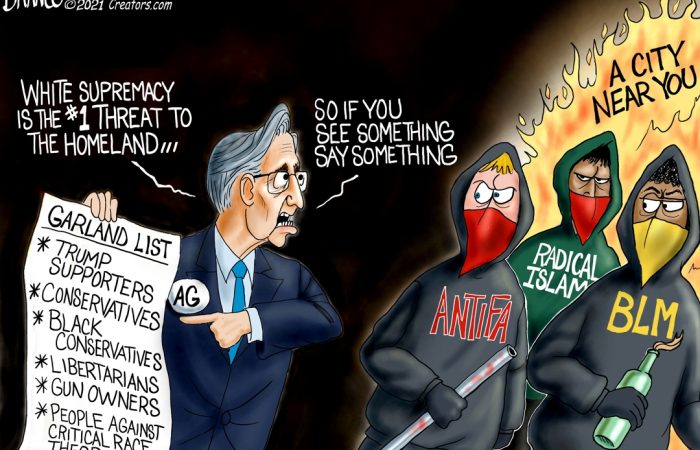 Personally, I’m waiting for someone to ask this jerk, “Mr. Garland, regarding your condemnation of white supremacy – since you are white yourself, when will you quit being part of the white supremacy by announcing your resignation so someone of color will be Attorney General?”

I’m also waiting for Fox to start major lead stories exposing  CAPITOL HILL “INSURRECTION” A FBI PLOT ORGANIZED AND LED BY FBI AGENTS – DEMANDS GROW FOR ALL THOSE IN DC JAIL TO BE FREED NOW.

Meanwhile, however, Tucker Carlson is to applauded for his extreme courage in exposing FBI corruption in this.  Clearly, Tucker is the HFR Hero of the Week.

And time now for the HFR to thank one of TTP’s pride and joys, Mellie, for sending us this wonderfully informative explanation of what Critical Race Theory-“Systemic Racism”-“White Supremacy” is all about on a personal level: How I Fought Back and Saved My Company from Woke Cancel Culture.   Thanks, Mellie!

Then there are governors down to county sheriffs invoking the 10th Amendment against federalie fascism.

“Every sheriff in the state of Utah signed a letter saying they would safeguard the Second Amendment in the midst of proposed legislation and recent executive orders authorized by President Joe Biden.”

This is organized by one of America’s true heroes, Sheriff Richard Mack of Mack v United States, a Supreme Court decision upholding that state officers cannot be compelled to execute federal law.

Mack heads CSPOA.org – the Constitutional Sheriffs and Peace Officers Association. Read the CSPOA Statement of Positions.  You’ll want to get involved.  This is on your county’s level, where-you-live level.

Your local officials need to know they have a significant degree of sovereignty and have the constitutional right by Supreme Court decision of non-enforcement and non-cooperation with federal officials demanding unconstitutional control on their local people.  You can personally help bring more freedom to where you live!

And Inflation Hits Highest Level Since 1979 in Philly Fed Survey.

And Wholesale prices jump 6.6% in the fastest rise on record as soaring inflation threatens economic recovery

And Inflation’s Here, Getting Worse, And Could Last Longer Than COVID-19 Pandemic

There’s no way out for the Dems on this.  They are addicted to massively inflationary deficit spending and can’t raise interest rates to compensate, as federal debt service would balloon to most of the federal budget.

They can’t deny it’s happening to anyone buying groceries or putting gas in their car.  They can’t blame it on PDJT – he had nothing to do with spending now.  In a word, they’re screwed.  Which is magnified by all else above.

Which is why they have only one hope – cheat like 2020 on steroids.

This, of course, is 100% unconstitutional per state legislature authority to determine those laws as specified in the Constitution.  This makes it critical that you do whatever you can to make sure your state legislators understand this, and their 10th Amendment rights.  Agreed? 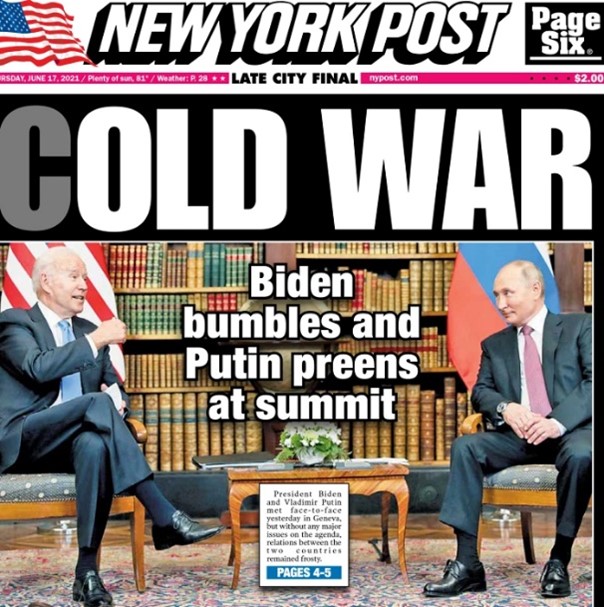 And this observation of Putin’s: 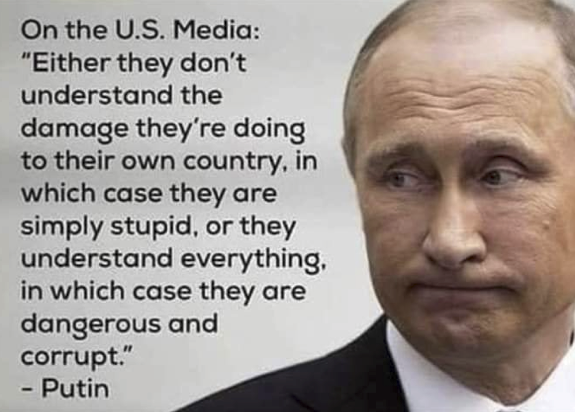 Night before last (6/16), Clay Travis – replacing Rush – was on Tucker explaining how now, all of a sudden, “We’re seeing a revolution against woke madness” – or at least the glimmer of it.  Watch:

This triggered Glenn Harlan Reynolds in the New York Post yesterday (6/17) to realize: The Tide Is Turning Against The Woke-Liberal Blob That Misrules Us.  It’s such an enjoyable must-read.

We close with good reason and evidence to be optimistic about our country’s future.  It is with that happy note that I wish all Dads out there an exceedingly Happy Father’s Day on Sunday, June 20.

The greatest joy and privilege of my life is to be a father – the greatest gift of my life from the mother of my two sons.  Here they are, Brandon, Rebel, and Jackson, wishing me Happy Father’s Day.  How lucky can one man be?    Have a wonderful celebration of your blessings to all TTP Dads. 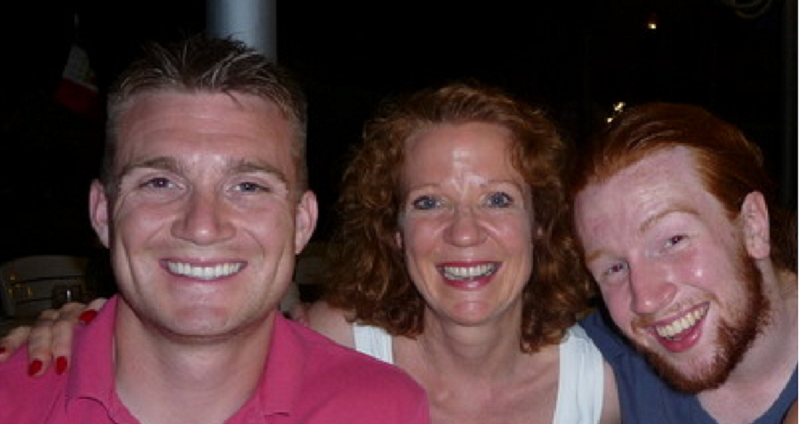