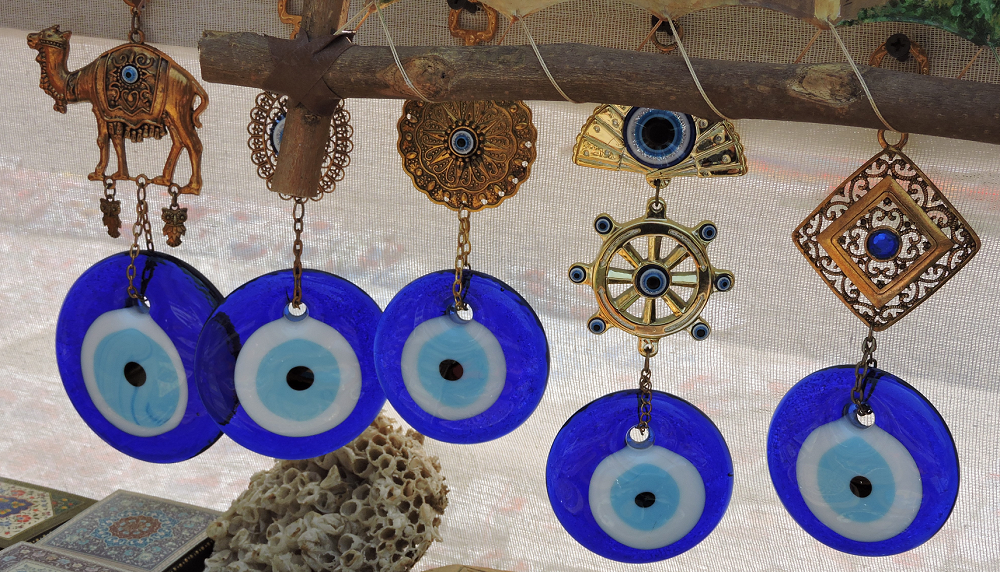 Welcome to the Root Cause HFR.  Libtard Groupthink’s mantra is the demand to solve the “root causes” of what they hate about America.  That turns out to be what they call the “systemic racism” hardwired into America’s DNA from the inception, at which they peg the year 1619.

This is going to be a different HFR.  Rather than itemizing and discussing the significant events of the week, we’ll be exposing the root cause of the whole dog’s breakfast that’s driving America insane right now – either cowardly or criminally so.

For it turns out that the Libtard DemFascisti are right – the root cause problem is systemic racism, but it is the opposite of what they think it is.  Thus here is the explanation of the real systemic racism that is killing America.

Veteran TTPers will be familiar with this, and why it is embodied in the pendants pictured above.  Not so much for our newer members.  Reminder or revelation, what follows needs to be clearly understood by every American patriot if we are going to cure our country.

Yesterday (6/11) in TTP, Patricia McCarthy rightly denounced “Our Gutless Republicans” for their cowardly refusal to stand up to and denounce BLM/Antifa looting and thuggery.

Such cowardice now extends to the highest echelons of our military.  Yesterday morning at the National Defense University, the Chairman of the Joint Chiefs, General Mark Milley publicly apologized for accompanying his Commander-in-Chief in walking to St. John’s Church vandalized and burned by BLM rioters.

Milley has never been in combat, either in Iraq, Afghanistan or elsewhere.  He’s a bureaucrat in uniform, one of the Perfumed Princes of the Pentagon.  The effrontery of disrespecting his Commander-in-Chief requires he be relieved of duty.

The question is, why would he, just like all the Pubs in Congress, be such apologetic gutless wonders?

In a paper rightly praised by Patricia McCarthy, the Claremont Institute’s Jeremy Carl advises, To Win the Cold Civil War, Seek Peace Through Strength.  Carl is absolutely on target denouncing the “apparatchiks of appeasement” on the Right for not calling out the Left for its lies and standing up for law and order.

Yet the question remains – why do they lack the courage to do so?  What are they really afraid of?

There’s a clue in this photo of BLM protestors and asking what do these people have in common with the gutless wonders in Congress and the Pentagon? 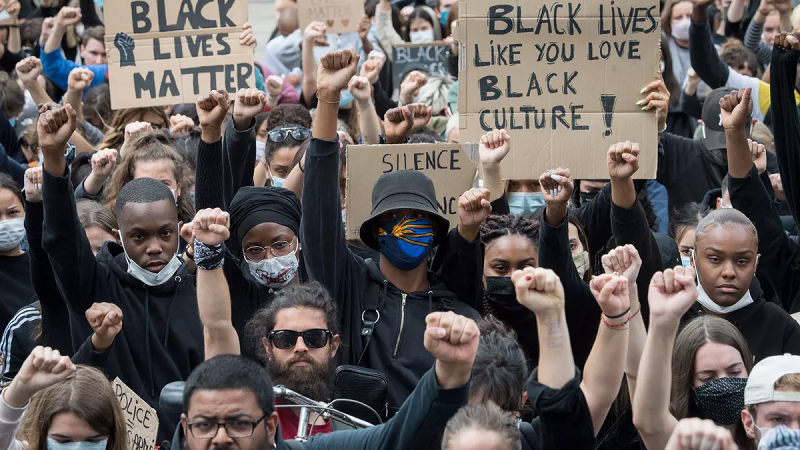 Scroll through the multitude of images of “BLM protests” on Google, and repeatedly you’ll see the same thing: a majority of the protestors are white.

It’s the same with Antifa terrorists only more so.  Scroll through the images of “Antifa” on Google, and you discover Antifa is primarily composed of whites in violent protest against “white supremacy.” 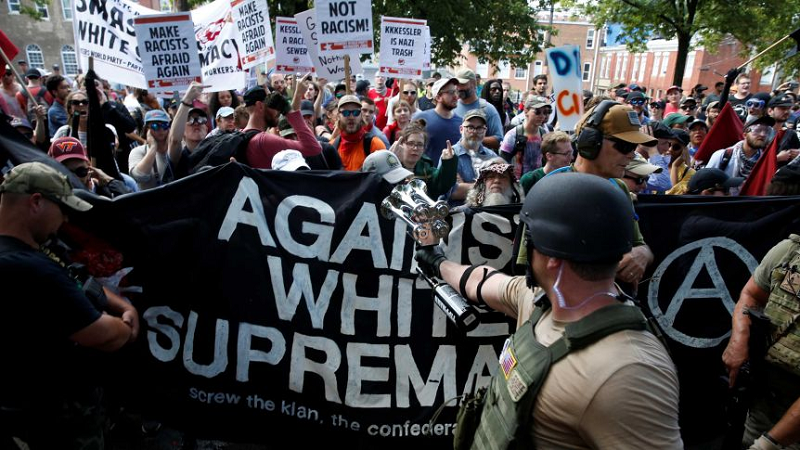 The whites of BLM and Antifa are racists against themselves, they are auto-racists.  They are the vanguard, the leading proponents of America’s real “systemic racism” problem:  white auto-racism.

What could cause such a thing – for vast numbers of people tortured with collective guilt, hate, and anger over the color of their skin?

The answer lies in those pendants above, for they embody the fear of being envied.

Fear of the envy of others is one of mankind’s most deeply primal and pervasive terrors. Ask a taxi driver in Cairo why he has a beaded blue eye dangling from his rear-view mirror, and he’ll tell you, “Many people will look at you with evil eyes and want to harm you when they see you with a new car – so this protects me.”

Envy-avoidance is one of the most basic and primary motivators of human behavior. It’s why village life in India and Egypt has not evolved much in thousands of years: the instant some villager tries to do better, so much envy is directed at him or her by other villagers that they quickly abandon the effort.

The crux understanding of all manifestations of terrorism, from ISIS to Antifa is that they a form of envious rage.

In this, their envious hatred is focused particularly on whites, skin color.  That’s what makes Antifa/BLM the New Nazis, who hate all whites as much as they hate Jews.

Liberalism is thus not a political ideology or set of beliefs. It is an envy-deflection device, a psychological strategy to avoid being envied. It is the politicization of envy-appeasement.

One definitive characteristic of both envy and the fear of it is masochism. Envy is not simply hatred of someone for having something you don’t — it is the willingness to masochistically hurt or deprive yourself as long as the person you are envious of is also hurt or deprived. The ultimate example is the Palestinian suicide-bomber.

Similarly, the more one fears being envied, the more one is driven to masochistic self-humiliation in attempts at envy appeasement.

The lethality of liberal envy-appeasement is that personally-felt guilt is projected onto the various social or tribal collectives to which the liberal belongs and are a part of his self-identity. Self-loathing is transformed into a loathing of one’s society or race.

So we come to the “root cause” of it all, the “systemic racism” killing America, whites succumbing to the ubiquitous guilt-mongering of the Left, becoming in masochistic abasement auto-racist: racist toward their own race.  A classic example being white writer Susan Sontag who denounced her own race as “the cancer of human history.”

So what do we do about it?

First is to realize we humans will never get rid of envy – the ancient Israelites tried it 3,000 years ago with the 10th Commandment, and it remains the most disobeyed of all commandments to this day.

Second is to realize it takes an exceptional amount of courage to not be afraid of envy. It is horribly hard for any single individual to strive his or her best while envious evil eyes are directed at them. It is harder still for an entire society, an entire country to do so, most especially when it is the most successful culture, society, and country in world history.

Third is to realize we need patience and sympathy for those whose souls are convulsed with fear.  They need to understand that envy is like voodoo, which only works when the person it’s directed at believes in it. Witch-doctors have no power over people who refuse to be afraid of them. The only power evil eyes have is the deep, irrational, superstitious fear that their envy has the magic power to do harm.

Fourth is simply to explain to those so convulsed that it’s okay not to hate themselves for the color of their skin.  They can either let their racial self-hate rot their soul to the point where their only choice is to rid the world of at least one evil white person: themselves via suicide.  Or they can cast that primitive tribal collective guilt away, to be an individual happy inside their own skin.

Fifth is to accept the times when actual courage is required to stand up to actual threats — physical ones (be sure to live in a concealed carry state, be trained and be ready), and social ones like trying get you fired or ruin your life.

A shining example of courage regarding the latter is J.K. Rowling, world-famous author of the Harry Potter books.  After tweeting criticisms of transgenderism, she has suffered a deluge of threats and hatemail. Rowling penned a lengthy response Wednesday (6/10) on her website which could be entitled, “I Refuse to Bow Down.”

“I find [transgenderist ideology] deeply misogynistic and regressive… Huge numbers of women are justifiably terrified by the trans activists; I know this because so many have got in touch with me to tell their stories. They’re afraid of doxxing, of losing their jobs or their livelihoods, and of violence.

But endlessly unpleasant as its constant targeting of me has been, I refuse to bow down to a movement that I believe is doing demonstrable harm in seeking to erode ‘woman’ as a political and biological class and offering cover to predators like few before it.”

That’s what it takes – the courage to refuse to back down, after having the courage to stand up for what you believe in the first place.  It’s courage that neither Pentagon Princes nor RINOs in Congress have.  Which is why J.K. Rowling is the HFR Hero of the Week.

Now here’s the gut-punch question – does the one man upon whom we depend on more than any other to protect us from the envious horde determined to destroy our country, does he have this courage?

Trouble is, it was way last month when POTUS said he will declare Antifa a “domestic terrorist organization” – and I told friends, I don’t want will, I want have.  The “have” never comes, and here we are with these looting terrorists seizing 6 blocks of downtown Seattle.  All big talk, no action.

The response from the Mayor of Seattle?  She laughed at him: “Go back to your bunker, Mr. President.”  This is a very quick way to lose respect, lose control, lose your supporters, and become a powerless laughingstock.  Maybe this will wake him up, shrug off Kushner’s disastrous cautions, and shut this CHAZ nonsense down.

The easiest way would be to tell Milley-pooh to stand aside, send in the Marines under the Insurrection Act to cordon CHAZ off, no one gets in or out, shut down all utilities such as water, electricity, and cell towers, and block all food deliveries.  Then send the anarchists the message:  surrender unconditionally or starve.  When they do, militarily arrest them and cart them all off to a military prison with no bail, and prosecute them to the full extent of law under a military tribunal.

No coming in with guns blazing, just an offer they can’t refuse.  Bottom line:  No more words and tweets – we need action that takes care of the problem, President Trump, and we need it now.

There is an upside to all this Leftist Commie-Fascist mayhem – and that is the coming death of the Big City Democrat Machines running these poverty pit hellholes.  The massive looting of stores means massive defunding of city governments which depend primarily on sales taxes to fund their budgets and pay off the unions.

No stores, no sales taxes, and cities can’t print money (nor can states, while Trump can tell them to suck an egg).  Note that Walmart and Target are refusing to say if they’ll restart in Chicago, Minneapolis and elsewhere hit.  It’s a good bet that means fuhgeddaboudit.

No money, no Washington bailouts, and the Big City Dem Machines in power for decades could do an el foldo, gone with the wind.  It’s a clear possibility now.

It’s way past time for POTUS to dismiss the fearful wimps around him and start rescuing the country from the destruction the Dems have wrought upon it.  He has time to do so but there’s no time to lose.

The above is just an intro to the full elucidation in my next book, No Fear of the Evil Eye: Key to Peace, Freedom, and Prosperity.  I’m considering posting excerpts in TTP like I did with The Jade Steps – what do you think?

Meanwhile, Rebel and I have been working 24/7 to rescue Wheeler Expeditions from the world’s largest industry, travel and tourism, collapsing.  We have now successfully rescheduled our entire expedition menu.

Isn’t it about time you escaped from lockdowns and being engulfed in social insanity to have a fabulous life-memorable adventure in an amazingly cool part of the world?  Then join Rebel and me on our Wheeler Expedition to Hidden Central Asia.  Dates are August 28 to September 16.  Clicking on that link will give you all the details.

Carpe diem – life is short!  The time is especially now for a great adventure in your life.