Welcome to the Hahahahahah! HFR.  I cannot recall a week that has brought me so many belly-laughs as this one.  I think you’ll agree.

Let’s, however, pull some heartstrings first.  On Wednesday (6/06), President Trump commuted the life sentence with no parole for Alice Marie Johnson, who was in her 21st year of federal prison.  Here she is greeted by her family upon her release:

She expresses nothing but thankfulness and gratitude, looking at the television cameras to say “God bless America.”  In an interview with the Associated Press, she said:

“I’d like to say, President Trump, thank you for having mercy upon me. Thank you for taking the time to look at my case, and feel like I deserve a second chance in life. I promise I will not let you down.”

Now compare that to the reaction of this morally diseased Democrat, who tweeted yesterday:

Democrats today are not mentally ill, they are morally ill, their souls are infected with terminal moral cancer.  Dems need to be hammered with this by their Pub opponents all the way to November 6.  Especially Schiff, who is living proof that Dems couldn’t care less about Blacks.

With the results of California’s jungle primary Tuesday (6/05),  Schiff’s opponent is Johnny Nalbandian.  He’s a full-bore unapologetic Pro-Trump American, as you can see in the link. You’ll love Johnny’s twitter feed. He’s also ethnic Armenian (his parents fled Soviet Armenia to the US in 1944).

Note that CA’s 28th CD has the largest Armenian-American population of any congressional district in the US.  If I were Johnny, I’d do whatever it takes to get the world’s most famous Armenian-American, Kim Kardashian (and even better, her husband too) to speak at a campaign rally for me.  Since he’s hailed as a marketing genius, I hope he’s already thought of that.

In any regard, if you’re a California TTPer, consider helping Johnny however you can.  We need to get scumbags like Adam Full-of-Schiff out of office.

Now that we’re in California, might as well begin our Hahahaha’s there.

“What analysts have missed all over the country is that while the Democrats are able to maintain political power in places like the Golden State, they’ve not be able to stop the state’s slide into economic and social oblivion…

That means the suburban, college-educated, mostly white, Republican married women who appeared to desert Trump in droves in November 2016 are starting to come home to the GOP.”

The money went to waste as the Soros candidates lost to more traditional law-and-order prosecutors who didn’t share progressive views or have hostile attitudes toward police.”

Also, from Hollywood, 72 year-old has-been “I was-a-celebrity-once!” Cher declared this week (6/04) that EPA chief Scott Pruitt “deserves to be in prison.”

This is a Hahaha Two-fer, because her and other libtards’ rage against Pruitt means he’s doing a fabulous job at steadily shrinking one of the most fascist groups of deep state federalies in DC (with one exception – see below).  And because the reaction to her statement of anyone over 30 is, “Who cares?” – while the reaction of anyone under 30 is, “Who’s Cher?”   Millennials have never heard of her.

To rub it in, POTUS told reporters on the South Lawn this morning (6/08), “Scott Pruitt is doing a great job.”

On a national level, we have a plethora of Hahaha moments.  In no particular order:

*Mitch McConnell Cancels Senate’s Traditional August Recess (6/05).  This is completely hilarious.  You have no idea the world of hurt so many of these guys are in back home.  Their wives and kids have all made elaborate summer vacation and travel plans, and wow are they ticked at having them ruined.

No joke, this will for sure happen to dozens of them when they come home this weekend.  Serves them all right, of course.

Word is, a number of Pubs are angrily pounding on Mitch’s desk demanding he rescind all filibusters and delays for all confirmation votes save for SCOTUS nominees.  Then the votes could proceed as if the Dems weren’t there, and the job will all get done by end of July.  Vacations saved.  Enjoy the show.

*The Feckless Bee’s Advertisers Have Deserted Her (6/06).  After her disgusting vulgarity about Ivanka Trump, her latest show was bereft of ads from commercial sponsors, just plugs for other Warner cable shows.  Looks like Sammy’s career is being flushed as was Kathy Griffin’s.

*Mick Mulvaney Fires All 25 Members of CFPB Advisory Board (6/08).  The Consumer Financial Protection Bureau is the most fascistically, unconstitutionally, and unaccountable constructed federalie bureaucracy in DC.  It is – no surprise – the brainchild of Senator Fascist herself, Pocahontas Warren.

All Libtards hate Mick Mulvaney for the same reason they hate Scott Pruit – just as Scott wants to throw the EPA in the trash can, Mick wants the same with the CFPB.  Naturally, this triggered Pocahontas.  She tweeting this mild snark, but word is, she’s having such a meltdown she may have a brain aneurysm.

But Mick wasn’t satisfied triggering just Libtards this week.  He went after every member of the Establishment Elite in the whole Senate.

Mulvaney wears two hats – he runs both the CFPB and the OMB, the President’s Office of Management and Budget.  Yes, he’s that good.  Wearing his OMB hat, he announced:  Senate Will Not Do an Omnibus This Year.

This is a big deal.  Although the House has several times, the Senate has refused to pass a constitutionally-mandated federal budget for years now.  The Feds are funded with an unending succession of “Omnibus” bills and Continuing Resolutions.

Mulvaney is informing all the Rinos and Dems that they will pass individual appropriations from now on – that POTUS can veto without shutting the whole government down – and they’ll take it and like it (to quote Bogart).

It started on Saturday (6/02), with MoDo – yes, MoDo – in her New York Times column – yes, the New York Times – dumping all over Former President Zero: Obama – Just Too Good For Us.  It is scathing.

“As president, Obama always found us wanting. We were constantly disappointing him. He would tell us the right thing to do and then sigh and purse his lips when his instructions were not followed.

It was a signal to the world of the Libtard Elite that Obama is now fair game.  The Associated Press – yes, the AP – got the message and hammered him with a real no-kidding-around major scandal.  Actually, “major” is way understated:

Obama administration secretly tried to help Iran’s mullahs get access to $5.7 BILLION by ignoring nuclear deal’s rules – and lied to Congress about it (6/06).

As did CNN – yes, CNN — Obama Worked to Allow Iran to Exchange Billions to Bypass Sanctions (6/07)

No wonder POTUS was incensed, as well all should be.  Zero belongs in Leavenworth.  Better would be Guantanamo.  This is flat-out Treason.

Speaking of jail time.  You can bet the farm that Slippery Jim Comey is sweating blood with this: Andrew McCabe Seeks Immunity Deal for Testimony.

As is obvious to everyone, you don’t seek immunity unless: 1) you’re guilty of something big time and know the prosecutors can prove it, and 2) you can rat on someone the prosecutors badly want and is more important than you.

That someone, of course, is Slippery, Lying, Scumbag Jim.  And why stop with him?  Could the former FBI Deputy Director be ready to finger Obama’s AG Loretta Lynch?  Who else? Brennan?  Clapper?

This is not the time to demand, as many are, that McCabe’s offer be turned down.  He’s small fry compared to Comey, Lynch, Brennan, and Clapper.  If he takes them down, it’s worth it to let him skate.

Hope you can stand more fun.  How much do you think it pained the New York Times to headline this yesterday (6/07)?  Ex-Senate Aide Charged in Leak Case Where Times Reporter’s Records Were Seized.

Not just any Senate “aide” – James Wolfe was the Security Director of the Senate Intelligence Committee for 29 years until he recently retired (wonder why).  As such, he was in charge of maintaining all classified information from the Executive Office of the President to the intel committee.  Fox put it clearly:  Wolfe was arrested and indicted for lying to the FBI.

And it gets better.  Wolfe was leaking all his classified info to New York Times reporter Ali Watkins, 30 years her senior, with whom he was having an affair! Yep, Ali is a “presstitute” for real.

I’ll wait until you get back off the floor after falling down laughing.  But we’re not done yet.  The WaPo tried to spin the sordid affair this morning (6/08) thus: How a Reporter’s Romance with Her Source Muddies the FBI’s Seizure of Her Records.  Nice try.

These two Libtard Lovebirds are headed to the slammer.

Newsweak is so upset over this:  Trump Again Refuses to recognize LGBT Pride Month.  So sad.

On Monday (6/05), Supreme Court Rules in Favor of Colorado Baker Who Refused to Bake Wedding Cake for Gay Couple.  Good news but inaccurate headline.  He was happy to bake a cake for them or sell them cookies etc.  What he wouldn’t do is decorate the cake to their fascist liking.

Nonetheless, and however “narrowly” tailored was the 7-2 ruling, it made Pelosi Galore very unhappy, which makes us very happy.

And this has got to make the Pelosi Fascicrats really unhappy.  The Democrat Governor of Delaware, John Carney, has reversed a state policy allowing children to “identify as transgender” without their parents’ permission.  Sanity among Democrats!  Amazing but true.

Then we have International Winning.

In Austria: Austria to Shut Down Mosques, Expel Foreign-Funded Imams.

In Italy: It’s time to pack your bags’: Italy’s new far-right interior minister warns illegal migrants ‘the free ride is over’ as he promises mass deportations.  Note the smart-aleck “far-right” – well, live with it, Libtards, they run Italy now. 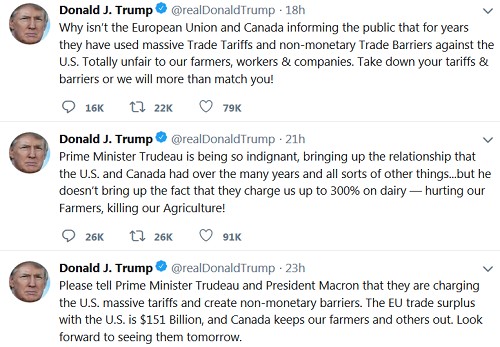 One reason is he can’t wait to devour Canada’s Cutie Pie for breakfast.  Again, enjoy the show.  This is what Canadians think of their leader: 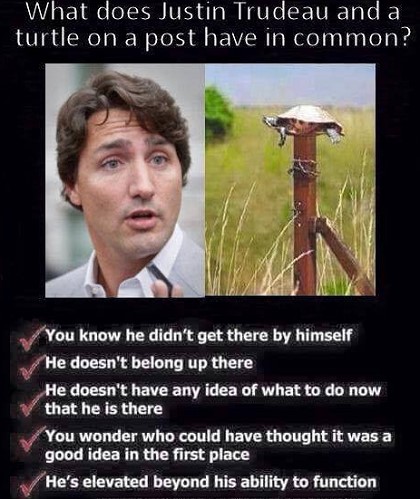 Note that the President is leaving the G7 early – skipping the session on “Climate Change” – to jet off to Singapore to make real history with Kim Jong-Un.  Let’s hope the two will then soon be playing golf together at Mar-a-Lago.  Nobel Peace Prize (and Dem Demolition in November) here we come.

It’s been a great fun week.  In closing, let me thank all the TTPers who took the time to share their thoughts on the Forum regarding Where’s The Left’s Horse?

Wonderful insights, I appreciate them all – and feel free to jump in and share yours as well.  Together, we can figure out how to best identify the Left’s most critical weaknesses and vulnerabilities, then how to best exploit them.