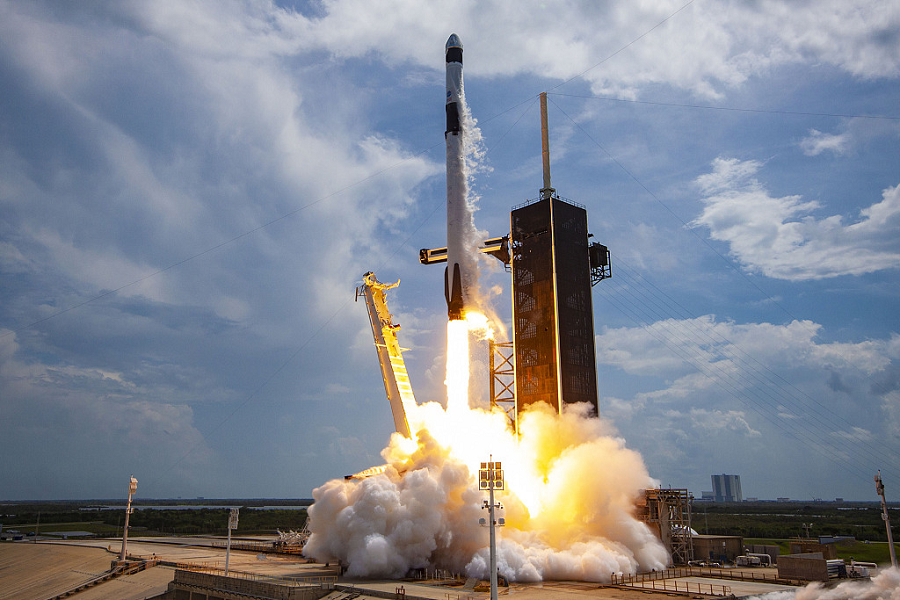 Shortly after witnessing the successful SpaceX launch last Saturday (5/30), the President delivered a remarkable address at the Kennedy Space Center.  Here are a few key excerpts:

“With this launch, the decades of lost years and little action are officially over.  A new age of American ambition has now begun…

Today’s launch makes clear the commercial space industry is the future.  The modern world was built by risk-takers and renegades, fierce competitors, skilled craftsmen, captains of industry who pursued opportunities no one else saw and envisioned what no one else could ever think of seeing.  The United States will harness the unrivaled creativity and speed of our private sector to stride ever further into the unknown…

We have created the envy of the world and will soon be landing on Mars… The United States has regained our place of prestige as the world leader… For every citizen who has eagerly waited for America to reignite those engines of will, confidence, and imagination that put a man on the Moon, I stand before you to say: You need wait no longer.

In the years ahead, America will go bigger, bolder, further, faster, and America will go first.  America will always be first… Space travel is not a feat of engineering alone.  It’s also a moral endeavor — a measure of a nation’s vision, its willpower, its place in the world.  Exploration is a test of our values and of our faith.

America is a nation defined by its commitment to discovery — to solve mysteries, to chart the unknown, to press the limits, to achieve the fullest expression of life’s potential, and to ensure that America is the nation that always leads the way, and especially in space.

This evening, I am more confident than ever before that America stands poised to thrive in this grand undertaking.  It’s incredible.  We are a nation of pioneers.  We are the people who crossed the ocean, carved out a foothold on a vast continent, settled a great wilderness, and then set our eyes upon the stars.  This is our history, and this is our destiny.

Our most daring feats, our most epic journeys, our biggest adventures, and our finest days are just beginning.  America’s proudest moments are still ahead…

So today, as our brave American astronauts shake the Earth and blaze a trail of fire and steel into the heavens, we proclaim for all to hear that we have not yet tested the full strength of the American character, and the world has not yet seen the full glory of the American spirit.  For our country, for our children, and for humanity’s march into the stars, the best is yet to come.”

I have waited many years for such a presidential declaration.  My Aeschylus and America in 2004 expressed it in the section on “Aeschylus and Neal Armstrong” – that we had a failure of nerve in the face of the rest of humanity’s envy for the greatest achievement in the history of mankind, America’s landing a man on the Moon.

We retreated from space, from Vietnam, from everywhere.  Ronald Reagan rescued us, then proceeded to achieve the impossible once again, America ridding the world of the Soviet Union to peacefully win the Cold War.  We’ve been retreating from that heroic pinnacle ever since.  Until, that is, we rejected retreat and strove for greatness instead as we did with Ronald Reagan, and elected Donald Trump.

And that is the source of all Trump Derangement.  For he is what all of them – from BLM and Antifa rioting thugs to Marxist professors to media libtards to Pelosicrats – hate the most:  the man who has no fear of their envy.  Worse, a self-made billionaire who flaunts his earned capitalist wealth, is proud of it and refuses to apologize for it.

As I have explained many times, an essential component of both envy and the fear of it is masochism.  The BLM/Antifa looters are ruining their own communities, just as the Pelosicrats and Enemedia want to ruin our entire economy to prevent Trump from triumphing.

The NY Post cover on Monday (6/01) was clear regarding the looters and thugs destroying the luxury stores of 5th Avenue: 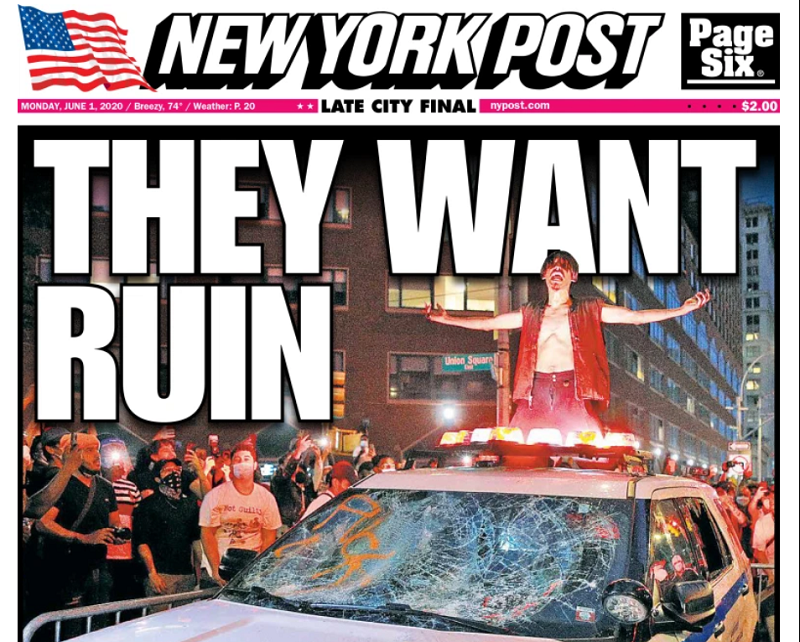 “THEY” are not just looting losers, however, but Democrat Governors in Michigan, Illinois, Pennsylvania, Oregon, Washington, California, and Virginia; the editors and owners of the New York Times; the White House Press Corps; the talking heads on CNN and MSNBC; the ilk of Chuck Schumer and Nancy Pelosi; the minions of Twitter and Google… they all want the ruin of America’s success and its embodiment, Donald Trump.

Masochism on steroids.  And all of them go literally berserk whenever Trump does anything to reject or stop them.  As he pledged to do speaking to the country from the Rose Garden on Monday (6/01).  Here’s the three-minute video, and here’s the White House text.

After warning that a 7pm curfew in DC would be strictly enforced, he concluded:  ”Thank you very much.  And now I’m going to pay my respects to a very, very special place.”

The night before (5/31), more than 50 Secret Service agents were injured protecting the White House from BLM/Antifa violence.   The rioters defaced national monuments and burned the historic St. John’s Church on the other side of Lafayette Square across from the White House.  Built in 1816, every president since James Madison has worshipped there.  The rioters came close to burning it down.

So just after the curfew was in effect, the President and an entourage notably including Attorney General Barr, walked out of the White House front door and to St. John’s.

The photo of the President standing in front of the burned and boarded-up St. John’s drove the demented Demtards into a paroxysm of rage. 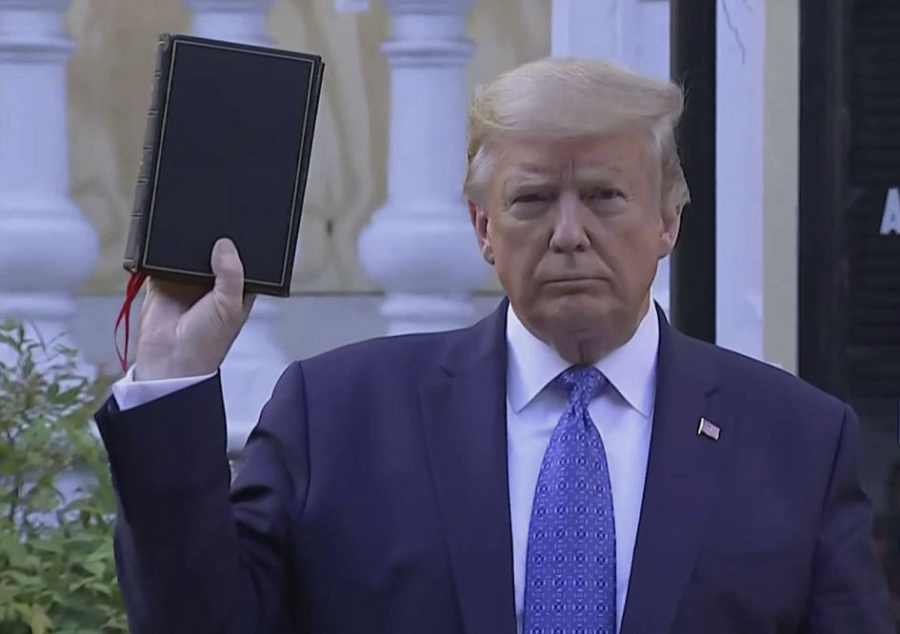 Why?  What was the President’s message?  Ben Garrison explained it this way: 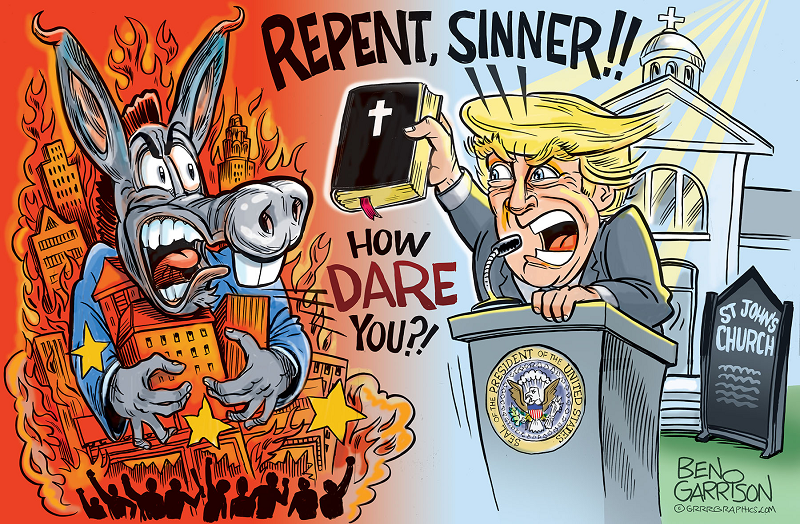 The endless ubiquitous characterization by the Dems and Enemedia of anarchic criminal rioters as “peaceful” was summarized by Newsbusters thus:

What’s dumbfounding from any rational perspective is how Democrat politicians expecting to get elected to office are on the side of the violence and not protection from it.  That’s why Breitbart’s John Nolte is saying: Riot-Embracing Democrat Party Just Had Its Worst Week in 50 Years.

“So here we are, where Democrats are now so radicalized they’re releasing violent criminals into their cities, encouraging illegal immigration into their cities, calling for the police to be defunded, dropping to their knees to plead for forgiveness for being white, and defending wanton rioting, looting, and lawlessness. But…

It can only end in electoral disaster.”

Remember, just about all this anarchic Commie-Fascist-Loser-Looter violence is in Blue States and Deep Blue cities run exclusively by Democrats, often for decades.  The rest of America wants no part of it, while the Dems are embracing it.  So can you imagine the meltdown freakout Dems are having today with the BLS May Economy/Employment Report?

“Today’s report shows much higher job creation and lower unemployment than expected, reflecting that the re-opening of the economy in May was earlier, and more robust, than projected. Millions of Americans are still out of work, and the Department remains focused on bringing Americans safely back to work and helping States deliver unemployment benefits to those who need them. However, it appears the worst of the coronavirus’s impact on the nation’s job markets is behind us.”

Note that this is the result of Trump’s genius working with Treasury Secretary Mnuchin and others designing the SBA Paycheck Protection Program, loaning out $510 billion to small/medium businesses enabling them to re-hire employees laid off – and if they didn’t re-hire them the loans had to be repaid.

That’s what’s happened in May – and if that’s depressing the Dems, wait ‘till they see the BLS numbers for June (and all the way to November).  POTUS of course is celebrating: 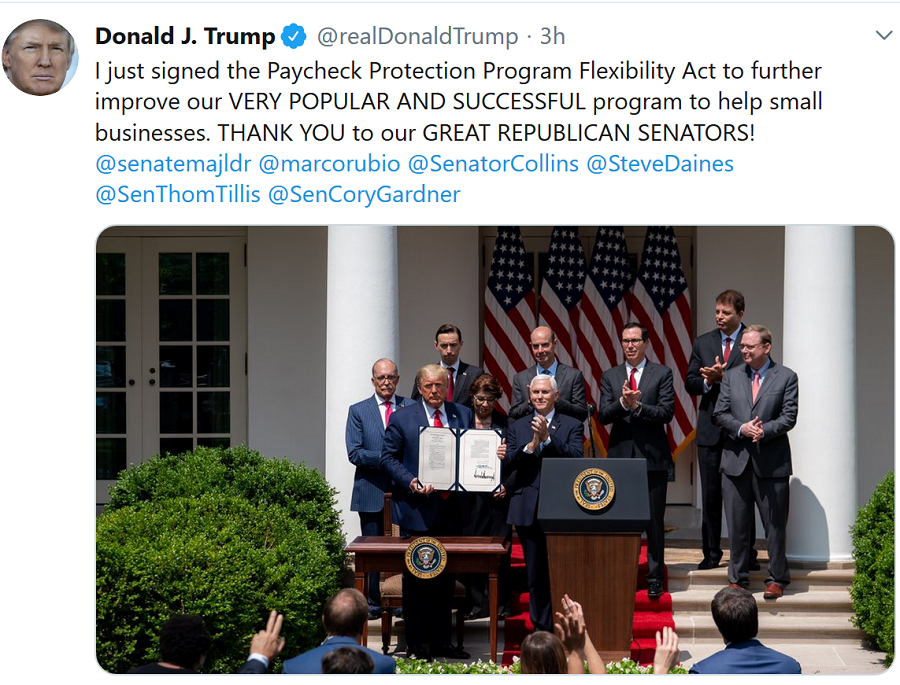 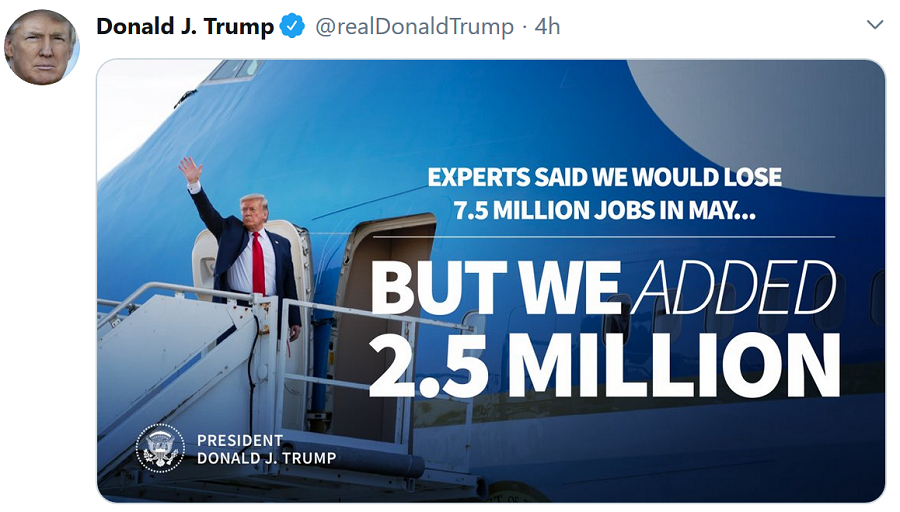 As Mark Levin succinctly put it in what could be the Tweet of the Year:

And this could be the Meme of the Year: 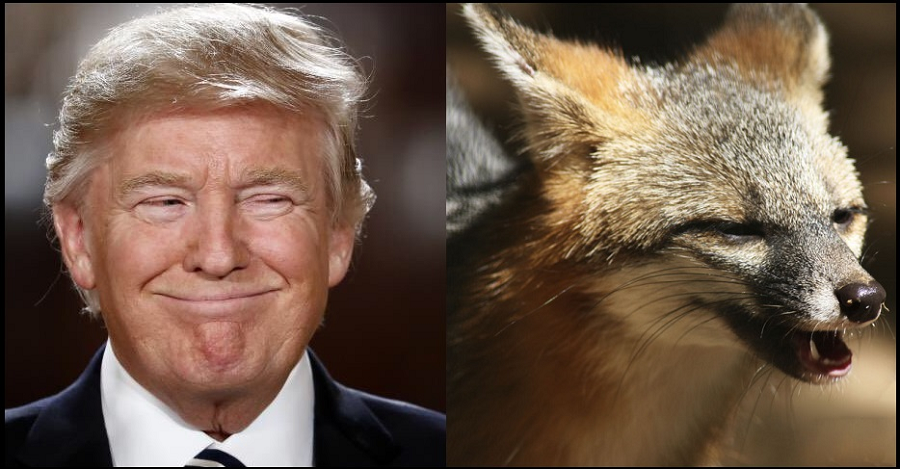 All this marvelous economic news could tip the Dems and Enemedia into suicidal depression, but here might be the clincher.  How amazing is this?

Hey, Dems – and all you airheads at CNN… might as well shoot yourself in the head now and get it over with, why wait until November?

Okay, the five calendar months to November 3 is a few centuries in political time.  The Dems & Enemedia will go even more crazy evil and who knows what will happen.  This week’s bottom line, nonetheless, is their Lockdown and BLM/Antifa Fascism is rapidly biting the dust

Then again, what have POTUS and AG Barr got in store for them?  You can expect DOJ to launch criminal prosecutions of Antifa ringleaders soon.  Then see Sidney Powell’s disgust at the release of the Flynn transcripts.  There’s no excuse left now for Comey, Brennan & Co not to be orange jumpsuited.

.@BaltimorePolice just knocked out a Black woman in downtown. pic.twitter.com/OwMkzm9w0B