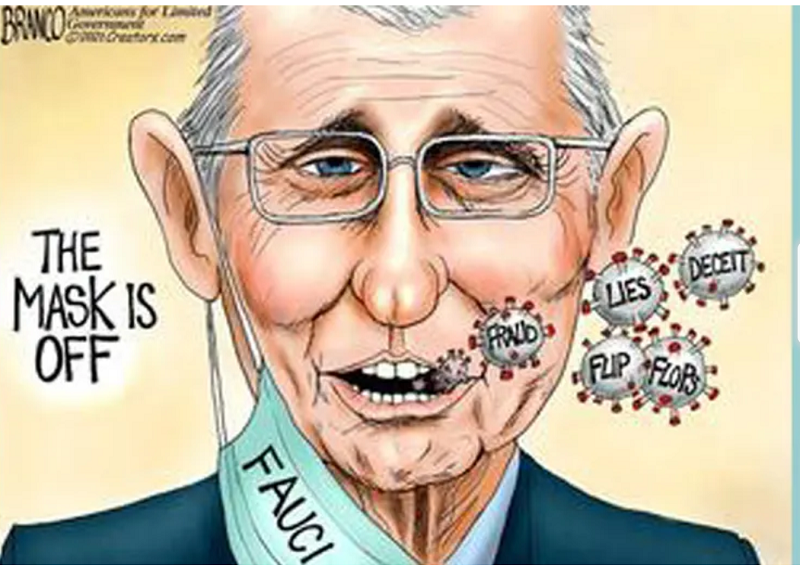 The “walls are closing in” on the criminal fraud of Fauci.  With justification, yes, but in reality, he’s just the scapegoat, the red herring deflecting attention away from those who perpetrated one of the greatest crimes against humanity in all history.

Let’s try a thought experiment. Imagine that the December 7, 1941 attack on Pearl Harbor happened – but nobody knew about it, it was completely suppressed by the media (radio and newspapers, no TV then) who reported it as a series of tragically accidental explosions that destroyed all the Navy ships with such tragically unfortunate loss of life .

What do you suppose would happen when the public later finds out that Pearl Harbor was no accident at all, that it was a purposeful and horrifically murderous act of war by the Imperial Japanese upon America – which the media and federal government covered up?

Substitute this imaginary scenario with what’s been happening to our country and the whole world for the last 18 months, and it’s no thought experiment but reality – with the public right now in the first stages of learning the truth.

The truth being that 18 months ago, the Communist government of China purposefully and with malice aforethought began waging biological germ warfare upon the entire world — which the media and federal government has covered up.

What happens now?  What Skye talked about yesterday (Skye’s Links 6/03):

“The above raft of intel contains far more damaging information than the bits which might have leaked from the Wuhan Institute of Virology.

That raft will contain Wuhan airplane, train, and bus schedules which will conclusively prove that CCP officials knew that there was a pandemic rising in Wuhan, and that they carefully isolated Wuhan from the rest of China while allowing literally thousands of flights from Wuhan to the rest of the world.

The rage has barely begun.  If any TTPer knows a conservative Congressional or Senatorial staffer, encourage him to FOIA the NSA for Wuhan plane, train, and bus schedule information from October 2019 to January 2021 and for any data on police or security force interference with travel from Wuhan to the rest of China during this period.  This should be unclassified data, and hence available via FOIA.”

This evidence will soon be public knowledge – with stories about people in Wuhan welded shut inside their homes while 430,000 Chinese flooded into the US just in the month of January 2020 alone.  Hundreds of thousands more Chinese flooded into Italy, spreading their virus there, as happened from December 2019 through March 2020 all over the world.

This, while the Chicoms ordered its puppet WHO to declare on January 14, 2020, there is “no human transmission of the coronavirus.”

Much of this was known at the time but brushed aside.  So what’s next?  The Mother of All Backlashes, that’s what.

Twenty years ago (April 2001), the Chicoms captured a US spyplane and held its crew hostage (The Hainan Island Incident). In response, a completely spontaneous boycott of Chinese imports all across America sprang up. With nothing selling, WalMart had to halt their purchase orders. Sales resumed after the crew was released unharmed.

That’s a small firecracker compared to the neutron bomb about to wipe out the Chicom economy in a worldwide boycott of stuff that says “Made in China.”  Realize that China doesn’t export much of anything that’s necessary like food.  Most everything they sell to the world is discretionary, meaning you can put off buying their latest gadget, or buy a shirt made elsewhere like India or Thailand – or how ’bout the USA?

As the National Interest journal reports: China’s Economy Remains Dependent on Exports.  This is the Chicoms’ Achilles Heel.  When millions of people understand that the Chinese Communists purposefully killed millions of their fellow human beings around the world waging germ warfare against them, a world boycott of China happens.

A snowball of condemning info is rolling downhill now gaining size and speed. From the Daily Mail this morning (6/04): Chinese military ‘engineered mice with humanized lungs’ in 2019 to test viruses on them – just months before the pandemic erupted.

All this will max out what Tom Lifson discussed in TTP on Tuesday (6/01): China’s Xi May Be Screwing Up Worse Than Biden.  Emperor Xi will then lose the Mandate of Heaven.

POTUS expressed it this way yesterday (6/03):

And what about China Zhou?  Isn’t he the guy who rabidly condemned POTUS’s ban on flights from China to the US at the end of January 2020 as “xenophobic”?  The guy who’s Beijing’s puppet being Chicom blackmailed for the tens of millions in crooked bribes he took with his coke-head son as proxy? Yeah, that guy.

The guy who’s doing everything he possibly can to ruin everything decent and positive about America?  The guy who utters divisive idiocy like “Terrorism from white supremacy is the most lethal threat in America”? Yeah, that guy.

I am certainly not alone in being totally sick and tired 100% fed up with this evil fascist treasonous demented dirtbag scheisskopf.  I will be joined logarithmically in the coming weeks and months by those who will feel the same way.  Especially when double digit inflation is baked in the cake with millions struggling to buy food and put gas in their car to get to work.

It’s hard to see how he can last more than six months even with his First Witch propping him up. Dem problem is, Heels Up has a two-digit IQ, is a robotic Marxist and impossible to like.

The Dems’ may go flip-out desperate getting us into a war with, say, China in the South China Sea, or stage a Reichstag Fire and blame it on “Trump’s white terrorists” – or they may just retreat into Depression City and give up in ’22 and let the Trump GOP clean their clock.

Either is possible (I vote for Door #2) but whichever, the reaction to their dilemma will be extreme.  What to do in the meantime? Get thee to a Red State with a Castle Doctrine. 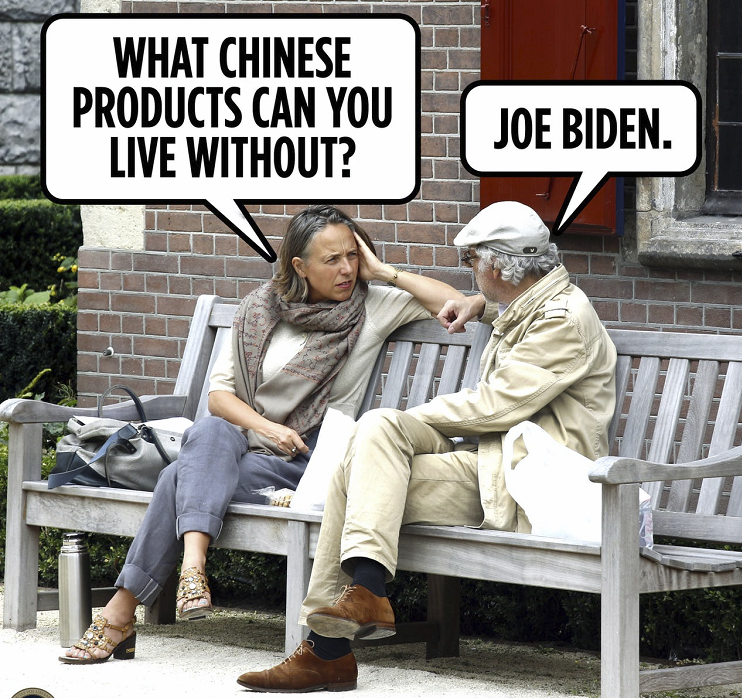 So – what else of interest went on this week? Here’s a selection.

Headline of the Year?  The Award for Worst Political Strategy in History Goes to Republicans Who Sided with Communist-Democrats in Stealing 2020 Election

Now Vladimir Putin is the world champion of American human rights while America’s Fake President is their greatest denier.  Putin will be eating Pussy Zhou’s lunch when they meet in Geneva on June 16.

Vlad is to be hailed for this.  You won’t believe how our fascist Dems have created an American Gulag in Washington DC with horrifying treatment of January 6th political prisoners: The Jail Conditions for January 6 Detainees. Complete police state denial of habeas corpus

Warning Alert – Backfire of the Year Coming. Letitia James and Cy Vance are painting bullseyes on their backs.

The great restaurant price hike: Eateries across the country are raising prices after soaring inflation sees ingredients costs DOUBLE in just one year

How sad, how mysterious – the latest in a series of unfortunate events to befall Mullah Iran.

Message to Armed BLMers: There will come a time when you are shot dead on sight like mad dogs.

Armed Black Supremacists in Tulsa: ‘There Will Come a Time When We Will Kill Everything White in Sight’

WATCH: Clarence Thomas HILARIOUSLY Cracks Jokes With TMZ Reporter, And The Video Will Make You Smile From Ear To Ear

Is this guy cool or what?

There’s no doubt, though, that the coolest state this week is Texas…

It’s about time – we need a nation of Sheriff Arpaios putting illegals in camps like he did.

Texas AG Paxton: ‘Only Reason’ Anyone Would Be Against Voter ID Is to Allow Cheating

The above is a must-read on what Gov. Abbott is doing to protect the citizens of his state from the several hundred thousand illegal aliens flooding his state due to Traitor Zhou.  For this, the Governor of Texas is the HFR Hero of the Week.

We close with the week’s most uplifting announcement.

In response to Zuck ordering Facebook to continue banning the rightfully-elected President of the United States, POTUS issued this today (6/04). Not if but when.  “Next time I’m in the White House.”

Meaning he’ll play the lead role in guiding his party to gain both the House & Senate in ‘22, and be in charge of both to stymie and run roughshod over the Dem Hate America agenda. He makes it clear that 45 intends to be 47 in ’24. There is always hope for America. 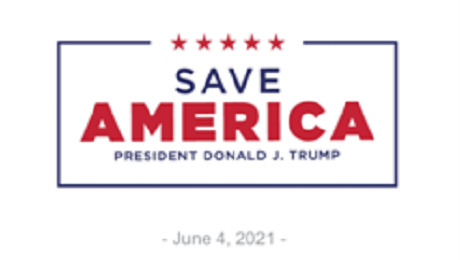