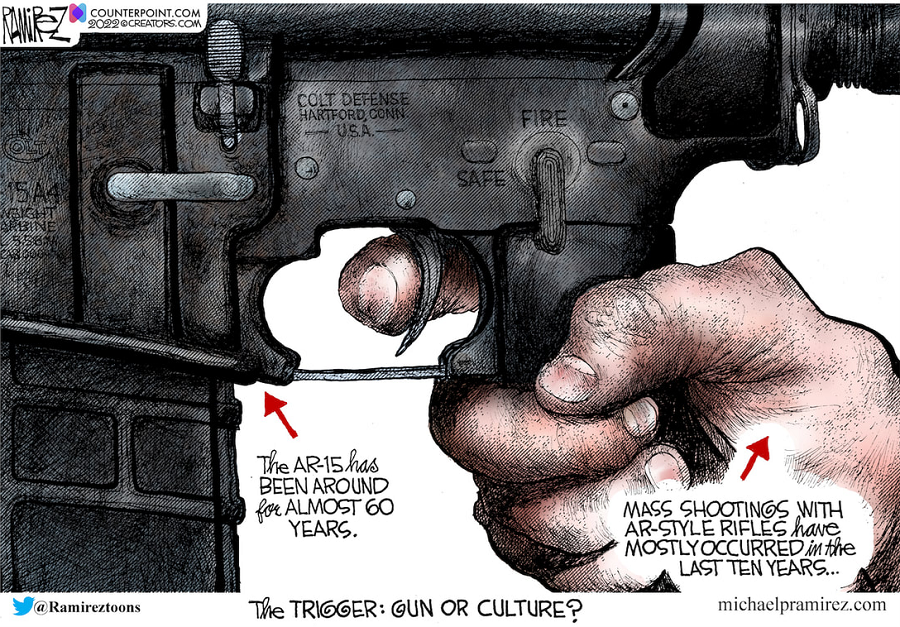 On July 14, 2016 in Nice, France, a Moslem terrorist named Mohamed Lahouaiej-Bouhlel deliberately drove a 19-ton cargo truck into crowds of people celebrating Bastille Day, killing 86 and hospitalizing 458.  Yet there was no clamor of demands by French politicians nor the French media for a ban on “assault trucks.”

There was no shrieking demand in all Africa nor the world after the 1994 Rwanda Genocide, when up to 600,000 Tutsis were slaughtered by machetes, for a ban on machetes.

The old cliché that “guns don’t kill people, people do” is still true and now more than ever, as the Dems desperately search for a diversion away from disaster at the polls five months from now.  How gin-clear can it be with headlines like this last night (6/02): Joe Biden Says Radical Gun Control Should Be ‘Central’ to Voting in November?

How more hysterically demagogic can DDs (Desperate Dems) be when they scream:  “Republicans are on the side of killers of our kids”?

Trying to gain votes over the graves of children could possibly be ameliorated if they were proposing laws that would actually protect schoolchildren from killers – like Ohio is doing:

“Ohio Gov. Mike DeWine plans to sign a bill reducing training requirements for teachers and other staff to carry guns in schools https://t.co/w80EyS28zF

This is no surprise, as you and I well know that Democrats and the Left are advocates of fascism not freedom, and that a disarmed citizenry is a necessary condition to achieve the fascist power they crave.  And next November, any ability to have that power will be rudely ripped from their smarmy hands without a massive diversion.

Enjoy watching the Congresslady from Rifle, Colorado, Lauren Boebert, eviscerate the Dem gun control mania on the floor of the House yesterday (6/02).  Prepare to stand up and cheer:

A diversion from what electoral doom?  How about $1 an egg?  Not one dollar for a dozen or even a half-dozen eggs, but one dollar for one egg.  Any farmer knows that fuel, electricity, and fertilizer account for some 50% of what it costs to produce food – and that today’s sky-high grocery store prices are based on the last harvests.

Wait ‘till prices from the new harvests this spring/summer/fall hit with diesel fuel for tractors and trucks doubled, fertilizer costs tripled, and that for electricity to run irrigation well pumps goes through the roof.  No wonder we have reports like this on Wednesday (6/01): Get Ready for $1 Per Egg: USDA Forecast Predicts Highest Food Inflation Since 1980.

Imagine voters paying 50-60% for food on their table and gas in their car more than now on Election Day?  And they know who to blame – the Dems, because they are bragging about it.

On Memorial Day (5/30), The Impostor under his own name wrote an op-ed in the Wall Street Journal: My Plan for Fighting Inflation.  It’s not possible to overstate how disingenuously delusional it is.  Brace yourself.  After lie upon lie about how good, great, and ab-fab (absolutely fabulous) our economy is thanks completely to him, he uncorks this:

“With the right policies, the U.S. can transition from recovery to stable, steady growth and bring down inflation without giving up all these historic gains. During this transition, growth will look different. We will likely see fewer record job-creation numbers, but this won’t be cause for concern. Rather, if average monthly job creation shifts in the next year from current levels of 500,000 to something closer to 150,000, it will be a sign that we are successfully moving into the next phase of recovery…

We need to take every practical step to make things more affordable for families during this moment of economic uncertainty—and to boost the productive capacity of our economy over time. The price at the pump is elevated in large part because Russian oil, gas and refining capacity are off the market…  That is why I led the largest release from global oil reserves in history. Congress could help right away by passing clean energy tax credits and investments that I have proposed.”

Got that?  We will transition to a collapse of job growth, gas prices are all Putin’s fault, and he will continue to make every effort to do nothing to increase fossil fuel production in America, but rather every effort to block and stymie it.

This in the face of the US Bureau of Economic Analysis reporting the US economy shrank -1.5% in the 1st quarter of 2022, and heading for more shrinkage in the 2nd.  As Fox reports, “This is catastrophic for Joe Biden and the Democrats”:

The 2nd quarter numbers, just in time before the election, will be a “massive train wreck.”  Gallup polls that 83% are unhappy over the direction the Dems are taking our country.  It’s a must-watch report – which I must disagree with on one point: the claim that Xiden and his people are clueless.  No – they know exactly what they are doing, all of this is on purpose, to purposefully rubbleize our economy so they can control it.  Power is their goal, not prosperity.

So how do the Dems possibly think they can do all this and retain monopoly power on Capitol Hill in November?

You guessed it – the same way they stole the White House two years before. On Wednesday (6/01): Elections Security Watchdog CISA Blows the Whistle on Serious Vulnerabilities in Dominion Voting Systems Machines.

“It’s 2022. Two years after one of the most hotly contested elections in U.S. history. And elections security “watchdog” the Cybersecurity and Infrastructure Agency, also known as CISA, is finally admitting what many have known all along: Dominion Voting Systems has serious election security vulnerabilities.”

Of course, as a fed agency under the DHS, it will blow no whistle at all on Dominion voter fraud.  In fact, Sundance at CTH smells a CYA rat:

If there is one thing the Deep State and its media outlets must do is derail any proof that Dominion machines were/are rigged for voter fraud.

So I behoove you to check if Dominion machines are used in your state or district, then contact TrueTheVote to ask what can be done about it.

At last, the media’s 24/7 fixation on some actor vs. actress defamation trial is over.  Do you know anyone who cared about this?  My wife and I sure don’t.  However, ace constitutional law professor Jonathan Turley has a very enjoyable take on it:

The Depp Trial and the Demise of the ACLU. This is great news:

“The emergence of the ACLU at the heart of one of the most sordid celebrity trials in history is the final measure of the decline of this once celebrated civil liberties group… In the Depp-Heard trial, the ACLU finally hit the rock bottom as an organization in free fall. It ultimately was the reputation of the ACLU, not Depp, that suffered the most in the trial. Ironically, for critics, Amber Heard became the fitting face and ambassador of the ACLU: conflicted, confused, and corrupted.”

Now, starting on Wednesday (6/01) and for the rest of all June, we must endure being swamped by ubiquitous promotions, endorsements, and preening over “Pride Month.”

Okay, if one chooses to be L or G or B or T or WTF, they have a right to that choice and to be proud of it.  Fine.

Thus, TTP is declaring that June is also Straight Month. 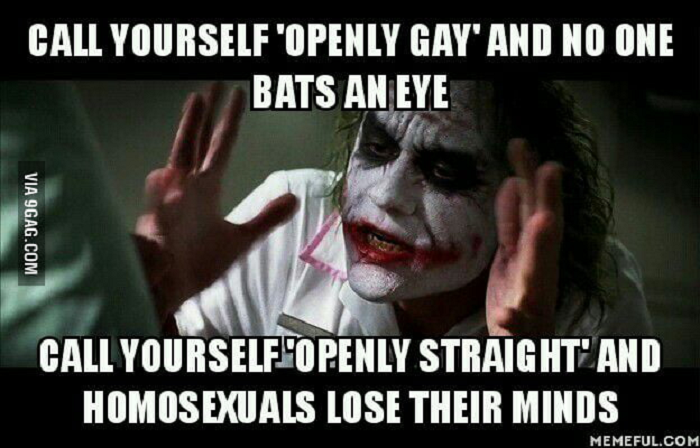 I don’t really know – but what I do know is that it’s Okay To Be Straight and that we all should: 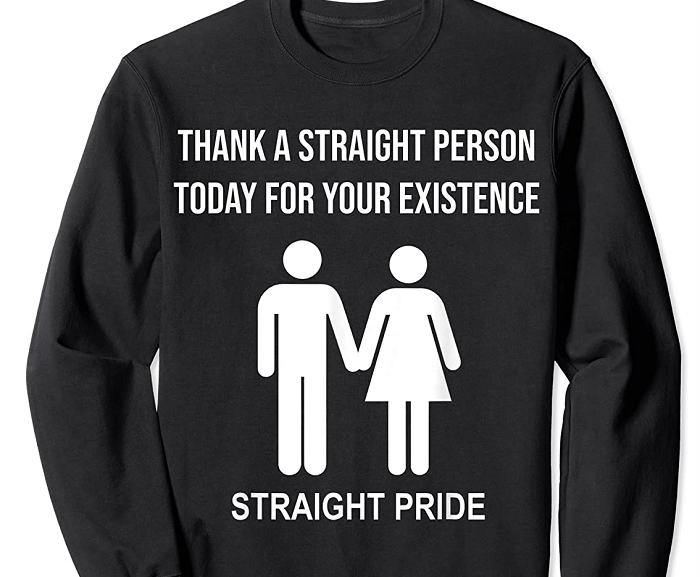 None of us would be here otherwise! 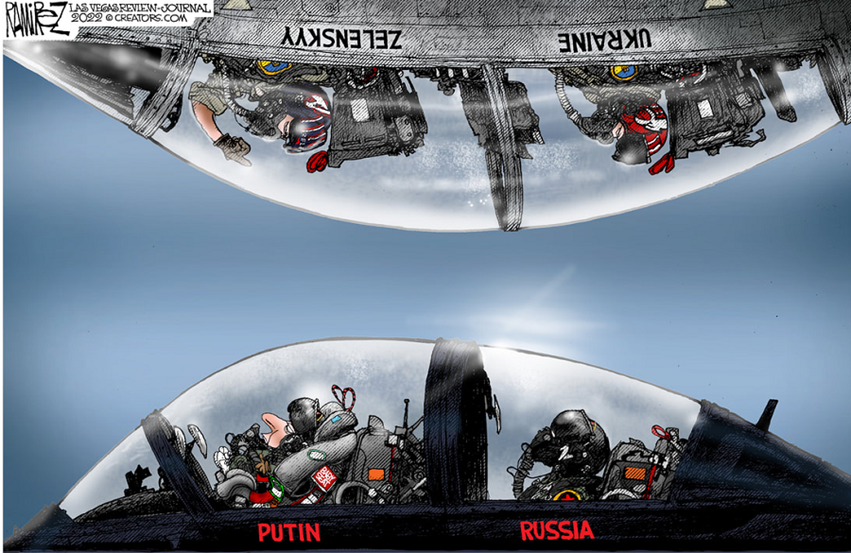 There is no excusing this.  Anyone morally depraved enough to do so, thoughtlessly repeating Kremlin/KGB propaganda like a mindless parrot, is no different than a Holocaust Denier approving of Hitler’s putting millions of Jews in ovens.  No different.

Last week (5/23), veteran Russian diplomat Boris Bondarev resigned his post at the UN offices in Geneva. In his resignation letter made public, he stated:

“For twenty years of my diplomatic career I have seen different turns of our foreign policy, but never have I been so ashamed of my country as on Feb. 24 of this year. The aggressive war unleashed by Putin against Ukraine, and in fact against the entire Western world, is not only a crime against the Ukrainian people, but also, perhaps most heinous crime against the people of Russia, with a bold letter Z crossing out all hopes and prospects for a prosperous free society in our country.”

As Ramirez portrays it: 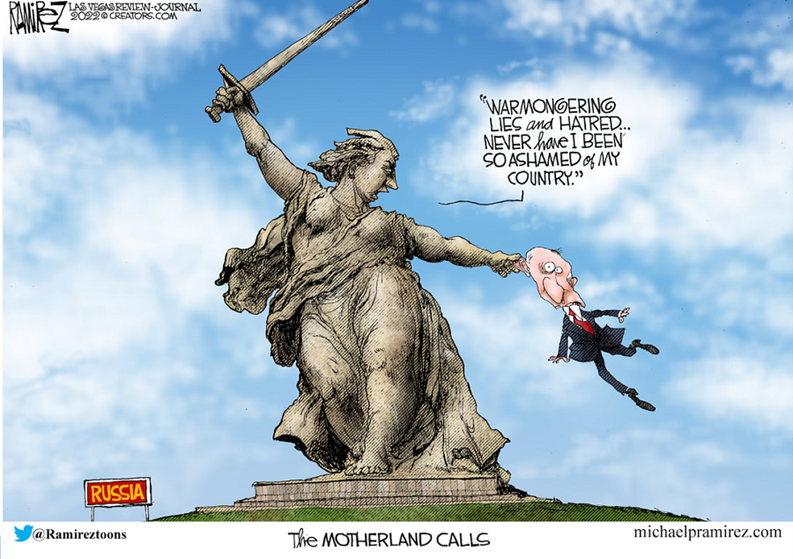 No one calling themselves a conservative, an American patriot advocating liberty and moral decency can be on Putin’s side on this, and not Zelensky’s and Ukraine.   Any such person has no place on TTP.

And just so you know, Ukraine is not losing this war, it is winning and shall continue to do so until not a single Russian soldier remains on Ukraine soil unless he is buried in it. 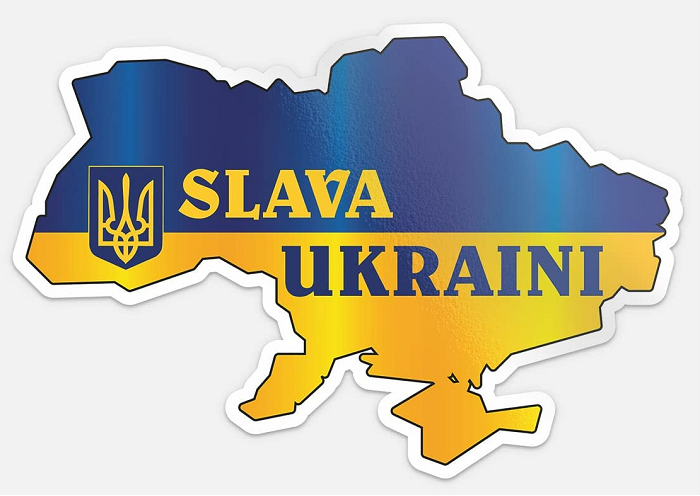