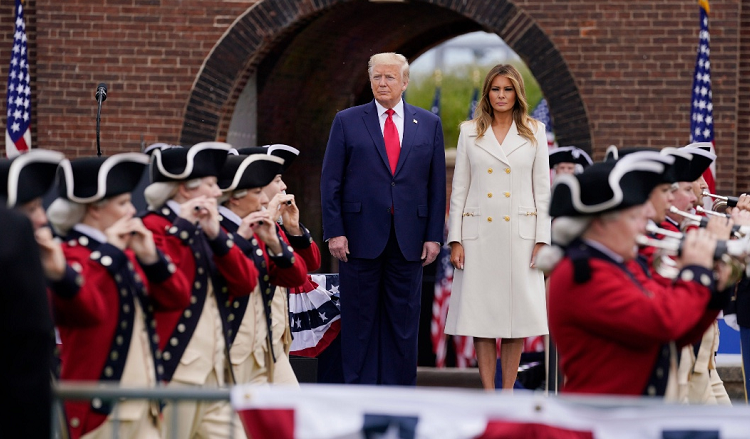 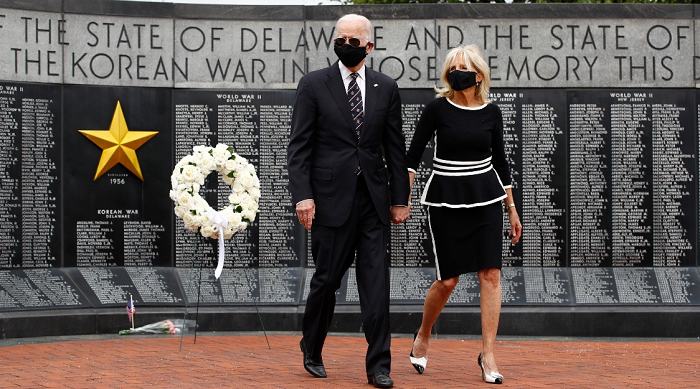 These two pictures of Memorial Day Commemoration on Monday (5/25) have starkly contrasting messages.  The one above projects courage to live without needless fear, the one below projects the necessity of needless fear.

Patricia McCarthy in her The Mask Police of the Left this week (5/27) notes that we didn’t have this virtue-signalling tyranny when the Chicom-Democrat-Media Virus was at its peak.  Now that we’re opening up and we know it’s no more or even less lethal than seasonal flu, all of a sudden everyone has to wear a mask. Why?  Because: 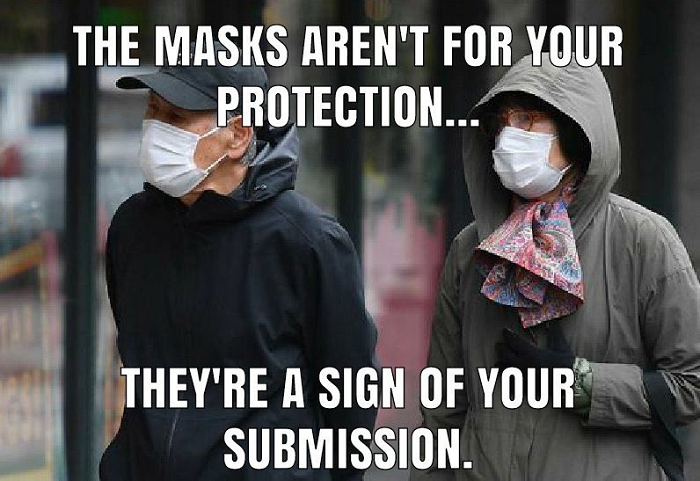 Mask-wearing is a constant reminder that we must continue to live in fear, we must stay afraid, we cannot live normal lives anymore.  People living this way is the Dream of Democrats, Fascists, Communists, all those on the Left who live for controlling the lives of others.

The grotesque irony is that all these masks such as those pictured, much less ones of cloth, are useless.  As Skye points out on the Forum, real mask protection is only provided this way:

“Commercially available N95 masks (and some others) have a filter element comprised of permanently electrically charged non-woven polypropylene fibers (such as 3M’s Filtrete) that can trap particles far smaller than the passageways between the fibers.

Moreover, the problem isn’t primarily free floating individual virus particles; it is vastly larger (mostly many microns in diameter) aerosol particles containing viruses that are produced by talking (especially loudly), coughing, and sneezing.  During a cough or sneeze, the mask is blown away from the face, and aerosol escapes around the edges, but if you are wearing a properly fitting mask, you will be protected from someone else’s cough or sneeze.”

So if you are around 70 or above – and have a pre-existing health condition like morbid obesity, diabetes, or cardiovascular disease – then you should consider wearing such a mask when you’re around people out in public.  For everybody else, the odds of dying if you don’t are not much more than dying from the common flu.

There are exceptions, however – as POTUS thoughtfully pointed out: 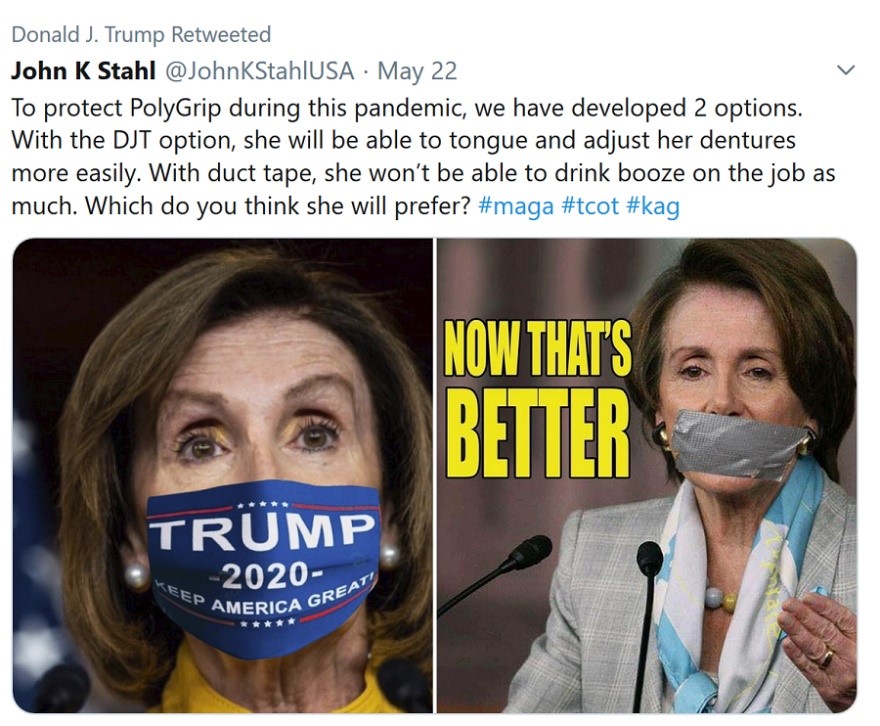 For the rest of us: 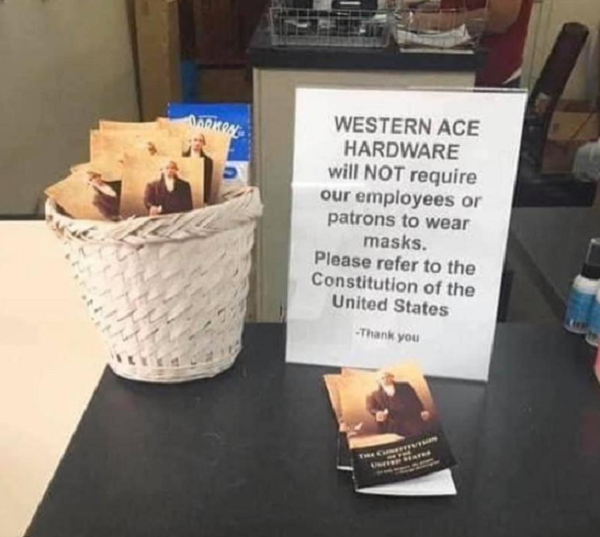 A TTPer dear friend of mine in Australia sent me this to share with you this vivid analogy of how insanely costly the Lockdown Strategy has been.

“The wildebeest of the Serengeti migrate every year in search of food to survive. When they reach the Mara River, the crocodiles are waiting. They know this and they know that a few will be lost for the good of the herd and its survival — and then they cross the river anyway. They have successfully used this survival strategy for millennia and continue to flourish.

Implementing lockdown is like putting up a fence to prevent the wildebeest from crossing the Mara River to save those few that would be eaten by the crocodiles, and as a result, the whole herd is at risk of starvation.”

We’re supposed to be smarter than wildebeest – smart enough to protect the old and sick from crocodiles, while letting the rest of us alone to flourish. But the Democrats and the Enemedia have infected so many of us with a virus of fear that we are forced to learn a life-lesson at frightful cost:  That panic-fear makes people stupid – individually and collectively.

There’s a further lesson:  that Democrats want us to be fearful and stupid.  What better way to make people want to be controlled by them and their government edicts?  The trick is, how can they keep the fear and submission going all the way to November 3rd? 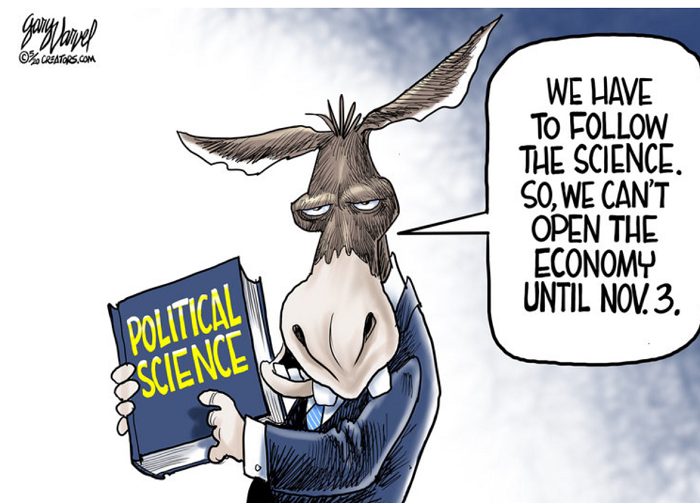 The answer is:  They can’t, not even close.  It turns out that we are rapidly headed for a massive economic boom that will be in full steam well before Labor Day – a V-shaped recovery arriving in time to sweep the Dems off the map on Election Day.  So much so all the Dem Party honchos are in the panic-fear they want us to be.

How do I know this?  Well, it’s the Dems saying this, not me.  Ever hear of Jason Furman?  He was President Obama’s chief economic advisor as the Chairman of the White House Council of Economic Advisers, and is now Professor of Economic Practice at Harvard University.

On Tuesday (5/26), the left-wing webzine Politico ran an interview article on him, entitled The General Election Scenario the Democrats Are Dreading.  The money quote of Furman’s causing Dem dread:

“We are about to see the best economic data we’ve seen in the history of this country.”

As Politico explained about their interview with him:

“Instead of forecasting a prolonged Depression-level economic catastrophe, Furman laid out a detailed case for why the months preceding the November election could offer Trump the chance to brag — truthfully — about the most explosive monthly employment numbers and gross domestic product growth ever.”

It will be a V-shaped sharp recovery like after a natural disaster, not a prolonged grindingly slow one after a Great Depression, Furman says.  The whole thing is a must-read – it’ll make your day.  The killer quote comes from an Obama alumnus queried by Politico:

“’This is my big worry,’ said a former Obama White House official who is still close to the former president. Asked about the level of concern among top party officials, he said, ‘It’s high — high, high, high, high’.”

In other words, the Dem elite is publicly admitting that they don’t want America to recover economically, for people to get their jobs back, for prosperity to return, as that would be electoral disaster for them.

As the Red States are opening up with jobs and businesses coming back – while Blue States stay in fascist lockdown and economic devastation – and with a dropoff of CDM Virus cases/deaths in the former but not the latter, millions of voters are already getting the picture.  By October it will be overwhelming.

Want more sunshine on your day?  Here’s how we can be abundantly confidant of the coming ”V.”  POTUS has done something truly revolutionary in US government political history.  “Never let a crisis go to waste” has always been code – for Pubs and Dems alike – to expand  government, never to contract it, to increase control over our lives, never to increase freedom instead.

It’s literally unprecedented for a President to choose the latter instead of the former between these two alternatives.  Yet that is exactly what President Trump has done, by issuing a Presidential Executive Order on Regulatory Relief to Support Economic Recovery.

Actually, there is a precedent.  When he became President, Trump’s biggest worry was how to get the massive regulatory and tax reduction he knew was necessary to jump-start the economy past Pelosi’s House and a maniacally-opposed enemedia.  Then the Russia Collusion Hoax erupted.

The injustice of it infuriated him, yet part of his constant bellowing about it on Twitter and everywhere else was for show.  He had the emotional intelligence to use the danger as an opportunity – to realize the more he bellowed, the more the media would be fixated on Russia-Russia as a distraction from what he was doing to drastically reduce government regulation right under their noses.

That was his “magic wand” to bring back all those jobs Zero said were lost forever.  Now he’s doing it again.  Here’s his comment at a White House Cabinet meeting signing the EO:

This is pro-freedom political genius at work.  We should all be awe-struck.

As Andrea Widburg explained yesterday (5/28) in Trump’s Trap for Twitter, that genius was also at work this week by signing an Executive Order Preventing Online Censorship.

Early today (5/29), Twitter called what they believe is POTUS’ bluff.  He sent out a tweet in two parts.  Here’s the first:

The second part was blatantly In-Trump’s-face censored.  You have to click further to retrieve it: 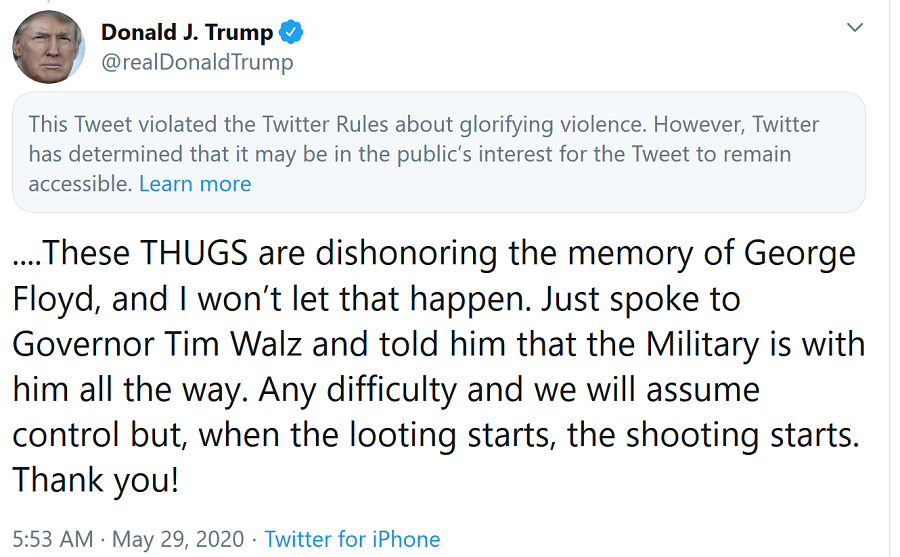 So Twitter censors the President of the United States for “glorifying violence” by wanting to reduce or stop the violence.  Makes perfect sense if you think there’s no way for him to enact his EO as it requires an Act of Pelosi’s Congress to do so.

But it doesn’t.  As he responded:

The key words are: “Until then, it will be regulated.”  A TTPer lawyer explains:

“No one has to change Section 230 or change the law at all, by legislation or otherwise.

Whether a given company qualifies for protection under 230 is a standards-based question.

Barr and Trump are saying their behavior makes them ineligible for the 230 protections under the law as written.

Say goodnight, Twitter.  That Facebook’s Mark Zuckerberg is smarter to play CYA than Twitter’s Jack Dorsey is made clear:

About those still on-going riots in Milwaukee, and now spreading to Denver, Los Angeles and elsewhere.  On the pro-riot hashtag #ICan’tBreathe, this was provocatively posted: 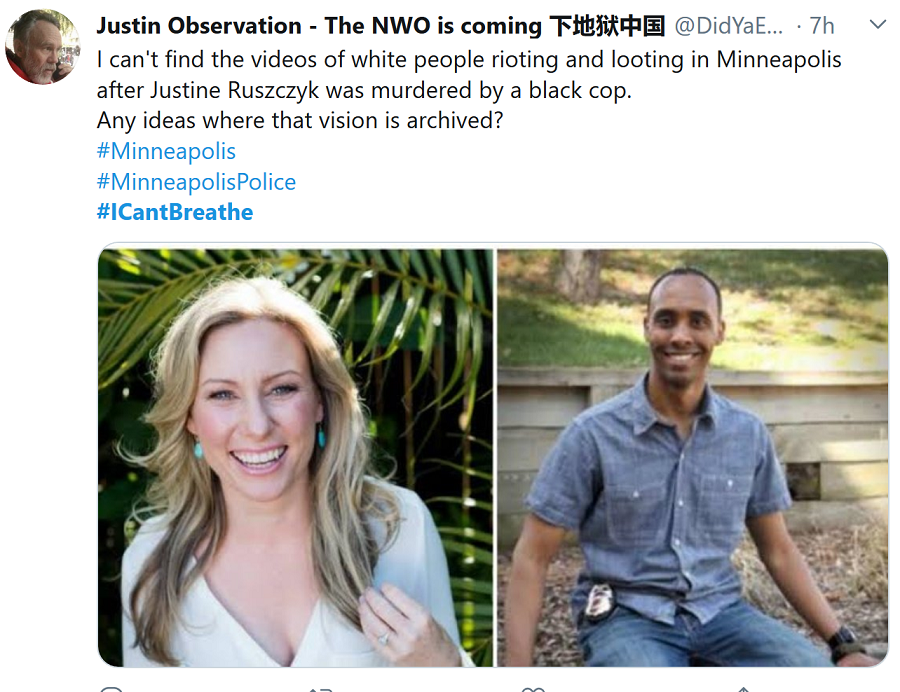 On July 15, 2017, a Black Moslem Milwaukee police officer named Mohammed Noor shot without provocation or warning Justine Ruszczyk point blank dead in her chest.   In April 2019, Noor was convicted of third-degree murder and manslaughter, but acquitted of intentional second-degree murder. In June 2019, Noor was sentenced to 12.5 years in prison, where he remains today.

Justice was served with Noor in jail and the City of Milwaukee paying her family $20 million in compensation – with no riots, looting, or property destruction whatever.

Today (5/29), Minneapolis cop Derek Chauvin who knelt on handcuffed black man George Floyd was charged with 3rd degree murder, manslaughter.  Will that stop the violence, will looters who continue have to be shot as looters traditionally are, will celebs shut up about “Racist America”?  Not likely.  The wages of White Liberal Auto-Racism – America’s true racist curse, white self-hatred – must be paid.

HFR Hero of the Week has to be White House Press Secretary Kayleigh McEnany.  Here she is yesterday (5/27) shredding Fake Newser Jim Acosta to mincemeat:

HFR Joke Schmuck #1 of the Week is Never Trumper Jonah Goldberg.  As the NY Post explained (5/25):

“McEnany steamrolls, she dodges, she lectures reporters on the questions they should be asking. It’s that last point that riles some journalists. ‘Indefensible and grotesque,’ said Jonah Goldberg to Chris Wallace on Fox News…  To which Americans say: Stop whining!” 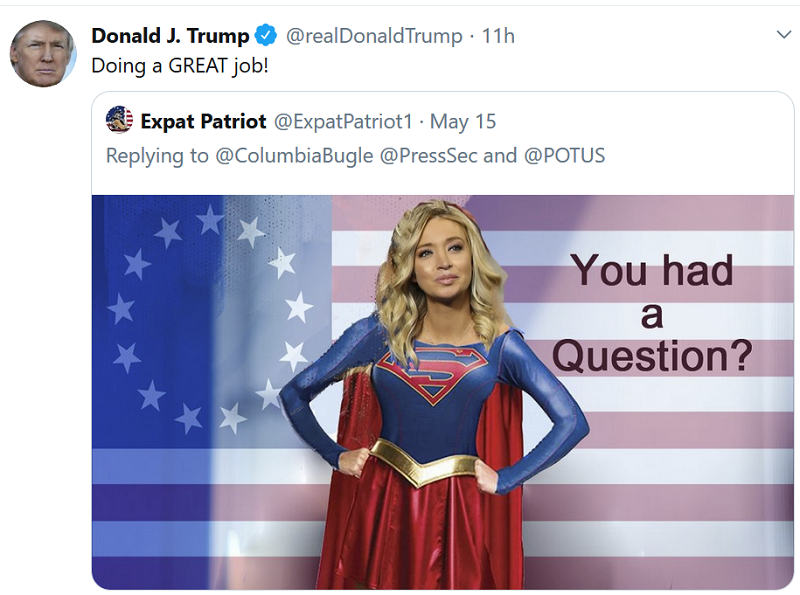 HFR Joke Schmuck of the Week #2 is the collapse of what used to be Ann Coulter.  She was talking about herself when on Sunday (5/24) she called the President a “complete blithering idiot” for not supporting Jeff Sessions in next Tuesday’s Alabama Senate primary.

Ann has not aged well.  She’s 58 now, never married, never had children, she’s become an irrelevant bitter spinster whom no one pays attention to anymore.  She was once clever, witty, and optimistic.  Now she’s shrewish, harping, and a real downer.  No one cares, Ann.  You brought this upon yourself.

We’ll close with this Alliance for Trump Tribute to Melania that TTPer Dan T.  and I are sure you’ll love:

And this from my TTPer Aussie mate with whom I agree: Charlie Kirk’s is the best explanation of why to vote for Trump you have ever heard.  Feel free to send it to everyone you know.