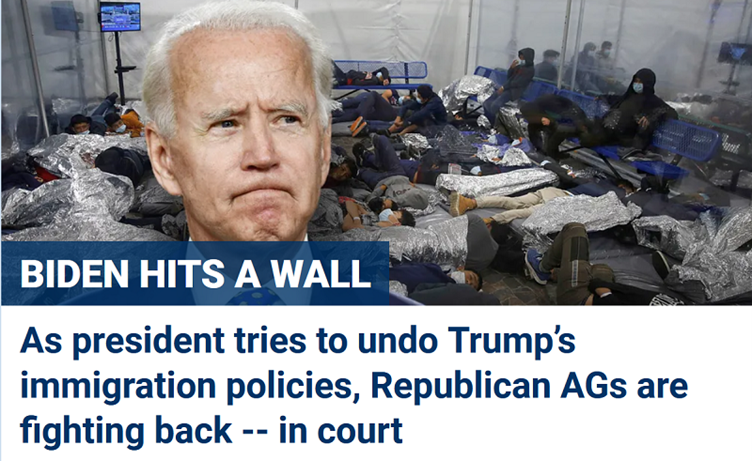 It has been a wonderfully terrible week for Notpresident Zhou Xiden. Above is last Sunday’s lead headline on Fox. Here is this morning’s (5/28): 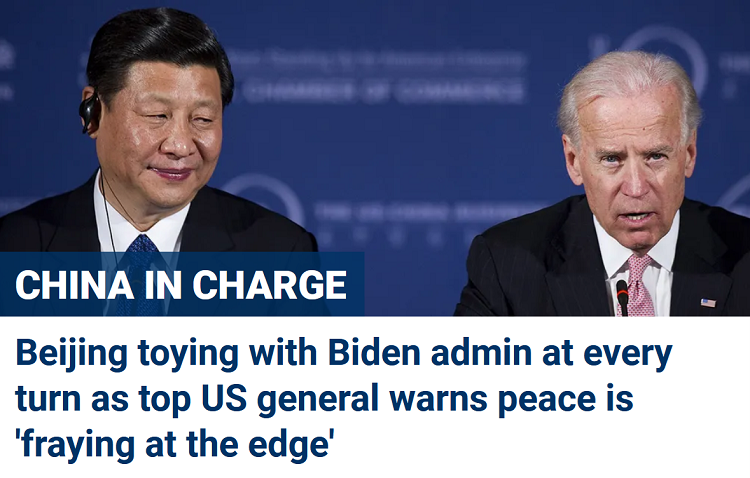 Yet this “China toying” story is only the tip of an iceberg poking above water.  You’re about to find out what TTP has been able to how much bigger the story is underwater.

************
All week long, the biggest headlines have been about the Chicom Virus originating in the Wuhan Virology research laboratory, rather than people eating infected bats in the Wuhan “wet market” selling wild animals.

The real story lying underwater with no headlines is the incredible sudden flip-flop: 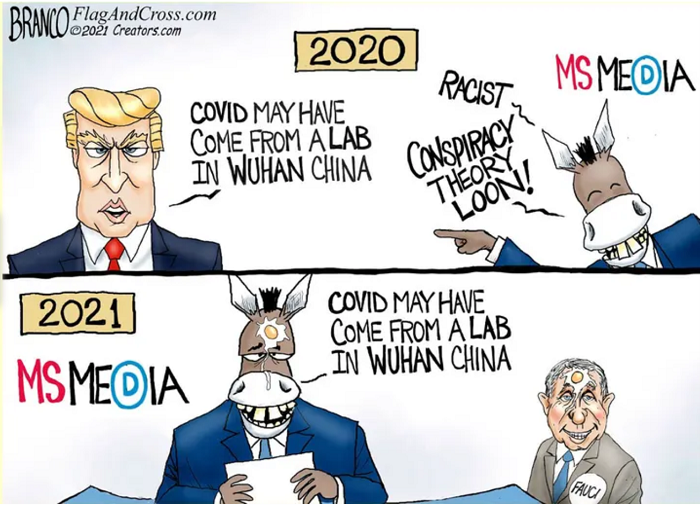 There are no huge headline stories asking Why The Flip-Flop?  It happened in the blink of an eye.  How come?

On Tuesday (5/25), Xiden cancelled Trump’s effort to find the truth: Pompeo-led effort to hunt down Covid lab theory shut down by Biden administration.

On Wednesday (5/26) – less than 24 hours of this cancellation, he reversed: Biden Orders U.S. Investigation of Coronavirus Origin After Canceling Mike Pompeo Effort.

Unanimously.  Every single Dem Senator, all 50 no exceptions, voted for arch-Trumper Josh Hawley’s bill.  This is no accident, comrades.  These guys got their order to march in lockstep – Chuck Schumer was just the messenger.  Who gave the order.  Who’s behind the Dem turn-on-a-dime flip flop?

Our intel guys, that’s who.  Here’s what TTP intel sources say.  No specific agency was mentioned, just “intel” – meaning it could be DIA (Defense), CIA, NSA, or what was implied, a joint effort by them and others.  Nothing recorded, these are my notes.

*The letter accurately states that a “pause” in this funding was issued on October 17, 2014, during the Obama-Biden administration, that contained an “exception” from the pause could be obtained on the basis of “national security.”

*What triggered the flip-flop this week were these two questions in the letter asked of Collins regarding the national security exception:  Who requested that the moratorium include this exception?  Who approved them when granted?

*The letter does not disclose the answers, simply reveals exceptions were granted, knowing that only someone very high up in the US national security chain of authority could sign off on them – certainly not Collins much less Fauci.

*Intel knows that an exception to gain-of-function research safety protocols was granted, allowing a much lower level of rubber gloves and surgical gauze masks as sufficient for blood-born viruses – rather than the much higher level when dealing with respiratory viruses carried in the air requiring clean rooms and full-face respirator masks or equivalent (see link for example).

*The letter cites the very well-researched study by science journalist Nicholas Wade of May 3 on The Origin of Covid. The study provides this Wuhan lab photo of lead bat virus researcher Zheng-li-Shi, a PR photo of her in a high-safety lab room while her coronavirus work was done in much lower safety lab rooms. 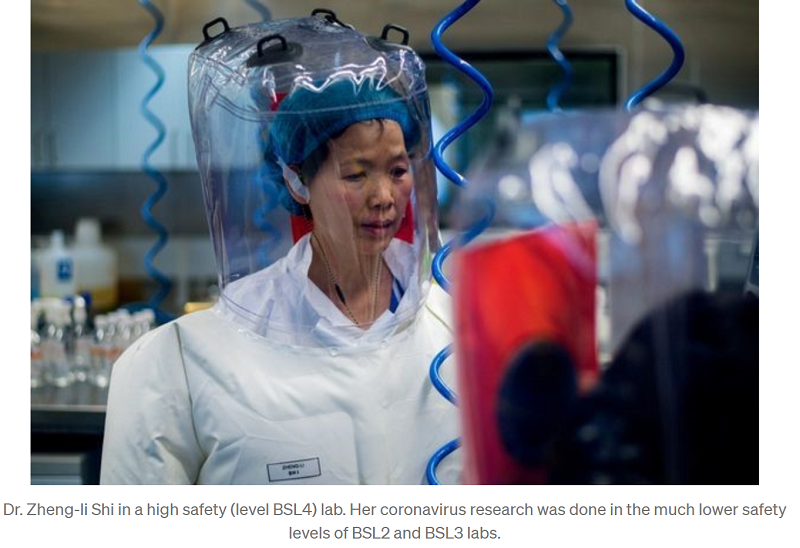 *The bottom line?  The intel agencies involved are blackmailing whoever signed the national security waiver at the request of the Chinese government.  That person’s signature is on the waiver and who must be in power and blackmailable now.

My source wouldn’t disclose who, but clearly, the most obvious suspect is Obama’s National Security Advisor at the time and now pulling Xiden’s puppet strings at the White House at the direction of Obama – Susan Rice.  Or it could be Xiden himself on orders direct from Beijing.

*Another bottom line.  Intel believes it’s very unlikely that the Chicom Virus was engineered and released on purpose – because Beijing had no vaccine for it in advance.  That it was by accident it escaped out of Wuhan lab and began killing people in the city.

Whereupon Beijing saw the opportunity to ruin Trump, ruin America’s and the world’s economy by sending tens of thousands of infected Chinese out of Wuhan to travel the world – such as to Italy and the US – while closing off those who stayed in Wuhan from the rest of China.  Their strategy succeeded.

Now our Intel people see their opportunity to override Beijing’s control of the US Notpresident with their control instead.  This scandal is far bigger than 9/11 –at least 10 times a bigger death toll, 3,000 in 9/11, 300,000 virus; or 100 times bigger given the world virus death toll of 3 million.

Whoever signed that waiver could be held responsible in the public’s eye for those hundreds of thousands, or millions, of coronavirus deaths.

The game will continue now with more and more info being leaked until the agencies have the increases in funding and power they want.  Butter up your popcorn and enjoy the show.

By the way, my source couldn’t help mentioning that Google, Facebook, and Twitter all got their initial funding from Langley and Fort Meade.  “What better way to spy on people than to get them to spy on themselves?” I was asked with a laugh.  “That’s the way Stassi did with East Germans – they did hardly anything but receive tips on people others didn’t like.  That’s lots of that in Facebook.”

Then with another laugh:  “There’s no way Zuckerberg could have written the original code for Facebook – he’s no real coder.  We gave it to him.  He’s cooperated with us ever since.”

At this point, my sources (actually more than one) needed to make clear that the individuals behind this weren’t loons like Brennan, and were genuinely afraid of the Chicoms’ threat to America – “This is their country too!” – and increasingly so over Comrade Zhou’s threat as well.

“They are far more aware than the public of what this guy [Xiden] is going to do to their own personal cost of living, and everyone else’s,” I was told.  “They are realizing they made a Big Mistake allowing him to steal the election in ’20 – so they won’t allow it in ’22. No way.”

Which is why yesterday’s (5/27) NY Post cover on the leak of his crooked dinner was no accident: 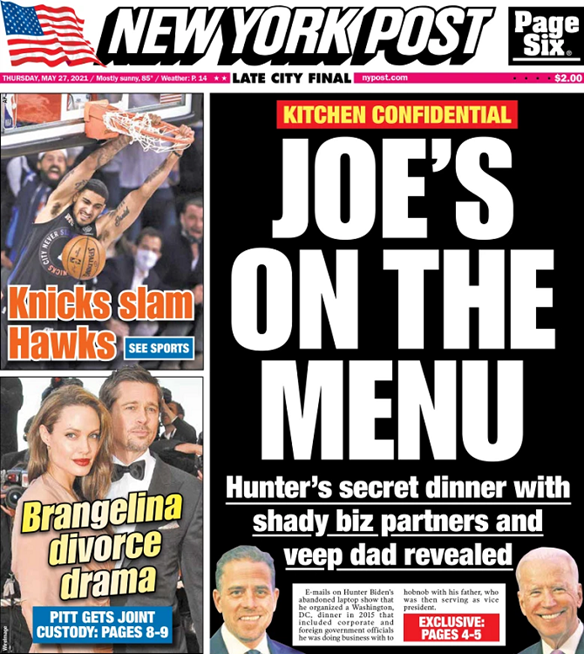 As it is, our economy is going to be so trashed by next year’s elections the Dems are going to need vastly more cheating to replicate last year’s.  It won’t work, as they’ll be pushing on a string.  So the NYPost cover today was no accident either: 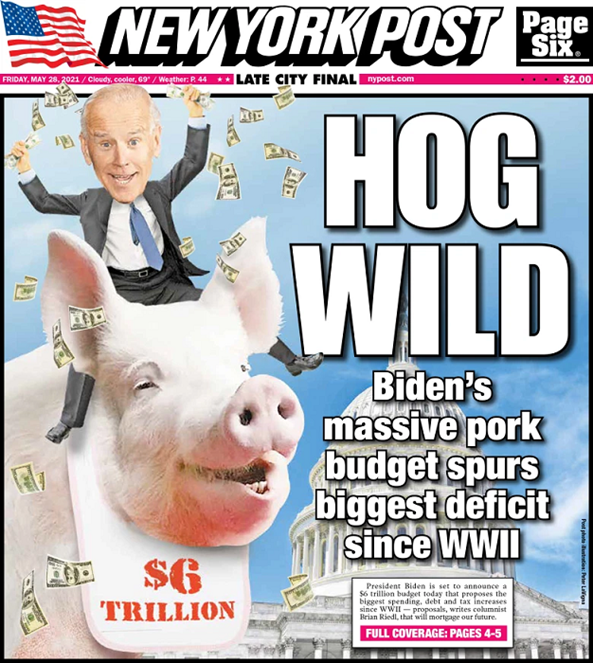 Skyrocketing inflation that wages can’t keep up with is already baked in the cake, as Zero Hedge reported on Wednesday (5/26): Here Comes The Hangover: Soaring Prices Result In Record Crash In Home, Appliance Buying Plans. 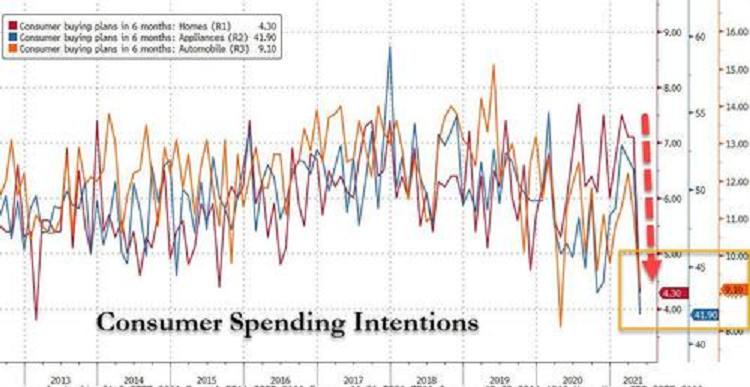 Will the Intel folks side with the GOP to make sure Comrade Zhou’s $6T lunacy is DOA?  They say they will.  We’ll see, but signs are promising.

What else is promising this week?  Here’s a short compendium. 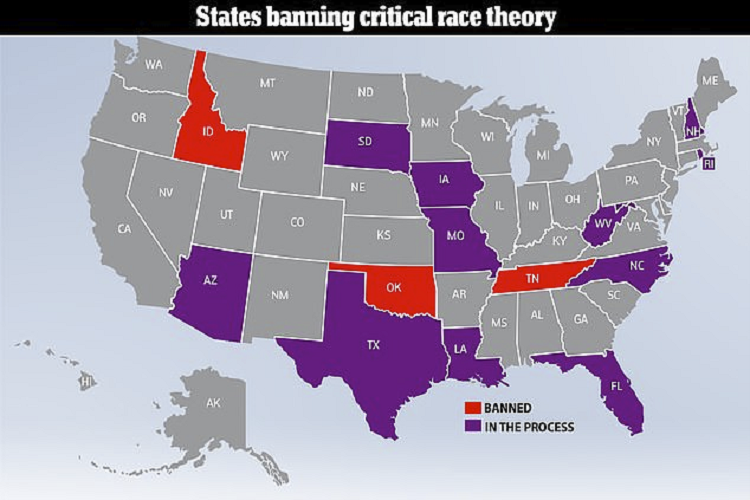 State Treasurers Send Message to Banks: If You Drop Coal, We Will Stop Using You

“Over a dozen Republican state treasurers sent a clear message to financial institutions Tuesday, threatening to pull their assets if they “de-bank” fossil fuel firms. Collectively, they control hundreds of billions of assets.”

CNN’s Ratings Go Down the Toilet, Tumbling Over 70 Percent Since January.  Schadenfreudelicious!!

35% of Americans unwilling to spend $1 to fight climate change. Half of all America wouldn’t spend 10 bucks.  Good luck on selling this hoax as justification for $7 gas, Comrade Zhou. Oh, $7 gas?  That’ll be cheap by fall.

Biden Disinvited to Address Notre Dame Commencement Because He’s So Pro-Abortion.  The Liar-in-Chief said he couldn’t attend due to a “scheduling conflict.”  Right.

TTPer Gavin from Down Under sends us this. What an embarrassing contrast to the Girlie Men running our Pentagon today.

Instant Karma!  Black guy tries to carjack, driver doesn’t hesitate, swerves into him with precision, avoids hitting a tree, hits the accelerator to smoothly get away.  That’s the way it’s done!  Happened in Florida, video released this week.

The Laugh of the Week.  It sure will, Liz – you are going to be obliterated.

Liz Cheney: My Re-Election Will Be a Referendum on the Republican Party

Finally. This today (5/28) from a disgusting charlatan who hasn’t the brain cells left to remember the founding words of the country he pretends to lead:

Okay, that’s wrap.  We close with POTUS’ message to us for Memorial Day Weekend. 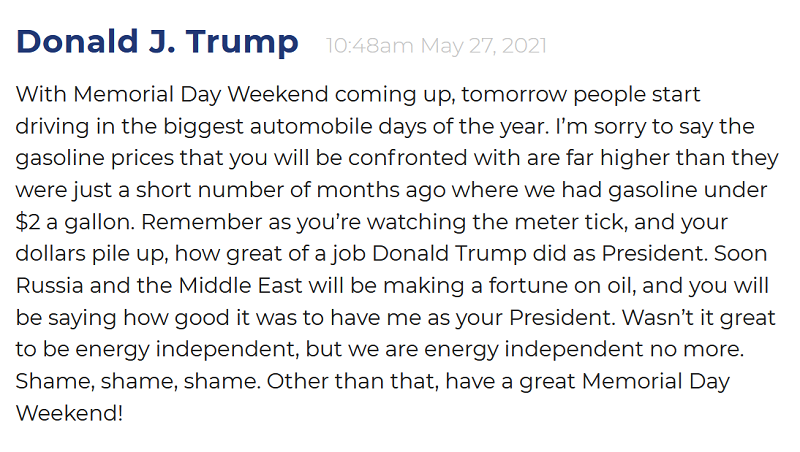 Just remember and never forget what we memorialize of Memorial Day.  I’m sure you will. 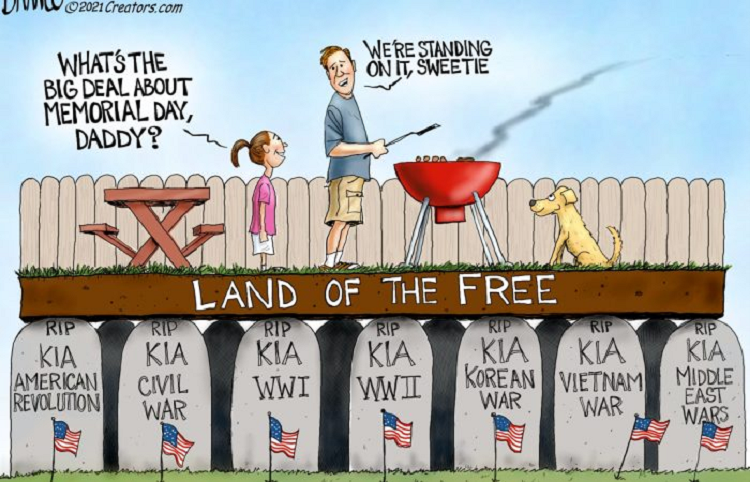