We’re Not Gonna Take It Anymore is now America’s Response to the Fascist Lockdowns:

How, then, is Not Taking It Anymore being implemented?  There are several ways.

For former New York LtGov Betsy McCaughey, Civil Dissent Is the American Answer to Outrageous Lockdown Rules, as she wrote in the NY Post on Wednesday (5/20).

It’s a major part of the answer, yes, — the more Reopen Rallies and Anti-Lockdown Protests the better.  The more civil disobedience the better, people refusing to obey fascisti orders to stay inside or keep their business closed.

One hero in this regard is 77 year-old barber Karl Manke in Owosso, Michigan, who kept his barbershop open in defiance of Wretched Gretchen Whitmer’s order.  She got her wacko-left AG Dana Nessel to issue a cease-and desist order, a temporary restraining order, and suspension of his haircutting license.  Yesterday, Circuit Court Judge Matthew Stewart ruled against Nessel, keeping Manke in business.

When interviewed by the press after the judge’s decision, Manke looked into the cameras to say, “I have a message for Governor Whitmer and her attorney general: You’re not my mother.”

America needs a million or more Karl Mankes.  Even more, America needs judges like Matthew Stewart (FYI, he’s not a Trump appointee, having been on the 35th Circuit bench since January 2015).

And America needs more County Sheriffs like Chad Bianco in Riverside, California, or Mike Herrington in Roswell, New Mexico, who are refusing to enforce their governor’s lockdown orders. Four County Sheriffs in Michigan are the same.

All in all, the Marshall Project reports there are at least 60 County Sheriffs spread across at a dozen states who have publicly announced refusal to enforce lockdown orders, with many more doing the same sotto voce.

With any luck, one benefit that may occur with the above is to shine a spotlight on the fraud of Occupational Licensure.  My eyes were opened to this way back in 1965 reading Milton Friedman’s Capitalism and Freedom.  Chapter IX is entitled “Occupational Licensure,” which Uncle Miltie defines as “the revival of medieval guild regulation” that has no place in a free market economy.

However, if we’re really not going to take this Dem Gov Fascism anymore, we’ve got to go on the offensive, do more than disobey.

Written as part of this HFR, How to Put Lockdown Governors in Jail is now up separately on TTP to make it free and easy for you to copy and send it to anyone relevant: relatives of those who died in nursing homes forced to accept infected patients, reopen groups, conservative legal firms, county DA’s, etc.

We really should want and make every effort to put these evil ghouls in the slammer. And personally bankrupt them.  Dem Fascisiti must be taught a lesson to never try to tyrannize America ever again.  How to Put Lockdown Governors in Jail is an initial salvo in that effort.

The first Gov to wear an orange jumpsuit should be New York’s: 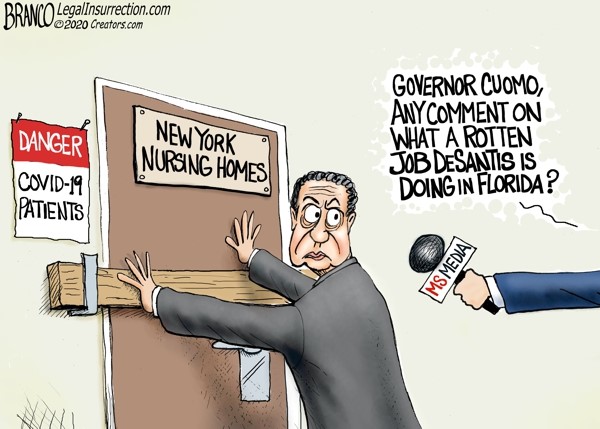 In a Rogue’s Gallery of Dem Depravity, California’s Gruesome Newsom stands out.  He actually said on CNN Monday (5/18) that First Responders will be first ones laid off/fired if fed funds are denied because of taxpayer cash to illegal aliens.  Be careful, Gruesome – someone just might not have the patience to wait for lawsuits and decide you need to be terminated on sight.

It’s another among the growing signs of Democrats going Full Psycho Fascist Retard over using this flu virus as their Path to Power over all of us.

Another is their wacko reaction to POTUS revealing on Monday (5/18) he’s on his White House doctor’s prescription of hydroxychloroquine (HCQ) plus zinc.  The Enemedia went wacko hysterical about this.  Why?  The grim truth is they are, as Dem propagandists, against anything that will help get rid of the Pandemic they created to damage Trump’s presidency.

And use a proven safe medication?  That’s forbidden.  As Derek Hunter explained yesterday (5/21): Liberals and Democrats Would Rather People Die Than Have Hydroxychloroquine Work.

There are few medications used safely more globally by more millions for more decades than chloroquine and HCQ.  TTPer Edd Forke, for example, took it as required in Nam with all the other hundreds of thousands of US soldiers who served there – no problem.

The Dems’, the Left’s, the Enemedia’s reaction to HCQ, their reaction to their entire manufactured pandemic and any attempt to ameliorate it reveals the awful truth of TTPer Joe Katzman’s warning:  They really do want to kill us.

This was exemplified by a report of Wednesday on research from Stanford University Medical School: New Medical Analysis of 12 Global Coronavirus Studies Finds 9 of 12 Show COVID-19 Fatality Rate Similar to Seasonal Flu.

That of course is the overall rate, but drill into the data and you see once again, that unlike seasonal flu which kills both young and old, the China virus rarely kills anyone in normal health under 65, and almost exclusively kills the elderly with conditions like obesity, diabetes, and heart disease.

The evidence is overwhelming and undeniable to everyone except for Dems and the Enemedia:  Universal lockdowns were completely unnecessary, we ruined the greatest economy on Earth for nothing, protect the elderly at risk and leave everyone else alone.

But the Fascicrats can’t leave a manufactured crisis go to waste, especially when they can use it to ruin Trump’s economy and create a pretext for Cheat-In Voting.  Good to see POTUS aware of this today (5/22):

The Dems know their bottom line: they win in November with Cheat-In Voter Fraud, they lose without it.  Biden’s amazing gaffe today shows he’s sliding down ever faster on the Alzheimer’s slippery slope:  telling a black interviewer that if he isn’t for him (Biden) over Trump, then “You ain’t black.”  You have to see it to believe it.

The Dems really are betting the farm on massive voter fraud.  It seems impossible a man as senile, stupid, and corrupt as SloJoe could be their actual nominee.  Donald Trump Jr. nailed it with this devastating meme showing how radioactive he is:

And as I&E notes, with a running mate that has to be a ‘Karen.’  But anyone else is worse – Cuomo is going down with causing thousands of nursing home deaths.  Hillary is a complete Over-The-Hill Has-Been.  Moochelle would be exposed as a tranny.  There’s no one else on the bench – who?

Maybe they could get Mittens to switch parties and be their nominee.  Sure winner there, right?  They have no options out of the corner they’ve painted themselves into, save for keep sabotaging the economy, prevent any end to the pandemic, and get away with massive voter fraud.  That’s it. 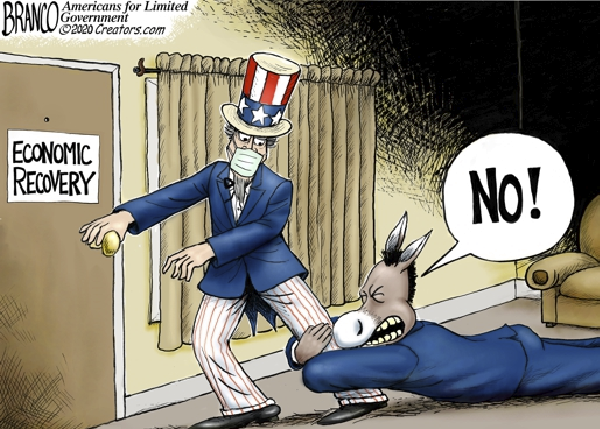 Meanwhile, POTUS is firing on all cylinders.  Watch this clip of him unloading on Obama with Fox’s Maria Bartiromo on Sunday (5/17).

While today (5/22) at a White House briefing, he declared Houses of Worship “essential services” and ordered governors who were locking them down to open them up – “right now – this weekend. If they don’t do it, I will override the governors. In America, we need more prayer not less.”  Watch:

There’s no competing with him.  The Dems know their only chance is ruin, destroy, and cheat.  In that endeavor, they will fail.

Be sure and reflect on How to Put Lockdown Governors in Jail, then send it to those you know or know of who can help achieve this.  I want to thank TTPer Skye for his essential advice.

Enjoy your Memorial Day on Monday (5/25), honoring those fallen in military service to our country.  And don’t hesitate in ignoring any state official who attempts to prevent you in a gathering from doing so. Remember – We’re not gonna take it anymore!