That’s the South Carolina Senator on Hannity Tuesday (5/18), expressing the same passion as Jeffrey Folks in What Trump Meant on TTP yesterday (5/20) and 100 million other Americans.

This passion is what Hate America Democrats are determined to snuff out, no matter what the cost.  That’s why they’ve assigned the corrupt Hate America Marxist Democrat, New York Attorney General Letitia James, to criminally prosecute our POTUS.

It’s a tragically rhetorical question, for it has taken just the last four months for it to cease to be.  Although in truth, it ceased to be over five months ago on December 11, 2020, when the physically threatened and blackmailed Supreme Court refused to hear Texas v. Pennsylvania.

Yesterday over a pint or two of Guinness at my favorite Irish pub with a friend, we talked about this.  Overcome with frustration, he said, “Here’s the question: WHAT DOES IT TAKE??!!  What does it take for millions, tens of millions of Americans to say, ‘ENOUGH!’ and take their country back from the Anti-Americans who have stolen it?”

You can imagine how rueful my smile was, replying, “Yes, that is the question of the moment, isn’t it?  Frankly, I think people are still in a state of shock, and remain unwilling to face the catastrophic reality of what has just happened.  They need a real unavoidable ice cold shower to wake them out of it.”

“What could that be?” he asked.

“Inflation. Real bad, prices of everything everyone needs to buy to live like food and gas going straight to the moon – for which no one else but the Dems are responsible.  It’s already happening of course, just go to your nearest grocery store or gas station – and these prices are just the baby steps.  Prices for used cars are up some 40% now since last year. A year from now, inflation will be intolerable, and so will voting for Dems come November.”

And sure enough – I got back home to see this:  Inflation Nation: Philly Fed Price Increases Hit Highest Since 1980.

Trouble is, the Dems are in Catch-22.  Only cure for inflation is to raise interest rates, which would collapse the stock and housing markets, plus increase federal debt service from hundreds of billions to multiple trillions.  No escape.

A good many other things the DemFascists are inflicting upon us will be fully intolerable before long.  One is their support for BLM Black Nazis.

On Tuesday (5/18) they announced BLM Stands in Solidarity with Hamas which in turn stands for the genocide of Israeli Jews.  Hamas is a flat-out Nazi-for-real-no-hyperbole terrorist group.  Yet that’s not the only thing that makes BLM Black Nazi – as they want the extermination of all Whites, not just Jewish ones.

Their focus on Jews in particular has the same source as that of Hitler’s Nazis: envy of a successful people and culture.  Note the “Wave of Hate” now sweeping the US that Fox headlined this morning (5/21) — US seeing wave of ‘textbook anti-Semitism’ amid Israel-Gaza tensions – is being perpetrated mostly by BLM-type Blacks.

It’s precisely the same with the current wave of Asian hate crimes committed by envious Blacks.  An example:

The ghoulish murder of 4 year-old White boy Cash Gernon by Black monster Darriynn Brown in Dallas last Saturday (5/15) was an act of pathological envious evil.  To see a photo of this Black Nazi and his White victim breaks your heart. 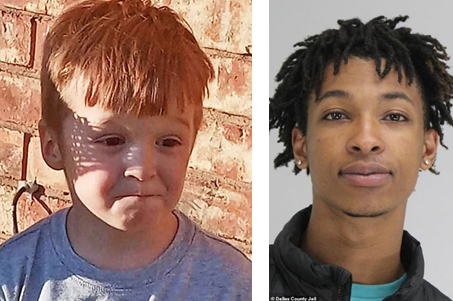 We see stories and videos of Black thugs savagely beating White women virtually every day now.  On Monday (5/17) at a Little Caesar’s in Augusta, Georgia, Black woman Brittany Kennedy unprovoked viciously attacked White woman Emily Broadwater, stomping on her head. Note that witnesses were recording with their cell phones with none of them coming to Emily’s rescue.

This is how pathological envy turns people into monsters – exactly how Hitler did it to Germans.

The huge difference between the Jewish victims of German Nazis and the Jewish, Asian, and White victims of Black Nazis (and White Woke Auto-Nazis) is this: the former had all their guns taken away beforehand, while the latter still have them in massive quantities.

Many TTPers are NRA and/or GOA (Gun Owners of America) members.  Consider membership in and support of JPFO: Jews for the Preservation of Firearms Ownership.  You don’t have to be Jewish to join!  Just be like them: “A Fierce Defender of American Liberty.”

The JFPO documentary “Innocents Betrayed” shows that so-called “gun control” played a fundamental role in all the major genocides of the 20th Century … not just the Holocaust.

Now a note on how when – when, not if – Black Nazi/White Woke Auto-Nazi push comes to Anti-Nazi shove, it won’t lead to race war.

Most all Blacks are like most everyone else – they want to live a nice normal life.  It’s when envy-peddlers get positive publicity by the media, it allows those deranged by envy to engage in violence.  All it takes for it to stop is for a few of them to be shot pour encourager les autres – in order to encourage the others to behave decently.

There are other ways, however.  Here is a short clip from earlier this week where a driver in a red car is attacked by three people, one with a knife, another with a hammer, in the parking area of an Ohio apartment complex.  It looks like he makes an escape – then decides to serve them Instant Karma.

The other side of this solution coin was succinctly expressed by Lindsey Graham:

“I miss Donald Trump.  None of this would have happened if he were President today.  I hope he’s considering running.  Let’s start a Draft Trump Movement. He’s the one guy I think who could go to the American people and say, ‘Let me finish what I started – what I did worked.”

No President, Dem or GOP, did more in four years for Blacks than Donald Trump – not by welfare handouts but by good jobs in a booming economy that gave them pride and belief in themselves again.  He’ll do it again as 45 becomes 47 in ’24.  And all the garbage we are enduring now will be gone with the wind.

*Texas Gov. Abbott Bans Public Schools and Local Governments from Requiring Masks.  Every governor in the US should do this.

Now this is the way to do it. Ouch!

*Republicans Tell Chamber of Commerce to Pound Sand.  A GOP with Spine? Will wonders never cease…

*Space Force Officer’s Book on Marxism in the Military Reaches No. 1 on Amazon After He’s Relieved.  I bought it – hope you have too.

*And just in this morning: Georgia Judge Orders 145,000 Absentee Ballots from Fulton County to Be Scanned to Determine Legitimacy

We close with this vignette.  On Wednesday (5/9), Zhou Xiden spoke at the graduation ceremony of the Coast Guard Academy.

First he bungled the name of the US Coast Guard Commandant, Admiral Karl L. Schultz.

Then he bungled an old inside joke known to all the cadets that pokes fun at the Navy – that the Coast Guard is “the hard nucleus around which the Navy forms in time of war.”

There were no laughs, no applause.  Whereupon he exposed himself as the Grade A world class horse’s ass jerk he is at the bottom of his shriveled soul.  He got mad at them and insulted right to their faces for not laughing or applauding.

This is a man who says he is the President of the United States.  And this is the low-life he truly is.  Watch – and realize we won’t have to put up with him for much longer.  One way or the other, he’ll be gone, never to finish out his one term.

Postscript:  Imagine then the White House bind the Dems are in now.  Try on this from PJ Media yesterday:  Democrats Bewildered at the Unpopularity of Kamala Harris.

No one else is, that’s for sure.

Oh, by the way.  Know what those obnoxious people who get mad and cause a big scene over someone not wearing a mask are called?  Maskholes.