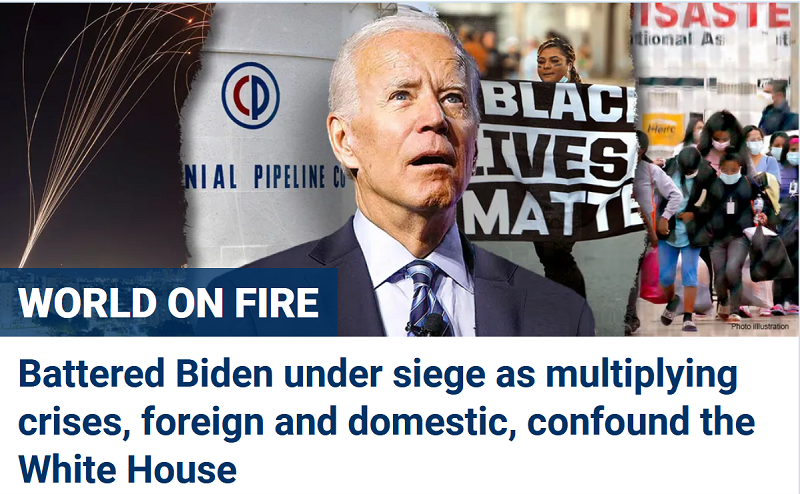 This was Wednesday’s (5/12) front page lead headline story on Fox News.  A headline of Schadenfreudelicious beauty. And here’s even better news – it’s all downhill for the Dems from now on.  POTUS puts it this way:

As one wag observes: 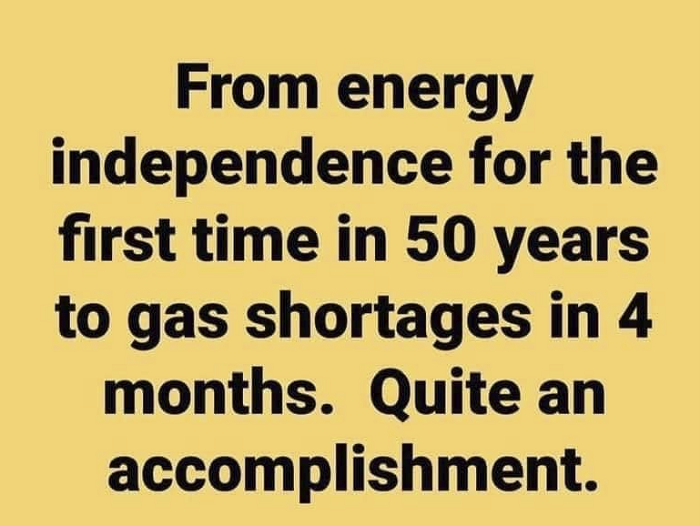 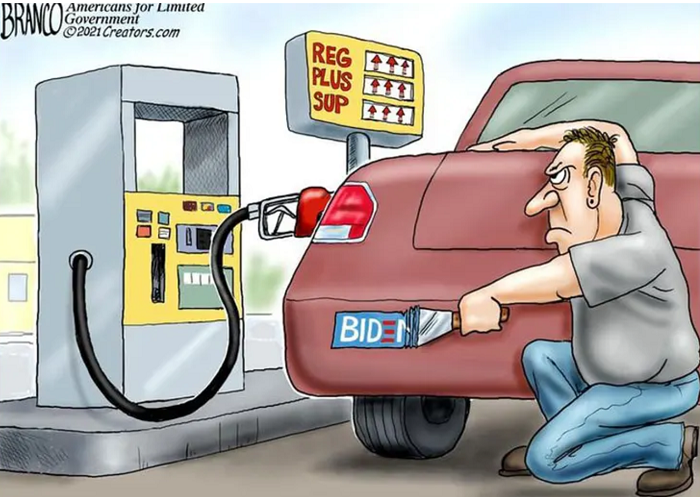 Yet this is just the prelims, the warmup, and there’s no way Dems can avoid the main event: double digit inflation.  You saw where we’re headed in Skye’s Links yesterday (5/13).

The Inflation Monster Has Been Unleashed

There are claims that means Jimmy Carter’s Misery Index of inflation, interest rates, and unemployment all three in double digits – but it’s worse than that.  POTUS is right – because the Dems are in a trap of doom: they can’t raise interest rates.

That’s the only way to kill inflation, as Reagan’s Fed Chairman Paul Volker knew and did.  With inflation at almost 15% as RR took office in January 1981, Volker squeezed it down to 3% by 1983 – by raising interest rates above 20%, causing over 10% unemployment and the 1982 Recession.

But it worked, as RR and Volker had the guts to do what it took. By mid-1983, the Reagan Boom launched, with RR winning a monumental reelection landslide 525-13 electoral votes (49 out of 50 states) in November 1984.

Hey, Dems – there’s no way out of this trap.  Printing money to pay debt service would just cause inflation to skyrocket  higher.  There is a way, of course, but you Dem fascisti have neither the brains, cojones, nor moral principles to follow it.

Trouble is, we all going to suffer for the Dem sin of stealing the presidency.  There will be a massive electoral wipeout of the Dems in Congress in ’22, which can staunch Dem damage – but no repair and resuscitation until 45 becomes 47 in ’24. So we may have to gut it out until POTUS comes to our rescue almost three years from now.

Then again, at least for the ’22 part of that scenario…

One death among the 13 Dem Senators with a GOP Governor who can GOP-replace them and McConnell is Majority Leader again.

You can see what thin ice Bela Pelosi is skating on.  As it is now, she can’t afford to lose a literal one handful of votes.  Any deaths or incapacitations could make it impossible to hold her team 100% together. Increasingly impossible, in fact, as the Thief-in-Chief’s stolen presidency disintegrates further, inflation rages, and more and more Dems face landslide loss in ’22.

The NYT quotes Brian Fallon, former Schumer aide, as saying that Dem control of Congress is “dangling by a thread.”  He’s right.

Speaking of Schadenfreudelicious events of the week, how gratifying the House GOP by overwhelming voice vote kicked out Loathsome Liz Cheney from GOP Conference Chair on Wednesday (5/12). Not one of her colleagues – not even Adam The RINO Kinzinger – spoke in her defense.

One of those colleagues observed: “It’s like political self-immolation. You can’t cancel Trump from the Republican Party; all she’s done is cancel herself.”  What a klafte ­– she might as well resign now, with her chances of reelection next year Kelvin Zero.

Daily Caller: ‘Things Have Shifted Dramatically’: Hispanic Leaders Explain Why Hispanic Voters in Texas Are Shifting Republican.  So much for the Dem Dream of turning Texas blue.

Gateway: “Border Czar” Kamala Infuriates and Insults Mexican President Obrador. Kamala is a brainless rhymes-with-witch, irretrievably unlikeable and to the left of Lenin.  Her first foray into international diplomacy was an unmitigated disaster.

Breitbart: Oklahoma Governor Signs Bill Banning Teaching of Critical Race Theory.  This resulted in the Oklahoma City Board of Education condemning the ban of racist CRT as “racist”!  You can’t make this up.

Parents in Oklahoma City have responded with a recall petition of the entire idiot board.  Parents across the country are doing the same.  A Black mother named Shawntel Cooper delivered a “Look at me!” condemnation of CRT to the Loudon County School Board on Tuesday (5/11) that has gone mega-viral.

Shawntel Cooper is a candidate for HFR Hero of the Week.  There are two others.

On Wednesday (5/12): MTG Blasts “Ms. Defund the Police” AOC for Wanting Security to Protect Her After Confrontation, Slams GOP Turncoat Adam Kinzinger for Siding with Ocasio-Cortez.  To her face, MTG challenged AOC to a debate on the Green New Deal and asked, “Why do you support terrorists and Antifa?”

Bela Pelosi threatened her in response: Pelosi Calls for Ethics Investigation of Marjorie Taylor Greene for ‘Verbal Assault and Abuse of AOC’, a ‘Cause of Trauma and Fear Among Members’.  MTG’s answer:  a hearty belly-laugh.

On Thursday (5/13): Leftists Triggered After Buffalo Bills’ Cole Beasley Mocks Fauci.  Beasley mocked China Zhou for thinking he needed these clowns’ permission to not wear a mask, or obey Zhou’s toothless “rule” to “get vaccinated or wear a mak until you do.”

The triggered Left went into full Cancel Culture, hoping Beasley would grovel and beg for forgiveness. Not a chance.  He won’t back down an inch.  This is the only way to defeat this fascist evil – laugh, say thank-you-for-sharing, and please have a mind of your own.

“I am a public high school math teacher here in Texas.  Issues relating to education are always relevant to me, and since I’ve been teaching for 27 years, I have seen trends come and go.  Lately, I have noticed the following:

White liberals are working on some long term plan to water down all of public education, decrying all of it as hopelessly racist, colonial, oppressive, etc. until they eventually tell Black and Latino people “Don’t bother sending your children to public schools.  Teach them at home.  That’s the only way your children will receive an authentic education.”

The way I see it, all of this sure seems like a long-term plan to remove Black and Latino students from the public education system.  Now, maybe this is not their intention (or maybe it is), but it definitely will be the result.

I welcome your opinions and reactions to my little essay.  Thank you.”

“Michael — I very much appreciate your sharing this with us.  Your points are very well taken.  They emphasize how much White liberals want to keep Blacks and Latinos dependent on the government welfare Plantation for their votes.  They couldn’t care less about them otherwise.

The purpose of their racist scam is two-fold:  make minorities feel they are victims, not self-reliant and can take care of themselves (who needs welfare then?), and control Whites with White Guilt.  Guilty people are also far more easy to control.

They are forced to do this as original Marxist class warfare doesn’t work anymore with a prosperous working class.  So they must switch the Marxist rationale to Identity Politics, with warfare between races — Whites Vs. “People of Color” (everyone Non-White) replacing Proletariat Vs. Bourgeoisie to keep their power trip going.

All Lefties care about is power over others, not a prosperous free society.  Everything they do flows from that.  Thanks again, Michael.  Jack”

To this discussion, TTPer Mike Ryan provided this sobering assessment:

“I am one of the finalist judges for chemistry and chemical engineering for the Ohio high school science fairs. From 70,000 or so projects at the high school level, the field drops to about 2,000 after regionals. This year’s final event will occur in two weeks at The Ohio State University, which has a large enough field house for the covid wingnuts to socially distance.

Urban students are socially promoted from their schools and through the regionals. After 25 years of judging these projects, I see a decline in the understanding and application of the scientific method. Actual science has been wiped from urban school systems.

Within the science fair program, any one of several versions of the scientific method is acceptable. I prefer Popper’s falsification method, but several methodologies are accepted as scientific and valid.

Urban kids are taught that science means proving public opinion correct through a correlation of independent and dependent variables.

That is not natural science; that is political science.

Each year the percentage of homeschooled kids winning the top prizes increases. The rate of suburban schools remains about the same, the fancy private academies gain ground, and the urban schools sputter out.

The problem is the curriculum and not the funding. Urban school districts are financed as well or better than the others.

Willfully misteaching political science in place of the real deal ought to be a crime. Student’s lives are being destroyed. No amount of remedial cognitive behavioral therapy taught at some future community-based incarceration programs will erase the flawed thought process taught at some (most) urban high schools. These kids are doomed to ineffective thought processes for the rest of their lives.”

Wow.  How sobering can you get?  Such is the value of the TTP Forum.  Once again, the most valuable resource of TTP are TTPers themselves – you guys n’ gals.  So please jump in and offer your own insights – and if you’re a little unsure how to do that, email Miko at [email protected] and he’ll guide you through it.

So we’ll close with another Forum example from just this afternoon (5/14).  When TTP’s beloved gadfly Julius of Canada asked:

“There are rumblings that the government of our teenaged Prime Minister will be making moves to regulate the Internet soon. With this you can expect an attempt at censorship of outside websites. Will they go after TTPN?”

The Mike Ryan Cavalry came to the rescue with trumpets blaring:

TTP is accessible via the Tor network with duckduckgo or through a fully anonymous browser from a USB stick. Tails is an excellent incognito portable browser and fully compatible with TTP. If your country turns the screws on the internet, switch to Tor.

Tails is an entire computer system including Linux versions of Microsoft office operated from an encrypted USB stick or DVD. It will not run from a hard drive. You plug it in, boot, and work from the stick, leaving no trace behind on the host computer.

If someday, the thought police kick in your door, you can smash the stick with a hammer and pretend to be a Clinton or turn over the stick with Tails hidden and scrambled amongst the stick’s free space. It self-destructs after a few failed password attempts. Seth Rich is thought to have used Tails on a USB to bring down Hillary and the DNC.

Does one need a VPN while using Tor? Probably not, it slows things down, but I use the Cryptohipie VPN over Tor to access TTP. My computer does this automatically after entering the passwords. Cryptohippie servers are virtual and might be in Panama today, someplace else tomorrow.

If you are worried about the Canadian government censoring you or worse, you should have a copy of Tails loaded on a USB stick. Use it or not, but download a copy before it becomes impossible to acquire.

Tails download Here.  The link is free and clear on duckduckgo. Google cannot control Tails nor read your signals on Tails, so they intimidate you with a scary message.  Use duckduckgo, firefox, brave, or edge to link to Tails. Google is not a friend of liberty.

PC Matic, Norton, and McAfee each reported the link to be virus-free.

This is the actual URL of the link: https://tails.boum.org/install/”

Wow once more.  See what I mean about the value of the TTP Forum?  I hope I see you on the Forum soon!