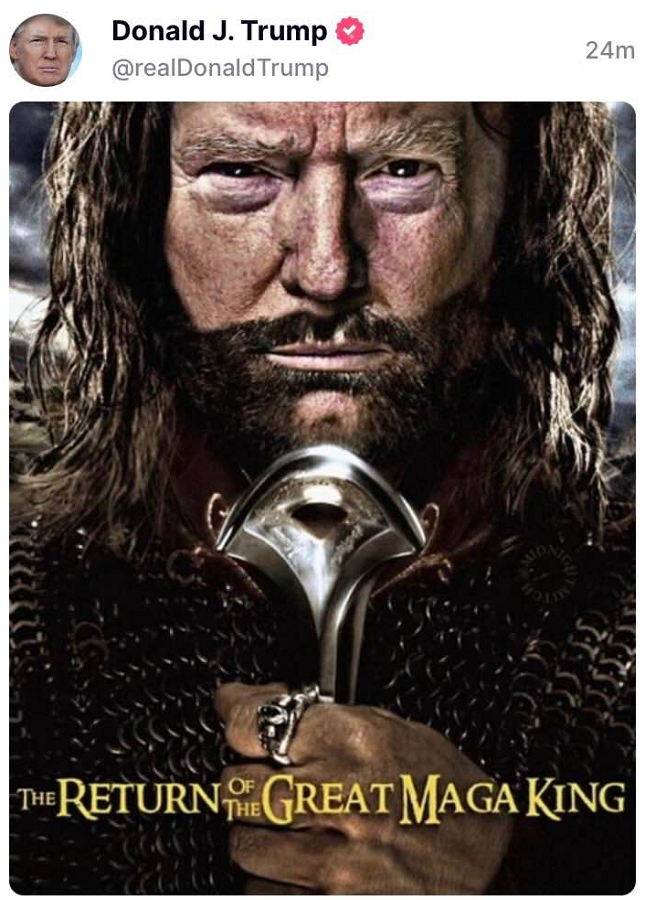 Welcome the Friday The 13th HFR!  It’s the only Friday the 13th of the year, 2022, so let’s make the most of it by seeing who’s having a real bad luck day today.

First, though, let me take a moment to thank Mike Ryan for his marvelous HFRs of the last two weeks while I was in the Himalayas.  Thanks so much, Mike!

We start with the Great Impostor, who on Wednesday (5/11) tried to ridicule the man he stole the presidency from as “The Great MAGA King”.  The senile buffoon thought it was an insult, when the majority of Americans think it an accolade. So POTUS quickly riposted with himself as Aragon, hero of the Lord of the Rings.  Classically cool.

This came on the heels of the Impostor saying publicly (5/04) that POTUS’ MAGA movement is “the most extreme political group in American history.”  Branco showed how insane that claim is: 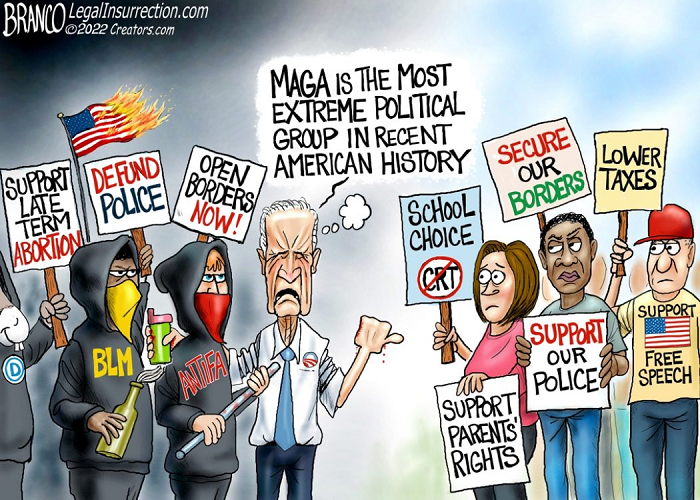 Next in today’s bad luck roll call: the Big Tech Fascisti.  This morning (5/13):  Texas Has Declared Open Season On Facebook, Twitter And Youtube With Censorship Law

“Texas residents can now sue Facebook, Twitter and YouTube for allegedly censoring their content after a federal appeals court sided Wednesday (5/11) with the state’s law restricting how social media sites can moderate their platforms…

Texas’s law makes it illegal for any social media platform with 50 million or more US monthly users to ‘block, ban, remove, deplatform, demonetize, de-boost, restrict, deny equal access or visibility to, or otherwise discriminate against expression’.”

Well, shoot for a mile.  Just what’s needed to rein Big Tech in.  Hopefully, lots of red states will now pass similar legislation, and ultimately SCOTUS will rule that BT can’t discriminate between customers any more than phone companies can regarding disapproved opinions.

Of course, the issue will be moot for Twitter once Musk imposes his free speech rule on it.  Skye, by the way, is very knowledgeable on this, so check the Forum to see if he shares it with us. 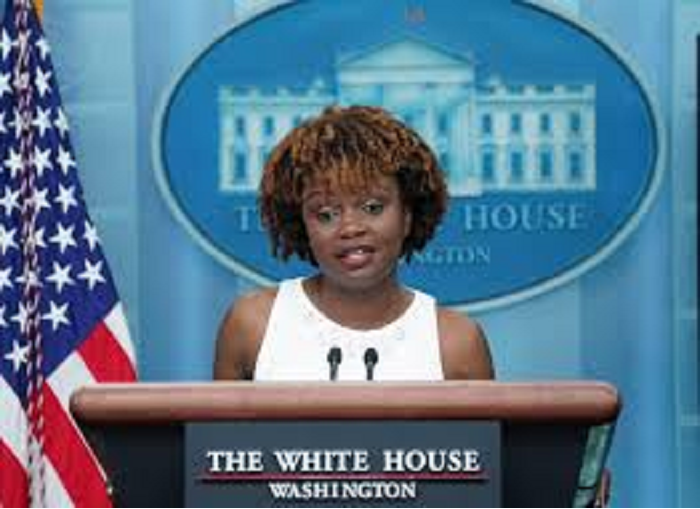 I thought White House press secretaries could not get dumber and less attractive to look at than Jen Psaki – but I was wrong. Karine Jean-Pierre is a Haitian affirmative action baby out of Columbia University, and a MoveOn.org woketard.  She’s LGBTQWTF, natch, thinks Trump stole the 2016 election from Hillary, and enjoys denouncing Fox News as “racist.”

This morning (5/13), she officially replaced Psaki, whom no one will miss.  Can’t wait to see Peter Doocy exposing how inadequate she is.

It could be fun to watch Karine fulminate with bitter tears when SCOTUS issues a 5-4 decision to overturn Roe.  Numerous reports – like this from Forbes on Wednesday (5/11), Supreme Court Majority Reportedly Still Supports Overturning Roe V. Wade – say Alito, ACB, Gorsuch, Kavanaugh and Thomas are holding on to their guns even though being pressed by limp, ah, wrist Roberts to wimp out.

The decision could be announced anytime between now and sometime in June – the sooner the better for us, but likely not until the Court closes shop so the above five can skedaddle out of time to places unknown.

Meanwhile, however, Karine will have to fuzzball her way out of explaining why pallets of baby formula are being shipped to illegal aliens at the border while there are empty shelves for US citizens. As Florida Congresswoman Kat Cammack says, “This is what Biden’s America Last looks like.”

And Karine will have the impossible task of rationally justifying the Biden decisions yesterday (5/12) to keep strangling US energy production: Biden Administration Ditches Huge Auction Of Oil And Gas Drilling Rights As Average Fuel Prices At The Pump Hit ANOTHER Record High Of $4.42.

Not only will she never admit the truth, her woke brain won’t allow her to understand the truth: that the Left’s Climate Change religion is simply an invented rationale for controlling everyone’s life.  Just watch how the media dotes of this dolt.  Better yet, don’t even watch at all.

Now we turn to the biggest bad luck loser of all this week of Friday the 13th.  Here’s a series of hints as to who that could be.

Wednesday (5/11): Ukrainian Counter-Attack Drives Russian Troops Back To Their Own Border Near Kharkiv As Kyiv Shuts Off Pipeline Carrying Up To A THIRD Of Russia’s Gas Into Europe

“As Ukraine’s military continues to inflict humiliating losses on Russia – all-but pushing them away from the northern outskirts of Kharkiv – it now appears that Russia’s troops are beating a retreat back across their own border to the north, and across the Donets river to the east after a series of successful Ukrainian counter-attacks.”

Wednesday (5/11): Russia’s Death Train: Bodies Of Putin’s Fallen Troops Are Loaded Into Refrigerated Carriages In Ukraine With Morgue Workers Finding Gold ‘Looted From Civilians’ On Corpses – Moscow Refuses To Claim Its Own Dead 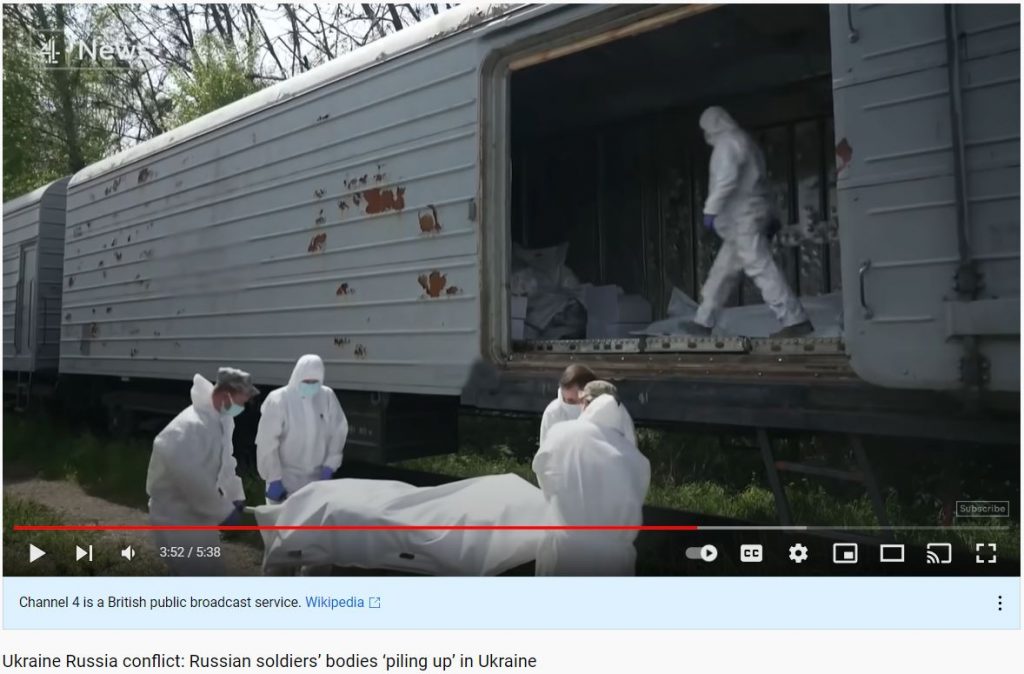 Wednesday (5/11): The Russians Lost An Entire Battalion Trying To Cross A River In Eastern Ukraine

Thursday (5/12): Putin’s Bridge Too Far: Russians Mount A SECOND Doomed Attempt To Cross River Where Ukraine Destroyed A Whole Battalion – Forcing The Survivors To Swim For Their Lives Following Disaster

Two battalions have now been wiped out, over 1,000 Russian dead and many more wounded, over 70 tanks, APCs and military vehicles demolished, all in trying to cross a 70-foot wide stream. 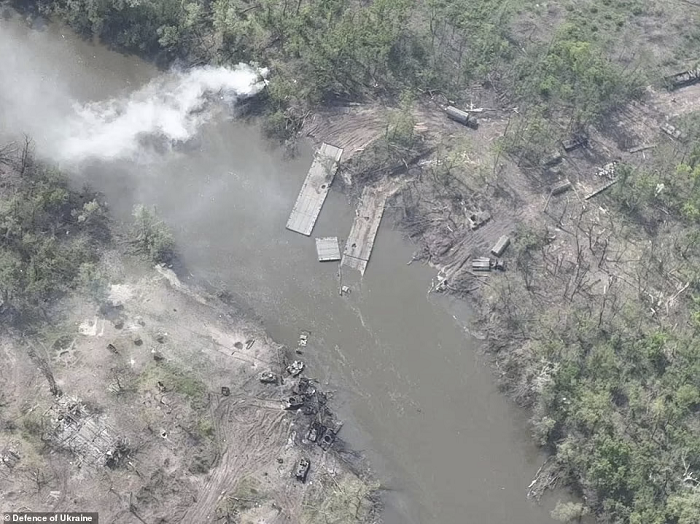 Thursday (5/12): Mi 24 Russian Helicopters , So Advanced They Carry Their Own Washing Machines…

This Mi 24 Hind helicopter gunship was shot down in the Donbas, found to be carrying loot from Ukrainian homes – hardly any Russian home has a washing machine. 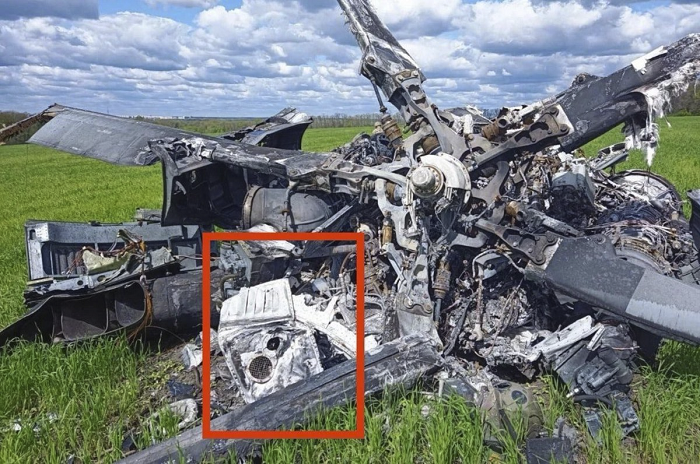 Thursday (5/12): From Poisoned Pie To Oiled-Up Train Tracks: How ‘Partisans’ Are Fighting A War Of Sabotage For Ukraine

All over Russia now, Russians are rebelling against Putin’s war that is killing their cannon fodder children uselessly.  They are burning down army recruitment centers, sabotaging railroad tracks, and much more.  All in hopes that it will help stop an evil war of stupid conquest that has already killed at least 27,000 Russian soldiers. 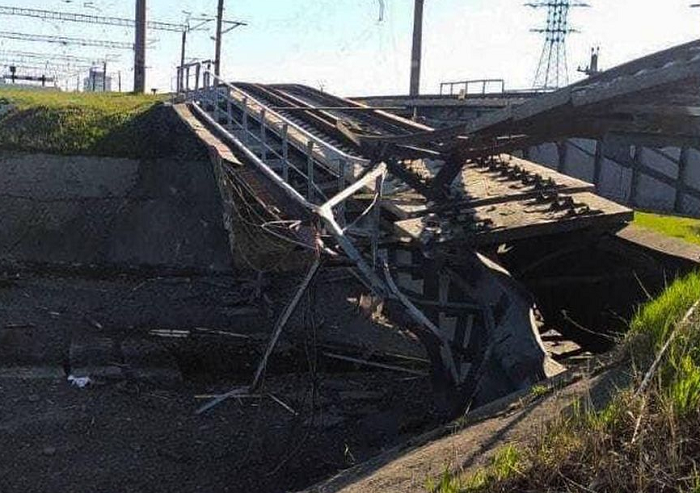 This morning (5/13): Putin’s ‘Purge’: Russia’s Top Commander Valery Gerasimov ‘Is Suspended’ While A Clutch Of Other Generals ‘Have Been Sacked Or Arrested’ Over Ukraine Invasion Blunders

When will Pooty-poot accept that he is responsible for this satanic debacle, he and he alone?  Never – for he has neither the guts nor integrity.

Yet he may not matter, for what I’ve been saying in TTP for weeks now is being confirmed: Putin Order To Hit The West With Nukes ‘Would Be IGNORED Because Top Commanders Think He Is Dying Or Gravely Ill’

The world will be rid of Putin’s madness before long, and of Putin’s Russia.  What there will be in its place remains to be seen – but this is now certain: Russia will never again be a respected and feared military power, at least not for a generation or two.

The other piece of good news on this Friday the 13th is that the Democrat’s woke madness will be coming to an end within six months, or at least very substantially weakened.  GOP House & Senate majorities in charge of all committees will see to that.

That will be the road upon which Ukraine will soon embark.  Once Russia’s invaders are militarily removed from or buried in the dirt of Ukraine, the world will be astounded at the speed with which Ukrainians will rebuild their country anew.

Here’s an example.  You know of the horror the Russian invaders perpetrated in the town of Bucha with murdered people scattered on the streets.  The town was liberated on April 3.  Look at the difference Ukrainians made in just three weeks after they got their town back.

So we close with a presentation of 50 photos of the beauty of Ukraine as it was before a madman’s war descended upon it – for this is how this historic and peaceful nation will look once more.  Please take a few moments to enjoy:

The Beauty of Ukraine