I’m sure you are as sick and tired of nothing but garbage news 24/7 about this blanking Chicom flu, so we begin with the truly most important actual news of the week:  The Gronk is back!

Yes – on Tuesday (4/21), the most lovable, the most colorful, the most spectacularly talented touchdown-scorer in the NFL, the Giant with the Velvet Hands, Rob Gronkowski renounced his “retirement” to join the greatest quarterback in football history bidding the Pats goodbye to play for the Bucs next season.  Party time in Tampa.  Florida here we come. 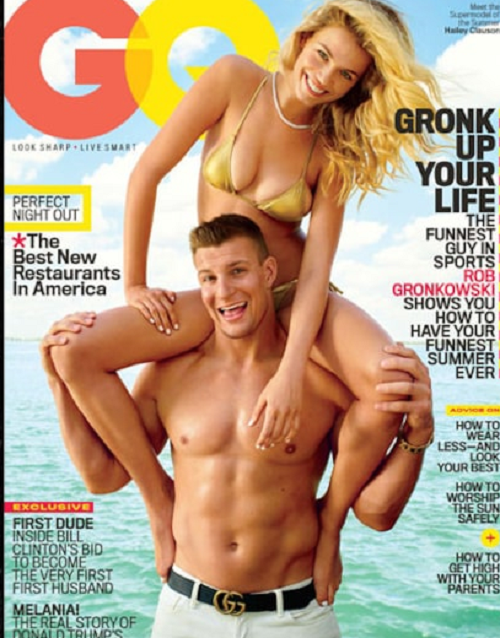 Colin What’s-his-name and his fellow kneelers are so yesterday.  As are lockdowns and panic-mongering by Dems and the Enemedia.  We are ready for some football this fall!

I’m on LinkedIn for my company Wheeler Expeditions.  Earlier this week, LinkedIn News Editor Andrew Murfett kindly asked me to comment on what impact will there be on the travel industry, and my company in particular, in a post-pandemic future.  My response:

“Our clients are both well-traveled and well-informed.  They understand that this is the greatest ‘Madness of Crowds’ global hysteria history has ever seen.

They are aware of the mass serological surveys with antibody testing conducted by Stanford University Medical School and replicated elsewhere showing between 1/10th to 2/10th of 1 percent (one to two per thousand) die of being infected (about the same as seasonal flu).

They scroll down the Daily Coronavirus Update of 210 Countries and Territories and see the great majority have minimal death stats: As of April 22, 50 have total deaths in 2 digits, 110 are at 1 digit or zero.

Thus our clients are eagerly awaiting our dream safari in Zambia at the end of June, our exploration of all five Stans of Central Asia in September, our Himalaya Helicopter Expedition in October and Hidden Bhutan in November.  Blue skies are ahead, with fear and panic-mongering left far behind.”

Frankly, it would be nice to see overt evidence that POTUS and his VP are as well-informed as my clients and TTPers.

As you learned in the vital must-read of yesterday (4/23), Five Key Facts Why the Lockdowns Must End by Stanford’s Scott Atlas, MD:

*If you do not already have an underlying chronic condition, your chances of dying are small, regardless of age. And young adults and children in normal health have almost no risk of any serious illness from COVID-19.

Whole population lockdowns are preventing what is always the cure for such diseases, population or “herd” immunity.  You have to protect the elderly and at-risk specifically and only, not everyone.  TTP has been hammering on this for some time.

No one seems to have gotten through to POTUS and VPOTUS on this.  Thus, CNN gleefully reported that on Wednesday evening (4/22), Donald Trump Just Threw Georgia’s Governor Directly Under the Bus on Coronavirus for ending Georgia’s state lockdown “too soon.”

Yesterday (4/23), VP Mike Pence told Fox’s Geraldo Rivera, “by Memorial Day Weekend we will largely have this coronavirus epidemic behind us. State and local officials will begin to reopen activities.”

Begin?  A month from now, May 25th? The lockdowns have to end now, Mr. Vice President, as all the protestors are demanding, as the medical science of herd immunity demands, and the very life of our economy and millions of livelihoods demands.

Indeed, the China Virus lockdowns should never have happened in the first place, any more than for the seasonal flu. As Brit Hume said Tuesday (4/21) on Fox, the lockdowns have been “A colossal public policy calamity.”

What happened instead, while POTUS’ initial instincts were correct that the panic-mongering of the Enemedia was a “hoax” at the end of February, yet taking very smart preemptive action a month earlier banning travel from China, he ended up getting played by the Dems and media.

They caught him in a trap, with their fear-mongering and panic-hysteria stampeding people into accepting fascist lockdowns of their lives and livelihoods on one side, and nonpstop megaphoning blame on him that everything is his fault.

His being surrounded makes you think of a scene in the greatest Western ever made, one of the greatest movies of all time, The Searchers (1956).  A detachment of Texas Rangers led by Ward Bond finds war-painted Indians on either side.  An angry John Wayne tells Bond, “Well, Reverend, looks like you got yourself surrounded.”

What we need is for POTUS to respond like Bond – “Yeah, and I figure to get myself UN-surrounded!”

He can escape from the ambush by forgetting his Phases 1-3 and going immediately to Phase FU eliminating all lockdowns (excepting the elderly at-risk), quickly gaining herd immunity to make the virus vanish, and get our economy back on its feet before it’s in a paralytic’s wheelchair.

Yesterday (4/23) came this Fox headline: Dem lawmakers eye ‘opportunity’ for historic expansion of government amid coronavirus crisis.  Every crisis is used by them to expand government control over our lives, rather than expand individual freedom and innovation to overcome the crisis.

“The renewed push (for ‘a new progressive era’ in state and national politics) comes as ideas normally advanced only by progressives — such as expanded unemployment benefits and direct cash payments to every American — have been adopted by Republicans as part of a short-term response to an unprecedented national emergency. The over $2 trillion stimulus package that passed included both measures, and more remains under discussion.

But while Republicans and conservatives say that such measures are appropriate only in limited circumstances, Democratic politicians see the door as now having been opened to an enormous expansion of government. It’s an expansion that would also have no clear off-ramp.”

It’s terrifying how quickly our country abandoned its constitutional freedoms by this manufactured flu panic.  So let’s be clear – it is the Democrat Fascist Party’s intention to end those freedoms forever if it defeats President Trump and gains the White House in November.

Those are the stakes, so now I am going to make you cry.  In the wee hours of Wednesday (4/22), long-time TTPer Richard Foxx, MD, posted this on the Forum.  It affected me deeply and I must share it with you all.  It’s up now as The Sweet Land of Liberty Is In Mortal Danger.

We are in your debt, Richard.  He concludes:

“One by one we have been browbeaten into relinquishing our liberties for the most innocent of motives.  If this trend is left unchecked we will eventually find out why Emiliano Zapata once said: “I would rather die on my feet than live on my knees.”

And that would be the end of the Great Experiment that is America.”

We cannot, we must not, we will not allow this to happen.  The Dems and Enemedia are doing everything to make it happen by demonizing anti-lockdown protestors, extending lockdowns (e.g., Michigan, California, Virginia, New York, Pennsylvania, Washington), and constantly pounding a drumbeat of blame on Trump.

North Dakota, South Dakota, Nebraska, Iowa, and Arkansas are in little or no lockdown.  Starting today and through next week, Georgia, South Carolina, Tennessee, Alabama, Florida, Texas, and Colorado will be substantially opened up.

Watch for the Enemedia to megaphone any and all deaths attributed to the China flu in these states and ignore those remaining on lockdowns.  Never forget they really are the Fascist Enemy of America.

The anti-lockdown protests have to continue and grow, lockdown orders (which are not laws, merely unconstitutional decrees) need to be disobeyed en masse as peaceful disobedience, arresting officers personally sued, and jury trials demanded.

The only way for the lockdowns to end, to get our freedom and economy back, to kill the virus via herd immunity is mass civil disobedience in those states where lockdowns persist.  Pray for that, participate in it however you can.  The anti-lockdown protests are the hope of America.  This sums it up: 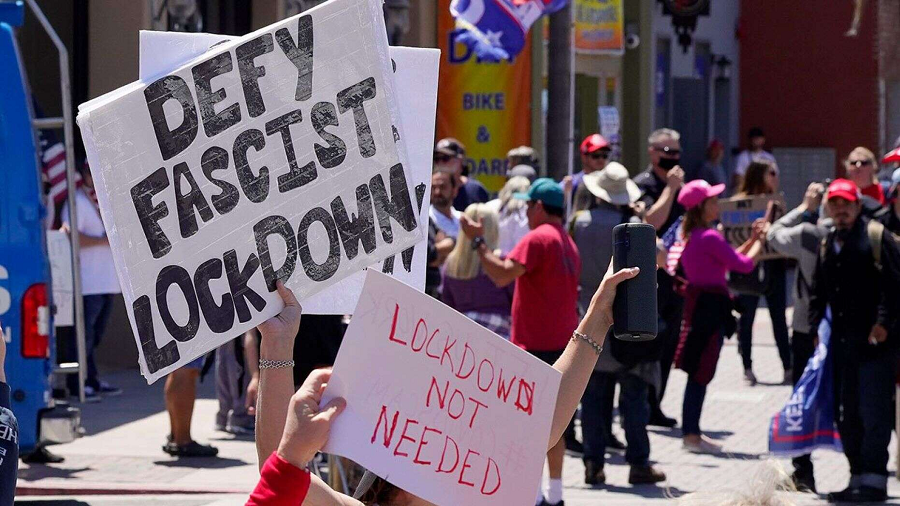 The HFR Hero of the Week is Georgia Governor Brian Kemp: Georgia governor stands by decision to ease restrictions despite split from Trump.

The Dem Bitter Disappointment of the Week:  Valerie Jarrett: ‘No chance’ Michelle Obama will be Biden’s VP.  If ValJar says it, you can take it to the bank (one that allows you withdrawals without penalty).

The Comedian of the Week would be the commander of Iran’s Revolutionary Guards, Major General Hossein Pastrami – I mean Salami – who Wednesday (4/22) said he would “destroy” the US Navy in the Persian Gulf.

And followed that up to the press later that day:

General Pastrami is well-advised not to test POTUS’ threat.  Although in truth, we all wish he would.

During his 2016 campaign, Trump was fond of saying to his audience:

Yet behind his boastful joke, there was a veiled unspoken warning against becoming jaded about winning.  That could lead to Hubris, which as the Greeks knew, morphs into Nemesis.

Because when people become too used to winning, in any setback they too readily accept defeat.

Like a predator who spots a weakness in his prey, the Dems and Enemedia pounced upon America, with a manufactured panic over a flu virus as the excuse.

Ask any conservative with a large following on the three above, and they’ll tell you anything they say against the party line about “CV” – their code for the Chiccom virus – gets erased with a warning that getting banned is next.

Yet every person can still make a difference.  TTP can help you do so.  You know how valuable TTP is to you personally – that’s it’s an amazing bargain so easily worth paying for.  Yet if ever there were a time for more people to be aware of that value, to exponentially expand TTP membership to gain the clarity of thought TTP provides – that time is now.

By tomorrow, in the top right of the TTP home page you’ll notice something new:  Help Save America – Share TTP

Help Save America – Share TTP gives a number of TTPer testimonials on what TTP means to them.  I must tell you how much their words mean to me, how much they touched me deeply.

My request is to simply copy the Share TTP URL — https://sharettp.gr8.com/ — and send the link to everyone you know, with a message of encouragement to become a TTPer as you are.

With a note making sure they know the offer is for a Free Two Week Trial Subscription – no credit card required.

Or if you want to do it right now before it’s up on the home page, just copy and paste Help Save America – Share TTP.

It’s a small thing that could make a big difference in the fate of our country.  Think of how much hope you would give to your friends, how much understanding of the maelstrom around us, how much fun and satisfaction they would have being a part of our TTP family.  Just like you.

Thank you for doing this – sending the Share TTP URL — https://sharettp.gr8.com/ — to those you know, suggesting they benefit from being a TTPer like you.  It will mean a lot to me – and it could end up meaning a lot to our country’s future.