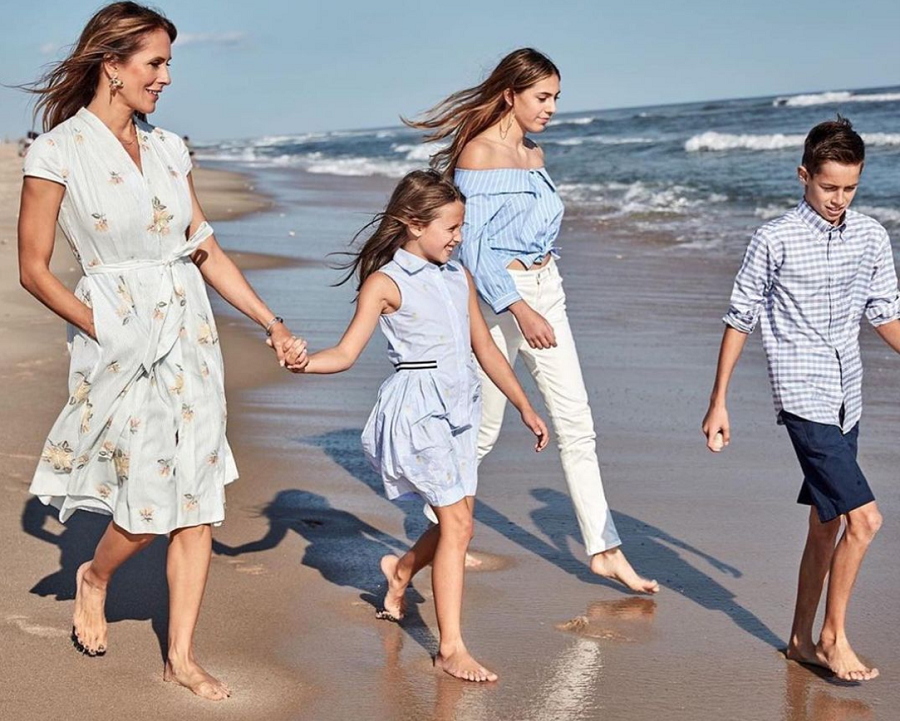 The Bombshell Shock Headline of the Week (4/18):

CNN’s Chris Cuomo Calls For His Three Children To Be Murdered.

He and his wife Cristina have three beautiful children – Carolina 11, Bella 17, Mario 15, pictured above with their mother. He loves them with all his heart yet by his own admission he wants them killed.  Why?

Because when you click on the link above, you’ll see the actual headline is: CNN’s Chris Cuomo: ‘White People’s Kids’ Need To ‘Start Getting Killed’ For Police Reform To Happen.

It’s a report quoting him during his Cuomo Prime Time CNN news show last Friday evening (4/16).  He actually said that the only way to get “police reform” is for “White kids to start getting killed.”

But he and his wife are both White and thus so are their three children.  Granted, he’s a CNN talking airhead without the brains to realize his words apply to his own white kids:  “We won’t get police reform until White kids like mine start getting killed.”

“You mean, Chris, that achieving ‘police reform’ would be worth getting your children killed by police?”  Of course he’d say No!, horrified at the very question should a reporter have the moxie to ask him.  “So why would your goal be worth getting someone else’s White kids killed?” should be the follow-up question – which just might make him realize the insane evil of his woke premises.

Maybe.  He may have dug himself too deep into the Woke Hole that he can’t climb out – like so many other Wokeists.  Which is one primary reason for the inescapable Doom of the Democrat Party.

Doom means doom – adios, arrivederci,  au revoir, da svidaniya, finita la musica – the music is over.  Please understand what we are witnessing before our eyes in real time – a historical political realignment that happens once in a century or more.

For all our lives – for all our father’s and grandfather’s lives – Democrats positioned themselves as the party of “the little guy,” the workers, the poor, while Republicans were the party of the rich, big business, the Country Club elite.

Until now.  President Trump accomplished an extraordinary number of positive achievements for America – yet above all, history may recognize him as triggering the realignment of the GOP away from the Country Clubs, Wall Street, and the Chamber of Commerce to Main Street, workers, small business and the middle class

And in the process, POTUS triggered the exposure of a Democrat Party based on fraud, corruption, hypocrisy and lies. 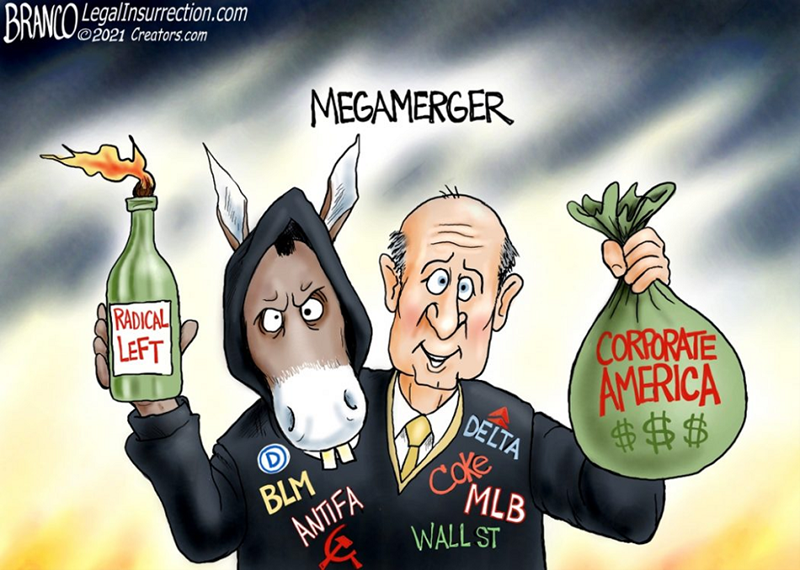 And by Skye’s Link yesterday (4/22) to GOP Leaders Rake in Grassroots Donations Leaving Corporate PACs Behind. This is a true must-read.

For years, GOP politicians depended on corporate PACs, trade associations, and Wall Street for campaign money (the “mother’s milk of politics”) – all of whom stopped giving in January to punish GOP pols for being pro-Trump. Big mistake.

The GOP pols turned instead to the millions of Trump-supporters happy to make small donations under $200 to thwart Zhou Xiden’s crusade to destroy America.  Note the massive two-fer:

GOP pols are no longer dependent on Woke Wall Street nor the Chamber of Commerce, both demanding open borders, an illegal flood, amnesty and outsourcing to foreign lands, all to get cheap labor – it also means not having to kowtow to their lobbyists demanding corrupt legislation or no $$$.  “Donations? We don’t need no stinkin’ donations from you lobbyists anymore,” they get to say now.

The two-fer is that in their place are Trump-supporters – GOP politicians are now dependent on them for campaign money.  Better be nice, Capitol Hill guys n’ gals, and do what Mr. Trump and his supporters want.

Meanwhile, the Dems are spiraling down a whirlpool in the River of No Return.   They see their only hope to be beholden to Wall Street and Big Corporate America in a Devil’s Compact – we support an infinite flood of illegals to give you cheap labor, while you get woke against Voter ID laws so illegals can and will vote to keep us in power while we make them dependent on our government welfare checks. 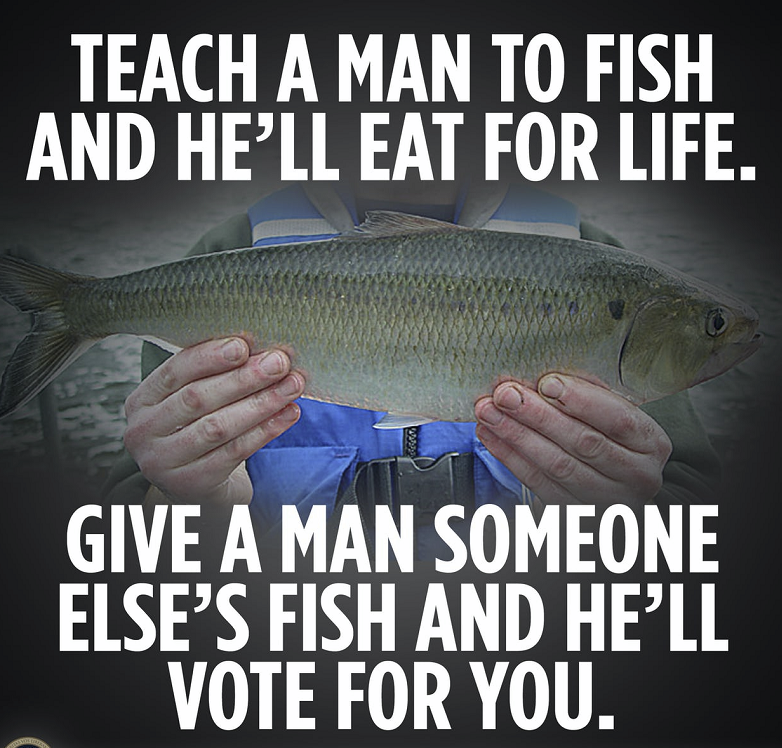 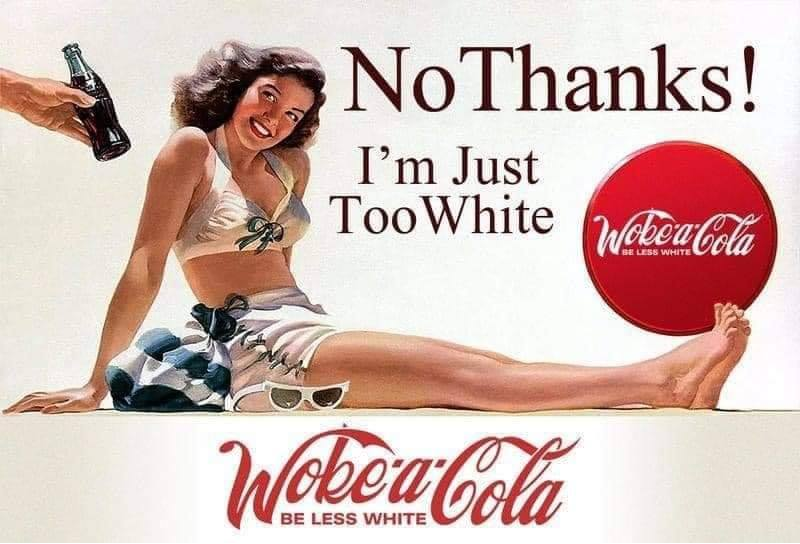 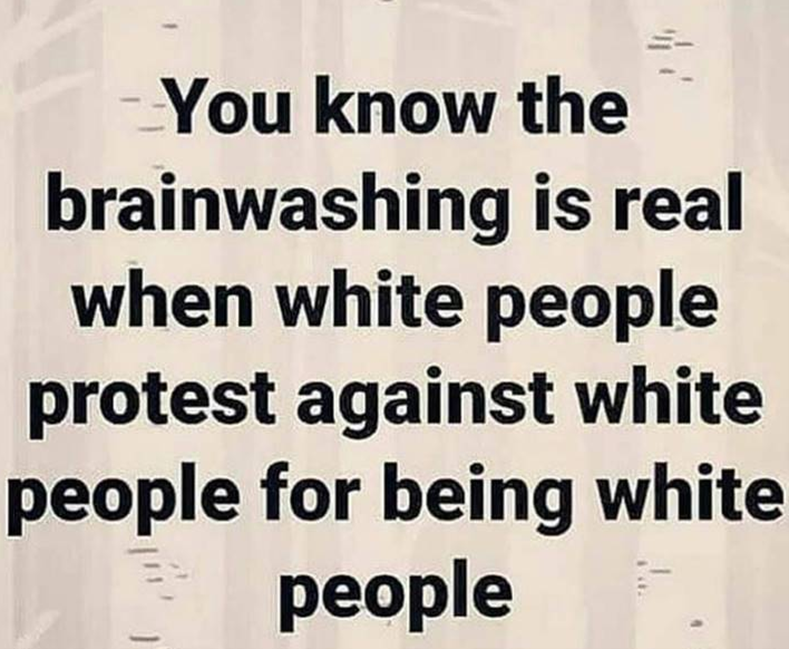 Another must-read.  Corporate America in fascist collusion with government to squelch small business competition through onerous regulation and taxation which it can afford but small businesses cannot – the very purpose of both.

In other words, the Democrat Party is waging all-out war on anyone working for a living, small business that provides most of the jobs, the entire middle class, and everyone in America except the wealthy elite, Deep State bureaucrats, government public unions, illegal aliens, and those addicted to welfare. 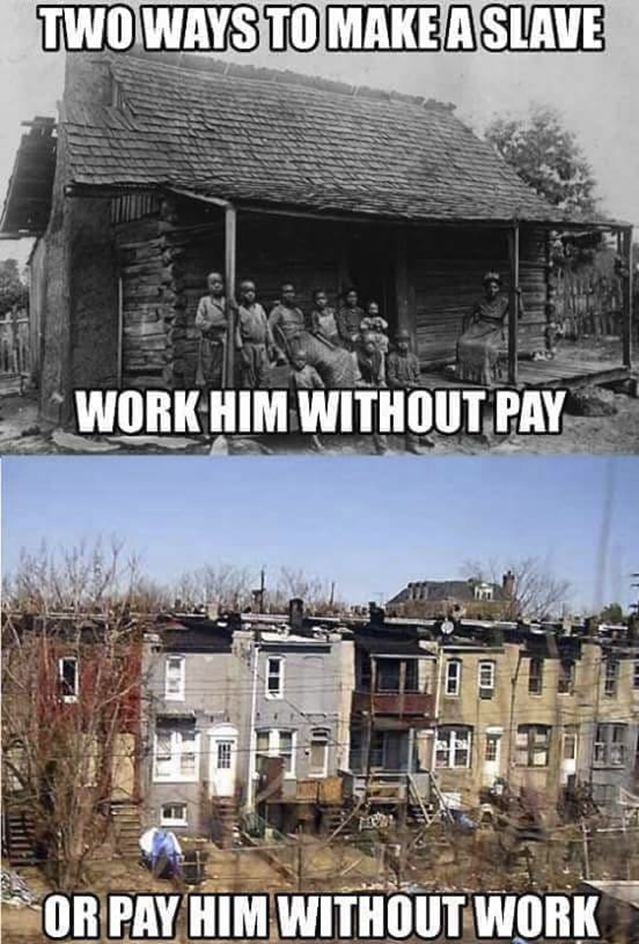 Since those they are waging war upon greatly outnumber those they aren’t, the Dem strategy is open borders and no Voter ID.  Which almost all of the former are passionately against.  It’s the Dem Doom.

Except for this worry.

Last Saturday evening (4/17), President Trump gave a talk at Mar-a-Lago.  Attending were Florida Governor DeSantis and former SecState Pompeo among many other GOP leaders.  He promised to them – and all of us in absentia:

“The question I get asked more than any other question is ‘can you assure us that our vote in 2022 and 2024 will count?’… and we will assure you, we’ll never let that happen again – and we haven’t stopped working on that. By the way, we’re not stopping.”

Nice words, but it’s actions that matter.  There is only one way to prevent the mass industrial Dem voter fraud of 2020 being repeated in 2022: 1) Pass strict Voter ID in all red states and as many purple states as possible; 2) Eliminate Dominion voting machines and similar electronic fraud methods; 3) Enact legislation assuring independent oversight of vote counting.

So, where is POTUS on this? “Where” means physically not rhetorically.  He should physically be in Georgia, Arizona, Michigan, Wisconsin, Pennsylvania and elsewhere speaking to their GOP-majority legislatures rallying them to pass these laws and support them when they do.

He’s got the dragon energy to do this but so far he’s not.  The fear is that he may be turning into a grumpy old man who’s all complaint and no solution.  Pray that this isn’t the case – because only he can hold his 80+ million supporters together, the only force that can save America.

America really is at a truly historical tipping point right now – which can tip either way.  Two contrasting examples.

Here is the text of HB1674, now official Oklahoma state law. You’ll enjoy reading it entire.  The most enjoyable provision:

“A motor vehicle operator who unintentionally causes injury or death to an individual shall not be criminally or civilly liable for the injury or death, if:

How cool is that?? Bravo!!  Of course, all Antifa/BLM undies are twisted into Gordian knots. 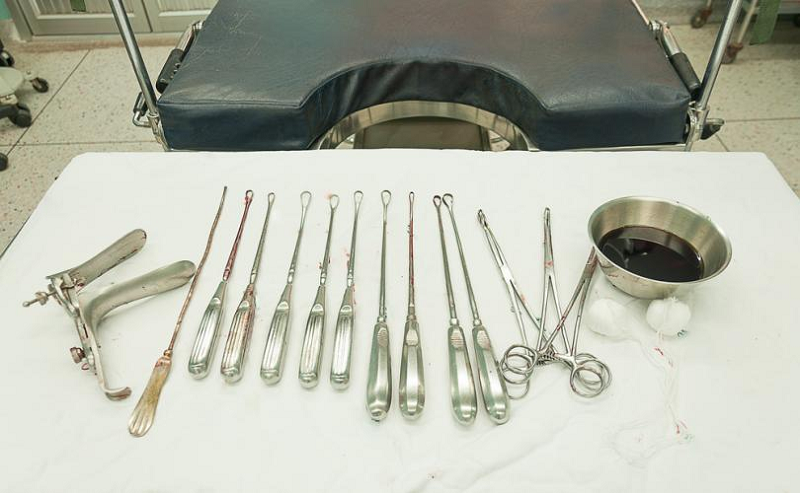 This is a horrific example of the pure distilled essence of evil characterizing today’s Democrat Party.  All Normal Americans should notify anyone they know who’s “Woke,” “Progressive,” or “Democrat” of this Warning:

Please Reconsider Your Convictions As The Future Will Judge Them As Harshly As the KKK and Slavery Is Judged Today.

Oh, and perhaps you were greeted this morning (4/23) by the Daily Mail’s cheery headline: How Biden’s climate plan could limit you to eat just one burger a MONTH, cost $3.5K a year per person in taxes, force you to spend $55K on an electric car and ‘crush’ American jobs.

“Insane Total Fascism” doesn’t begin to describe how deep in the pathological pit the Dems have fallen.  So we come to the last “must-read” in this HFR and the most important:   It’s:

Globalists Will Need Another Crisis In America As Their Reset Agenda Fails, by Brandon Smith on Alt-Market.  He describes what’s happening throughout the world today as the only people on earth preventing the Globalists in cahoots with the Chicoms from creating a fully centralized global tyranny are… us, Normal Conservative Americans.

“Conservatives believe in limited government, true free markets, individual liberty, the value of life, freedom of speech, private property rights, the right to self defense, the right to self determination, freedom of religion, and the non-aggression principle (we won’t harm you unless you try to harm us). None of these ideals can exist in a globalist world.”

“They tell themselves and others that they are “philanthropists”, that “they know what is best” for the rest of us. They believe themselves superior and therefore it is their “destiny” to dictate and micro-manage society for the “greater good” of us all. But really, when we witness their methods it becomes clear that they have no noble aspirations. They have no empathy or honor. They don’t care about the average human being, or the environment, or the economy or society in general. They only care about themselves and their delusions of grandeur. These people are a cancer on the rest of civilization.”

His thesis is that their “Great Reset” for global totalitarianism has failed because we are in the way, having rejected “global warming aka climate change” as experientially ridiculous, and committing the sin of losing our fear of Covid. Thus they must invent a new fear – Covid mutations, cyberwar shutting down the world economy,  real kinetic war – to bring us back in line.

This is why China Joe – Zhou Xiden – and the Dems who control him are so desperate to destroy us and everything good and decent about America.  This is the source of their obsession with “gun control” – for as long as we are armed with billions of guns and trillions of ammo rounds, we remain in their way.

And hear this:  We always will be in their way.

We close with returning to Chris Cuomo – and believe it or not, who we look upon as the biggest woketard at CNN, Don Lemon.

You’ve all seen the pics and videos of a giant 230-pound Black teenager, Makia Bryant, having stabbed one Black lady about to stab another, wielding a large knife attempting to kill her. 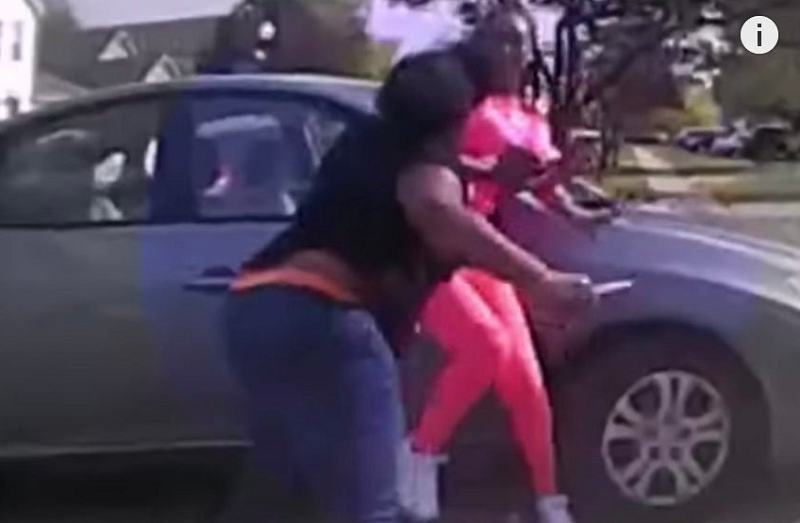 Before she could do so, she was shot to death by Columbus Ohio police officer Nicholas Reardon, saving the life of the lady in pink you see.

Of course, because the police officer was White and the murderous girl was Black, the media went bananas-narrative about White racism and “killer cops.”

Except Cuomo and Lemon.

Here’s the Newsbusters report on what happened last night (4/22) on CNN:

“While doubling down during Thursday’s CNN Tonight handoff on their support for Officer Nicholas Reardon’s decision to shoot knife-wielding Ma’Khia Bryant, CNN hosts Chris Cuomo and Don Lemon blasted outlets like NBC who didn’t show the knife in Bryant’s hand while reporting on the shooting. The pair accused such outlets of “journalistic malpractice” because they weren’t being honest.”

Both these guys are going straight up against the woke narrative.  Good for them.  Folks, there really is hope here.  These guys have the capacity for integrity.  They don’t have to be on the dark side.

We close with this heartwarming story about Chris Cuomo, His Wife, and their Three Kids.  What a wonderful family.  His thinking is tragic but his character isn’t.  We just have to reach out to people like him in a Christian loving way in hope they will see the light.

That is how to achieve a Normal America.