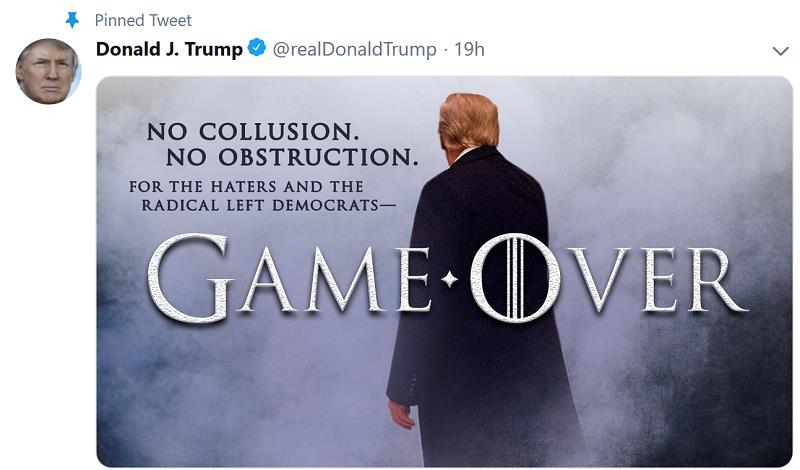 Happy Good Friday!  This is a day of celebration for all Christendom – as the ancient Catholic catechism says, on this day, “Christ showed His great love for man, and purchased for him every blessing.”

And tonight, Passover begins for Jewish people around the world.  Pesach Sameach!

Coincidentally, this is a good Friday for America, as proclaimed on the cover of today’s (4/19) New York Post: 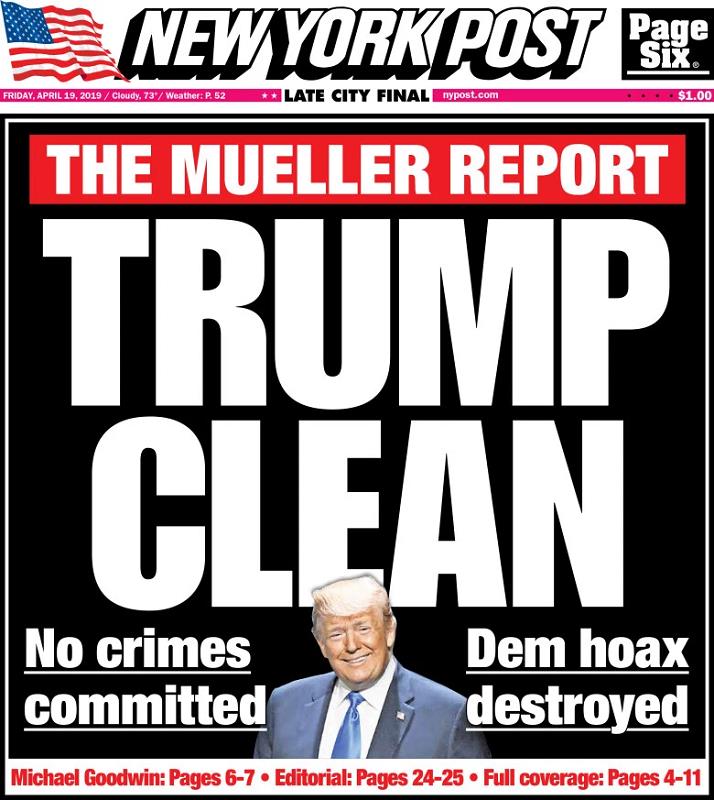 Don’t stop, however, at just the Post cover.  Read the editorial page where you’ll find, Verdict’s In: It’s A Complete Exoneration for Trump, by the Post Editorial Board.  And don’t miss Michael Goodwin’s Release of Mueller Report Finally Sets Trump – and America – Free.

The most must-read today is Kim Strassel’s Mueller’s Report Speaks Volumes.  It’s so important that it’s up on TTP this morning.

What Kim points out is so astonishing she made me recall the famous 2011 book by Harvey Silverglate and Alan Dershowitz, Three Felonies A Day: How the Feds Target the Innocent.  It’s a terrifying book when you realize how Stalinist our federal bureaucracy has become, matching the pledge of Stalin’s secret police chief Lavrenti Beria: “Show me the person and I’ll show you the crime.”

It’s what POTUS alluded to this morning:

The astonishing point is that with that mountain of federal statutes, Mueller-Weissmann could not find one with which to criminalize the President.

So much for the theory that Mueller was covertly on Trump’s side.  He and his team really did conduct a fanatical Witch Hunt against the President of the United States and failed.

Yet Mueller did succeed in the other fundamental purpose of his investigation:  to cover up the criminality of Obama’s FBI, DOJ, and CIA, and that of Hillary Clinton and her campaign.

That means The Game Is Not Over.

On November 10, 1942, Winston Churchill gave a speech celebrating the first British victory over the Nazis in World War II, at the Battle of El Alamein.  Here’s the famous quote in context:

This battle was not fought for the sake of gaining positions or so many square miles of desert territory. General Alexander and General Montgomery fought it with one single idea. They meant to destroy the armed force of the enemy and to destroy it at the place where the disaster would be most far-reaching and irrecoverable.

That is where we and the President are now.  Trump has won a battle, not a war.  To win that war, he must destroy the enemy with disaster that is the most far-reaching and irrecoverable.

Democrats and their media propagandists really are the enemy of America.  As Breitbart documents this morning, they are tripling down on their attacks on the President.  The only way he and Attorney General Barr are going to survive is to go on the attack with a full court prosecutorial press on the entire cabal of treasonous coup-plotters.

Last night on Hannity – sorry, I can’t get the video clip – Sara Carter predicted an “avalanche” of indictments of the coup-plotters, Sara saying her sources tell her “people are already turning on each other – senior officials at the FBI and DOJ are throwing their colleagues under the bus to save themselves.”

Greg Jarrett followed by naming names: “If I were James Comey, Andrew McCabe, Peter Strzok, Brennan, Clapper, I wouldn’t be sleeping very well tonight, and for many nights to come.”

Congressman Devin Nunes has delivered up to two dozen criminal referrals to Barr DOJ requesting prosecution for the plotters.

MUELLER BLOCKADE END.
Fake investigations by committee members will not delay what is about to be unleashed.
Q”

“President Trump has been fully and completely exonerated yet again. Now the tables have turned, and it’s time to investigate the liars who instigated this sham investigation into President Trump, motivated by political retribution and based on no evidence whatsoever.

Now that the collusion and obstruction conspiracy theories have been exposed for the pathetic hoaxes they always were, the Obama-era DOJ and FBI must answer for their misdeeds and the scam that they perpetrated against the American people. Justice will be served.”

And just minutes ago, POTUS himself:

Yes!! For this is war with no quarter.  The only way to shut the Left up is to put Comey, Brennan et al in jail – and to follow that up with doing the same with ilk like Adam Schiff and Jerry Nadler.  Deporting Ilhan Omar for lying on her citizenship app that she didn’t marry her brother would help as well.

Today (4/19), Jerry “Teapot” Nadler as House Judiciary Committee Chairman issued a subpoena to compel the Department of Justice to turn over to him the full unredacted Mueller Report.  It’s a sick joke of course, as it would be illegal for Barr to do so and won’t be complied with.

As a fun aside, Nadler’s nickname among staffers on Capitol Hill is “Teapot” – because he’s still fat (240) and is only 5-foot-4.  Remember the nursery rhyme?  Staffers joke that it’s Nadler’s theme song:

Here is my handle, here is my spout

When I get steamed up, hear me shout

Just tip me over and pour me out!” 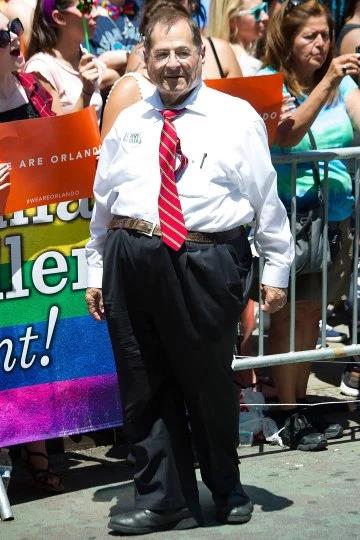 Obviously, Attorney General William Barr is the HFR Hero of the Week.  He’s a straight shooter who follows the law – and he has a spine of steel who won’t be intimidated by media or Dem bullying.  Here’s a clip of key statements in his presser yesterday (4/17):

And here’s how he instantly shuts down an obnoxious lady reporter:

Now check out this from Devin Nunes last night (4/18): 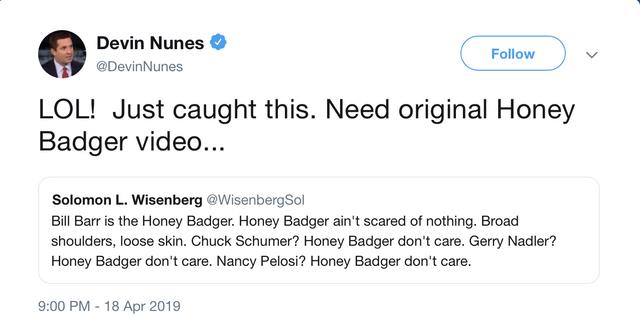 Runner-up to Hero of the Week are the men of the United Constitutional Patriots who are making armed citizen arrests (fully legal) of illegal aliens invading our country across our border in New Mexico.  Here’s the Fox News story yesterday (4/18) – note the outrage by New Mexico’s Demtard Moonbat Governor:

These guys are real heroes who deserve our support.  Please consider support them by clicking here.

Yet there are more reasons for Honey Badger Barr to be the HOTW.  On Wednesday (4/17), Barr Rules Illegal Aliens Must Be Detained During Deportation.

“MAPASTEPEC, Mexico (Reuters) – Amid pressure from Washington, Mexico is backpedaling on promises of better treatment for Central American migrants, leaving hundreds stranded in unsanitary camps near its southern border and allegations of irregular detentions.”

We’re still not done on Wednesday – when Ben Carson’s HUD Cancels Public Housing for Illegal Aliens.  Big day for winning!  You can bet AG Barr gave the nod of approval for all of it.

Actually, it’s been a big week for winning – all week long, starting with Trollmeister Trump triggering the socks off every Looney Leftie Libtard in the country last Friday night after the HFR went to bed. 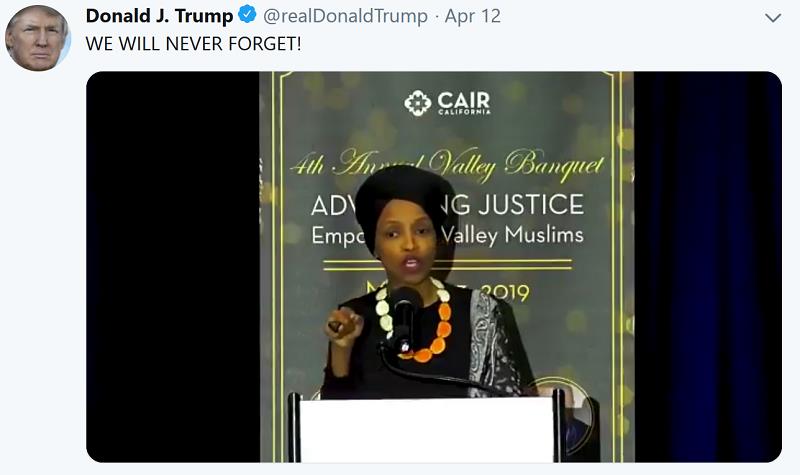 The screenshot can’t play the video so here it is.

In 48 seconds, he just destroyed this Islamofascist Anti-American insult to Congress.  The explosion of libtard anger was deafening.  But here’s something strange.

A little bit later that night, POTUS tweeted this:

This is the President of the United States agreeing with calling a Member of Congress a “sick monster” – which she is.  What’s strange about this?  No leftie outrage – it’s like all Libtardom was blinded by it.  Maybe because when you watch the video, you realize just how revoltingly sick this disgusting woman really is.

Speaking of sick monsters.  Last Friday morning (4/12) at the Mall of America in Minneapolis, a black Somali Moslem (like Ilhan Omar although he may have been born in Chicago of Somali parents) picked up a 5 year-old white boy named Landen Hoffman and threw him off the third story balcony to hit the stone floor 40 feet below.

The monster’s name is Abdisaid Mohamed who goes by the alias Emmanuel Aranda.  He lives with his fellow Somalis in Ilhan Omar’s district.  She of course has not said a word of sympathy or support for Landen nor a condemnatory word of Abdisaid.

Yet on this Good Friday there is good news about Landen.  The little boy suffered multiple fractured bones in his arms and legs, was bleeding from the head and had massive head trauma.  Thanks to the heroic efforts of everyone at Minneapolis Children’s Hospital, the local Fox 9 News reported an announcement by Landen’s family this morning (4/19):

“We have good news to share with you on this Good Friday.  Our miracle child is showing real signs of recovery. New test results have been positive, though he remains in intensive care with a long road ahead. Our faith in God, and our Savior Jesus, is strong, and we are gaining more reason for optimism day by day.

We continue our appeal for privacy as we focus on our son, and thank you for respecting our wishes. Just know that we absolutely feel your overwhelming love, prayers and support, for they seem to be working. Thank you so much from the bottom of our hearts.”

A GoFundMe campaign, LandenPrayers, has raised $880,000 – a tribute to the never-ending goodness of American hearts.  On this Good Friday, we can support and pray for Landen’s recovery – and be thankful for the existence of the most moral nation ever to grace this Earth – our America.

Yet our culture has fallen into an abyss of moral decay.  Nowhere was this made more clear this week than by the phoniest ersatz pretend “center-right” pundit in the country, David Brooks.  On Wednesday (4/16) on MSNBC, he had the gall to claim America wants “a moral cleansing” from Trump.

Talk about living in the Libtard Bubble.  His claim is the best Hahahaha of the Week.  David, you blind mental defective, America wants a moral cleansing BY Trump, not from.  The great majority of Americans want the sickness of the Left washed away.

Which is why, David, Trump will be landslide elected in 2020 to do exactly that.

Happy Easter and Happy Passover to you all. 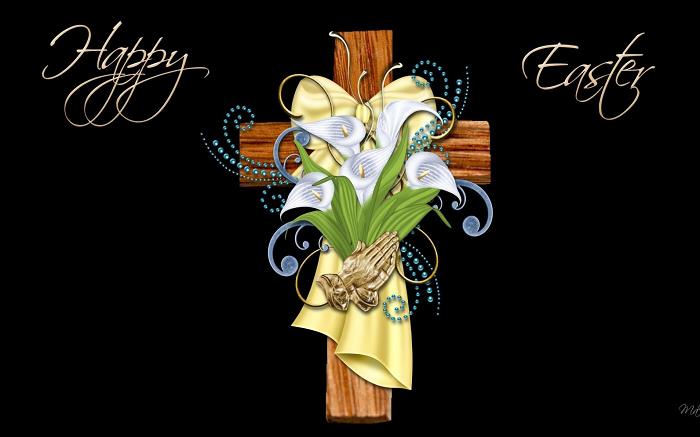 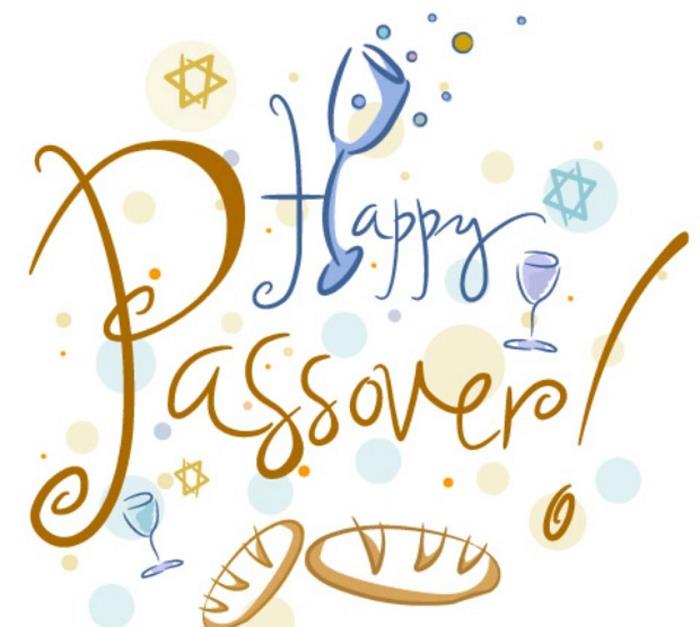