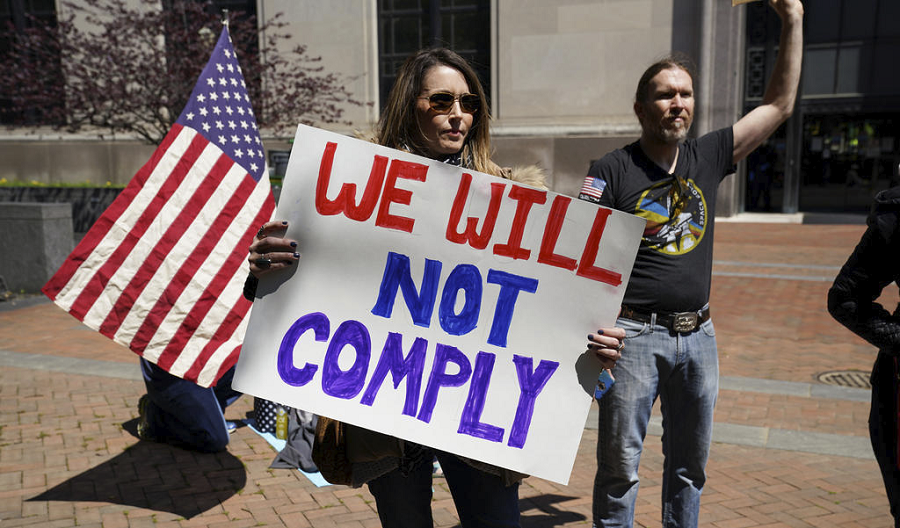 America is back!  That is the thrilling message of this week.  After all the stories we’ve been hearing about Americans meekly submitting to lockdown tyrannies with state and local fascisti arresting, fining, and abusing them for trying to behave normally, we get this from millions of us announcing WE WILL NOT COMPLY.

How American can you get?  Standing up for freedom.  Standing up to tyranny.  We are witnessing the emergence of a Great American Revolution against fascist government control of our lives.  It doesn’t get better, more hopeful, more optimistic for our future as a people and as a nation than this.

It dashes the dreams of Democrats to use the virus pandemic they created as an excuse to destroy our economy and replace it with a Marxist-Leninist system in which they give the orders and we must obey.  Sorry, Leninistas, we will not comply.

The headlines are a joy to behold, for what they announce and for a scared, angry Enemedia denouncing them.

The London Telegraph (4/16):  ‘Release us!’ Coronavirus lockdown protests break out across America, with some featuring flags and guns

Sky News (4/17):  Coronavirus: Wave of US anti-lockdown protests call for lifting of restrictions

New Yorker (4/16): The Lockdown Backlash May Be the New Tea Party Movement

Snarkiest of all is the London Daily Mail (4/16): Protesters in MAGA hats and flying Confederate flags swarm Michigan, North Carolina, Ohio, Utah, Wyoming, New York and Virginia to demonstrate ‘tyrannical’ and ‘unconstitutional’ lockdown orders that are ‘worse than the virus’

The number and size of these protests will now grow immensely, as POTUS greenlighted them to do so this afternoon (4/17):

Immediately, the Daily Mail had this headline up: 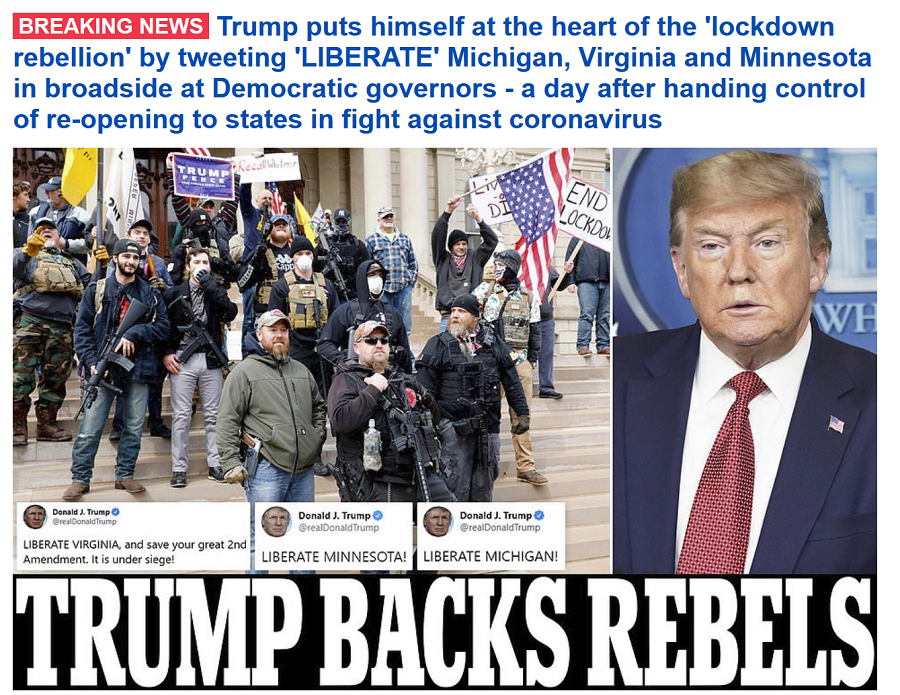 Yes, El Donaldo’s genius is firing on all cylinders.  Yesterday evening (4/16) in the White House briefing in announcing his plan for Opening Up America Again, he gave control on how to do so to the Governors:  “They can start opening up tomorrow to get their people back to work, or they can wait until they’re convinced it’s safe.”

Brilliant – the onus is on them, and it’s Open Season on the Dictator Govs and Mayors.

So Jacksonville’s Mayor opened up city beaches this afternoon (4/17).  Ohio Gov Mike DeWine will open up his state on May 1. The best governor in America is South Dakota’s Kristi Noem.

The worst – worst governor in America – is Michigan’s Wretched Gretchen Whitmer, who has threatened to extend her total lockdown, and it’s the protestors’ fault. Oh, and she’s declaring abortion an “essential service,” because it is “life-sustaining.”  This protest sign against her is so accurate and well-deserved: 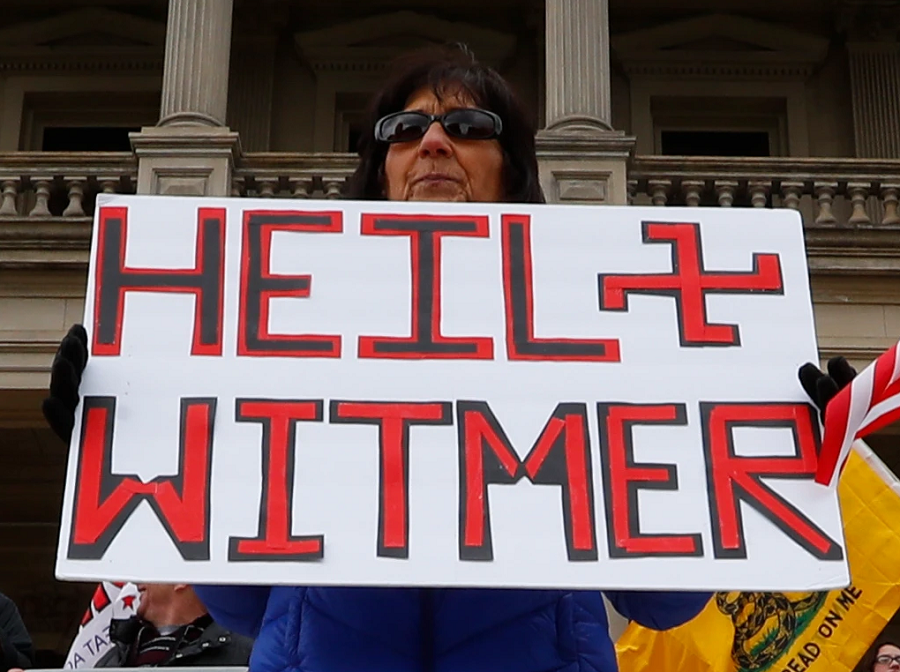 Time for a HFR ALERT!  The absolute best info on this whole dog’s virus breakfast is provided by former New York Times reporter Alex Berenson, who’s writing a book about it.  He’s into a constant deep dive into the real facts and data, which expose the deathly antics of what he calls Team Apocalypse and the Dept. of Pandemia.

This could be why:

And this is where the rubber meets the road: 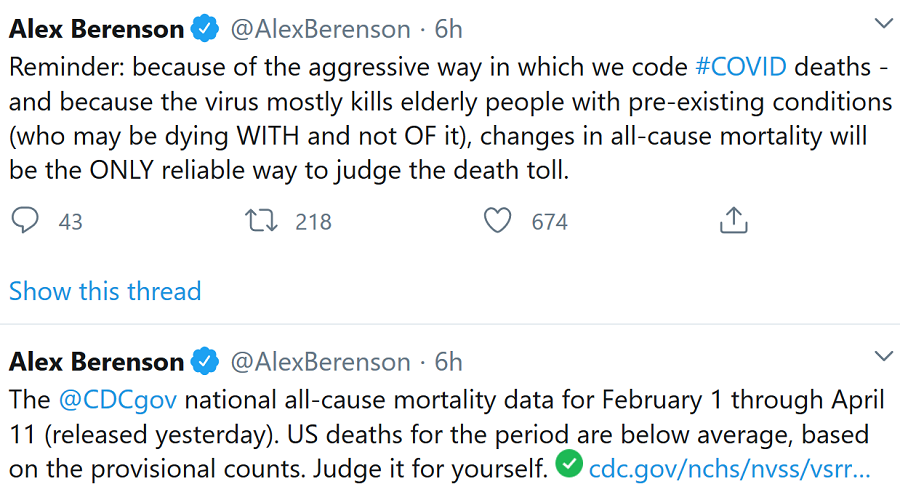 FYI, Alex’s wife is a physician who treats Covid-19 patients.  His twitter feed https://twitter.com/AlexBerenson is a goldmine.

The satanic evil of this contrived virus hysteria goes far beyond wanting to destroy Trump’s reelection.  One of its principal targets is are the oil and gas frackers responsible for the US now being the world’s greatest energy producer.  I asked this question to a TTPer friend in the business:

“WTI (West Texas Intermediate, the US benchmark) is now below $18, right after the 23-country deal to cut almost 10 million bpd.  The Dow and Nasdaq are going up, why isn’t oil?  I’m really concerned now about our whole fracking industry.”

Here is his answer:

“Jack — Your concerns are real. The over-the-top shutdowns over a variation of seasonal flu have dropped demand for oil by 20MM bpd, largest decline ever on record. Supply glut is huge, storage is full across the board. Majors have stopped buying from shale drillers and independents. Double whammy of the Saudi move to pump more oil + CV lockdowns has devastated the industry.

10MM bpd cut is too late to impact the price. Some of the shale E&Ps won’t survive. Even the ones who partially hedged at higher prices don’t have $18 oil in their models (Midland oil is $14; I heard some places oil is negative, similar to gas last year – have to pay to take).

The people I work with have been in the oil business for almost 40 years. They’ve never seen anything like this. Investors have shunned (rightly) the stocks for some time; now they are radioactive. Plus the Left’s successful demonization of fossil fuels as part of their idiotic push for “green” energy raises questions longer term about the industry (of course fossil fuels aren’t going away but the reality of the political climate is an additional headwind).

The most important thing that can be done now is to get Trump away from Fauci and Brix and show him and have him understand the actual data on COVID-19. The institutional models of CV-19 remind me of the climate change doomsayers (Earth will be destroyed by mankind in 10 years).

Amazing we’ve destroyed our economy (with oil industry the hardest hit) in a matter of weeks (less than two months) over what amounts to a flu-like virus. I think the ultimate fatality rate will be under half of one percent. Please do all you can to convince DJT and the governors to unleash our economy and restore freedoms next week. Another month is too long/too late.

I think we can have a “V” shaped recovery if the shut downs end this month. The supply glut will work off eventually. The E&Ps with the best balance sheets will survive. Assets will move into stronger hands. Drilling and fracking will come back. But as for now, enough is enough.”

That’s sobering.  The anti-lockdown protests have to grow and succeed quickly.

There’s an additional incentive for the Dictator Govs to end their lockdowns – by next week in fact.  Six evenings from now with the advent of the new moon – April 23 – Ramadan begins.  Are the fascisti govs going to try and do to Moslems gathering in their mosques as they did to Christians on Easter in their churches, arrest and fine them for hearing sermons from imams as they did for hearing pastors?

Not bloody likely.  This requires well-buttered popcorn to watch.

The contrived virus hysteria has been a Devil’s Dance performed by the Dems and Communist China.  Yet the extent to which this global catastrophe lays at the feet of Beijing is becoming undeniable and acknowledged. Even the Euroweenies have however cautiously begun to denounce the China Virus Coverup.

The must-watch in this regard is Lou Dobb’s interview of Peter Navarro.  Read his bio in the link beforehand – Peter is absolute aces.  Then watch – this is dynamite.  Understand, Peter is POTUS’ go-to-guy in the White House on China.

It’s being called the Monday Media Massacre, when POTUS unleashed this video upon his Enemedia audience at the April 13 briefing.  Enjoy:

Now enjoy how POTUS has been taking the Dems downtown:

Well, that’s how filling your brain up with hate poisons your soul.  Pelosi and Dems in general seem to be competing to see how they can out-stupid each other.  The clearest example of the week is how they – from Bernie to Pocahontas to Michelle Obama to President Zero himself –  have endorsed a mentally defective man to take on Donaldus Magnus.

There’s a lot of suspicion this is to position Michelle to be his running mate.  But that’s another example of the shut down of their pre-frontal cortexes.  If the guy at the top of the ticket gets obliterated in the campaign, who his running-mate is becomes irrelevant.

The TTP Humor File today – Biden Campaign Dementia – speculates that Joe’s dementia has become contagious, infecting his campaign people.  Maybe that’s happened to all these top Dems endorsing him, making his being the nominee all but inevitable.

Either that, or they’re confidant they have an ace up their sleeve – tens of millions of them with illegal aliens voting and other forms of massive voter fraud.

Zero is now insisting on massive mail-in vote fraud.  We fixed his quote to make it say what he really means:

“Let’s not use the tragedy of a pandemic to compromise our democracy.”

Zero’s impossibly corrupt Attorney General Eric Holder is bragging that “The coronavirus pandemic is an opportunity to permanently change the US voting system.”

TTP is being told by those responsible for getting the anonymous Memo to the President on a Solution to Voter Fraud in the hands of Rush, Sean Hannity, Tucker Carlson and others expect they will have it go viral starting next week.  Let’s hope that happens.

For if it doesn’t, this is who the Dems will put in the White House as Zero’s and ValJar’s and Holder’s puppet.  Something to cringe about:

That’s it, folks.  Enjoy all the coming Anti-Lockdown protests, mass civil disobedience, Phase FU.  For not only will it end the Lockdown Dem Fascism, it is only the barest inkling of what will happen if Americans see their electoral democracy stolen from them.  Dems need to think and reflect on that deeply.  For We Will Not Comply