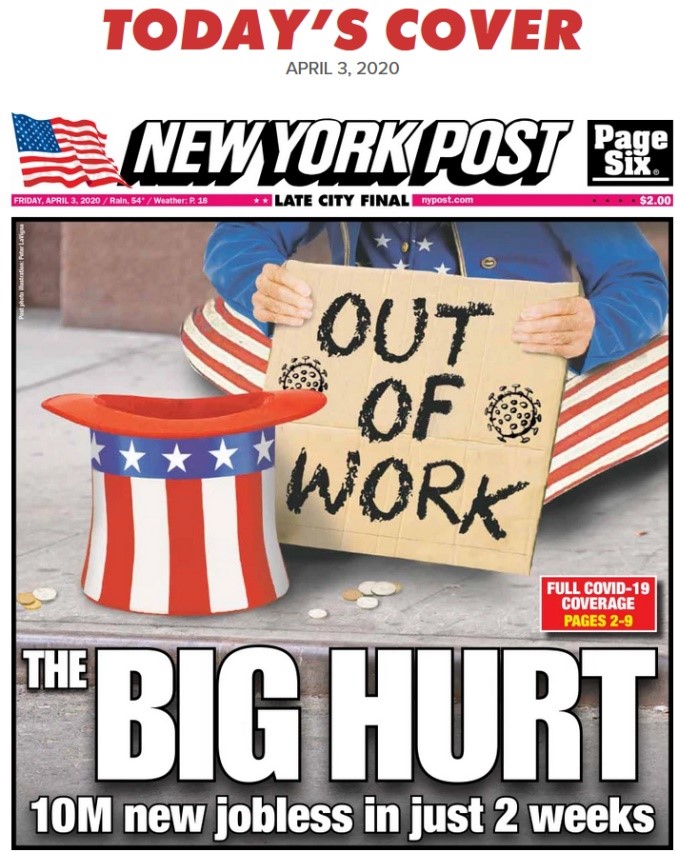 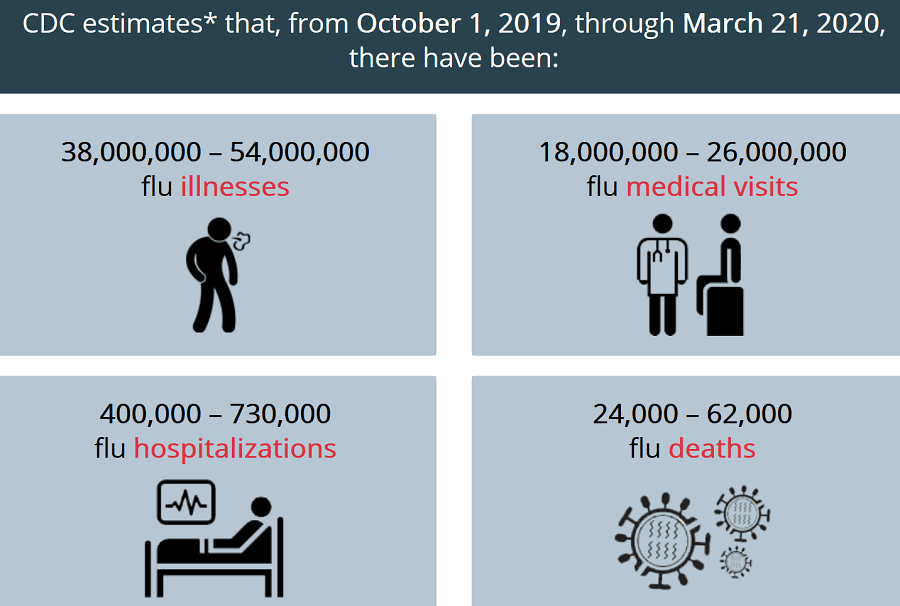 SHUTDOWN THE LOCKDOWNS, MR. PRESIDENT, NOT THE ECONOMY

Working together, the Communist Party of China, the Democrat Party of the United States, and the Left “Mainstream” Media plus Social Media (Twitter, Facebook, Google’s YouTube) engineered a trap for President Trump, and now the trap has sprung.

If he kills the economy by continuing the lockdowns, he will get total blame for the ensuing Great Depression of the 21st Century.

If he shuts down the lockdowns to get people back to work and save millions of businesses, he will get total blame for the thousands of deaths from COVID-19.

This Catch-22 is no accident, comrades – it’s on purpose.  The goal is a two-fer:  Ruin Trump’s reelection so he loses like Hoover did to FDR in 1932, which enables the completion of a Police State Fascist America as we’re well down that path already due to the manufactured coronavirus hysteria.

Here’s how it worked.  It began with the Chicoms realizing in November there was a murderous virus epidemic emerging in Wuhan, a city of 11 million in Hubei province.  The danger represented an opportunity – which was to remain silent about it, refuse to warn the US and rest of the world, and allow or even encourage hundreds of thousands of Chinese, many infected, to travel to the US, Italy and elsewhere for the next two months.

Hundreds of thousands of Chinese nationals traveled to the US in December and January, spreading their deadly virus, while Beijing remained silent.  Thousands of American tourists and businesspeople traveling in China returned home, never having been warned.

When Trump found out, he was the first world leader to ban travel from China to his country – for which the Dems and Enemedia condemned him.  Within hours of his announcing the ban on January 31, Biden and a Leftie chorus accused him of “hysteria, xenophobia, and fear-mongering.”

Then when people began to die – the first in Washington State on February 29 – the Enemedia launched the greatest panic-mongering hysteria the world has ever known, with the Dems shrieking demands for trillions in government spending, and everyone in the country to stop working and stay home.

And dancing with glee that their hysteria caused the collapse of the stock market with millions seeing their 401k’s wiped out.  Of course, the entire “pandemic” and market collapse they insisted was all Trump’s fault.

The front-page headline on the Wall Street Journal this morning (4/03) is: March Job Losses Signal Bigger Collapse.  Our entire economy is in free fall because 6,560 people have died since Feb. 29 – while 78,000 babies have been killed by their mothers in that time (yes, on average there are over 2,370 abortions in the US per day).

Not to mention up to 10 times (an order of magnitude) have died of regular seasonal flu this flu season. Regarding which there was no media-made panic, shutdowns, market collapse, nothing – life proceeded normally.

The cost of the Red China Virus Panic is beyond the staggeringly stupid.  Grassfire Reports estimates in its Coronavirus Cost Estimates the total — so far – could be as high as $32 Trillion, trillion with a T, 32 thousand billion, 32 million million.

Combine that with fascist police state controls over all of our lives worthy of the Chinese Communist Party – or the Democrat Party’s dreams. 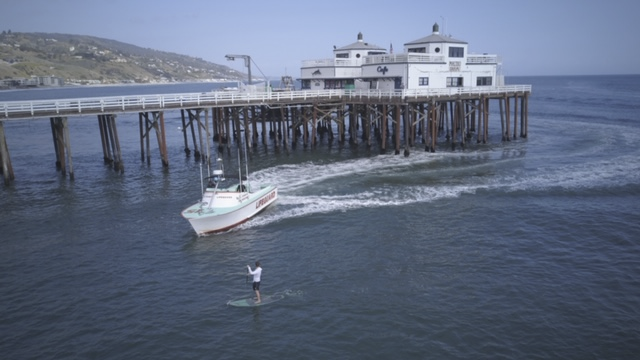 If there’s anything that has to stop, it’s these everybody-stay-at-home orders enforced by cops with guns and judges with huge fines.  This is police state fascism, period.

And it’s certainly not to protect everyone’s health – for hardly anyone without serious health problems like diabetes, emphysema, high blood pressure, heart disease, particularly if they’re under 65, is under mortal threat from Covid-19.

“Could we not have ‘firewalled’ the ONLY statistically vulnerable community — the elderly, and specifically the elderly with co-morbidities?  Instead of pursuing the least disruptive means of controlling this virus, the governments took the most aggressive path that has ever been seen in U.S. history.”

“The majority of coronavirus-related deaths in the city — 1,139 based on the data provided in the release —  involved individuals with underlying illnesses or conditions. Those, according to NYC Health, include lung disease, cancer, diabetes, immunodeficiency, heart disease, hypertension, asthma, kidney disease, and GI/ liver disease.

The data set divides the groups in three categories — age, sex, and borough. It reflected the broader trend of the coronavirus having a more devastating impact on individuals 75 and over. However, it also revealed that, across every age group, the majority of those who passed away as a result of the virus had some type of underlying health condition.”

It’s the same in Italy.  The London Telegraph reports the Italian Health Ministry as saying:

“Italy’s death rate may appear high because of how doctors record fatalities. The way in which we code deaths in our country is very generous in the sense that all the people who die in hospitals with the coronavirus are deemed to be dying of the coronavirus.

On re-evaluation by the National Institute of Health, only 12 per cent of death certificates have shown a direct causality from coronavirus, while 88 per cent of patients who have died have at least one pre-morbidity – many had two or three.”

I have now had three medical doctors (none of whom know each other) personally tell me that a very substantial fraction of deaths attributed to what I call the Red China Virus is due to pre-existing conditions that make them acutely vulnerable to the virus.

A TTPer just sent me this personal experience at a hospital near Inner City New Orleans:

“The ICU that I now work in is all Covid patients, all ventilated with severe septic component & Acute Respiratory Distress system, all black, mostly hood, obese, diabetic, hypertensive & asthmatics, most hang in for a week or two, on a ton of IV drips, then they deteriorate in a few days. We recommend the family members to make them No Codes, Do Not Resuscitate. Worked last Sunday, 7am- 7pm, 4 died on that shift. They will likely make all of our surgeries suites ICU beds before this is over.”

What POTUS has to do now is say: “We are refocusing our attention on those most vulnerable, and let everyone else go back to work and living normally, albeit with hand-washing, hand-sanitizing, no-face-touching, social-spacing precautions.  All community and state-wide stay-at-home lockdowns are hereby prohibited.  We are going to care for the sick while the rest of America goes back to normal as much as possible.”

And he has to tell that little fascist squirt to shut up about demanding the entire country in every state should stay at home.

It is America’s economy that is dying, not Americans in vast numbers from the Red China Virus.  POTUS has to escape from the trap the Chicoms, the Dems, and the Enemedia have laid for him.  Pray that he does so and quickly.

And it looks like what we hoped for on Tuesday (3/31) in Is The Media About To Make Trump The Unbeatable Hero Of The China Virus Crisis? may be coming to pass.

This is a serious survey of over 6,200 physicians treating covid patients in 30 countries: Largest Statistically Significant Study by 6,200 Multi-Country Physicians on COVID-19 Uncovers Treatment Patterns and Puts Pandemic in Context.

But what’s with the stupidly small 23% in the US?  Another reason the little squirt next to POTUS in the briefings arguing for caution instead of doing what you need to save lives needs to shut up.

“People that received 5 days or even four days of this hydroxychloroquine-azithro regimen wouldn’t get intubated (needing a ventilator)… It’s a game-changer.  An absolute game-changer.  Laura, I think this is the beginning of the end of the pandemic.”

So there is light at the end of this tunnel.  But is that light the Democrats’ police state train steamrolling over our rights and freedom, or is it Trump’s signal light leading the way back to the freedom and prosperity we once took for granted?

Next Friday will be the Good Friday HFR, and by then we may know – or know a lot more.

Meanwhile, can’t resist closing with what has to be the most scrumptiously funny story of the week.  A German cruise ship – a passenger cruise ship albeit with a reinforced hull for polar expeditions – was sailing in international waters in the Caribbean on Monday (3/30), when it was approached by a Venezuela Navy warship.

The Venezuelan warship fired gunshots at the German cruise ship, then purposefully rammed its starboard bow – and promptly sank.

Yes, a Venezuela Navy warship rammed a cruise ship and sank.  Not the cruise ship, it suffered minor damage, but the warship.  Now how cool is that?

Especially since it comes days after POTUS placed a $15 million bounty on the head of Venezuela Dictator Nicolas Maduro.

God bless our President.  Please send him your prayers.