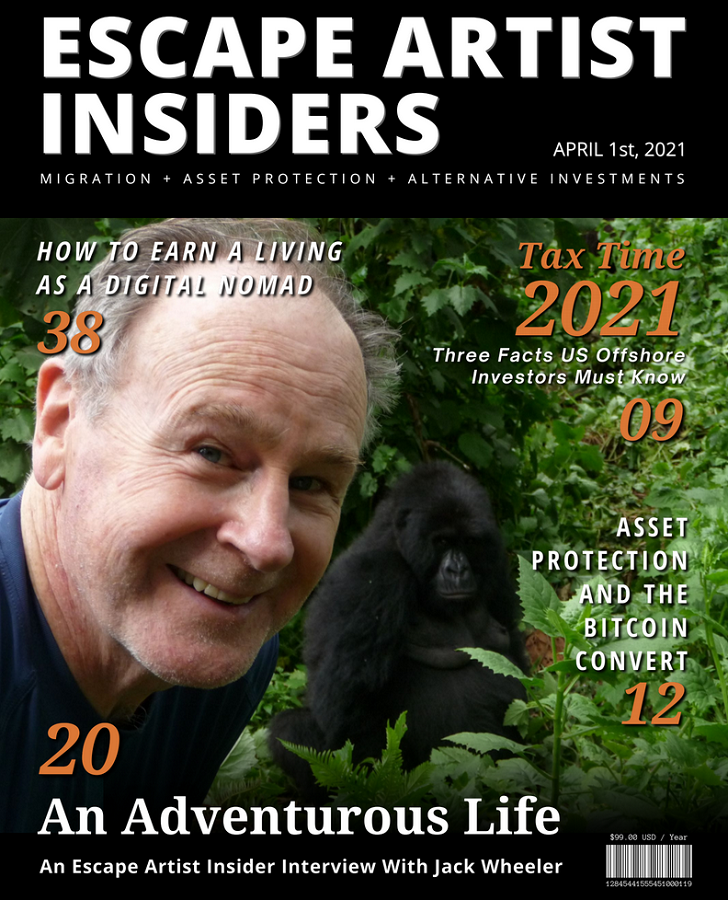 Welcome to the Good Friday HFR!

Yes, I admit to the self-promotion above.  My friends at Escape Artist invited me to do an interview cover story for the April issue of their Insider magazine.  Click on the link for the full issue, for they have kindly provided it free to all TTPers.

While you can scroll down to page 20 for my interview, you’ll also find a number of valuable articles, like Asset Protection and Bitcoin and How to Bulletproof Yourself from Cancel Culture.  There’s a lot of cool info here – I hope you enjoy it.

If you do, consider subscribing to Escape Artist Insider, issued monthly.  I think it’s well worth it.  They also issue an online free Escape Artist newsletter semi-weekly.

Their orientation is primarily to offer international escape from woketard insanity ruining our country.  Obviously, there’s an increasingly large and growing audience for that.  I’ll be suggesting to them that, in addition, the editors feature the best places to escape from leftist loonies in America.  Best places (and those to avoid) in red states like Florida and Texas, best red counties in blue states like Nye in Nevada.

Please let me know what places in the US you think they should feature and I’ll pass it on to them.  For the key goal right now is to gain our normal freedom again here at home while we still can.

For the day is not far off when we’ll need exit visas – government permission to leave the country.  The US is currently one of the very few countries in the world that has no Airport Passport Control on departure – only on arrival like everywhere else.  The Dem fascisti will be changing that.  Owe any money to the IRS?  Bad woke social credit score?  Sorry, you can’t leave.

That’s what’s coming, with so much more and so much worse.  So we’ve got to create and/or escape to freedom sanctuaries in cities, counties, and states across the country.  Gov. Ron DeSantis announced yesterday (4/01) he is doing this in Florida, to protect his state from Xiden turning all of America into a “sanctuary country for illegal aliens.”  Hands down, he’s the best governor in all 50 states now.

As you know, I’ve been writing a TTP column on Mondays, Keeping Your Sanity.  It’s critical we Normals keep ours, as the Abnormals are losing theirs.  This is neither metaphor nor hyperbole.  I mean they – from pajama-clad soyboy woketards on Twitter to senior leadership at the FBI, the Pentagon, and the entire Xiden White House – are becoming literally mentally ill.

“The new department regulations allow transgender people who meet military standards to enlist and serve openly in their self-identified gender, and they will be able to get medically necessary transition-related care [meaning “sex reassignment” surgery, very expensive at taxpayer expense]”

The Pentagon becomes the Trannygon.  Let’s be clear.  We no longer consider homosexuality a mental illness – but self-mutilating gender dysphoria definitely is.

Why this day (3/31)?  [FPX] Displays Transgender Flags at the White House to Celebrate ‘Day of Visibility’

This is not just clinically insane – it is criminally insane, treasonously insane.  To promote and praise mental illness as normal is bad enough.  To make taxpayers pay for it is criminal theft.  To do this to our military and its priorities is treasonous.  Can you imagine the bottomless contempt the Chicoms have for this?

What’s hard to imagine is what our country is going to be like a year or two from now, after less than three months of this illegitimate government, fully insane with criminal intent to ruin and destroy their own country.

They weren’t angry over the Big Three’s censorship of conservatives or POTUS supporters.  Oh no, they were angry there wasn’t enough. As Ed Markey (D-Communism) exploded at them:

Here is Lizzie Fletcher (D-Toadbrain), questioning them on Zoon from her bedroom as to why they don’t censor “domestic terrorists” (i.e., Patriotic Normals) like they do ISIS and Al Qaeda.  You have to watch it to believe it.  This woman literally belongs in a mental institution:

The next morning (3/26), the New York Times promptly echoed the Dem condemnation of “unfiltered” media content the Left does not control: 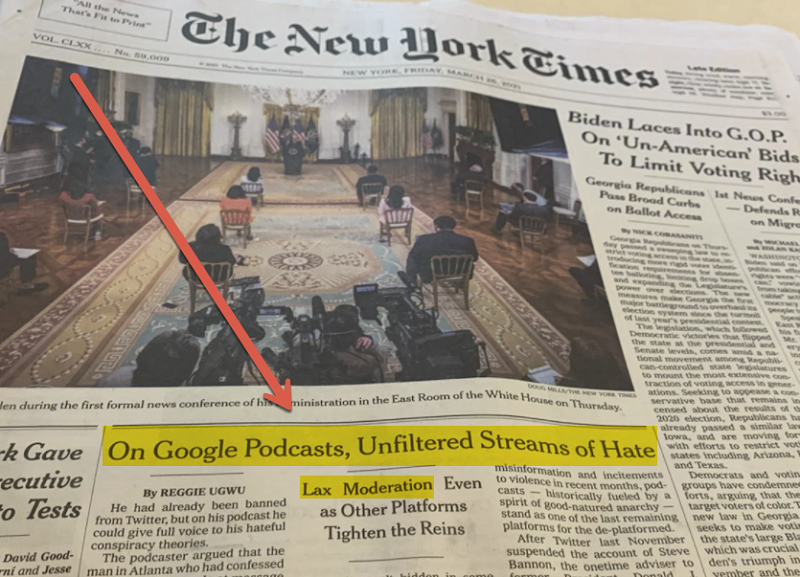 This is criminal fascism, bald, pure, and simple. Skye yesterday wonders what the Big Tech Three will do in response.  They have to elide the Dems’ demands because their business model requires they keep most Normals online for target advertising revenue.  Now that censoring some for show no longer mollifies Dems, they’ll have to mollify them another way.

What worked best for them was censoring any mention of election fraud – claim it and you were automatically banned.  So what they’ll do now is start censoring support for Voter ID laws as “anti-democratic voter suppression” and other efforts to prevent mass Dem voter fraud in 2022.

Being able to cheat across the board in House and Senate elections next year as they did against Trump last year is the single most important issue for Dems as it’s the only – only – way they will keep their congressional majorities.

As TTP says repeatedly, we are rapidly moving towards a ruling system of full actual real Fascism as defined by Mussolini, Big Business in full collusion with Big Government for full fascist control over our lives.

You could not get a more gin-clear example than the full court press Corporate America is waging against Georgia’s new Voter ID and reform bill, in lockstep with JoeBama’s vicious lying “Jim Crow” denunciation.

The Wall Street Journal ridiculed Coke and Delta CEOs this morning (4/02) in Woke and Weak CEOs.

WSJ Editor Kimberley Strassel, also this morning, explained, ID requirements are no more racist at the ballot box than on a Delta flight.

“According to Delta CEO Ed Bastian, there is only one reason Georgia passed a voting reform: to suppress the votes of black Americans and other minorities. Georgia’s Republican Legislature used the “excuse” of voter fraud to “make it harder for many underrepresented voters” to “exercise their constitutional right to elect their representatives,” Mr. Bastian wrote this week in a memo to employees.

Mr. Bastian has plenty of company in the C-suites. Some 72 black executives, including the CEO of Merck and a former CEO of American Express, signed an open letter calling on corporate colleagues to fight “undemocratic” and “un-American” GOP efforts across the states to “assault” the “fundamental tenets of our democracy.” Coca-Cola, Microsoft and Apple chimed in, and dozens more are readying outraged press releases. Nancy Pelosi couldn’t be more thrilled.”

John Nolte at Breitbart accurately looks upon them as a “Woke Gestapo” — Woke Gestapo at Coke and Delta Wage War Against Voter Integrity Laws (4/01).

Delta and Coke are HQ’ed in Atlanta, while America is in Dallas. Thus, this morning (4/02) at Hot Air: American Airlines Slams Texas Election Integrity Legislation.

Plus this, this afternoon: MLB Caves to Biden, Moves All-Star Game in Response to GA Voting Law.

So you can be confidant that all three Big Tech Nazis will soon be out in front leading this parade.  As you well know, this fight is for the whole enchilada.  If the Dems get away with this scam and can cheat their way to victory in 22, what chance does 45 have to be 47 in 24?

Turns out, 36 states already have some form of Voter ID, only 14 do not.  Georgia and Texas are just trying to tighten theirs up —  but note Wisconsin. Dems managed to steal it from POTUS even with strict photo Voter ID. 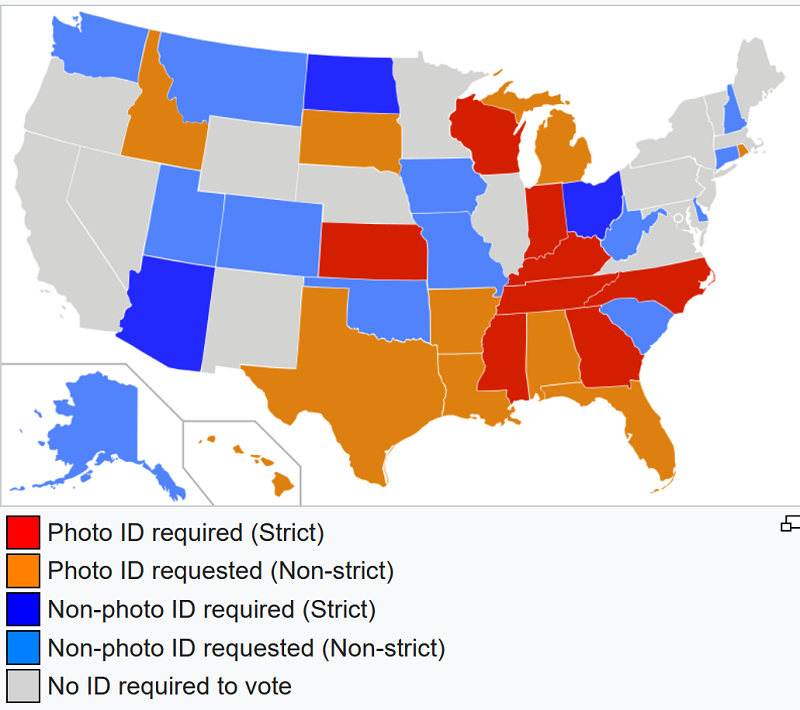 Note also that all state Voter ID laws have been okayed by the Supreme Court.

The whole Dem game plan is to intimidate Corporate America into supporting their Woke Agenda and the Dem donor class into keep donating to it; fool the Dem working class into keep supporting it while screwing it; keep the welfare dependent class on it, with confidence that GOP Establishment has neither the brains nor balls to call them on it.  Working so far.  Only PDJT is in the way.

That’s why we better hope his response to Lara Trump’s query in his interview with her — So maybe we don’t even need social media? – which was: “I don’t think we do,” that “press releases” would be better – was a head fake.

I was hopeful it wasn’t when a TTPer friend sent me the website DJTUP yesterday and encouraged me to sign up, which I did immediately: 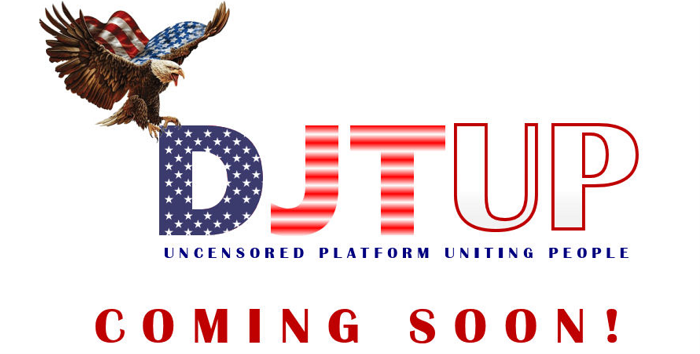 Guess what? That was yesterday – 4/01 – this is the disclaimer on the site today:

I was crushed.  POTUS had better realize quickly the gargantuan power he has to mobilize 80 to 100 million Americans to fight for him, for freedom, for America, for their personal prosperity and his in the centi-billions.

Frankly, that interview showed he may be blind to this, as all he did was complain how he got screwed last November, not what he could have done to prevent it, and how this ridiculous senility in his place is screwing America, not his solutions to it.

So, I am preparing a brief on these solutions, adumbrated in last week’s HFR, on how he can rescue America, make us Normal,  Free, and Prosperous again, while making himself the world’s first true trillionaire.  We hope to present it soon to him at Mar-a-Lago.  Wish me luck.

A couple of notes before we close.  Sanity XI was on the importance of hydration.  Skye’s comment on the Forum was so important I want to make sure you all see it:

“Yes, hydration and electrolytes are really that important, especially with advancing age.  Alzheimer’s, Type 2 Diabetes, Parkinson’s Disease, and many other complex diseases of aging involve condensation of normally present proteins into abnormally folded cell killing insoluble gunk, and this condensation is promoted by inadequate hydration.

That isn’t the only cause of these diseases, but it is an important factor, and one that is very easy and cheap to correct. As Jack said, as you get older, your sense of thirst becomes less sensitive, so that fact that you don’t feel thirsty doesn’t mean that you are imbibing enough H2O.

End stage renal disease – kidney failure – is another common age related killer.  Your kidney function will decline with age, and if nothing else gets you first, it will eventually kill you.  The more concentrated your urine is, the faster your kidneys deteriorate.

Drinking 3 liters of water per day will help to make your kidneys last.  Keep a graduated pitcher in your fridge so that you can keep track of your fluid consumption.  The healthy lifespan that you extend will be your own.

If you want an added benefit from your hydration, I recommend saturating your water with dissolved hydrogen gas.  Hydrogen gas is a remarkably effective and highly selective destroyer of two powerful age damage causing oxidants, the hydroxyl radical and peroxynitrite.  Both are inevitable toxic byproducts of normal metabolism.

Add any electrolytes AFTER use of this device.

This is such a perfect example of the value of the TTP Forum.  Please take advantage of it, as you just can read the comments, you don’t have to comment yourself.  But feel free to tell us what you think – no worries, this is your TTP family, you’re among friends!

Second is regards Sanity VIII on the importance of listening to great music. TTPer David Rutherford noted that the recoding posted of Benny Goodman’s Sing, Sing, Sing! was not the one at Carnegie Hall.  I meant to replace the mistake but forgot.  My apologies, David!

I must have listened to my father’s LP recording of the original January 16, 1938 Carnegie Hall performance 100 times growing up in the 50s.  This is it, David.  It’s on Sanity VIII now, and here it is for you and all TTPers.

This is what many consider the greatest jazz masterpiece of the 20th century.  I certainly do.  Speakers to the max!

And to all – Happy Easter!  The most joyous occasion in the history of Christendom!