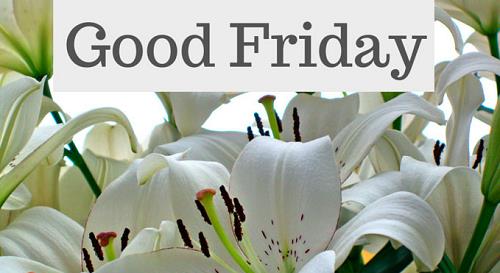 Welcome to the Good Friday HFR!

Kind of weird to wake up on this particular morning to see the Drudge headline:  Pope has declared there’s no Hell.

While the Vatican quickly claimed he was misquoted (a typical politician’s non-denial denial) –  not a “faithful transcription of the words of the Holy Father” – nonetheless, it may reopen investigation that this papacy is illegitimate.

You may recall from the Happy New Year HFR three months ago (12/29/17) the substantive accusations of Obama engineering a papal coup:

*March 8, 2017: According to Archbishop of the Catholic Church Luigi Negri, Obama conspired with George Soros in a plot to force Pope Benedict XVI to resign in 2013 and replace him with a Marxist Pope.

*January 22, 2017: Catholic newspaper The Remnant issues an open letter to President Trump pleading that he open an investigation of the “Vatican regime change [from Benedict to Francis] engineered by the Obama Administration.”

There’s no question that, as The Remnant states, Francis embraces “the radical ideological agenda of the international left.”  He is a leader of the Cult of Global Warming, and advocates the open borders agenda of George Soros – even to the point of, on Christmas Eve last Sunday (12/24/17), comparing Joseph and Mary’s trek to Bethlehem with the migrations of millions of Moslems to Europe and Mexican illegals to America.

Then again, it’s been kind of a weird week all around.  For example: 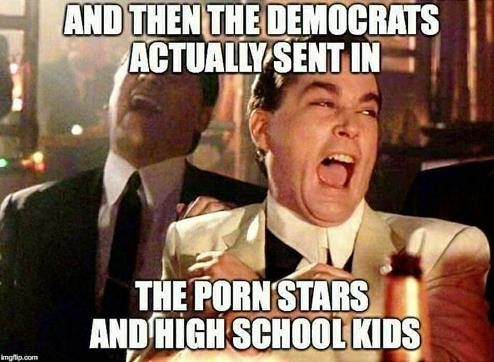 Since the Trump-Russia hoax has crashed and burned in Oakland – there’s no there there – the Lying Swine Fake News Waste Stream Media has sunk into ever deeper depths of self-degradation seeking something with which to smear President Trump.

She was so boring that MSNBC’s chief Trump Hater Joe Scarborough was crushed with disappointment – “The only thing she wants is a big payday,” he concluded.

John Nolte described the event as “The Al Capone’s Vault of Trump Scandals.”  Although when Nolte labeled it “a big fat nothing,” it was unclear whether he was referring to the interview or the interviewee.

Oh, and this just in: Judge Denies Daniels Motion to Depose President Trump (3/30).

Stormy was interviewed by Anderson Cooper.  Here’s how the Waste Stream Media’s other current heartthrob feels about that: 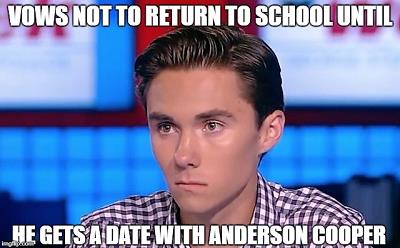 Every guy remembers a David Hogg in his high school – the pencil-neck obnoxious twerp you had to exercise every bit of self-control you had not to beat the crap out of.  You couldn’t because he’s such a weakling little toad it wouldn’t be fair.

Yet it’s a shame that no one gave him a physical lesson in manners, since so often kids like these end up being little Hitlers.  That’s why this short parody of his speech at the so-called “March for Our Lives” last Saturday in Washington DC rings true:

This video parody is driving the Left crazy – because anyone can see this 17 year-old boy is a Fascist just as portrayed – with Hitler’s goal of taking everyone’s guns away so fascisti like him can take control of everyone’s lives.  So he demonizes the NRA instead of the Sherriff and police of Coward County, the cowardly FBI, and his cowardly school for not doing anything about criminally deranged Nikolas Cruz.

That The Little Hogg is such a wimp was shown when he whined about not getting into UCLA (my alma mater) and 3 other UC colleges:  “I’m Changing the World but UC Schools Still Rejected Me.”  Poor widdle Davie, are your feewings hurt – you arrogant narcissist schmuck?

He’s made to order for ridicule – and Fox News’ Laura Ingraham couldn’t resist making fun of him.  The Little Hogg responded by demanding a boycott of her advertisers.

Then Laura did something seriously stupid – yesterday afternoon (3/29), she apologized for “any hurt or upset” her tweet had caused.  Big mistake, Laura.  You never ever apologize to Fascist Swine – you double and triple down on the ridicule instead.

The Little Hogg threw her apology back in her face, saying he wouldn’t accept it until she denounced Fox News.

Instantly, George Soros’ Media Matters organized the boycott, deluging Laura’s advertisers.  Within hours, TripAdvisor and Wayfair folded like cheap suits.  Why in the world can’t the NRA organize a counter-boycott?

Laura needs to fight back like Sean Hannity – as described by WaPo in Why A Laura Ingraham Boycott Will Probably Fail (3/29).

Let’s hope so.  There’s little hope, however, for Stormy and The Little Hogg, as they don’t have the brains to realize they’re nothing more than Useful Idiots being given 15 seconds of fame by the Waste Stream Media, to be quickly cast aside and forgotten once a new fascist cause is found.

Meanwhile, “March for Our Lives” protestors left the streets of Washington and every other city they were at on Sunday strewn with trash.  Evidently, their parents never taught them to pick up after themselves, personal responsibility, or manners.

“‘Roseanne’ Revival’s Huge Debut Stuns Hollywood, Prompts Soul-Searching” (3/28) headlined Deadline Hollywood.  With a sitcom that opens with a family saying grace at dinner and ending with praise of President Trump, no wonder Hollywood Libtards are questioning themselves.

A lot of lightbulbs are switching on their heads – “You mean, the Trump audience is massively real, and I could make a ton of money appealing to them?  Who knew?”

Watch for a revival of All In The Family (but who would play Archie Bunker or Meathead?), and the renewal of Tim Allen’s Last Man Standing.  Taking back the culture one sitcom at a time.

This is, of course, fabulous news.  The ability of the social network monopolies to rig elections and influence votes – by promoting Democrats and liberal causes while shutting out Republicans and conservative causes – is astronomical.  E.g. from the Washington Times:  How the Liberal Leanings of Google, Facebook Shape the Political Landscape.

Silicon Valley libs have every intention of using every bit of their power to rig the November mid-terms giving Dems the House & Senate, with Trump impeachment proceedings to immediately follow.  Thus the irrecoverable lost of trust in these monopolies is providential.

Example: “Ready to freak yourself out?” The Guardian asks this morning (3/30):  Here’s All the Data Facebook and Google Have on You.  It will blow your mind – and cause uncountable millions, especially Millennials, to divorce FB & G.

Yet people are still going to use their smartphones, so something is going to fill the void left by FB.  We need a conservative or at least non-biased alternative to FB fast.  Any ideas out there?

One reason The Donald ploughed through his Pub competitors for the nomination was that so many of them were weird – and no doubt, weirdest of all was Jeb!  Not just Jeb, but Jeb!, like that exclamation point was on his birth certificate.

On Tuesday (3/27), Jeb! gave a speech a Yale University, which the Yale Daily News reported as “Jeb Fires Trump Barbs at Yale Talk.” His meanest barb:  That after losing the South Carolina primary to Trump, he returned home “to children who actually love me.”

Bad move, Jeb!  You should know not to tangle with the Trump Boys.

Son Eric teed it up with:

Lampooning Jeb! with his embarrassment of begging the audience to “Please clap” for him while campaigning in New Hampshire, Eric just cites the hashtag #PleaseClap.

Then son Don Jr. moved in with the kill shot: 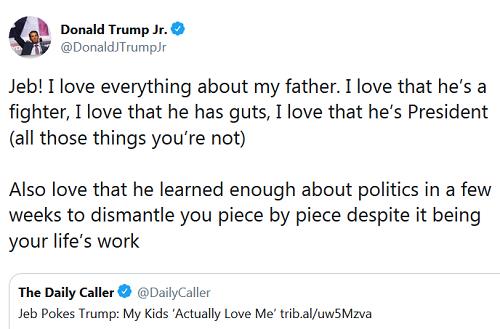 Take Down City.  A thing of beauty.

The number of weird people in Hollywood is beyond counting.  But right up there at The Weirdest is Sean Penn.  Further proof was provided on Wednesday (3/28), when he declared his ideal Dem ticket to defeat Trump in 2020 is Kamala Harris with running mate Jeff Flake.

To which we can only respond, Yes, please!  Please throw Trump into that briar patch!  Do it, Dems!  We double-dog dare you!

We turn now to the most heartwarming – oh, sorry, heartbreaking – trio of news stories of the week:

The WSM portrays all this in the most tear-jerking way possible, breaks your heart to see these families pulled apart.  The patriots of /The Donald at Reddit provide the antidote:

“This should be a PRIORITY – Getting them back to Mexico before they drop a child will ‘Keep their family together’ – It’s the caring thing to do.”

Couple this with AG Sessions yesterday (3/29) naming the special prosecutor he assigned long ago to investigate FBI corruption under Zero.

As “Sundance” at CTH points out, by revealing his name, Federal Prosecutor John Huber, the AG is signaling “the conclusion of investigative evidence collection.”  Part of that evidence is what Fox reported on linked above.  To see how all this is coordinated, here’s the notice DOJ IG Michael Horowitz issued on Wednesday (3/28): 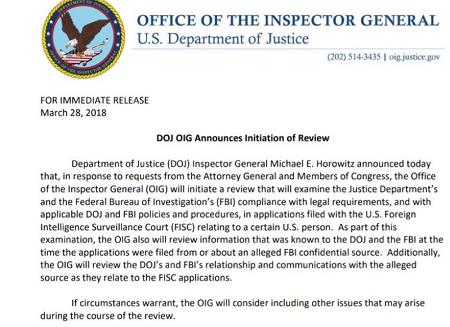 No wonder Andy McCabe is raising money for his legal defense.  If their brains were bigger than their egos, Clapper, Comey, and Brennan would do the same.  The noose is tightening on them all.

No, these are real, not April Fools jokes.  Yet you have to admit, Easter Sunday on April Fools Day is pretty weird too.

Nonetheless, you can see that there is a lot to celebrate this week.  This Sunday is a day of celebration of Christianity’s Resurrection.  As we do, we should take a moment to express our gratitude for the Resurrection of America and thank the man responsible.

Happy Easter to you all.  And be sure and hide the Easter Bunny’s eggs well to make it real fun for the kids and grandkids… 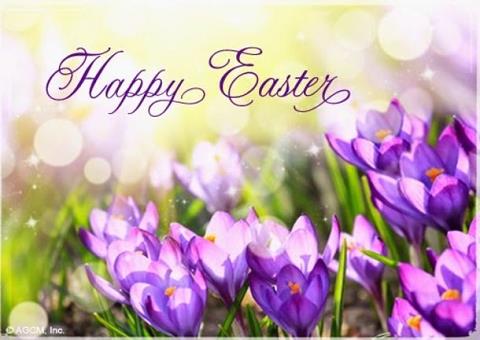