So much for that promise.  As Rep. Louie Gohmert (R-TX) puts it, “This is really tragic… a dark day” for America.  And far more so than Louie would admit.

NR calls it “The Omnibus Disgrace” – all 2,232 pages of $1.3 trillion just for the next six months that Sen. John Kennedy (R-LA) says is “a Great Dane-sized whiz down the leg of every taxpayer.”

In fact, it’s Trump’s Disgrace, for he is the Great Dane.  Rep. Jim Jordan (R-OH) begged Trump to veto the monstrosity passed by the House and Senate yesterday (3/22).  Instead, in a disgusting Anti-MAGA Wimpout, he surrendered to Chuck Schumer this afternoon.

Great headline to wake up to this morning isn’t it?  Nancy Pelosi Gloats over Omnibus: ‘Democrats Won’; No Wall.  She’s gloating over a lot more than No Wall.  The odds just enormously increased for her being Speaker Pelosi again after millions of Pub voters realize there’s just no point in voting Rinos back in office.

For the realization now is that Rinos run the Republican Party, and Chuck Schumer runs the government of the United States, not Donald Trump.

And with that, Trump can kiss his presidency goodbye, doomed to endless dead ends with Dems running Congress after the 2018 mid-term.

What’s pull your hair out frustrating is the solution was so ridiculously simple:  All Trump had to do is veto the Omnibus with this statement:  “I will shut the government down until the Senate filibuster rule is eliminated.”

Until he does that, forcing Senate Pubs to kill the filibuster, Chuck Schumer is in charge, not him.

With Trump’s Omnibus Disgrace now law, spotlights now shine on this glaring fact:  that out of orgiastically spending 1.3 thousand billion, the Rinos could find  33 billion to fund the Wall.  Meaning the Rinos led by Ryan and McConnell have proven beyond any doubt they have no intention whatever of funding it.

We all know there are no spending restraints whatever in the debauch – Planned Parenthood and Sanctuary Cities fully funded, for example.  But as the IBD notes, “The Worst Part of the Omnibus Monstrosity Is What’s Not in It.”  Not a dime for Border Security in general, like more ICE Agents, nor a dime for ObamaCare fixes.

It’s not so much a Blue Wave of libtard enthusiasm that will sweep the Dems back in power on Capitol Hill, but GOP voters staying home and not caring any more.

They won’t care because they realize the GOP Ruling Elite and the majority of Pubs in office are the Deep State just like the Dems.  Trump had a chance to take them to the woodshed today and he didn’t.  The consequences of his cowardice may prove catastrophic.

DC Whispers notes that was the plan all along: Ryan & McConnell Worked Hand-In-Hand With Pelosi & Schumer To Fracture POTUS Trump’s Support With Omnibus Bill.

With malice aforethought, “the Republican and Democrat leadership worked together to force POTUS Trump’s hand and create a voter backlash they hope will fracture Mr. Trump’s base of support among millions of Americans.”

Okay, it’s a long ways between now and November, so let’s hope Trump pulls a rabbit out of his hat in the meantime.  It’ll take that to pump back up the enthusiasm that’s now been deflated.  Just like the Dow, which has lost over 1,400 points in the last 48 hours.

There’s the distinct possibility that the rabbit may be named Michael Horowitz, the DOJ Inspector General whose report on Obama FBI corruption may do to the entire Obama cabal of Comey-Lynch-Brennan-Clapper that it’s already done to Andy McCabe.

In that regard, Trump’s hiring of Joe DiGenova and Victoria Toensing to go after Robert Mueller’s witch hunt yesterday (3/22) is very good news.  Recall that Toensing is FBI informant William Campbell’s lawyer – he’s the guy who has the goods on Hillary’s Uranium One corruption.

And you know how good DiGenova is by the level of antipathy towards him by the New York Times – denouncing him as “the conspiracy theory lawyer who claims Trump was framed by the Obama FBI and Justice Department in the Russia probe.”

What’s most interesting about this – light switch On! interesting – is the reply Goodlatte received from AG Sessions, as reported by Chad Pergram of Fox News: 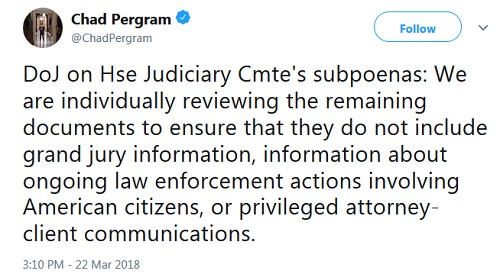 Did you just gasp?  Sessions has revealed that there is already a Grand Jury empanelled with criminal charges lined up and indictments of American citizens – read Comey, Clapper, Brennan, McCabe – to be unsealed once the IG Report is released.

They don’t call him “Stealth Sessions” for nothing.

In an interview on Fox News with Shannon Bream two weeks ago (3/08), Sessions revealed:

So, Sessions has had for some time now his own prosecutor to work with IG Horowitz.  Now we know that based on what they’ve found, DOJ has a Grand Jury already seated and prepared to issue indictments, based on the overwhelming evidence of criminality compiled by the IG.

Over at Conservative Treehouse, “Sundance” cautions against impatience for all this to erupt.  Keep the Big Picture in focus for it is YUGE:

“The biggest political conspiracy in the history of politics.  It is entirely possible officials within the CIA, NSA, DOJ, FBI, State Department, ODNI, and national security apparatus along with the Obama White House, Clinton campaign officials, politicians, career bureaucrats and possibly judges are all entwined and involved.”

And when that happens, the Lying Swine Fake News Waste Stream Media will have a Rage Meltdown like you cannot imagine.  Jack Kelly sure was right on Wednesday that “The Storm Commences.”  Be ready, because the storm is going to be a Cat 5.

Meanwhile, Trump did in fact pull a rabbit out of his national security hat already this week:

Last week’s HFR predicted this, and it’s a bulls-eye ten-strike.  Teamed up with Mike Pompeo at State, we really will have a foreign policy that’s great again – actually no again but better than it’s ever been.

Another vast benefit of John at the NSC helm – he knows exactly how to identify and root out all the Obama holdovers on the NSC, and has the moxie to do it.

A word on McMaster, however – he wasn’t fired as the WSM claims.  As former Green Beret Jack Kelly explained to me, McMaster is a serving Army officer with 3 stars (Lieutenant General) who cannot get his 4th star as full General while on leave at the NSC.  He and Trump agreed for him to go back to the Army so he can get that 4th – what POTUS said in the tweet above was true and heartfelt.

The HFR would like to launch a campaign.  The most widely read conservative news site now is Breitbart.  For some mysterious reason, the editors have developed a truly annoying habit of featuring articles that no conservative or patriot could possibly care about.

So for the next while, there will be a section of the HFR entitled Who Cares, Breitbart?

You are encouraged to copy and send the links to any Breitbart article you feel qualifies to http://www.breitbart.com/send-a-tip/ adding Who Cares, Breitbart? Stop running articles nobody cares about!

Here’s just a few samples from this past week”

David Hogg Gun Control PSA: ‘What If Our Politicians Weren’t the B*tch of the NRA?’

Hillary on Ivanka Being President: ‘We Don’t Want Any More Inexperienced Trumps in the White House’

Who cares? Especially from some Black Racist Moslem named “Bakari.”

Hostin on Melania Trump’s Cyberbullying Initiative: ‘She’s the Wrong Messenger for Everything’

On and on and on, garbage “news” reports that no conservative pro-American patriot could possibly care less about.  Let Breitbart know.

I keep extolling the Forum as one of the great benefits of being a TTPer.  A gin-clear example emerged over the last two weeks in Forum comments on the March 09 HFR – a simply astonishing dialogue between a Zen Buddhist Priest and a Jewish savant, TTPers Yasuhiko Kimura and Joe Katzman, with Gadfly Julius adding his special spice.

You really should study and absorb the whole discussion.  Here are a few appetite-whetting examples:

“Trump being the strategic mastermind, I assume that no one has the whole and complete picture except for him. And that picture continues to expand and to be modified in dance with the unfoldment of real and unpredictable events in the world.

Before an organism or a system collapses it sometimes hypertrophies. Collectivism of all kinds, such as globalism, corporatism, liberal-progressivism, racism, feminist sexism, etc., appears to be hypertrophying, which we can strategically lead to its collapse.

The Law of Substitution states that we need to have a positive substitute to replace collectivism in its all manifestations. The United States fortunately has the Constitution, The Declaration of Independence, the Scottish-American Enlightenment philosophical literature and its intellectual progenies to replace collectivism and restore its original foundation…

“No, they can’t. Islam destroyed the Mutazilites, who might have eventually led to something that could be compatible. I respect Islam, and can see a role for it within G-d’s Providence, but it cannot be compatible with our Common Law Principles. As a more extreme example, Satanism is also a religion. Again, no, these concepts aren’t universal…

(I doubt that) these concept are even cross-cultural, beyond the Anglosphere. The aggregate behavior of people whose cultures did not have this foundation, both inside America and beyond it, shows quite clearly that they’ve never really grokked it.

America was founded as a Christian country that codified the Great Christian Peace (aka. Peace of Westphalia), and the experiment in undoing that shows us that it will not survive without its Christian component. America without Christianity has failed, just as Europe is similarly failing. The West is Christendom.”

And wait ‘till they discuss “The significance of masculinity in spiritual development,” “Sovereignty Vs. Patriarchy,” and “Patriarchy Vs. Matriarchy.”  It will blow you away – sure did me.  Thanks to you both – and to all our other contributors to the TTP Forum!

So we must trust the POTUS to refill the glass.

One last note:  if you’re spontaneous, you can take the one last remaining space on Hidden Holy Land.  To experience the Holy Land like you’ve always dreamed of doing, and with your fellow TTPers, just click Hidden Holy Land and carpe diem!