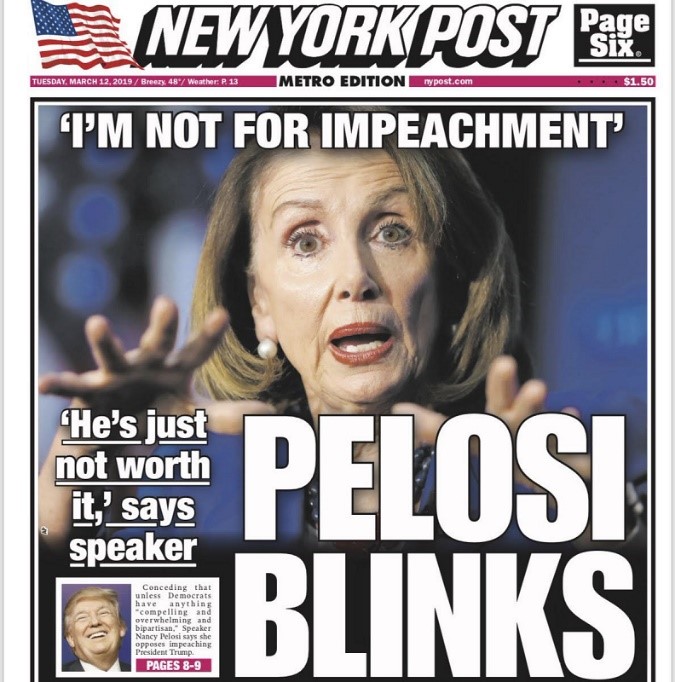 Welcome to the Cornucopia HFR.  Pelosi caving is just the start of it this week.  It’s not just that she blinked – so did Schiff and Nadler.

With the collapse of Bobby Mueller in failing to find any evidence of Trump-Russia “collusion,” the Dem Witch Hunt that Schifty and Fatso were planning to perpetuate with endless subpoenas and investigations has collapsed also.  As CTH explains in Failure to Launch (3/11), they’ve surrendered.

Or as Mike Ramirez describes it: 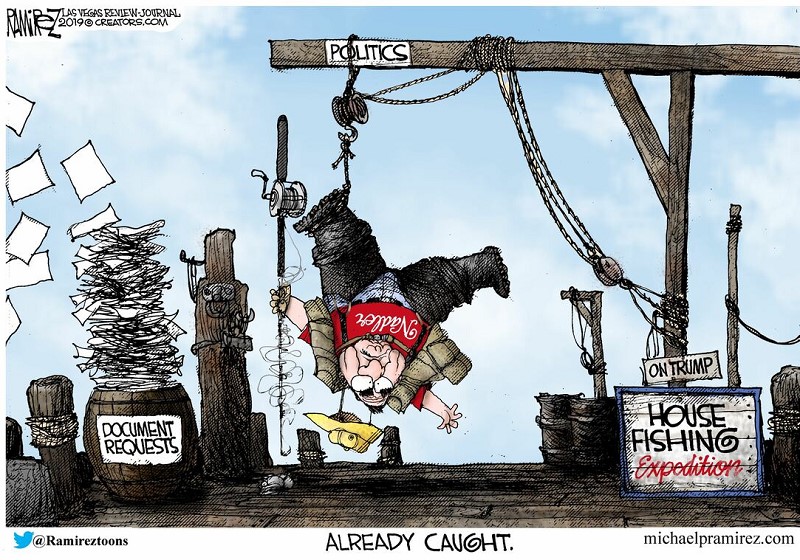 Which brings us to this guy.  Recognize him?  Hint: he’s the HFR Hero of the Week. 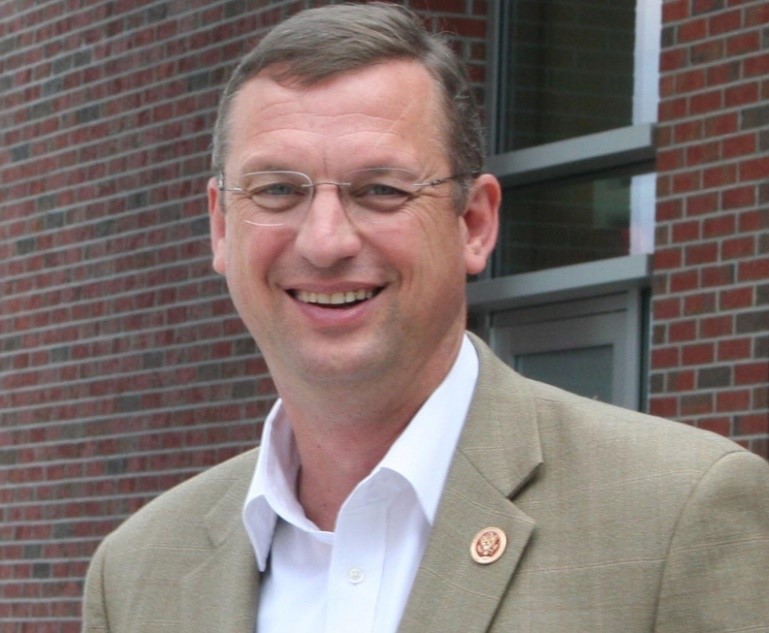 As it has been to everyone, so it was to him unfathomable that the Trump Justice Department continues to do nothing to expose the real collusion of Democrats with the Obama FBI and DOJ in a plot against Trump’s candidacy and presidency.  We’re all sick and tired of it, but this guy actually did something about it.

Last Friday (3/08), he took it upon himself to unilaterally release to the public the full unredacted transcript of DOJ collusionist Bruce Ohr’s deposition to Congress last August.

On Tuesday (3/12), he forced the release to the public the full unredacted transcript of Lisa Page, FBI collusionist and lover of Peter Strzok, closed-door testimony to Congress.

And yesterday (3/14), he released to the public the full unredacted transcript of major FBI collusionist Peter Strzok.

Who is he?  His lapel pin might give it away.  He’s Congressman Doug Collins (R-GA), House Judiciary Ranking Member.  You can imagine how this torqued Judiciary Chairman Nadler’s shorts, but Collins couldn’t care less.  This good ol’ Georgia boy has got moxie.

Here’s just one revelation that other Members are now free to make public: 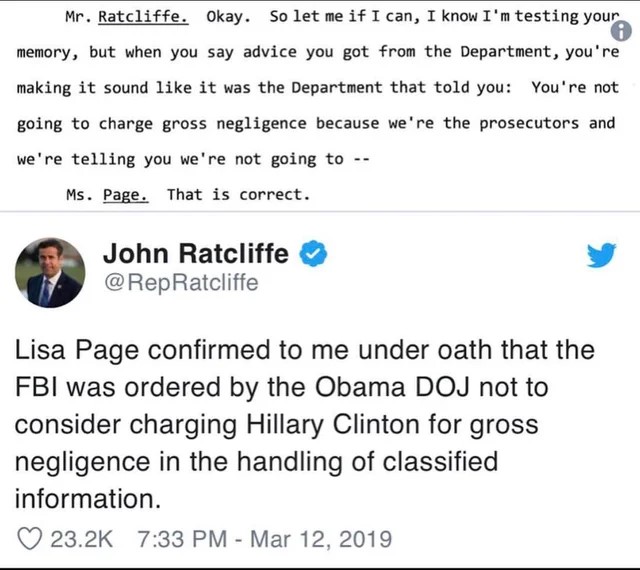 My friend Quinn Hillyer in the Washington Examiner ereyesterday (3/13) explains that not just Lynch is open to prosecution, but that, Lisa Page Testimony Means DOJ Might Want to Re-Open Case Against Hillary Clinton.

Let’s put new AG Bill Barr in the crosshairs to actually do so.

POTUS responded this morning (3/15) to what Doug Collins hath wrought (read up from bottom): 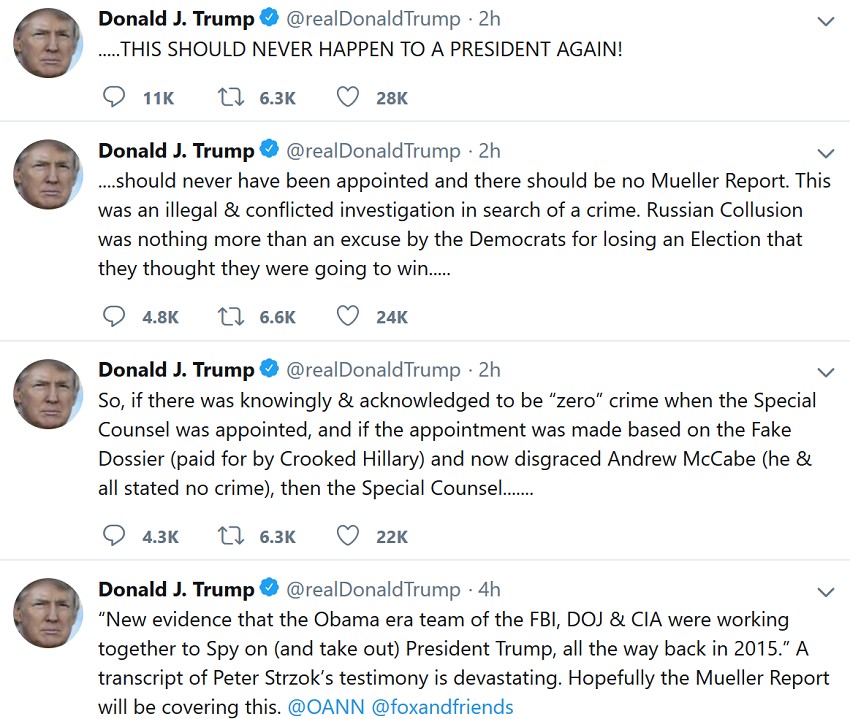 But wait!  There’s more!  I told you we’re in Cornucopia City this week.  Late yesterday (3/14), The Hill’s ace John Solomon reported: The Damning Proof of Innocence That FBI Likely Withheld in Russia Probe.  Another must-read of the week.

Only prosecutions and cleaning out the filthy Augean Stables the FBI has become can rescue the FBI/DOJ now.  We’re waiting for the perp walks, AG Barr.

For all that Congressman Doug Collins has done for his country in the last few days, no doubt he’s our Hero of the Week. 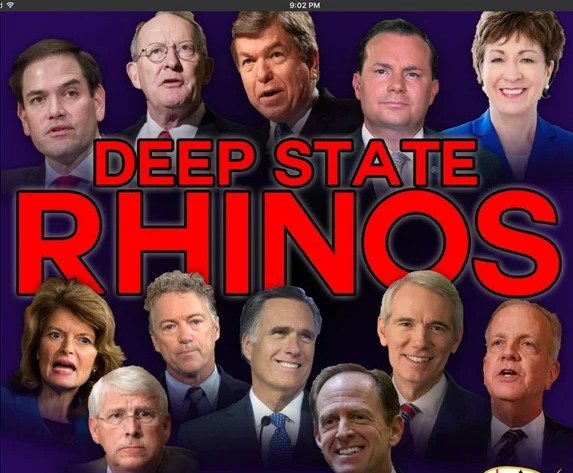 Everyone is excoriating these 12 swineherds, including POTUS:

But actually, it’s worse than that.  With a surprise for them at the end.

Yesterday (3/14), CTH unveiled its Deception Caucus theory chaired by McConnell.  It surmises that the Dirty Dozen are only a part of it, employed by their leader to get close (59-41) to an impeachment majority of 67 to give PDJT a warning shot across his bow.

And its true, the Open Borders-Cheap Labor traitors of the US Chamber of Commerce and the Business Roundtable spent almost $118 million in lobbying Congress last year.  So many Uniparty Senators are bought and paid for because:

“Open-ended immigration is the holy grail for the multinationals.  Their K-Street community will not allow border security without putting up a very serious fight.  There are trillions at stake.”

Yet POTUS quickly Vetoed the bill as soon as it reached his desk this afternoon, which calls McConnell’s bluff.  But is it a bluff?  Would The Turtle signal to Pelosi that it’s Impeachment Game On, that if she gets a simple majority vote (that’s all it takes in the House) to vote for impeachment, that he can guarantee enough RINO votes to reach 67 and convict?

Let’s leave that question for a look at a curious story driving the Libtard Media apoplectic.  “Trump Issues Ominous Warning” blared the Daily Mail today (3/15), as did CNN, “Trump Suggests that Supporters May Get ‘Tough’ with Democrats,” while New York Magazine headlined, “Trump Threatens Violence if Democrats Don’t Support Him.”

What set their undies on fire?  This quote from a Breitbart interview published yesterday (3/14):

“You know, the left plays a tougher game, it’s very funny. I actually think that the people on the right are tougher, but they don’t play it tougher. Okay? I can tell you I have the support of the police, the support of the military, the support of the Bikers for Trump – I have the tough people, but they don’t play it tough — until they go to a certain point, and then it would be very bad, very bad. But the left plays it cuter and tougher. Like with all the nonsense that they do in Congress … with all this invest[igations]—that’s all they want to do is – you know, they do things that are nasty. Republicans never played this.”

The first thing to notice is the context – POTUS is condemning Paul Ryan and RINOs, not Dems.

Yet paranoid narcissist Dems think it’s always about them – like the cartoon of a guy in a movie audience when everyone is laughing at a funny scene and he’s thinking, “I know they’ll say they’re laughing at the movie, but I know they’re really laughing at me.”

Since Dems are unable to comprehend Trump is a strategic genius, and they can’t put 2+2 together, let’s do it for them:  The threat to play it tough is directed at McConnell and the RINOs in the Chamber of Commerce’s pocket.

POTUS’ unmistakable message for McConnell is: “Don’t even think of what will happen to GOP Senators who succeed in impeachment-convicting me.  The riots on Capitol Hill will ensure they’ll never leave the Capitol Building in one piece.  Even the hint they might do it will ensure this.  Back down, Mitch, now.”

Why would POTUS issue a threat of violence to Dems just as the whole Witch Hunt is over, Mueller’s, Shiffty & Fatso’s?  No, he just returned McConnell’s bowshot with a much bigger cannonball.

You heard this here first, folks.  Watch what happens from now on.  Odds are Mitch will be The Donald’s lapdog.

Here’s something worth watching – 12 minutes of POTUS answering journo questions after meeting the Prime Minister of Ireland yesterday (3/14).  He’s calm, at ease, in command of each issue, answers clearly and intelligently – in short impressively presidential.  No Dem can hope to compete with this.

Near the end, comes his instantly famous “crazy hands” comment which we’ll discuss after you peruse:

Bobby “Crazy Hands” O’Rourke doesn’t stand a chance.  Watch his announcing his candidacy with the sound off (what he says is such drivel it’ll hurt your ears anyway).  Note his wordless frozen-smile wife Amy has a death grip on his left arm trying to hold it down.

Beto El Pendejo is such a pathetic joke you’re not sure where to begin.  We could go with Piers Morgan at the Daily Mail who is seriously ticked off:  Beto O’Rourke is a deluded loser running on a ticket of lies, hypocrisy and the vote-destroying message that all Americans are about to die (3/14).

Or we could go funny with Jim Treacher at PJMedia, who thinks he’s got just why Dems are hot for Beto.

“(He’s a guy who) looks and sounds like an actor playing a vigorous, youthful presidential candidate on a CW espionage show filmed in Canada for tax reasons. Beto gets away with drunken car accidents like a Kennedy, he appropriates other cultures like Elizabeth Warren, and he marries into wealth like John Kerry. He’s the total package!” 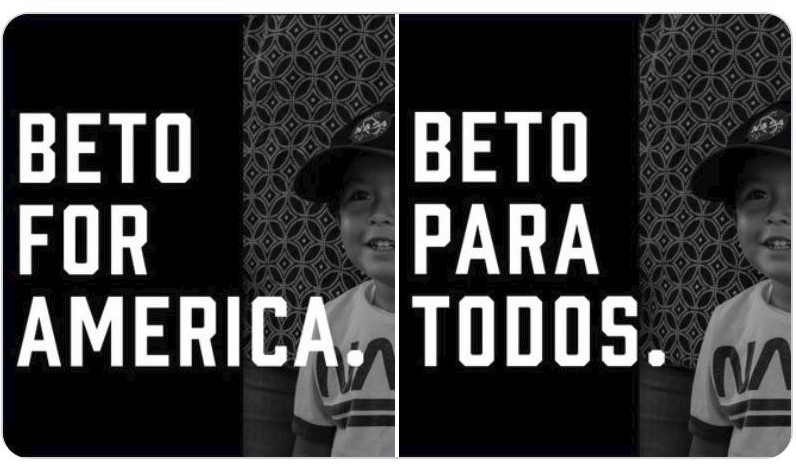 This 47 year-old man-child has such a ridiculous record of non-accomplishment – see his Wikipedia bio – it’s no wonder that Nancy Pelosi can’t think of a single specific thing he’s ever done.

I can’t either, except that he did marry money – his wife is the daughter of El Paso real estate tycoon William Sanders, worth $500 million.

It’s so easy to make fun of him even the Left is doing it, ridiculing his messiah-esque “I was born for this” puffery.  And yes, he’s dumb as a tree stump, comparing – be ready for it – the bravery of those writing climate change laws to that of the soldiers who stormed the beaches of Normandy.

Yes, he stupid enough to run for president advocating Occasional Cortex’s fascist Green New Deal – “We only have 12 years left!!!”

What he’s really saying, what all the Fascicrats running for president (Warren, Harris, Sanders, Booker, etc., etc.) is:  All we’ve got left to run on is the Global Warming Scam.  That’s it.  Take that away, and they’ve got nothing to else to say.

The miniscule amount of CO2 we sinful humans pump into the air is going to burn up the planet – that’s not science, that’s just the Left’s rationale to rule and destroy everyone’s life.  (FYI – all told, all 7.5 billion of us, produce one tenth of one percent of the greenhouse gases in the atmosphere.)

As a real climate scientist, Vijay Jayaraj explains in AT yesterday (3/14): The Real Climate Threat Is Global Cooling.  Should be required reading for every voter and every student in the country, and every single person inside the Beltway.

Speaking of real threats and all the Dems have left… 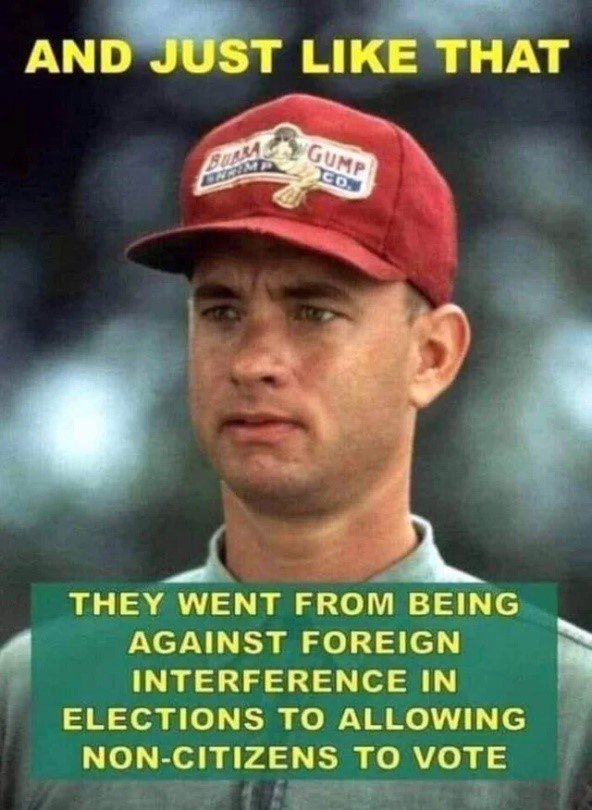 Last week saw many TTPers really unhappy over my Why Trump Will Lose in 2020 (3/07). Yet evidence accumulates by the day how Pelosicrats intend to commit massive vote fraud in 2020 – read Kris Kobach’s Dems Pass Law to Encourage Voter Fraud (3/10) as an example.

This is the awful truth whether it hurts or not:  Not only will President Trump lose in 2020, but the Dems will sweep the Senate, the House, and many state governments as well – if they are allowed to mobilize the 20 to 30 million illegal aliens already inside our borders to illegally vote.

We discussed how POTUS can prevent that and implement Real Voter ID in last week’s HFR (3/08).  The good news this week is the flip side of it becoming obvious now of Dem voter fraud intentions – that vote fraud is all the Dems have, they’re betting the farm on it because they have nothing else.

As Dan Bongino puts it (note the POTUS retweet): 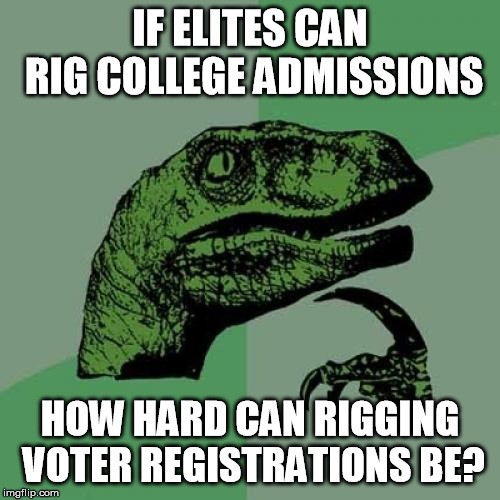 Not hard at all if you control a state’s government like California.  Very hard if Real Voter ID requiring voting in person with photo and proof of citizenship imposed on all federal elections in every state.  With the former, Trump loses.  With the latter, i.e., an honest fair election, Trump wins in a massive landslide.

We can never forget that the Democrat Party has tragically gone Full Fascist.  Their only morality is any means justify the achievement of their goal to possess absolute power over our lives.

To drive this home, I’d like to suggest you watch this, The Brains Behind AOC.

I knew about the “Justice Democrats” and Saikat Chakrabarti being Occasional Cortex’s creators and puppet masters, but not about Cenk Uyghur being behind them, and especially not Chakrabarti’s hero being this guy:  Subhas Chandra Bose.

Read his Wikipedia bio, he was horrifically evil.  Also consider that Cenk Uyghur’s show calls itself The Young Turks – the monsters who seized the Turkish government and committed the Armenian Genocide in WWI.

This explains a lot of what I’ve been saying that the Dems are going Nazi with Whites as the New Jews.  They really want a White Holocaust as this will destroy America and Western Civilization.  I don’t know who the guy who calls himself “Mr. Reagan” is, but he’s performed a significant public service.

On the other hand, watch for Establishment Dems to ruin Justice Dems — the leak of Chakrabarti’s finance illegalities came from them.  The two groups will tear the Dem Party apart.  PDJT will follow Napoleon’s advice to never interfere while your enemy is destroying himself. 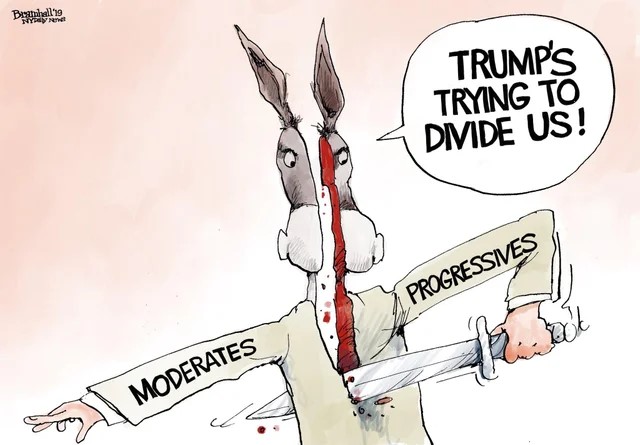 Okay, that’s a wrap.  See what I mean by a cornucopia?  There’s more but it’s dinnertime.  Have a terrifically happy St. Patrick’s Day this Sunday.  Remember – Guinness is good for you!

Meantime, you need to click here to be a Wheeler Expeditions member to learn how to fill your life with adventure.