For two days in a row this week (3/02-03), TTP’s favorite Congresslady Marjorie Taylor-Greene (R-GA) spoke on the floor of the House wearing a “THIS MASK IS AS USELESS AS JOE BIDEN” face mask, denouncing Dem behavior and bills, then twice forced immediate adjournment “so that Democrats have time to reflect on their actions.”

The Dems have dumb as a stump AOC, while we have sharp as a whip MTG.  That mask message is a brilliant two-fer – the senselessness of mask mandates and China Joe’s mental deterioration.

Brilliant timing as well.  On Tuesday (3/02), Texas Gov. Greg Abbott rescinded all lockdowns with “all businesses of any type open 100%,” and further stated, “I am ending the statewide mask mandate.”  Here’s his statement and wise advice:

Governors of Alabama, Mississippi, Montana, Iowa, and North Dakota made similar announcements (albeit Alabama is delayed until mid-April). They joined 11 other states that have never had them: Alaska, Arizona, Florida, Georgia, Idaho, Missouri, Nebraska, Oklahoma, South Carolina, South Dakota, and Tennessee.  Here’s a map: 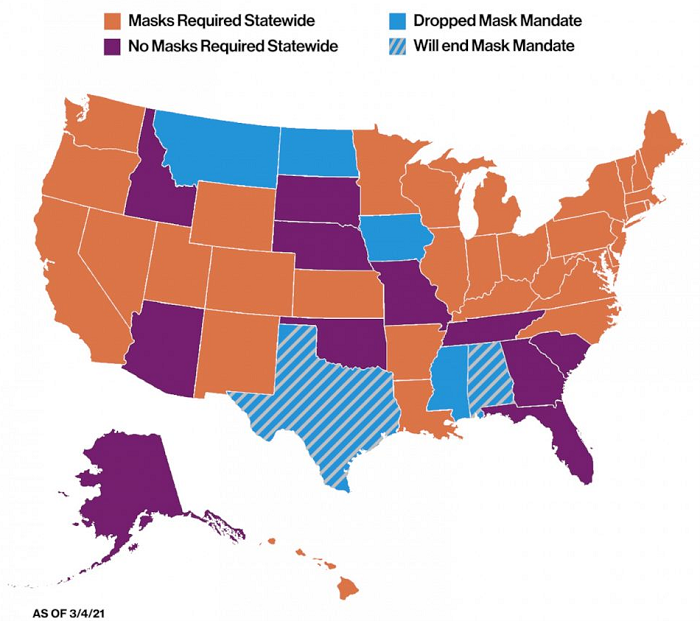 The next day (3/3), FPX took it upon himself to denounce Gov. Abbott and his 14 other no-mask-mandate gubernatorial colleagues as “Neanderthals.”

His timing was as stupid as MTG’s was smart.  Instantly, Neanderthals are the new Deplorables.

“If making data-driven decisions to reopen, loving freedom, and trying to get back to normal is what a Neanderthal would do, then well, I guess you can count me as one. https://t.co/TYmjMuoR8Y

While Abbott wasted no time in asking in effect, “Who’s the Neanderthal?”  When asked on Fox yesterday (3/04) how he responded to “being called a Neanderthal” by FPX, he answered:

“First, obviously it is not the type of thing that a president should be saying, but second, he kind of said it on the worst day he could have. Because the same day he said that, in Texas, the Biden administration was releasing illegal immigrants into our communities who had COVID.

Thus, because of his idiotic insult, combined with his Hate America obsession of wanting illegals to flood en masse across our border, he’s become America’s #1 Covid Super-Spreader: Super-Spreader Joe Biden Is Releasing COVID Positive Migrants into US Interior.

So much so that as of today (3/05): Greyhound CEO tells Biden’s DHS chief that migrants must be COVID-free before boarding buses.

Yep, we have the first Neanderthal President in history.

So thanks, MTG, for pointing out masks are as useless as FPX.  Here’s Dr. Scott Atlas, Professor Emeritus at the Stanford University Medical Center explaining the pseudoscience madness of mask mandates:

And FPX madness is going to quickly get massively worse.  This is the lead headline on Fox at 10:40am this morning (3/05): 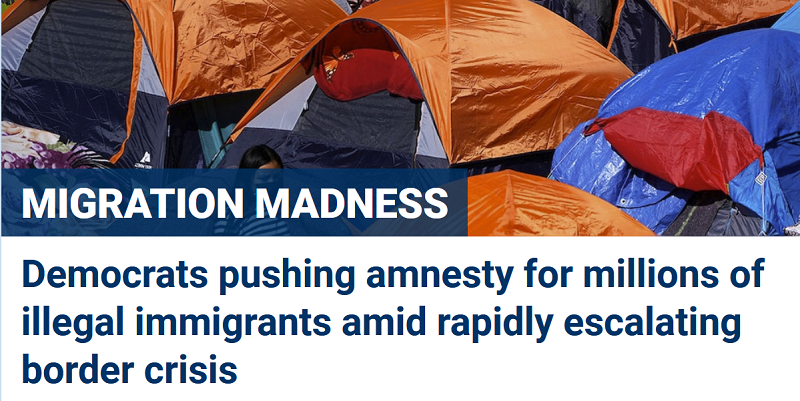 And not just amnesty but citizenship:

“House Democrats are pushing two bills that would grant legal status and citizenship to millions of illegal immigrants in the coming weeks — even as the Biden administration scrambles to deal with a rapidly escalating crisis at the southern border.”

The Dems are frantic to ram their Destroy America agenda down our throats right now because they know they haven’t much time.  That means a few scant months, not until the ’22 elections.  They know the walls are rapidly closing in on them for three basic reasons.

First – they know that we know, along with the rest of the world, they got control of the White House (and the Senate via Georgia) by industrial-scale vote fraud, that POTUS was the legitimate run-away victor on Nov 3.

That’s why the entire Deep State – from the now-irreparably corrupt FBI to Big Tech to Big Media – will not allow anyone to question the Nov 3 fraud.

The latest egregious example is POTUS denouncing the fraud at CPAC with a viewership of 31 million on RSBN – with the result: YouTube Removes Videos of Trump’s CPAC Speech, Suspends RSBN. The excuse: “This video has been removed for violating YouTube’s Community Guidelines.”

To the President of the United States!  Now that is Fear of the Truth on steroids.

Remember that old TV game show “Truth of Consequences”?  It was so popular back in the 50s that a town in New Mexico renamed itself after the show.  In any regard, the Dems and Deep Staters are terrified of the consequences of their cheating – so they have to keep discussion of it forbidden, with anyone mentioning it canceled as a racist white supremacist domestic terrorist.

Second – FPX is deteriorating fast.  Fast means fast – how long he can continue to be propped up by his handler Jill and cover-upped by TV news is a matter at most of 2 to 3 more months, even odds it’s less.

He’s Basement Joe again.  He hasn’t the energy nor coherence to give a State of the Union, or even to hold a solo press conference.

Ereyesterday (3/03), after teleprompter-reading a virtual talk to the House Democrats, the White House cut the video feed when he asked for questions. His answers were too embarrassingly unintelligible.

And then there’s his genius move to approve charging White House reporters $170 for a Covid Test each time they participate in a White House briefing by Circle Back Psaki.

The clock is ticking on when the Dems will pull the 25th Amendment trigger on Dementia Joe.  And once that happens, the Dem Destroy America Juggernaut, via Executive Orders or legislation, is dead in the water.

It’s going to take a while to install Heels Up in the Oval Office, then to gain majority approval by both House & Senate for her VP replacement, then to even begin to reignite the momentum for destructive change they have for the current fleeting moment.

That moment by then will be long gone, because by that time:

Third — $100 oil. WTI is at $66 today (3/05).  Gas is already near $4 a gallon in California.  Prices at the pump are going to skyrocket with FPX’s war on fracking, and both Saudis & Russkies taking advantage by massive cutbacks to jack up crude.

Recall the prophetic words of POTUS at CPAC:

“You wait till you see what happens with your gasoline!  One of my proudest accomplishments as president was to make America energy independent, the United States became the number one energy superpower on Earth. Number one.  Became number one. Bigger than Saudi Arabia, bigger than Russia by a lot. We left them all in the dust. They were all in the dust.

But if the Democrats have their way, we are heading from energy dominance to energy disaster. That’s what’s happening. You have to see what’s going on. Everything’s being closed up. It’s a disaster.

Under the radical Democrat policies… energy prices are going to go through the roof. And that includes your electric bills. That includes any bill having to do with energy, our biggest cost.

We will now be relying on Russia and the middle East for oil. And they talk about Russia, Russia, Russia. What’s better than what this guy has done for Russia?

You’re going to see costs go like you have never seen them go before. It’s a very sad and very stupid thing that they’re doing. The Biden policies are a massive win for other oil producing countries and a massive loss for the United States and our great citizens.”

No way Heels Up will be able to right this pitchpoled administration and get it sailing again – Marxist that she is, and terminally unlikeable to boot, she’ll sink it even deeper underwater.

Add to this the relentlessly unhinged war the Dems and the Woke Left continue to wage upon the icons of normal American culture.  This Tuesday (3/02), it may have reached Peak Cancel Culture by banning Dr. Seuss books for having  imaginary white supremacy racist imagery.

The President of Seuss Enterprises, publisher of all Seuss books, Susan Brandt, is responsible for this woke lunacy. Needless to say, the six books she banned are soaring in sales.  Watch for smart entrepreneurs to make a deal with printers in China to make bootleg copies of all six by the semi-trailer load where they’ll be for sale all over the Internet.

The theme of the CPAC conference in Orlando last week was “America Uncanceled.”  The attempt to cancel Dr. Seuss may be the last straw for any more tolerance of Lunatic Leftie Wokism.

On Monday (3/02), we saw a last-straw indication in academia with this Daily Mail report: Michigan professor says he’s been ‘systematically discriminated against for 40 years for being a white man’ as he demands apology from university over its new anti-racism policies.

Jeffrey Burl is a professor of real world science, electrical & computer engineering, and he’s had enough. His university, Michigan Tech, passed a ridiculous anti-white supremacy resolution, and he has the guts to stand up and condemn it.

“Women and people of color should be encouraged and given fair access and opportunity.  But, once someone goes to college… white males are systematically discriminated against both at Michigan Tech and in the nation at large.”

He is demanding an apology from the university for what he condemns as a racist resolution.  You can email him your thanks and support here: [email protected].

We close with the HFR Hero of the Week.

Yesterday, he released this: 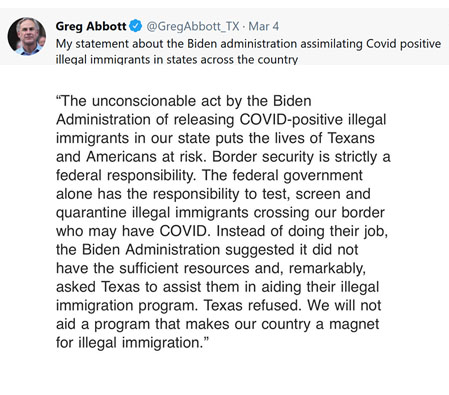 “The First Amendment is under assault by these social media companies such as Twitter and Facebook, and that is not going to be tolerated in Texas.  These sites have evolved into the modern-day public square. These are the areas that used to be the courthouse square where people would come and talk.