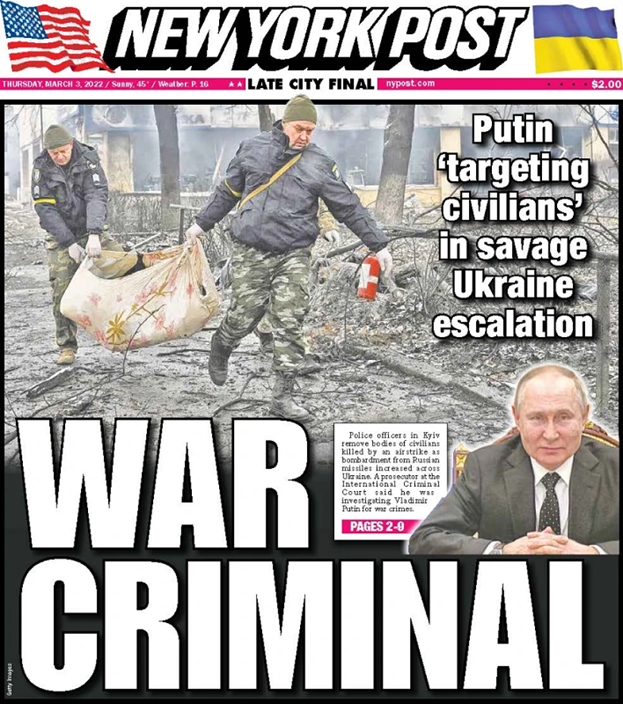 Well, of course he is.  He’s the world’s pariah, the most despised human on Earth now – especially with his troops bombing then seizing Europe’s largest nuclear power plant last night (3/03).  Senator Lindsey Graham tweeted the hopes of countless millions all over the world:

“Word has come tumbling out that Russian Vladimir Putin is descending into madness. Is it too much to ask true Russian patriots to rid the world of this tyrant before he does further damage?”

Indeed, he looks so bad these days the Daily Mail is calling him Flabby-mir Putin: Russia’s President Vladimir looks bloated and ashen in meeting as pressure of his Ukrainian invasion takes its toll on his appearance 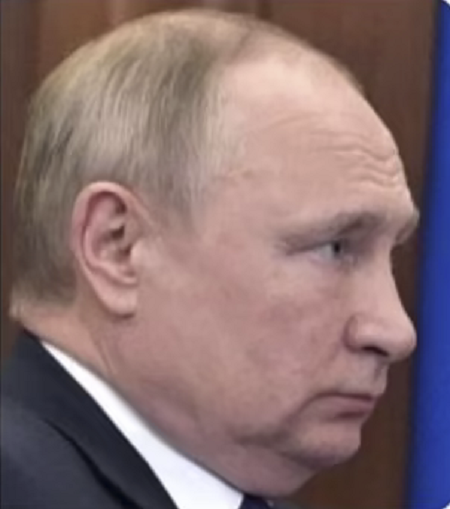 Now before we go any further, take a moment for a quick read on why Ukraine Has Won and Putin Has Lost by British military expert Glen Grant on TTP earlier today.

Okay, with all that understood, let’s talk about the opportunities amidst the dangers of Putin’s war, and the damage this war is going to do to the Democrat Party.

As a Special Session, 181 countries’ ambassadors attended of a total state membership of 193 with 12 unable to attend.  The vote to Condemn was 141 to 5 with 35 abstentions.  Only 4 – 4! – countries voted No with Russia: Belarus (now a full colony of Russia), North Korea, Syria, and Eritrea.

Yes, even China abstained, as did Cuba, Nicaragua, Bolivia and other Russian allies.  Here’s the map:

The entire Western world and immensely more – even Burma and Taliban-run Afghanistan – wants nothing to do with Putin’s Russia. This is a massive world-wide moral rejection of Putin – and a very practical rejection.  All those green countries (and a lot of neutrals as well) have watched small Ukraine kick the mighty Russian military’s ass – it’s just been no contest straight up.

They all know that even before the war, Russia’s GDP was only 75% of the GDP of just Texas alone ($1.5T vs $2T), that the ruble is now 80% of one US penny and falling like a stone, that 70% of Russian oil exports are frozen, and bankers like JP Morgan are predicting a 35% crash in the Russian economy – and that’s very optimistic.

Oh, and that $630 billion in foreign reserves Putin has?  He can kiss much of it goodbye.

Down the tubes.  Da svidanya, Russia.  For there’s more.  Renowned oil & gas strategist Gregory Bartholomew’s analysis shows that Russian oil production has peaked and may be in irreversible decline.   That’s for gas, too, as he says: “Despite having large gas resources in the Arctic, all of the easy gas is gone and maintaining production at current levels could be very difficult and expensive.”

Especially when all the majors – BP, Shell, Mobil, Exxon et al – have pulled out of Russia, and without their technology, Russia doesn’t have a prayer of competitive extraction in the future.  No wonder by yesterday (3/03), the major Russian oil/gascos – Lukoil, Gazprom, Rosneft, Surgutneftegas – have lost 95% of their total market cap on the London exchange.

What about Germany? It’s decided to kick its addiction to Russian gas.  Meaning while looking for new sources, say Israel’s in the eastern Med, it will be reopening its mothballed nuclear power plants and may even be building new coal plants.  They don’t care about Greta Thunberg anymore.

So – cui bono?  Putin’s Russia is in Loser City, but who benefits?  Well, Europe for one, big time.  Putin has unified all of Europe like perhaps never before.  Who knows how long it will last, but for the meantime, Ukraine will be welcomed into the EU and NATO.

Already, Finland and Sweden may soon be joining NATO.  Having lost its fear of Russia, Europe is getting its huevos back.  The irony may be that NATO expands to all of Europe right up to Russia’s entire border from the Barents Sea to the Black Sea – then Russia gets a new semblance-of-real-democracy government and ceases to be an enemy.  What will be NATO’s purpose for existence then?

In any regard, enjoy the moment.  A wave of optimism and new-found energy seems on the horizon for all of Europe.

The other big – yuge – beneficiary of Russia’s collapse is of course Chicom China.  They need Russia’s oil badly and now will be getting it first at bargain basement prices, and soon be in control of a great deal of it.  After control comes seizure.  Not right away – but you know how I’ve been talking about the possibility of Chinese Siberia for years.  The Chicoms will be moving their timetable for it forward now.

However, they may well hold off from attempting a takeover of Taiwan.  The world revulsion of Putin’s War has given them a taste of what that same revulsion directed at them would be.

True, Marco Rubio’s warning yesterday (3/03) that “China is Russia times 1,000” is accurate.  Still, odds are they will be patient and cautious regarding Taiwan, deciding now is not the moment.  But… if Xi gets as hubristic as Putin, all bets are off.

So those are the winners.  Is there another big time loser besides Putin’s Russia?  Sure is… the Democrat Party.  For openers: 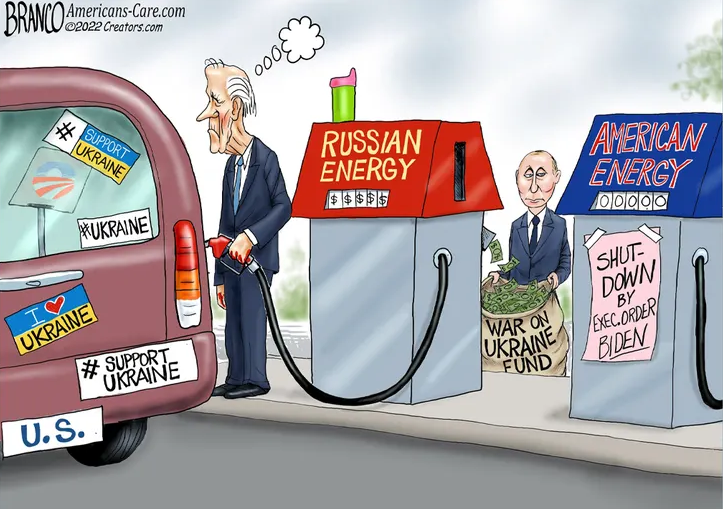 “The United States continues to allow the import of more than half a million barrels per day of crude oil and other petroleum products from Russia during this time of war. This makes no sense at all and represents a clear and present danger to our nation’s energy security.

The United States can and must ramp up domestic energy production and increase access to our abundant resources and technologies to both protect our energy independence and support our allies around the globe.”

Manchin was so mad he sat with the Republicans during Xiden’s SOTU that night.

Pelosi got the message so the next morning’s headline was: Pelosi Favors Banning All Russian Oil Imports Into The United States.  Or she pretended to.

Because on the day before (3/01), she made sure every single Democrat voted to block the Republican bill to open up the Keystone XL Pipeline. One Pub voted with the Dems – Matt Gaetz who had taken a mega-dose of Stupid Pills spouting some nonsense why he voted Dem.

Yet there’s no Pelosi hypocrisy, for the goal here is to blame Putin’s war on skyrocketing gas at the pump prices.  That’s the Dem distraction from Bidenflation while continuing with their Climate Change Religion.

The Oval Office Squatters made that very clear on Monday (2/28): White House Dismisses Cries To Increase US Oil Amid War, Psaki Says We “Must Prioritize Clean Energy”

There’s a must-read about this by Francis Menton at the Manhattan Institute: No Energy Realism in Biden Land.  He quotes numerous Xiden officials infected with climate looniness, noting:

“In 2021, after finally achieving energy independence under President Trump, the U.S. immediately gave that up as the Biden Administration brought fresh rounds of fossil fuel suppression.

There are plenty of people in positions of power and/or influence in and over our government who are so taken with the religious fervor of ‘green’ energy and ‘net zero’ emissions that no amount of critical real world events can penetrate their mental armor.”

That’s because what distinguishes those of the Left from those of the Right is the fundamental goal of the former is power over people, control of their lives, while that of the latter is prosperity of people, being free to flourish following one’s personal dreams.

Thus, “global warming” or “climate change” is no more a scientific theory than the “scientific socialism” of Marxism-Leninism, but merely a political rationale for fascist control of people.  The irony of what is happening now is:

Menton directs our attention to this in Bloomberg on Monday (2/28): “Germany May Extend Coal Use To Replace Russian Gas,” and this excerpt:

“Economy Minister Robert Habeck, the former co-leader of the Green party, said coal plants could run for longer and even said he wasn’t ‘ideologically opposed’ to extending the use of nuclear energy. Chancellor Olaf Scholz announced on Sunday plans to build two new liquefied natural gas terminals to expand Germany’s energy choices and reduce its reliance on Russia.”

After quoting various White House climate fascisti bewailing such “delayism,” Menton concludes, what Germany is doing with others to follow isn’t delaying the end of fossil fuel economies, it’s the end of whole climate change agenda.

If only it can adapt the wisdom of Joe Manchin – “The United States can and must ramp up domestic energy production and increase access to our abundant resources and technologies to both protect our energy independence” – and campaign this fall and on to ’24 on restoring what Trump achieved to increase fossil fuel production, not only will the GOP will regain House and Senate majorities, it will throw the Climate Change Fascist Hoax in history’s dustbin.

The state of play at the end of this week is thus a remarkable two-fer.

*The collapse of Putin’s Russia.  The end of Russia as any sort of important power in the world.  The reinvigoration of Europe with all of Europe whole.

*The collapse of the Biden Regime – epitomized by Zhou’s ridiculous SOTU disaster – and of the Democrat Party’s principal rationale, the hoax of Climate Change.

Springtime in America – and the World – is on the way.

Let’s close with this ode to the HFR Hero of the Week:

How Volodymyr Zelensky Defended Ukraine and United the World