We have here what is known as an adianoeta: an expression with one obvious meaning and another hidden meaning.

In this scene from Casablanca, when French Capt. Renault (Claude Raines) introduces Rick (Bogart) to Major Strasser of the Nazi Gestapo, he says, “Major Strasser is one of the officers who has earned the Third Reich the reputation it has today.”

This week, TTP dispensed with any double meaning to describe what the most renowned law enforcement agency in America has tragically become: Can We Reform a FBI That Behaves Like A Gestapo?

“The FBI leadership is doing everything in their power to paint honest, law-abiding Trump supporters as nascent ‘white supremacist’ terrorists,” the article reports, while the frontline agents “are coming up with nothing from the Trump folks — no evidence of planning, coordinating or executing violence.”

Further, what “agents are finding is that Antifa people–more than several dozen–were paid to go to Washington, DC and incite violence” – and that evidence is not being pursued but is being suppressed by Director Wray and his leadership.

A good friend of mine since the 80s, TTPer Steve Baldwin, just gave me a personal example.  Last December he wrote an article in The American Spectator: In Defense of Community Defense Groups.  He told of the effort of local citizens in eastern San Diego County in California to protect itself from a repeat of the BLM/Antifa riot violence that looted and burned 17 buildings in downtown La Mesa on May 31.

Steve’s warning of two months ago is prophetic:

“The group is justly worried about a potential Biden presidency, which will likely order the FBI and the Justice Department to investigate community defense groups all over America under the phony claim that they are ‘hate’ groups.”

And sure enough, that is exactly what is happening right now, agents with FBI badges showing up at homes of group members demanding to know who among them might be a “white supremacist,” a possible “domestic terrorist.”

Where you live could be next.  Note the warning by TTPer Mark Deuce on the Forum:

“Bear in mind, they may not tell you who they are when they try to talk to you.  I would apply ‘need to know, right to know’ across the board on anything and everything in your personal and work life now.   I just deleted my Facebook account and Twitter.  It is time to go dark!”

Speaking of prophetic warnings.  You might recall my warning back in June 2017 about Nazi Democrats for whom “Whites are the New Jews”: The Nazi Left and the Source of Trump Hatred.

Forward to three days ago (2/23), when this story headlined in the Daily Mail: Buffalo public schools claim ‘all white people’ perpetuate systemic racism and force kindergarteners to watch video of dead black children to warn them about ‘racist police and state-sanctioned violence’

The only question we should be asking is: Why isn’t Erie County District Attorney John Flynn prosecuting the responsible school official Fatima Morrell for criminal child abuse?  His office number is: (716) 858-2424.

The point here is: we need to go on the offensive; no complaining but taking offensive action. This hate-filled racist woman belongs in jail.  We should say so and demand it.  This sort of garbage is happening, or will soon, all over the country.  Don’t put up with it where you live.

A.F. Branco has the same question as many of you:  Who are FPX’s puppet-masters holding him up or flying his drone? 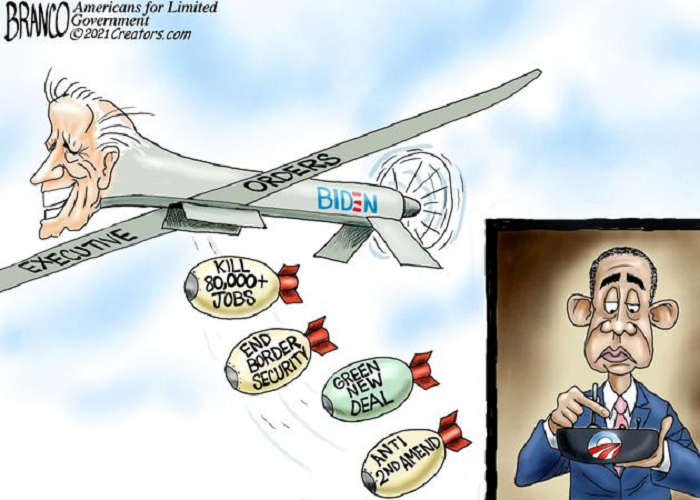 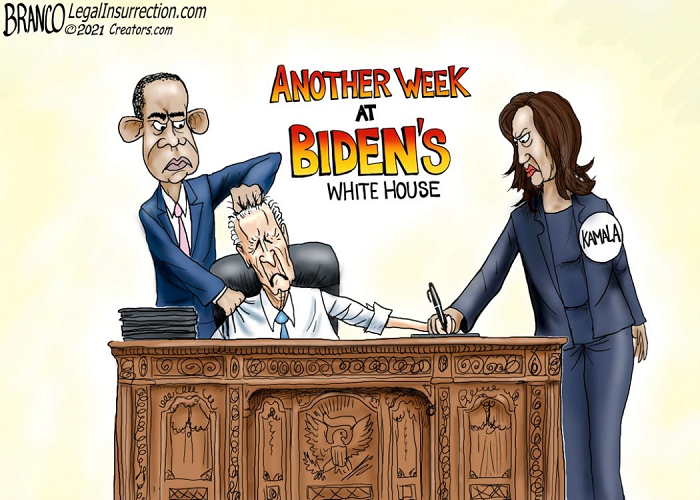 But not Heels Up. Here’s what a friend of mine tells me:

“The ‘Heels Up Harris’ is a nickname we gave Kamala when I was in the CA state legislature.  She was heels up or kneepads with Willie (Brown) and many others.  She was just a Democrat groupie-slut we would see hanging on various people at different political functions.  The fact that she is now, essentially, the acting president just blows my mind.”

But if it’s not her hand on FPX’s pen signing those EOs, whose is it?  A lot of different people, mostly with uber-leftie agendas but not all.  As Skye observed over a phone call:

“The FBI, DOJ, CIA, NSA, CDC, Pentagon, etc., are supposed to be under the control of the executive, the President.  But Trump himself showed that he had essentially no control over them – from James Mattis to Mark Esper, from Jeff Sessions to Bill Barr, from Jim Comey to Chris Wray, on and on.   Now under Xiden, they are fully autonomous. He will sign any directive they want.”

Right.  It’s been over 24 hours since the attack and the Xiden White House has made no statement whatever.  Folks, this Syrian sortie was ordered unilaterally by the Pentagon with no signoff by JoeBama.  It was a shot across the USS JoeBama’s bow not to screw with Pentagon funding, bombing some Iranian crazies into the Syrian sand was the pretense.

Further, there is obviously real worry behind the Branco ‘toon regarding Xiden’s mental faculties. When (2/24) Dozens of House Democrats want Biden to give up sole authority to launch nuclear weapons, that’s a pretty good indicator.

Which brings the question of when the Dems are going to pull the 25th Amendment trigger on FPX.  There were a number of interesting Forum speculations on who Heels Up would nominate for VP once she replaces Xiden, such as Michelle O or Susie Rice.  But whomever, it almost has to be before the next Congress is seated on Jan 3, 2023.

That’s because of Section 2 of the 25th Amendment:

“Whenever there is a vacancy in the office of the Vice President, the President shall nominate a Vice President who shall take office upon confirmation by a majority vote of both Houses of Congress.”

Upon that date above little more than 22 months from now, it’s a good bet the GOP will be the majority in both Houses — so Heels Up has to nominate someone they will approve of.  So it’s likely we’ll see JoeBama outta there before very long.

Another reason is his clear deterioration.  Last week’s HFR noted the supposed date for his 1st SOTU was Tuesday Feb 23 – which came and went and still no date set because he’s in no shape to deliver it.

For the day before, Monday Feb 22, trying to commemorate those who’ve died from the China Virus, he uttered this gem:

He seems to be saying:

But no one knows what this means.

Here’s a Newsmax/Sky News Australia report on how Xiden’s Mental Decline Is Obvious Around the World:

On Sunday (2/21), reading his teleprompter speech to the UN Security Conference in Munich, he got so confused he actually said the N-word so clearly it was recorded by close captioning: 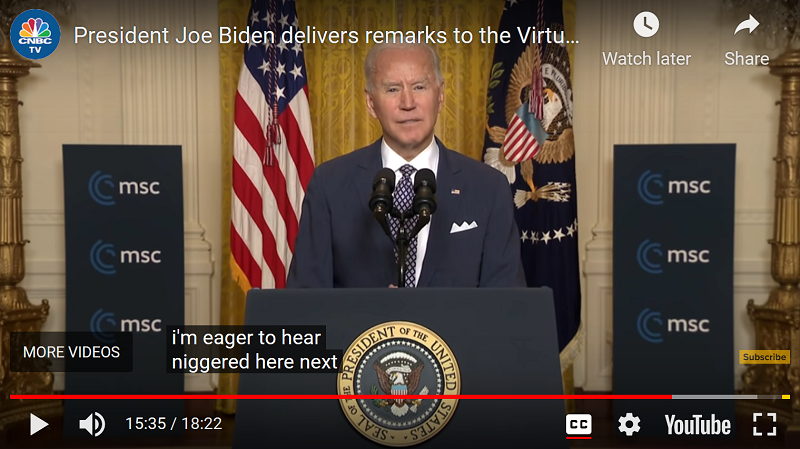 If you watch any length of the speech – video here – you’ll be embarrassed that it is spoken with the lack of energy of a weak old man phoning it in.  Compare it to the dragon energy of the Real POTUS — and you’ll see a pathetic pretense to be a World Leader.

And of course a pathetic pretense as a Fake Thieving Illegitimate President of the United States.

TTPer Gary Blackman of the Forum asked in frustration, “Where are the Governors to oppose, refuse, and nullify unlawful orders from an illegitimate regime in DC?”

They’re out there, Gary – albeit from smaller population states, like Kristi Noem in South Dakota and Greg Gianforte of Montana.  The guy to watch, though, is the best and ballsiest gov in America – Florida’s Ron DeSantis. Read his Wiki bio in the link – it’ll blow you away.

Earlier this month, there was this: White House looks at domestic travel restrictions as COVID mutation surges in Florida.  This was DeSantis’ public response:

“Public” because there was also a private phone conversation DeSantis had with Xiden that got heated.  In fact, it got so white hot that when DeSantis kept calling FPX “Joe” as he had known him for years wanting to keep their call friendly, and FPX responded with an imperious demand he be addressed as “Mr. President,” DeSantis exploded: “No!” was his answer, followed by “Go F yourself!” – and hung up.

As usual, Skye’s Links this week (2/25) contained a cornucopia of insights and info.  One in particular was striking:

Tech Entrepreneur: ‘A Second Internet Is Needed for American Survival’

This is by Martin Avila, founder and CEO of Right Forge, which has this Mission Statement:

“In 2021, organizations supporting original American values, such as those enshrined in the bill of rights, can no longer be agnostic with the various technology services that they depend upon. We are being held captive by technology companies whose leadership and employees are diametrically opposed to our own principles and values. We’ve built the foundation of Internet services that are free from Big Tech.”

Yes, he really is building a Second Internet to outcompete the one we have now controlled by the Hate America Fascist Corporatist Big Tech Left.  Read his article above, see how you or your company can do business with him, and send your prayers for him to Providence.

Martin Avila is the HFR Hero of the Week.

We’ll close with this marvelous moment of Senator Rand Paul destroying tranny Richard Levine who pretends he’s a woman named Rachel.  He is also FPX’s nominee to be Ass’t Secretary of Health. Levine is criminally insane in his advocacy of pre-teen surgery to remove sex organs.  Senator Paul accurately compares this to the horror of the genital mutilation of Moslem infibulation.

There are honest and decent people with integrity in Washington.  Not many, but they do exist and they give us hope. Thank you, Senator Paul.