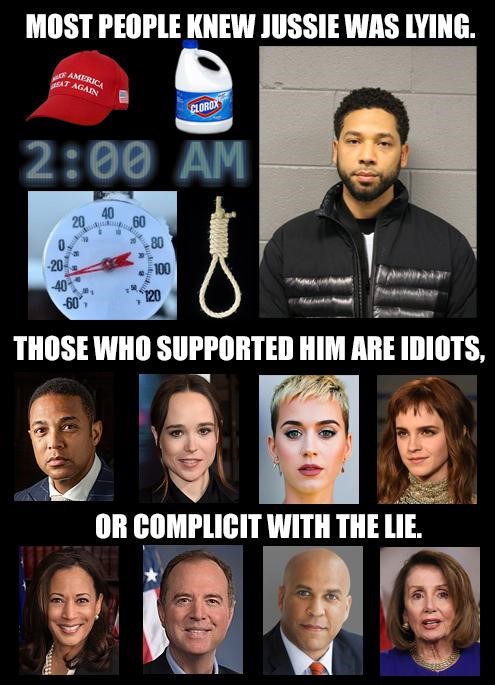 So, last May Roseanne Barr gets fired within hours by ABC after SJWs freak out condemning one single short tweet as “racist” (which it wasn’t, she was ridiculing ValJar’s looks, not her race, thought she was Saudi, not black).

And what do we wake up to this morning with the huge lead headline on Drudge?  A disgustingly obscene photo of a disgustingly depraved Trump-hating scumbag who was arrested yesterday (2/21) for his disgusting crime linking to this story: Jussie Smollett Returns to ‘Empire’ Set as Fox Struggles to Decide His Fate.

“Struggles”?  The evidence of Smollett’s hoax is overwhelming.  The retard wrote a check to pay his two accomplices staging his phony MAGA attack.  The two perps have confessed.  Fox pretending to be a conservative media company is as much a hoax as Smollett.

“I’m left hanging my head and asking why? Why would anyone, especially an African-American man, use the symbolism of a noose to make false accusations? How could someone look at the hatred and suffering associated with that symbol? How can an individual who has been embraced by the city of Chicago turn around and slap everyone in this city by making this false claim?”

The noose is the key to all of this.  Take a look at this picture: 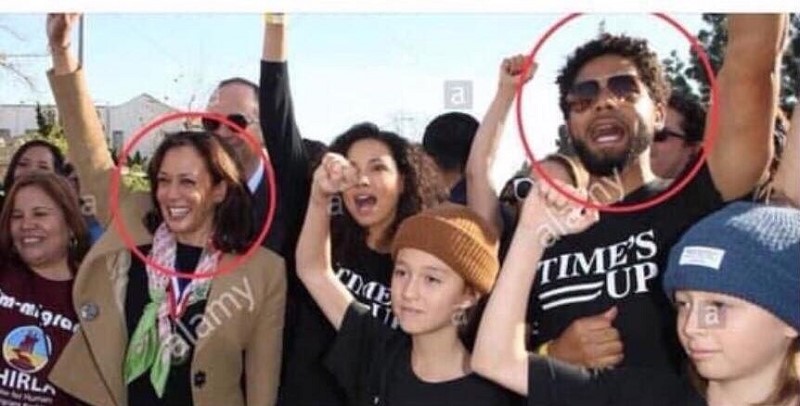 That’s Smollett joining with Kamala Harris in a rally for her pet cause of – be ready for it – a bill to make lynching a Federal hate crime.

Lynching?  There’s a hate crime spree of lynching – by racist Trump supporters, natch – going on in America today?  Who knew?  There hasn’t been a lynching anywhere in the US for more than 50 years.  Yet Kneepads Kamala – aka #HorizontalHarris – to build her creds with black voters in prep for her presidential candidacy introduces her Justice for Victims of Lynching Act of 2018 (S.3178) last June.

During the lame duck session of the 115th Congress after the election, she finally got a Senate vote and won by unanimous  Voice Vote (no roll call) in December.  But the House didn’t vote, so her bill died.

With the 116th Congress in session, here’s the timeline:

Jan 21: Harris announces  her presidential candidacy, with her official campaign slogan “For the people.”  It’s impossible to be more trite than that.

Jan 29: Jussie Smollett reports to Chicago Police he was attacked at 2am in -20 degree cold by two white men wearing MAGA hats who beat his face, poured bleach on him, put a noose around his neck, and yelled, “This is MAGA country!”  He kept the noose around his neck during the report.  A 24/7 media frenzy ensues of “celebrity” and media support for Smollett, all blaming Trump for causing the “climate of racist hate” all of America is suffering.

Feb 14: Harris reintroduces her Justice for Victims of Lynching Act of 2019 – S.488. It is passed the very same day by Senate Voice Vote.  Not one single Senator objects to the legislative charade.

Feb 21:  Smollett arrested by Chicago Police for perpetrating a hoax by hiring two black extras on his “Empire” show to buy the rope for the noose at the Crafty Beaver hardware store on January 25, rehearsed the attack with a script, then conducted it the night of the 29.

Feb 22: Smollett is released on bail, maintains his innocence and says he “feels betrayed.”

And here’s the question now.  Smollett refused to turn over his cell phone to the police and gave them only “heavily redacted” records of his calls.  What calls to whom is he hiding?  Could they be to Kamala Harris in a planned conspiracy to help her anti-lynching bill pass?  Pretty easy for Chicago prosecutors to obtain his phone company records.

Smollett now faces going to jail for three years or more, and huge fines for his hoax.  How cool would it be if he fingered Senator Kneepads to get a lighter sentence?

Meanwhile, street artist Sabo just put up satire movie posters in LA – like the ones you see targeting Oscar award voters – ridiculing Smollett.  Here’s one currently on a park bench on Pico Blvd. 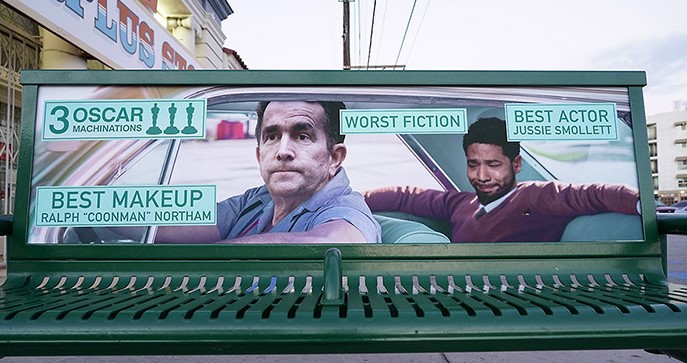 Same could be asked of every Dem Fascicrat and their Fake News sycophants.

Well, those Fake Newsers took in the shorts this week with lawyers for Nick Sandmann – the Covington High School student who stood his ground as some toothless toadbrain beat a drum and yelled in his face because he was wearing a MAGA hat – sued the Washington Post for $250 million in a defamation lawsuit.

What’s more, the lead attorney, Lin Wood, told Sean Hannity (video in link) that his team would be filing “hundreds of more lawsuits” against other media companies, and a host of Hollywood ilk.

The HFR hears that Wood will also be going after SJWs posting vile death threats on Twitter – and Twitter itself for allowing instead of banning them.

Further, the lawfare being waged – for once and at last against the Fascist Media – shouldn’t be confined to media companies but needs to target individual journalists and TV airheads who knowingly and deliberately defamed a 16 year-old boy.  The only way to shut the Lying Swine up is to bankrupt them.  Bankrupt them all and individually.

It took an extraordinary amount of courage and emotional intelligence for Nick to stand his ground when confronted by a crowd of racist weirdos, to stand his ground on national television refusing to apologize or be intimidated, and to launch these lawsuits against the most powerful propaganda apparatus the world has ever seen.  At age 16.

Once again, Nick “Stand Your Ground” Sandmann is the HFR Hero of the Week. 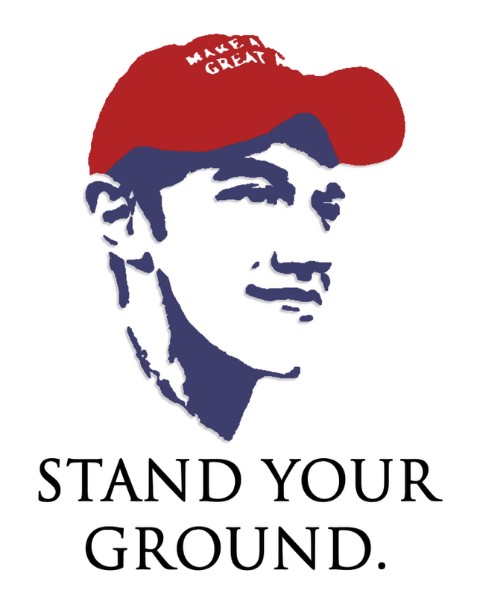 Hey, it’s freezing cold just about anywhere right now – how about we go to Miami? 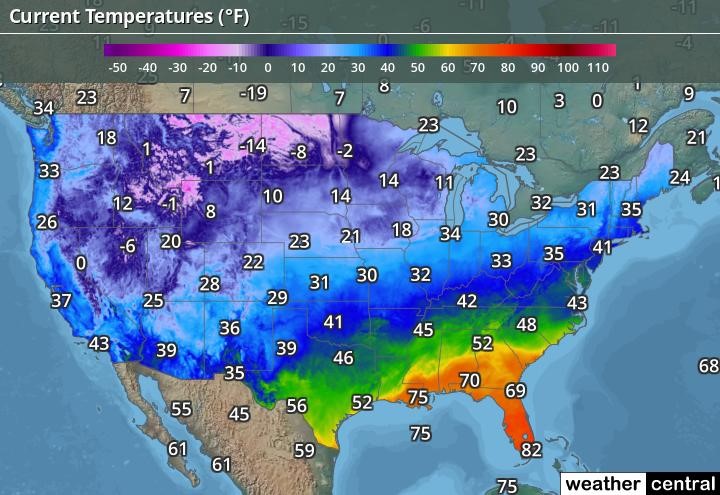 That’s where POTUS and FLOTUS were on Monday to deliver an extraordinary address to the Venezuelan community in Florida.  The reception they received was just as warm as the weather.  It’s genuinely thrilling to hear their words – and to witness what is happening now in South America.

For the first time ever a majority of South American countries have a conservative pro-free market pro-US government – Colombia, Peru, Chile, Argentina, and of course now in Brazil with Jair Bolsonaro.  The Marxist holdouts like Ecuador and Bolivia are being ignored.  Trump is now targeting the collapsing Communist government of Venezuela.

After it falls – which it will within weeks – POTUS’s next bullseye will be placed on Communist Cuba.

This scares the New York Slimes so much that it has recently started warning that Florida Is Becoming Dangerous Territory for Democrats (2/10).

“President Trump is pushing Mr. Maduro to step aside, and if he succeeds, Democrats fear it could transform Venezuelan-Americans into loyal Republicans, much like Cuban-Americans.”

And more, for it’s a marvelous opportunity for POTUS to point out what has happened to Venezuela is exactly what all the Marxist Fascicrats like Bernie, Warren, Harris, Booker, the whole looney lot, want to do to America.

So I encourage you to read the full text of  Remarks by President Trump to the Venezuelan-American Community, and enjoy watching FLOTUS give a charming intro (and meaningful for she grew up in a Communist country), then POTUS himself.  Here’s one quote to get your juices flowing.

Not long ago, Venezuela was the wealthiest nation, by far, in South America.  But years of socialist rule have brought this once-thriving nation to the brink of ruin.  That’s where it is today.

The tyrannical socialist government nationalized private industries and took over private businesses.  They engaged in massive wealth confiscation, shut down free markets, suppressed free speech, and set up a relentless propaganda machine, rigged elections, used the government to persecute their political opponents, and destroyed the impartial rule of law.

In other words, the socialists have done in Venezuela all of the same things that socialists, communists, totalitarians have done everywhere that they’ve had a chance to rule.  The results have been catastrophic.

Almost 90 percent of Venezuelans now live in poverty.  In 2018, hyperinflation in Venezuela exceeded 1 million percent.  Crippling shortages of food and medicine plague the country.  Socialism has so completely ravaged this great country that even the world’s largest reserves of oil are no longer enough to keep the lights on.  This will never happen to us.”

Are you listening, Miss Occasional-Cortex, Miss Kneepads, Mr. Spartacus, Miss Pocahontas?  You all should watch this carefully, as he speaking to you too. 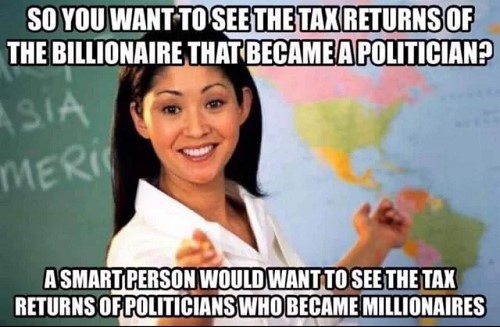 How retarded?  I have to admit, the best explanation is what I wrote 15 years ago in the early days of TTP.  I could not encourage you more to read it now.  From February 19, 2004:  WE OWE US – THE REAL CASE FOR REPARATIONS.  An excerpt:

“The bottom line is that the substantial majority of black people in America are only partially black. They are also partially white, and are so because they are of mixed white slave-owner and black slave owned ancestry.

Blacks owe reparations to themselves. The chant and battle cry of Millions for Reparations is “They Owe Us!” The truth is that the demand of the reparations movement should be: “We Owe Us!”

Let us hope that this reductio ad absurdum will help bring reparations advocates to their senses. For the bald truth is that the reparations argument is fascist thuggery run amok.”

After eight years of Obama and two years of Deep State-Democrat-FakeNews treason against the President, America is up to its eyeballs in fascist thuggery run amok today.

Perhaps nowhere has that been more obvious than the Mueller Witch Hunt, designed to complete the Comey-Clapper-Brennan-McCabe coup attempt against a duly-elected president, and to cover up the wholesale criminality of his opponent.

This week we learned that the Witch Hunt is coming to an end next week, with Mueller unable to find any evidence of Trump-Russia “collusion.” Ereyesterday (2/20), WaPo began preparing libtards for disappointment.  It’s key observation:

“None of the Americans charged by Mueller are accused of conspiring with Russia to interfere in the election. Determining whether any Trump associates had plotted with the Kremlin in 2016 was the central question assigned to Mueller when he got the job, in a moment of crisis for the FBI, the Justice Department and the country.”

Sure enough, Kim has written a classic in today’s WSJ: Schiffting to Phase 2 of Collusion.  A must-read it is.  An excerpt:

“So, no apologies. No acknowledgment that Mr. Schiff & Co. for years have pushed fake stories that accused innocent men and women of being Russian agents. No relieved hope that the country might finally put this behind us. Just a smooth transition—using Russia as a hook—into Mr. Trump’s finances. Mueller who?”

Normal America is in a fight for its life against the Deep State-Democrat-Fake News Fascisiti.  It is literally a fight to the death for a Normal America or an American Venezuela.

There is a famous scene in the original Star Wars, where a holographic Princess Leia pleads, “This is our most desperate hour.  Help us, Obi Wan Kenobi.  You are our only hope.”

Right now at this moment and for the next 18 months until November 5, 2020, this is America’s most desperate hour.  We have our Obi Wan Kenobi, our only hope.  On his success rides the fate of our nation.